As development partnerships go, Platinum Games and Activision look like strange bedfellows on paper. The latter is a publishing giant whose massive income is based around three major IPs (we’ll give the newly rebooted Guitar Hero Live a little room to run before including it on the balance sheet) and who has a reputation for shuttering studios that don’t produce the goods (read: massive sales). The former is an Osaka-based studio bristling with talent that seems to specialise in making games that:

Chuck in The Transformer IP, and this cocktail becomes all the more confusing. The Hasbro toy line has had a chequered past in gaming to say the least. With the exception of the two Cybertron instalments made by High Moon Studios, Optimus Prime and his pals haven’t really starred in all that many games worth buying. The games themselves usually sell by the truckload – such is the power of The Transformers brand – but the quality control is all over the radar. For every Transformers: War For Cybertron there are at least two Michael Bay movie tie-in games that blow. Big time. 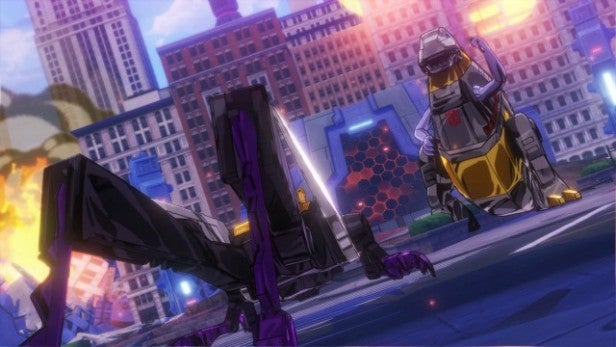 Platinum Games has taken steps to eradicate the Bay movies from the minds of long-time Transformers fans  with Transformers: Devastation’s presentation. The game looks and sounds like the animated Generation 1 series from the 1980s, albeit with a gussied up anime sheen. The original actors have been tapped up for voice-over duties – yes, Peter Cullen and Frank Welker are providing the voices for Optimus Prime and Megatron respectively – and the characters themselves are faithfully represented – no, Bumblebee is not an obnoxious American muscle car.

Transformers: Devastation throws players a bit of a curveball in that Platinum Games has opted to go against the established developer practice of constructing a Transformers game as a shooter. Instead, Transformers: Devastation is a brawler – and pretty damn good one at that. It’s also shot through with the traditional Platinum Games promise that it’ll satisfy the hardest of the hardcore by being eye-wateringly difficult to master, but we’ll get to that in a minute. 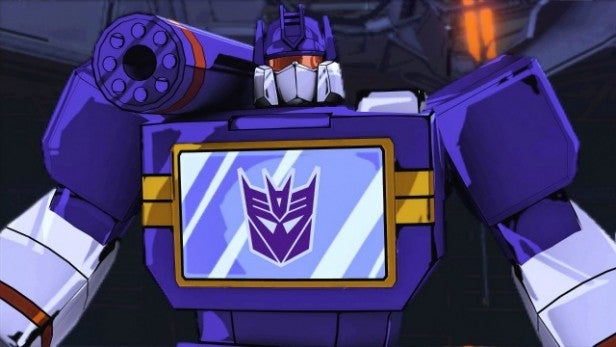 There are certain aspects in Transformers: Devastation that hint that the game may have been made on a relatively small budget. The mini-sandbox the players are let loose in isn’t exactly massive, the player will wade through armies of identi-kit Decepticon foes and Platinum has even lifted a couple of mechanics from its own back catalogue – most notably the ‘Focus’ mechanic, which is pretty much a carbon copy of Bayonetta’s ‘Witch Time’ ability. The game is also pretty short, clocking in at around six hours in the campaign and offering little to tempt players back besides bland challenge modes.

The plot isn’t exactly brilliant either, but hey, that shouldn’t come as a great surprise since this is a Transformers game. The only thing players need to know about the narrative going in is that the Decepticons are bad, the Autobots are good and anything bad needs to be smashed to pieces. Simple really. 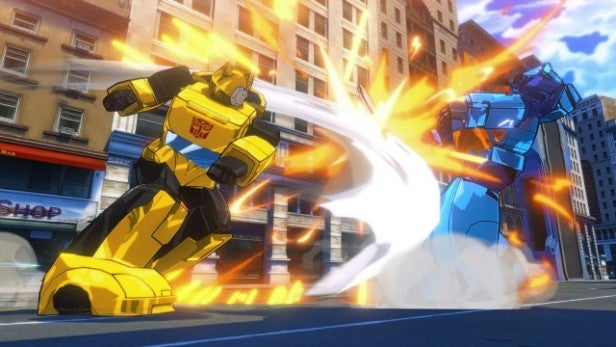 Where Transformers: Devastation excels in the combat, which once again, shouldn’t be too surprising, because hey, this is a game made by Platinum. It’s a fast-paced, stylish affair that puts a premium on light/hard combo attacks, which open up special moves if properly executed – for example, allowing players to transform their Autobot mid-air and ram them into their enemy.

The attacks aren’t limited to kicking and punching, mind; players gain access to a pretty wide array of hammers, swords, gauntlets and there’s also gunplay involved – although the melee combat is so fast and frenetic, you’ll probably find that you barely use it. As with most of Platinum’s games, the player’s enjoyment hinges on how willing they are to completely give themselves over to it, which involves fiddling around in the menus, learning the moves, strengths and weaknesses of all five of the Autobots on offer and then experimenting with them at length. 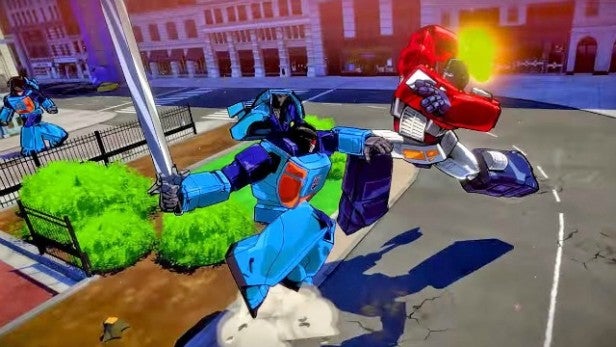 We mentioned earlier that Transformers: Devastation is aimed at hardcore gamers – and it is – but that doesn’t mean that players can’t dial down the difficulty if they don’t fancy a white-knuckled challenge. That having been said, even on the easiest setting, Transformers: Devastation is a button-masher; you can’t spam the same small array of attacks and expect to get anywhere and the game will award you with a lousy grading every time if you try it.

The Boss Battles are uniformly hard. They usually pit the player against one of the more iconic Decepticons – like Megatron or Shockwave – and then proceeds to give the AI controlled behemoth a ton of health and astonishingly damaging attacks. Even if you’ve mastered the timing and rhythm required to make inroads into their health meters, the Boss Battles mostly come across as brutal wars of attrition. Some might say that this makes conquering them all the more sweeter, while others will gaze down at the controller in their hands and marvel at the fact that they resisted the urge to smash it against the floor.

Verdict
Transformers: Devastation is essentially fan-service. Only Transformers fans would have the patience to persevere with the repetitive enemies, the arduous Boss Fights, the fiddly customisation and the levelling system that only really rewards players who stick with one Autobot throughout the campaign. Admittedly it’s pretty good fan service – the best since War For Cybertron – but if you neither interested in deep brawlers or someone who can tell their Arcee from their elbow, you might be forgiven for wondering what all of the fuss is about.