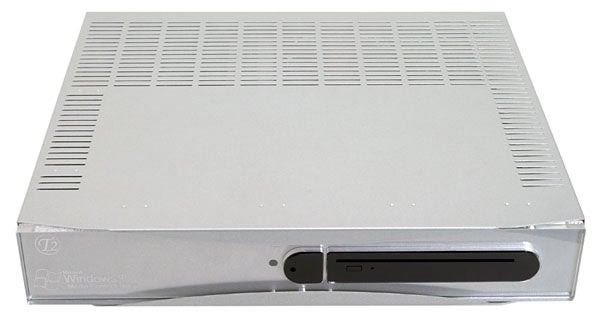 A few weeks ago I looked at the E2-MCE Media Center PC from Hush Technologies. Now I’m looking at another totally silent Media Center box, this time from Tranquil PC. The Tranquil T2.e is a slightly different beast to the Hush machine, but the overall principle is the same – it’s a PC that’s doing its best to look like a piece of AV equipment so that it can blend into your living room rather than an office.


The Tranquil is definitely a smaller machine than the Hush, but that doesn’t come as a huge surprise when you look at what’s inside. Instead of going for an Intel Pentium 4 based solution, Tranquil has chosen a VIA C3 based platform. This means that the motherboard is tiny, allowing for a much smaller system case.

Tranquil has definitely done its best to make the system case look good. The main body has a brushed aluminium finish, while the front fascia is constructed from a one centimetre thick slab of transparent perspex. Embedded in the perspex is the power light and there are no prizes for guessing what colour it is – yep, that’s right, it’s blue. I wonder if Sony will use a different colour light for the PlayStation 3 and whether the entire technology world will copy the design once more.


Embossed into the rear of the clear fascia on the left is the a large Microsoft Windows XP Media Center Edition logo. I’m not sure whether this is what you’d want to see on a device sitting in your AV rack, but it does glow blue, along with the T2 logo sitting just above it.

Embedded in the perspex fascia is a slot loading DVD writer which will burn to DVD-R/RW and CD-R/RW media. Next to the optical drive is the power button, along with the infrared receiver for the Media Center remote control.


There’s not as much solid aluminium on show as there is with the Hush, with much of the case looking like any other low profile PC chassis. However, the right hand side of the case is constructed from a solid billet of aluminium and finished with a similar fin effect to that seen with the Hush. Unsurprisingly, the heatpipes from the passive CPU cooler are routed to the right hand side of the case, allowing the fins to efficiently dissipate the heat.


The hard disk enclosure is flanked on two sides by large, finned heatsinks as well, but since these are inside the chassis, the heat is still trapped in the case – albeit being drawn away from the drives themselves. The review unit came with a single 160GB IDE hard disk, but there is room for a second drive, which could come in handy if you let all those TV recordings start to pile up. 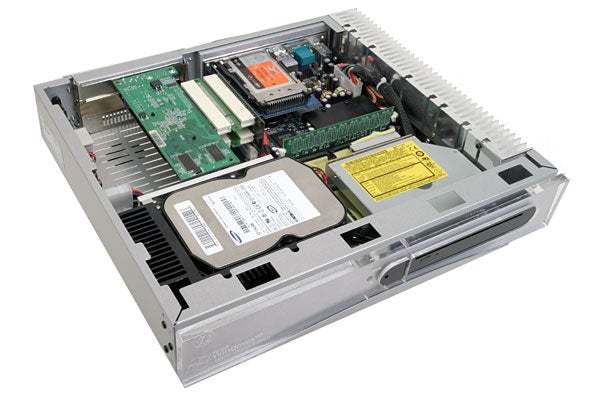 The Mini-ITX motherboard only has a single PCI expansion slot, but Tranquil has employed a riser card to allow for two cards to be used as well as keeping the profile of the case as low as possible. One of the PCI slots was filled with an nVidia GeForce FX5200 graphics card with 128MB of RAM. Although this card only sports D-SUB and S-Video outputs, Tranquil has assured me that production units of the T2.e will ship with DVI support.


The second PCI card is the TV tuner and Tranquil has been smart enough to include a DVB card. Not only will a digital TV tuner provide you with a better image, but it will also give you access to all the free-to-air digital channels that are available. Tranquil also informed me that a dual DVB tuner will be available as an option soon which will take advantage of Media Center 2005’s dual tuner support. With two tuners you can watch one channel while recording another, or even record two channels while watching pre-recorded content. 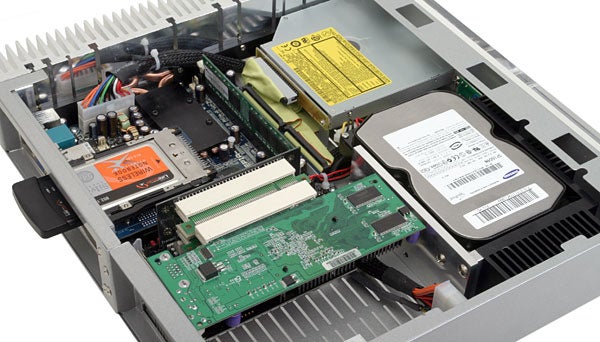 Tranquil has filled the single DIMM socket with a 512MB DDR module, but the motherboard will support up to 1GB of memory. Of course if you want more memory you’re going to have to specify it at purchase unless you want to have to discard the 512MB module – also 1GB modules are still pretty pricey.

You also get a card reader at the rear which accepts CompactFlash and more importantly PC Cards. The latter can be used with the optional PC Card WiFi adapter – this is definitely an option that’s worth investing in, because if there’s one thing that a Media Center PC needs, it’s an Internet connection. Not only is an Internet connection necessary for the Electronic Programme Guides, but it will also allow you to make use of the Media Center Online Spotlight services. The former will allow you to make sure you record your favourite programmes, while the latter will give you access to online services tailored to the Media Center environment.

So what is the Tranquil T2.e like in use? Well it looks good, but nowhere near as good as the Hush. Also, the fanless design is less of an achievement considering the hardware platform that it’s based on. Add to this the fact that the T2.e uses an external power supply, which means that Tranquil didn’t have to worry about the heat created by the PSU. But I’m not trying to take anything away from Tranquil’s engineers – they set out to build a completely fanless Media Center PC and did just that.


What Tranquil has done with the T2.e is prove something that I’ve suspected for a very long time – that you don’t need particularly powerful hardware in order to make a decent Media Center PC. Running the T2.e through all the duties that would be expected of a Media Center PC, it performed very well indeed. Whether you’re watching TV, recording TV, watching a DVD, streaming video or time-shifting video, the T2.e doesn’t miss a step. 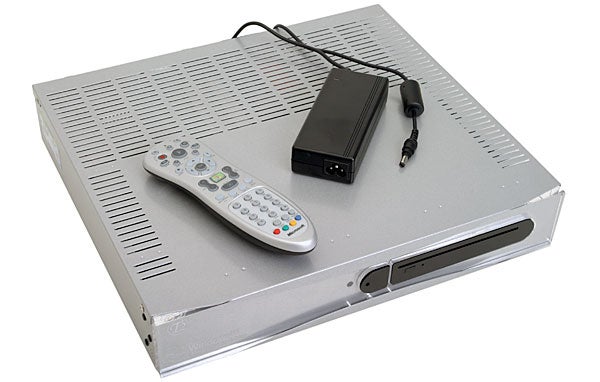 That said, I did hit the limits of the hardware when I tried playing back some WMV9 High Definition Video content. The T2.e struggled to keep up any kind of frame rate when playing back HD video – this is probably due to a combination of modest CPU power and a lack of HD acceleration on the graphics chip.


So, the Tranquil T2.e isn’t quite as stylish, well built or downright desirable as the Hush, and the hardware does limit HD video playback, but it does have one very important factor in its favour – price. With a base price of £938.83 including VAT, the Tranquil is just over half the price of the Hush, making it a much more affordable prospect. 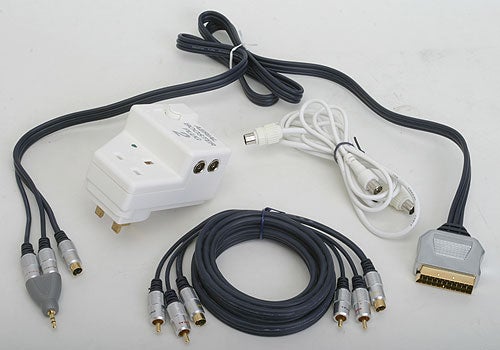 Unfortunately, despite the price difference, I would still bite the bullet and give my credit card number to Hush. The Tranquil is a great little Media Center system at a great price, but the Hush is a design master piece. But it’s not just looks and build quality, the Hush also has key features that are missing from the Tranquil, like integrated WiFi and front mounted USB, FireWire and audio ports.


The T2.e is tantalisingly close to being a great Media Center PC, but it needs a little bit of work here and there. There’s no doubt that HD video content is going to become more prevalent in 2005 and any Media Center PC needs to be able to handle the format. Some front mounted ports would be useful too, allowing you to connect up your digital camera, camcorder or even a memory card reader. Ultimately though, if you can’t afford the Hush E2-MCE, the Tranquil T2.e is reasonably priced alternative.


Tranquil has managed to create a totally fanless Media Center PC at a very attractive price. The choice of hardware means that HD video is off the menu, and it’s lacking some front mounted connection options, but on the whole, the T2.e is nice little machine that would look good in any living room.