Easy to set up and to use, the TP-Link Tapo L530E Smart Wi-Fi Light Bulb Multicolour is a decent smart bulb. The Tapo ecosystem does lack some of the features available in Kasa, though, so it's strange that there isn't more of a price difference between the Tapo L530E and its Kasa equivalent. If you're already committed to Tapo, or if you're new to smart devices and aren't bothered about geolocation, SmartThings or IFTTT, this is still a good choice where you need just the occasional bulb.

The Tapo L530 is a smart bulb that offers various levels of brightness and colour. It’s available with either an Edison screw (L530E) or bayonet (L530B) fitting – I tested the former – but both bulbs are otherwise identical. You can use the Tapo app to manually adjust the power and hue, or create schedules to do it automatically. This bulb connects to your existing Wi-Fi network, so you don’t need a special starter kit.

You can’t control it with TP-Link’s more fully featured Kasa app, however, plus it’s lacking IFTTT or Samsung SmartThings support. Nor does this bulb have any wireless light switch options, making it a better choice only where you need a single bulb or two.

TP-Link Tapo L530E design and features – Quick and easy to get set up, but this bulb lacks some advanced features

Installing the L530E is literally as simple as unscrewing your old bulb, and replacing it with the new one. Turn the fitting on and the bulb will flash three times when it’s ready to be connected to the Tapo app. That’s far easier than the tricky steps you have to go through to get the Hey! Smart Bulb connected.

The next job is to sign up for a TP-Link account, if you don’t already have one. You’ll need to provide location permissions so the app can get appropriate sunrise and sunset times for scheduled actions. Sadly, this is a one-off step – you can’t use trigger automatic actions for Tapo devices based on your location, such as turning a light on when you come home. 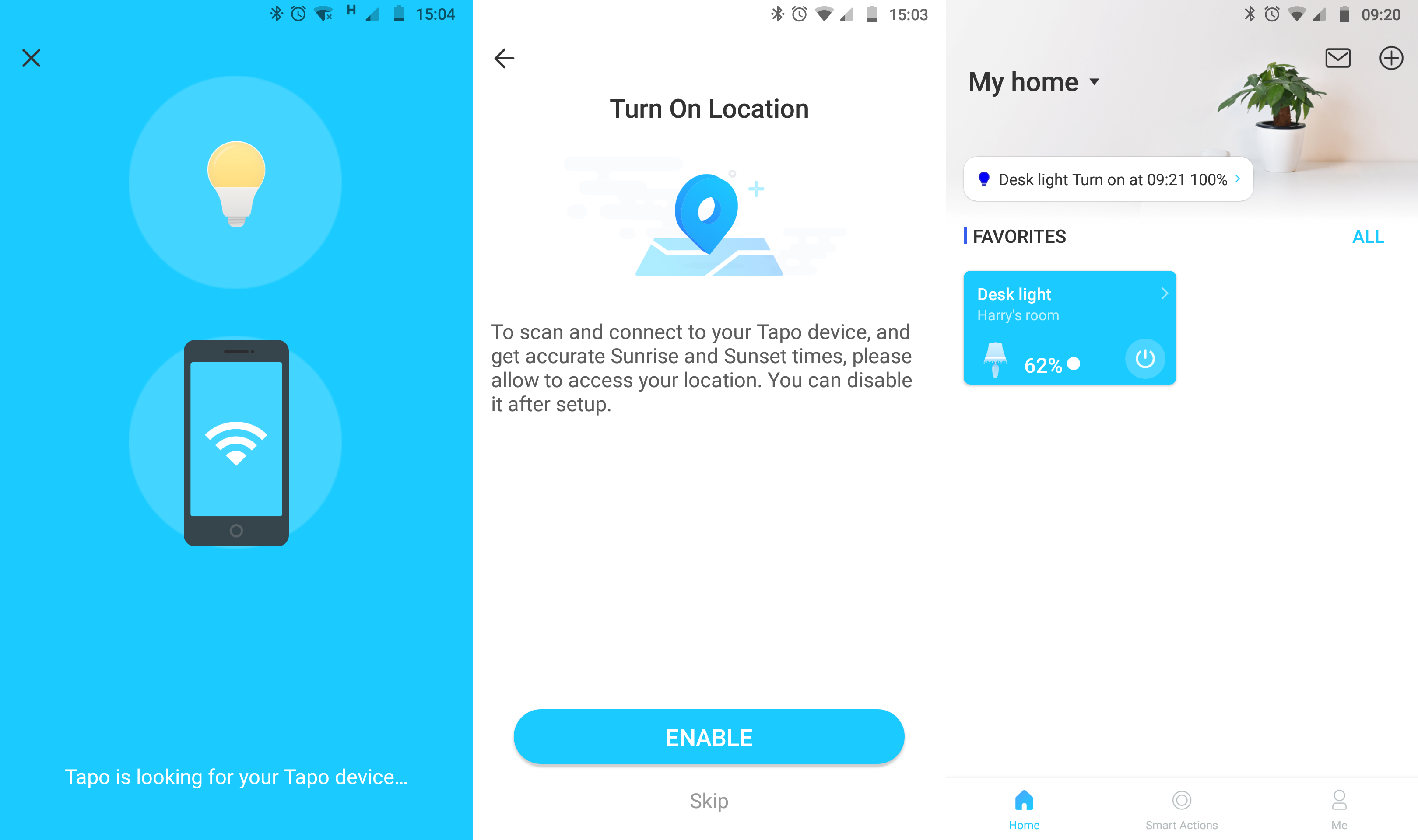 Clicking the plus sign in the Tapo app lets you search for new devices by category. Follow through the process and the bulb appears on the front page of the Tapo app, ready to use.

Fire up the Tapo app and you can toggle the bulb on and off from the small power icon on its tile. Tapping elsewhere in the tile opens up a more detailed page where you can tap one of several preset colours, and slide up and down on a big bulb icon to change its brightness. Changes are usually instantaneous – but, occasionally, I experienced a second or so of delay between command and action. That’s the downside of using Wi-Fi rather than a dedicated smart home protocol such as Thread, which powers the Nanoleaf Essentials series.

To get more exacting control of the bulb’s hue you need to edit one of the presets, by tapping it twice. This opens a pinwheel interface where you can drag the pointer to exactly the shade you’re after. 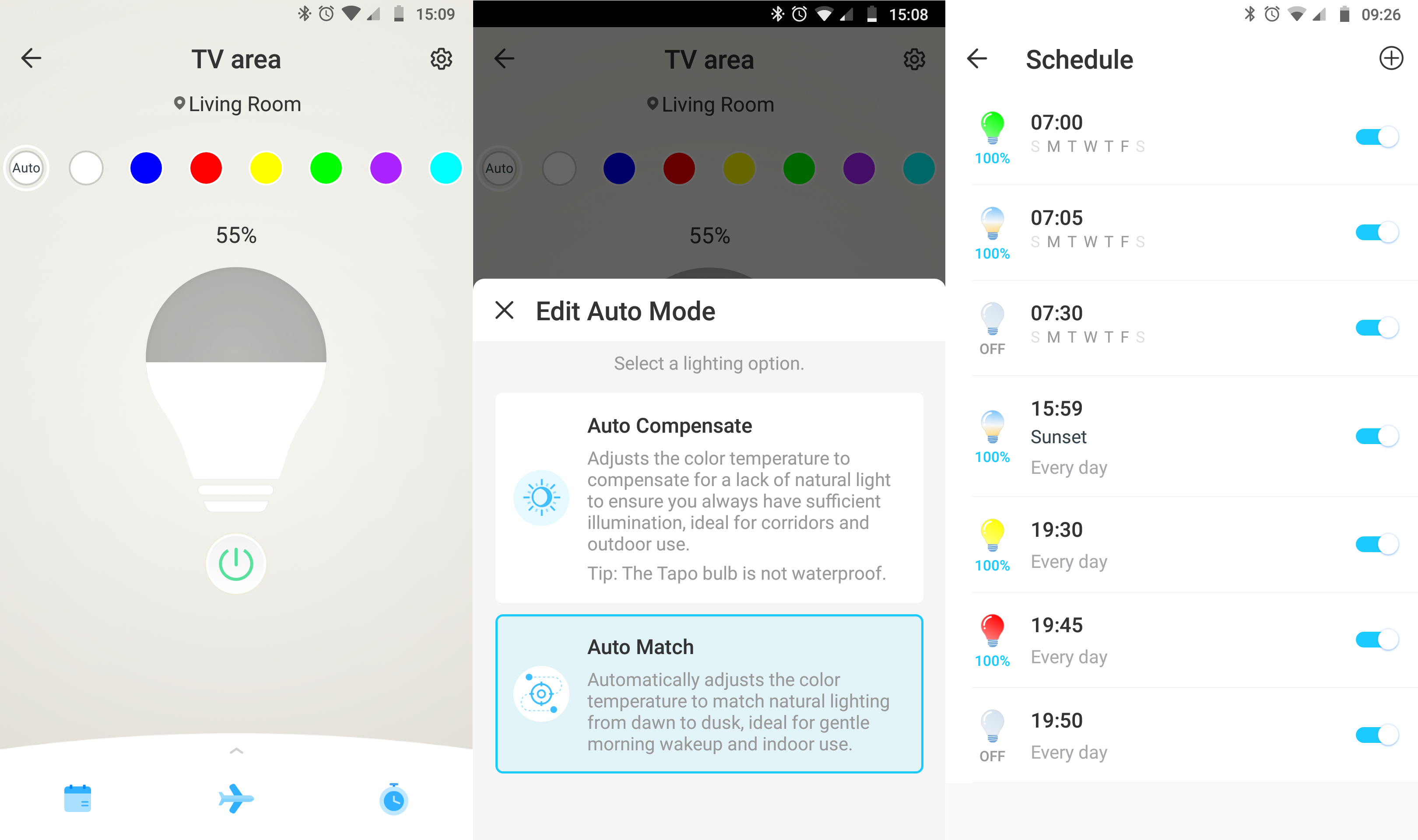 The Tapo app lets you schedule one or more actions triggered at a time, or by sunset or sunrise. You can also schedule an Away mode to toggle the light randomly. Swipe up on the Details page and you can see a handy tally of how long the bulb has been operating, and how much energy it has used.

The Tapo L530E comes with support for Amazon Alexa and Google Assistant, but it doesn’t connect wider, and there’s no IFTTT support or SmartThings integration. More crucially, there are no dedicated wireless light switches or controls, so you have to use your voice or the app to turn the bulb on or off, or to adjust brightness and colour. This is a common restriction with Wi-Fi bulbs, but it’s a frustrating one: if you want to go all smart, then the Philips Hue range is more expensive but the line-up of physical controls makes it a better overall system.

While most of the colour choices are good, I found that the bulb’s yellow output had a notable green bias. Philips Hue bulbs offer far better colour reproduction and accuracy, and they’re brighter in colour mode, too.

For regular bulb use, the L530E is capable of outputting 806 lumens, which is around the same brightness as a traditional 60W bulb. That’s the same as Philips Hue bulbs, which are bright enough for all but the largest of rooms. 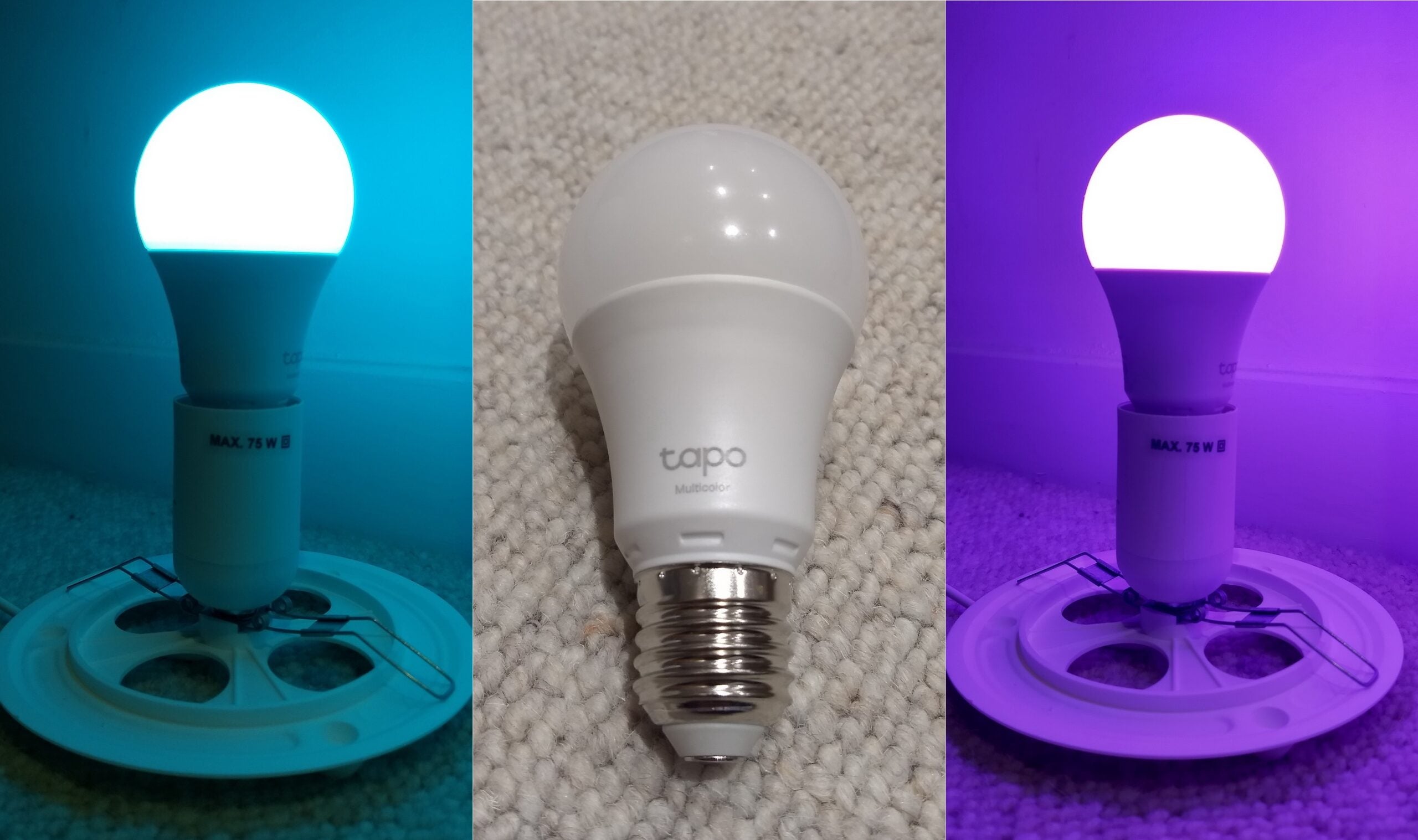 Should you buy the TP-Link Tapo L530E?

While it’s frustrating that the Tapo L530E won’t work with the TP-Link Kasa app, it’s nevertheless a decent choice if you want a smart bulb that’s simple and efficient. However, at the time of our review, this bulb was no cheaper than the equivalent in the Kasa range, which offers a greater number of features. And, the cheaper Hey! Smart Light Bulb is brighter and can integrate with the large Smarter Life range of products, making it a better choice if you only need a bulb or two. For kitting out your home with full smart lighting, we’d recommend the Philips Hue range.