The TP-Link RE365 is a great-value wireless extender. For under £50 it does a solid job of boosting Wi-Fi 5 connections, improving performance and coverage in the outlying areas of your home. It’s practical, too, with a passthrough mains socket at the front and a wired Ethernet connector at the side, plus a WPS button that you can use to get new devices online without having to type in a password. The web interface doesn’t offer much in the way of advanced management settings, however, and nor is the RE365 as fast as some pricier extenders. But if you just want to give your Wi-Fi network a bit of extra reach, it remains an effective, affordable solution.

Broadly speaking, the TP-Link RE365 works like any other wireless repeater. Plug it into a mains socket somewhere in your home and it starts broadcasting its own Wi-Fi signal to which nearby devices can connect. At the same time, it connects back to your router, and forwards traffic back and forth to your primary network as needed.

The RE365 supports W-Fi 5 (802.11ac) connections on both the legacy 2.4GHz radio band and the faster 5GHz band, but (as you’d expect for the price) it only has one 5GHz radio to handle both client and backhaul connections to your main router. That shouldn’t be a deal-breaker, but it means there’s less bandwidth available than you’d get from a high-end mesh system or a tri-band repeater such as the Netgear Nighthawk X4S.

TP-Link RE365 design and features – Cleverly designed, so you don’t lose a power socket

The RE365 is a stylish unit, with aqua trim and a hoop-shaped antenna that can be folded down for neatness or flipped up for optimum wireless performance. Measuring 77mm across, it’s unlikely to obstruct the item plugged in next to it, and it provides a passthrough mains socket, too – helpful for homes where wall sockets are at a premium.

Another convenience is the WPS button above the socket, which you can push to easily connect compatible devices to the extended network. An LED ring around it shines blue when there’s a good connection to the router; or red, if the repeater feels it’s too far away for decent performance. Four further LEDs on the left-hand side indicate network and power status. 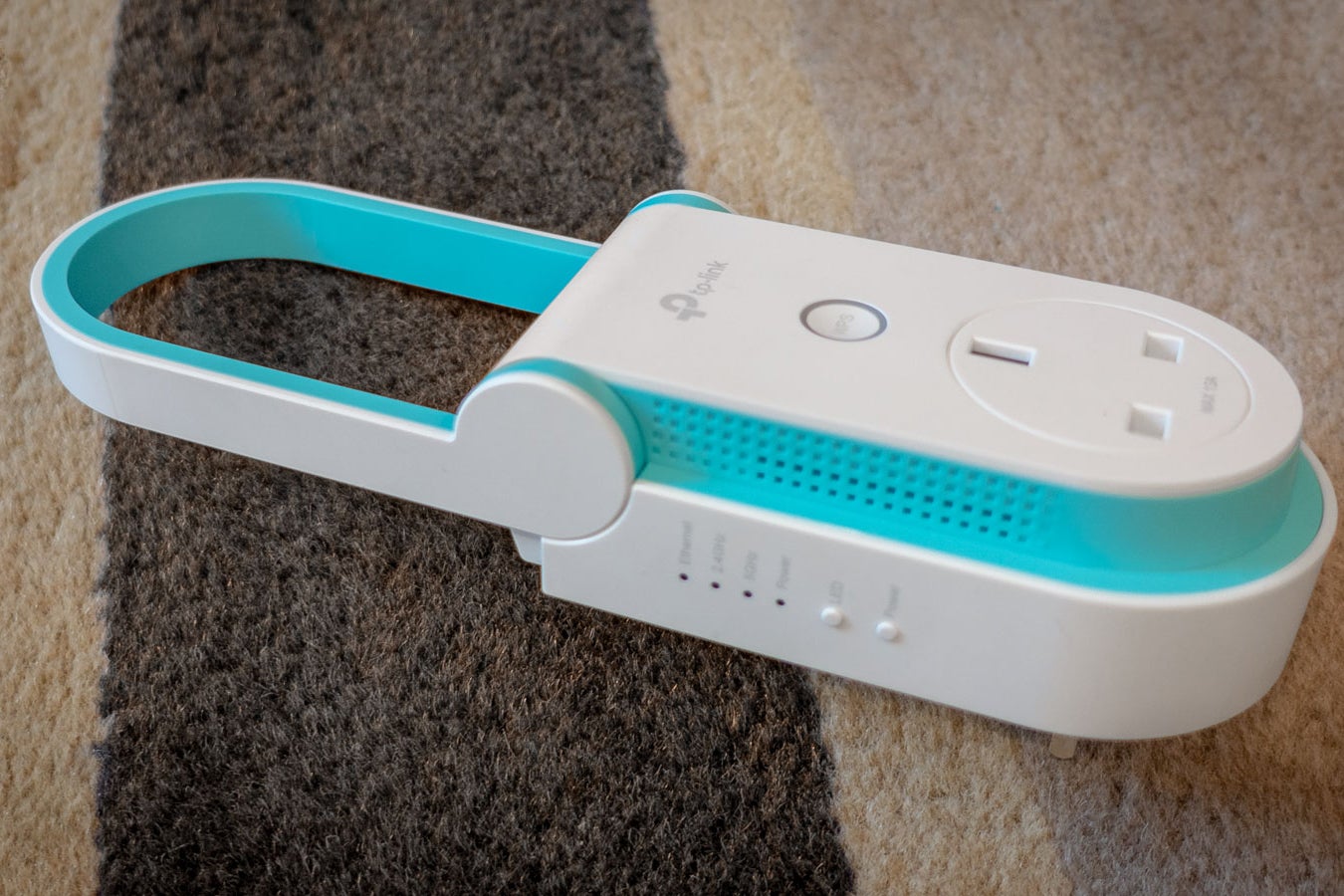 Finally, over on the right-hand side, an Ethernet socket that uses the slower 10/100Mbps standard rather than Gigabit lets you connect wired clients to the extended network. Or, you can use a cable to connect the RE365 to your router, turning the repeater into a general-purpose wireless access point. In this latter mode, you’re not relying on wireless to connect the RE365 to your router, so you may find you achieve better results and a more stable connection in some scenarios and homes. 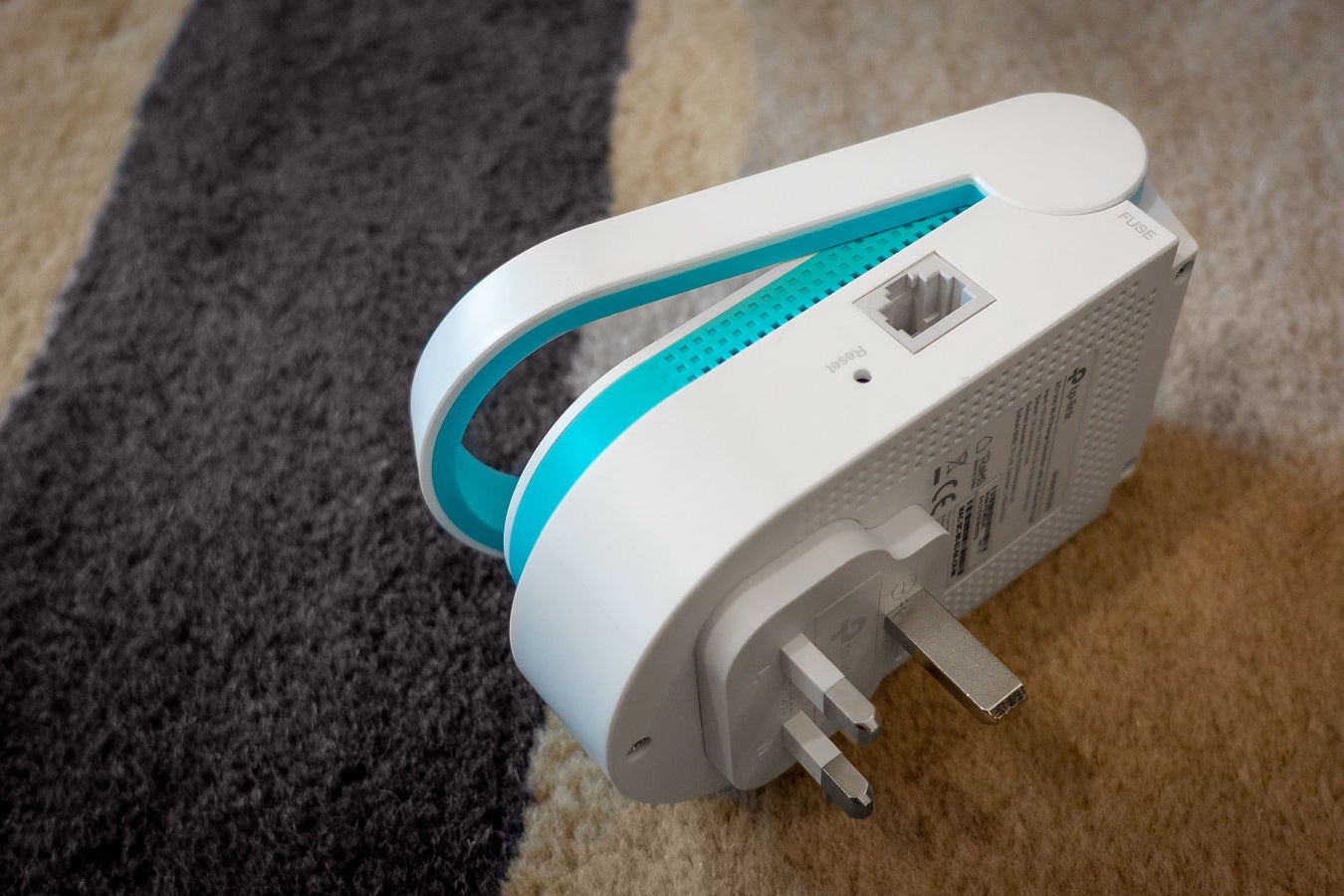 Overall, the physical design is simple but functional, and the same can be said for the RE365’s web portal. Here, you can set names for your extended 2.4GHz and 5GHz networks, or click a button to duplicate them from your router. You can also block individual devices from connecting, set the extended network to switch off and on according to a daily schedule, or just tell it to turn the LEDs off at night. In terms of configuration, that’s about it – but to be fair, it’s probably more than most customers will be looking for. 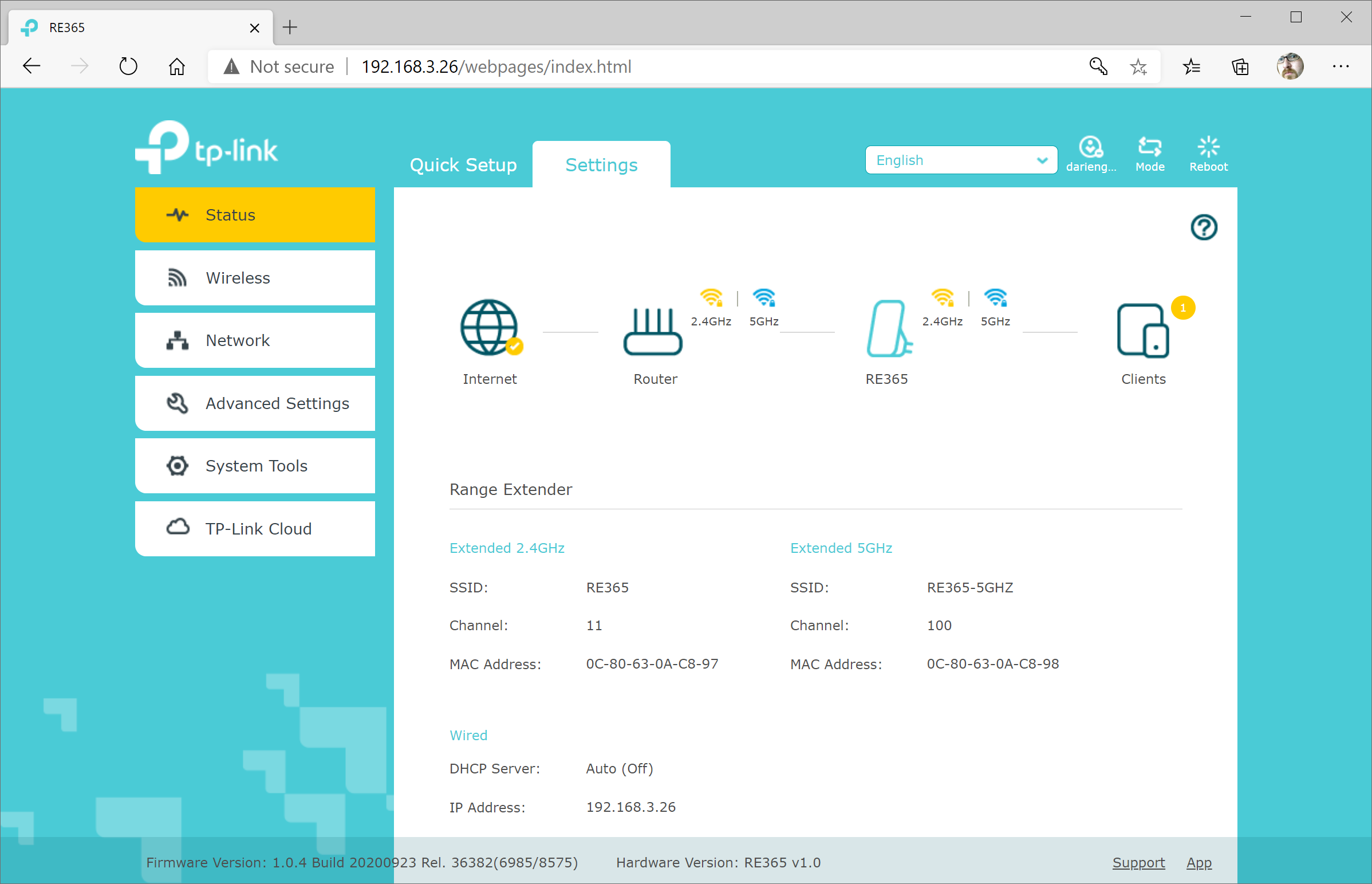 TP-Link RE365 performance – A decent boost to speeds and range

The RE365 supports only Wi-Fi 5, so it can’t match the very fastest speeds attainable by the latest Wi-Fi 6 hardware – and, as I’ve mentioned, its performance is further limited by the dual-band design. Even so, it can still provide a stronger, faster signal to faraway devices than achievable by connecting directly to the router.

I tested this using the free TamoSoft Throughput Test tool. Before installing the extender, I took my laptop out onto the terrace at the back of my home, connected to my router on the 5GHz band, and measured average upload and download speeds over a 60-second period. These came to 63.6Mbits/sec and 94.3Mbits/sec respectively.

I then installed the RE365 in a hallway in the middle of my house, connected via the extended network and repeated the test. This time, I saw speeds of 129.8Mbits/sec and 136.4Mbits/sec, which is a clear improvement.

A similar benefit was recorded in the bedroom. When connected directly to the router I saw an average download speed of 92.4Mbits/sec, while the RE365 accelerated this to a distinctly zippier 151.9Mbits/sec.

The best result were in the bathroom, where it’s usual for plumbing to severely hinder wireless performance. Downloads directly from the router hobbled along at a mediocre 42.6Mbits/sec; the RE365 was more than two and a half times faster, clocking an average 115.8Mbits/sec.

Those are very creditable numbers. They indicate that, if there’s a room in your home that’s near to the limit of your router’s wireless range, this repeater could easily turn a clunky, intermittent online experience into a smooth, swift connection.

If you’re looking for the best speeds around then you’ll need to move up to a more expensive solution – and the same applies if you want bells and whistles such as guest networks and parental controls. However, that doesn’t diminish the charm of the TP-Link RE365: this tasteful little repeater nails the basic job of boosting your network coverage for a price that’s almost irresistible.