What is the TP-Link Deco?

The TP-Link Deco is the latest device in a raft of new mesh router systems to arrive onto the market over the past year. Although the concept of mesh Wi-Fi has been around for some time, it’s only in the past year with the likes of the Netgear Orbi that the big names in home networking have got onboard.

Following the Orbi, Linksys entered the game with the Velop and BT with its Whole Home Wi-Fi system, leaving TP-Link among the big-brand latecomers.

But what is a mesh router and what can it do for you? For the full low-down head to our dedicated mesh router explainer, but the short version is that instead of a single, big router, you use a number of less powerful access points/nodes spread around your home to distribute the Wi-Fi workload.

The result is better range and faster speeds than you can achieve with any single router.

The three-node Deco system distinguishes itself from the pack with aggressive pricing and the inclusion of built-in antivirus.

Each mesh router/Wi-Fi system we’ve looked at so far has had a slightly different set of features. The Netgear Orbi is a two-node system designed to replace your existing router; it focuses on a particularly fast connection between its two nodes. The Linksys Velop is a three-node system that can either take over from your router or just take on Wi-Fi duties. The BT Whole Home is designed purely for Wi-Fi, with an existing router taking care of everything else.

The TP-Link, then, is most directly related to the Linksys Velop: it’s designed to completely replace your existing home network system but can also work with an existing router.

The system arrives – like all the mesh systems we’ve looked at so far – packaged up in a fancy-looking box, with all its components neatly laid out. It’s all very Apple-esque, which is the least you’d hope for when paying £230 for it. 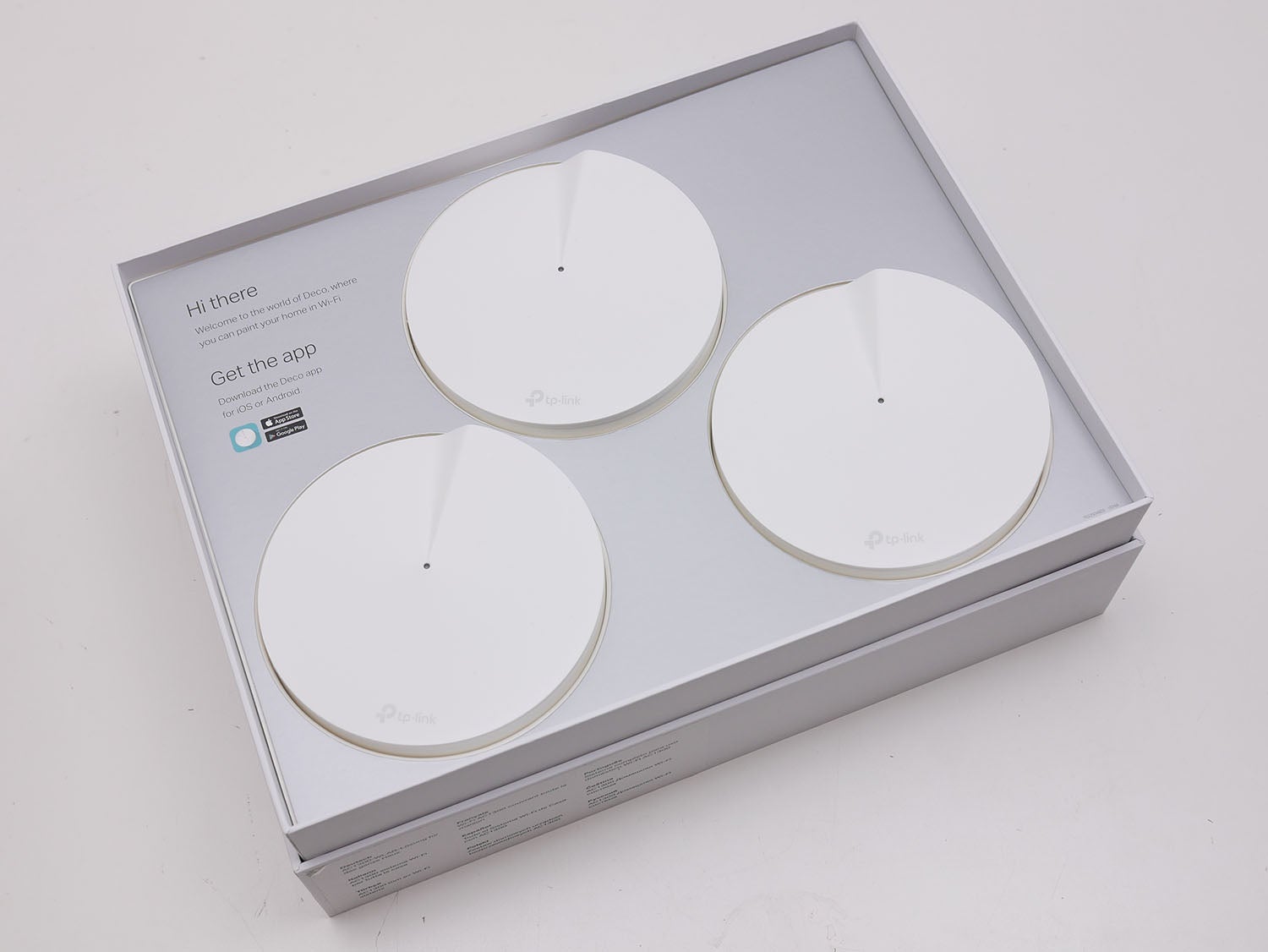 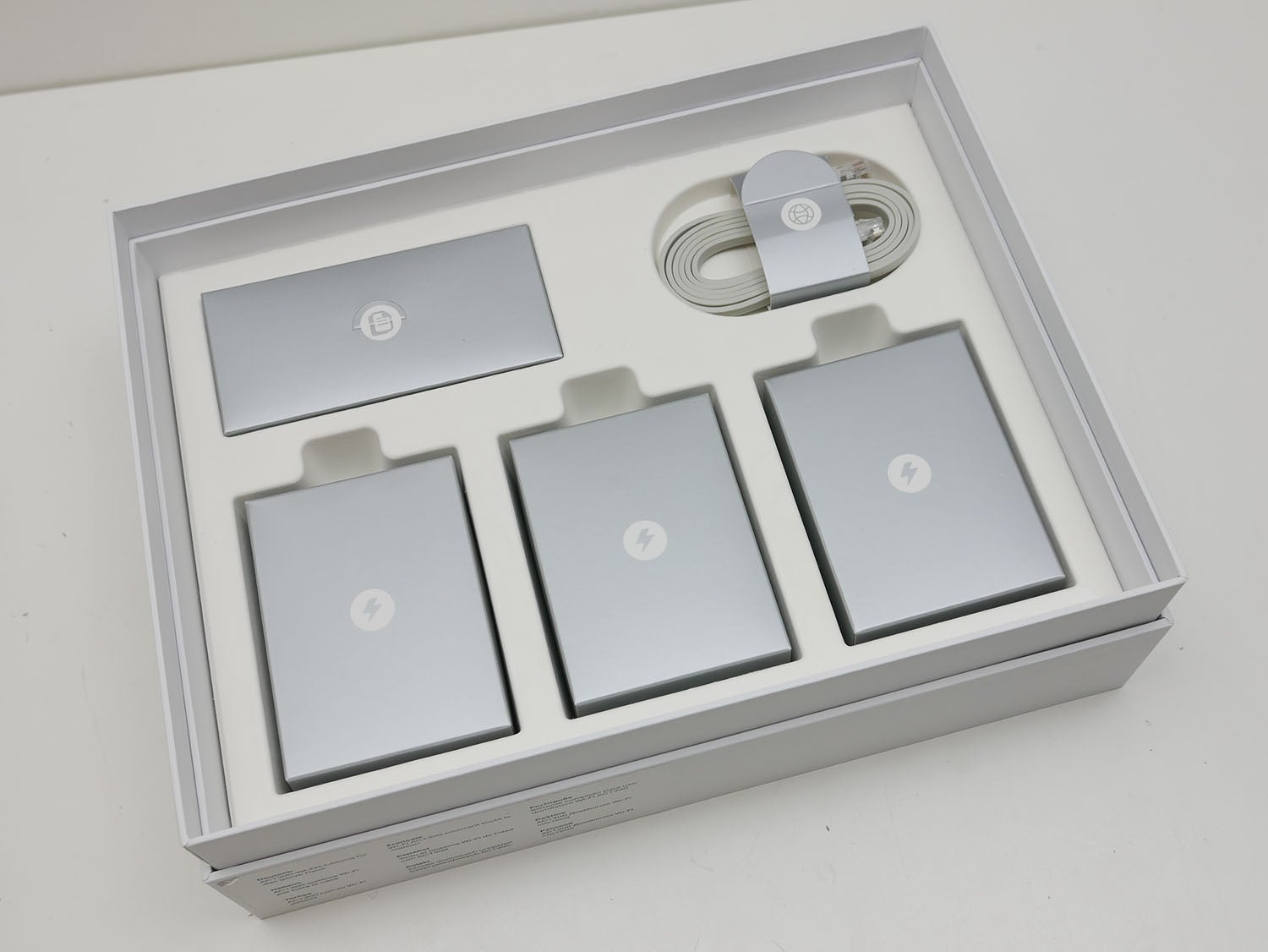 The three nodes are all impressively small white discs, measuring just 120 x 120 x 34mm, and each has just four features of note. There are two Ethernet ports for connecting other wired devices such as PCs or a NAS box, or for providing wired backhaul, and these are joined by a Type-C USB connection – which is its power source.

The only other feature is a single light on the top that glows in different colours and flashes in a variety of patterns to indicate the node’s status.

Inside, each unit comprises a quad-core processor and four internal antennas, for claimed throughput speeds of up to 400Mbps on the 2.4GHz band and 867Mbps on the 5GHz band.

These figures are the giveaway as to why the Deco is that much cheaper than most of its rivals. Combine the 400Mbps and 867Mbps and you have a total throughput for the Wi-Fi on each node of 1267Mbps, which is known as AC1300-class Wi-Fi.

In contrast, the Orbi boasts AC3000 Wi-Fi speeds, the BT Whole Home has AC2500 and the Velop has AC2200. As such, for raw speed the Deco is someway behind its rivals, though by the very nature of distrubuted Wi-Fi systems, this isn’t always noticeable in conventional tests.

Also, not that any other mesh systems do offer this, but it’s worth mentioning that you don’t get any USB ports like on many high-end individual routers. These are useful for sharing printers or data via USB hard drives or memory sticks.

Security is something TP-Link is keen to push with the Deco. It includes built-in antivirus that’s powered by TrendMicro. It enables the Deco to scan incoming and outgoing traffic to check for malicious content, prevent intrusions and infected devices from transmitting any sensitive information or “security threats” to devices outside the network. These features can be individually turned on or off, or you can disable the whole lot.

This safety emphasis extends to extensive parental controls. By creating profiles for each user and assigning a category (Child, Pre-Teen, Teen, and Adult), you can then assign a connected device to the profile and choose what the Deco should and shouldn’t allow. The sorts of things that can be blocked are adult content, gambling, and social networking. Plus, specific media, downloads and games can be limited and access time limits set.

Setting up the Deco system is largely very simple. Like the Linksys Velop, it’s all done via an app on your phone, with both Android and iPhone supported. You plug in each node in turn and the app will automatically connect to them via Bluetooth, so it can configure it and connect it to the overall system.

You start off with one node, connected either to your router or directly to your broadband modem – like most third-party routers, the nodes don’t include a modem. This you’ll do via the single included Ethernet cable; the inclusion of at least one extra cable for connecting other devices would have been useful. 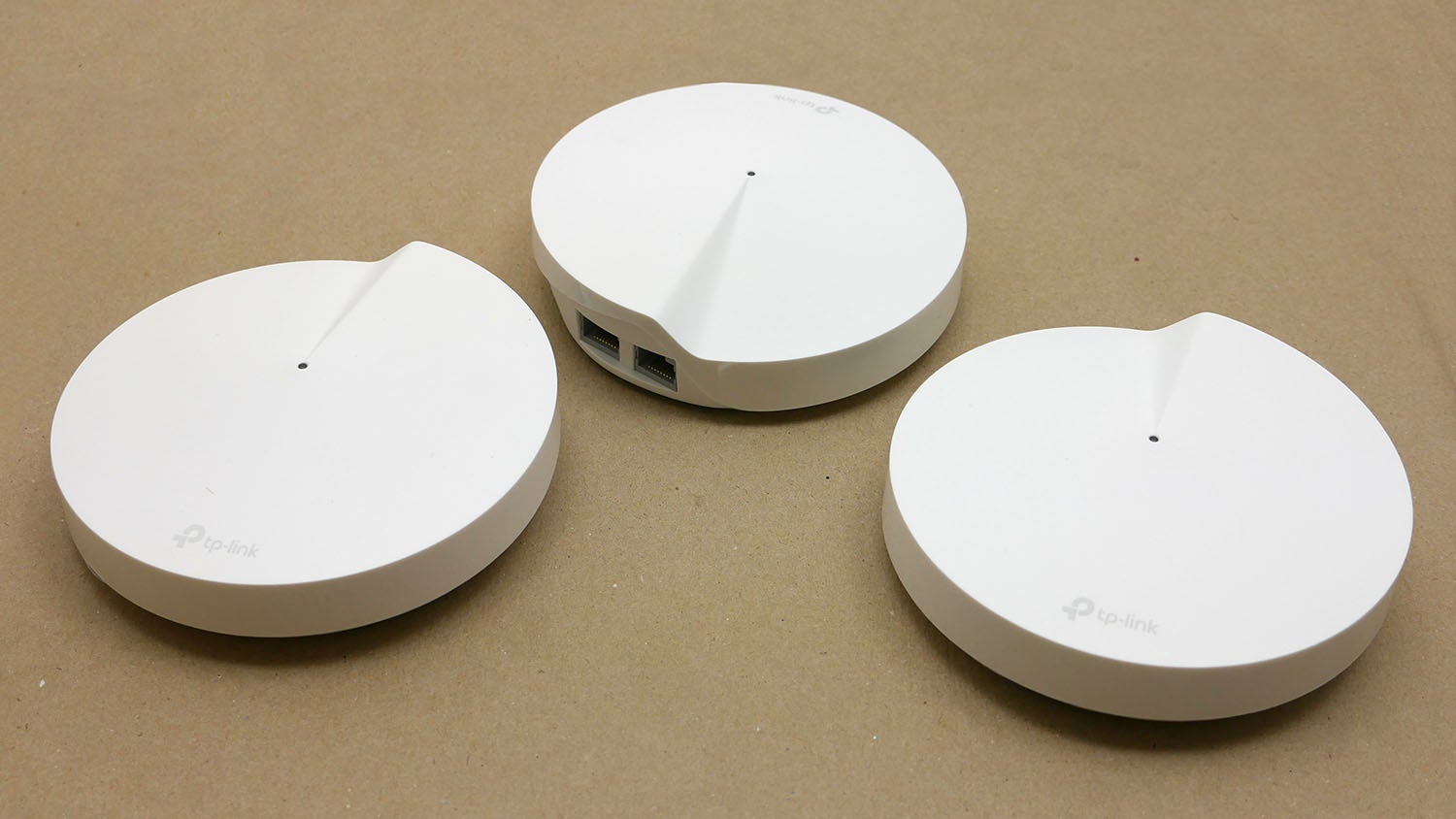 Once set up, you place and repeat for the next node. Ideal placement will very much depend on the layout of your home – but, for instance, in a three- or four-storey terrace or semi-detached house, you might have one on each floor. Meanwhile, buildings with larger single floors will have to include multiple nodes on each floor.

Note, for a typical British two-up, two-down terraced or semi-detached home, most such mesh systems are overkill. If you struggle to get signal in the furthest corners of your home then there’s a good chance that simply buying a better-quality single router will do the job.

Overall, setup is straightforward – but I did have a couple of complaints. For a start, while it’s great that the mobile app enables you to configure your router from anywhere in the world, it’s a shame there isn’t some sort of more traditional web interface for setting things up – like you get on more conventional routers – as you can’t always guarantee you’ll have your phone or a working internet connection when wanting to change settings. 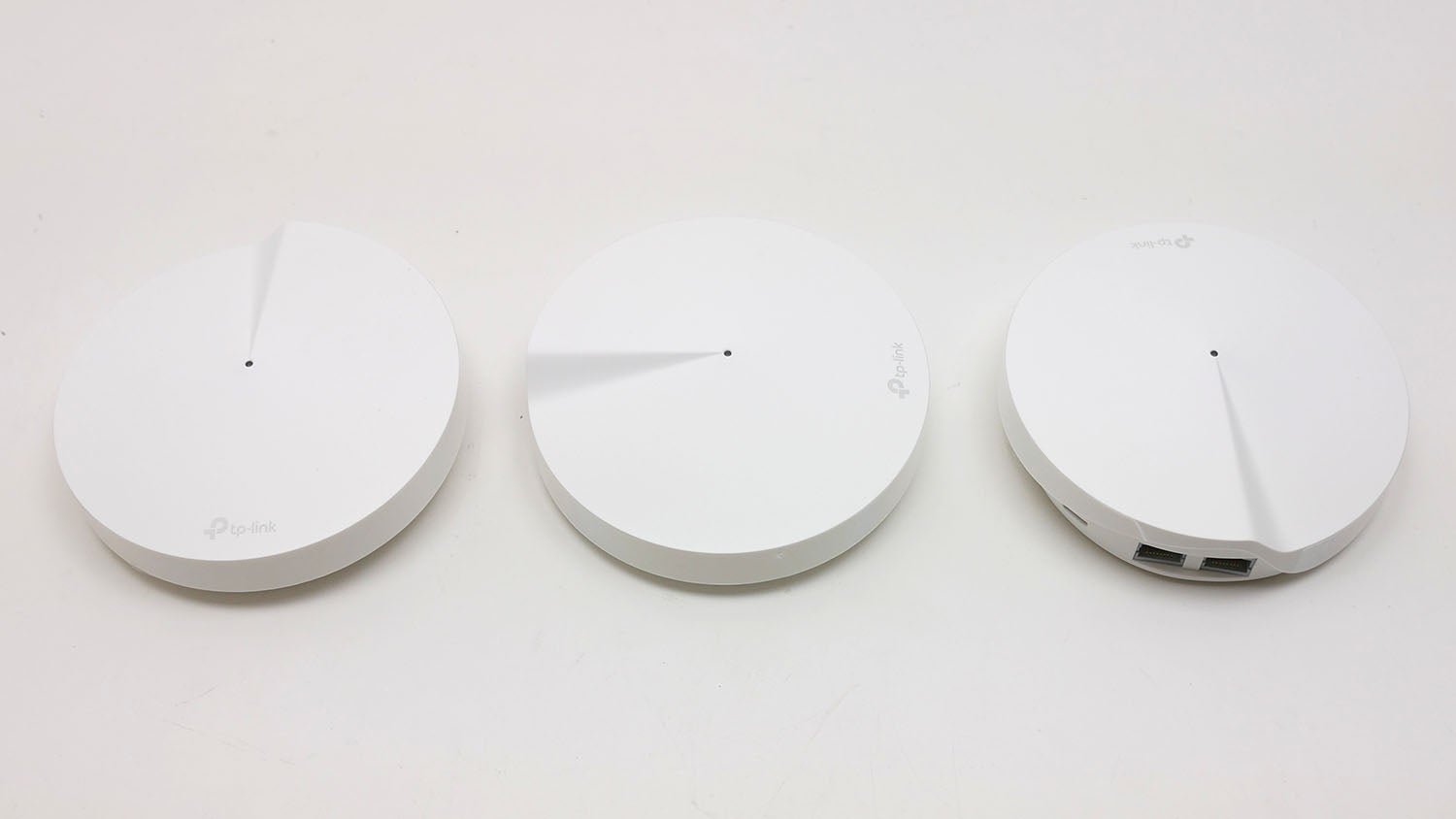 The other issue is that the Deco doesn’t properly support working with an existing router. When following the setup procedure on the app, there’s no option for this setup at all. However, if you just plug it in anyway then it will work, but rather than hooking into your existing network it creates its own, so anything connected to your existing router won’t work properly with your new Wi-Fi network – it will just piggyback on its internet connection.

A potential key advantage of the Deco system is that it offers the option of connecting the nodes via Ethernet cable, so that communication between them (the backhaul) doesn’t take up Wi-Fi bandwidth. However, you have to reset and reconfigure each node for either Wi-Fi or wired backhaul, rather than it being an automatic changeover as it is with the Linksys Velop.

Plus, wiring up your entire house rather hurts the Deco’s appeal as a quick-and-easy product. This is where the Netgear Orbi’s more expensive hardware makes itself obvious; backhaul is handled by a dedicated Wi-Fi network so speeds remain fast no matter what.

Altogether it adds up to a system that will get the job done for most users, but it could really do with a bit of tweaking to make for a truly seamless setup process for all.

To test the performance of the Deco, I initially setup just a single node and tested its maximum Wi-Fi speeds when standing just 2m away from it. This provides a good baseline indication of how it compares to other normal routers. And, it compares reasonably well.

Although its upload speed was somewhat slow, at an average of 216.6Mbps, its download speed was excellent, hitting 492.4Mbps – to all intents and purposes, as fast as I’ve tested for comparable AC Wi-Fi routers.

Next, I tested performance from a floor above (Test 1), followed by two separate locations a floor above that (Test 2 and Test 3).

Here we see by how much speed can drop off if you move out of line of sight of these routers. In fact, the Deco is, in this way, one of the least powerful routers I’ve yet tested – the similarly-priced BT Whole Home was up to three times faster with a single unit at these test locations. 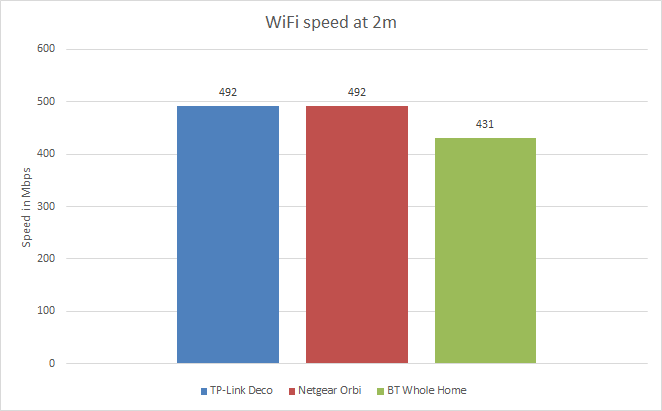 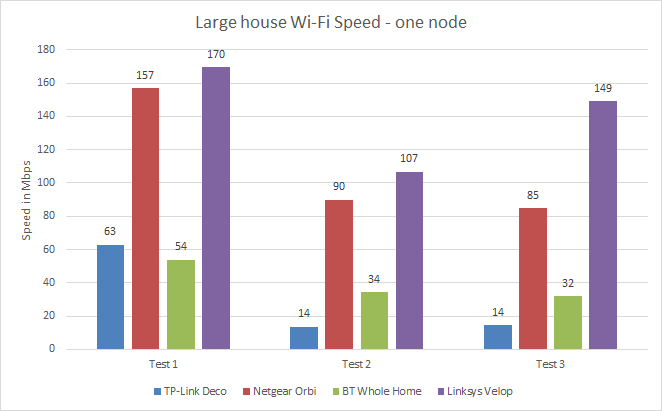 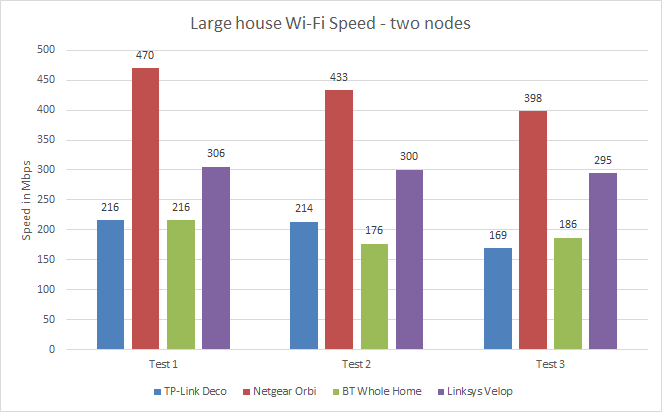 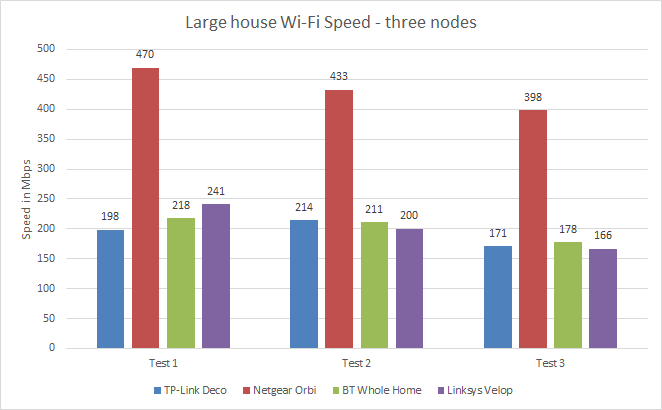 However, the power of mesh Wi-Fi is in numbers. Adding a second Deco on the first floor (second floor, for American readers) hugely boosted performance in all test locations and far outstripped the single router. Compared to other mesh systems then the Deco isn’t setting any records, but it’s on par.

Finally, the third Deco was added on the second floor (third floor in the US) and speeds tested again. As I’ve found with all the mesh systems I’ve tested so far, in a large three-storey house such as our test location, the third node isn’t necessary, with speed not improving a great deal. This is exemplified by the still vastly faster speeds provided by the Orbi, even when it has only two nodes. Instead, you might want to place the third node where it’s as close to the garden as possible, so you can get top-notch Wi-Fi while you barbecue.

Should I buy the TP-Link Deco?

The TP-Link Deco largely delivers on its promise of great Wi-Fi coverage and speed, a relatively easy setup and comprehensive security options. For many users it will be ideal, especially since it’s priced competitively.

However, it falls into a slightly awkward middle-ground between the cheaper but faster and easier to setup BT Whole Home, and more expensive but even faster and more capable alternatives such as the Netgear Orbi and Linksys Velop. It’s not a bad option but as a latecomer to the mesh shin-dig, it hasn’t brought a good enough party favour to out-do the other guests.

If security and a reasonably low price are your priorities then the TP-link Deco makes for a decent mesh Wi-Fi system.