Toy Soldiers: War Chest sees the series return after a four-year gap, bringing its trademark mix of tower defence and third-person action to a new console generation. The core reasons for the games’ appeal still stand: it’s a cleverly-wrought blend of genres made with humour and verve, and the sort of game that works well for grown-up gamers and for kids.

Sadly, it’s tarnished by some dubious money-grabbing practices that make it harder to recommend than it really ought to be. 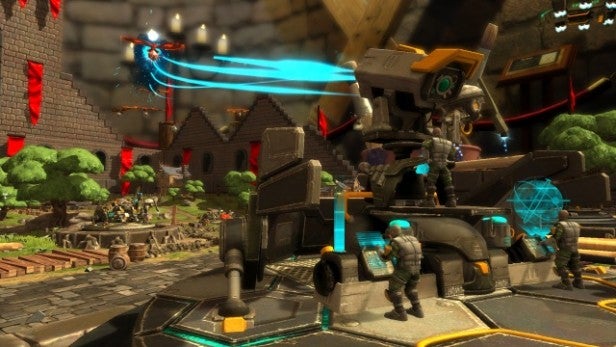 First, the basics. As we said, Toy Soldiers is at heart a tower defence
game. You control a toy army charged with defending a bedroom base. Wave
after wave of infantry and armoured vehicles (or equivalents) swarm
from portals on the other side of the map, and it’s up to you to wipe
them out before they reach and damage your toybox.

To do so, you place turrets in the available positions on the map, which spit out machine gun fire or anti-armour rounds to mop the invaders up before they reach it. Enemies killed are converted to cash, and you can spend that cash on building more turrets or on upgrading your existing ones, increasing their range, upping their damage or adding more protection. Some maps also have spots where you can place larger artillery or anti-aircraft turrets (the only way to deal with airborne enemy waves).

Where Toy Soldiers differs from other tower defence games is that it plays out in a fully 3D landscape, and in that you’re encouraged to take a more active role. At any point you can grab the controls of a turret and start blasting away and, if you’re any good, you’ll be slightly more effective than your AI troops – especially at range. What’s more, blasting away at your enemies will now fill a hero meter, and when you’ve filled it up enough you can unleash a hero figure onto the battlefield. At this point, the game becomes – for a limited time – a third-person shooter. You can roam the battlefield, wiping out infantry and armour with a choice of two weapons and doing your best to grab batteries to extend your time on the field.

On top of this, some levels come with vehicles already on the map. You can take these out and do your best to wear down enemy positions – some levels have them – or turn the tide of the battle. What’s more, you can keep filling the meter rather than unleash your hero, and spend the points on some tasty bomb barrage instead. 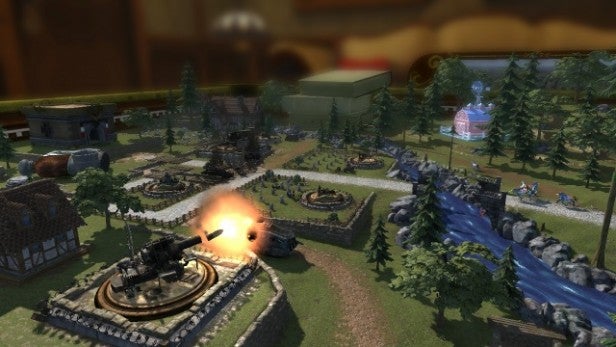 The gameplay sounds simple, but in practice it’s more frantic than you might imagine, not to mention more fun. You’ll find yourself quickly building and upgrading turrets, then hopping in one to tackle tanks or aggressive fairy ponies before they can cause too much damage. You’ll hop aboard your own captured tank or a fire-spitting, explosive dice-dropping falcon to tackle enemy emplacements or whittle down the incoming hoards, then popping out again for urgent repairs or a last minute effort to get anti-air turrets up and running before the bombers cruise in. Each map has its own style and its own challenges, and there’s a surprising amount of variety between them. Little details, like the way that common household objects become part of the scenery, help sell the bedroom battles theme. As a game design, it works.

What’s more, the armies themselves up the fun factor. Where the original Toy Soldiers went for straightforward military forces and the sequel, Cold War, went for eighties action-movie clichés, this one explores retro nostalgia for childhood toys, bringing back the first game’s Kaiser and his steampunk-enhanced Germanic units, but also a fantasy dark lord, a sci-fi super-soldier and a unicorn-riding, fairy princess faction with a horde of brightly-coloured bears. Who needs zombies or Nazis to shoot when you’ve got that?

There’s not, in truth, much difference between the armies and how they operate; the core turrets and emplacements work in much the same way. What’s more, the single-player campaign follows the same path and has the same intros and cut-scenes no matter which hero and army you take on. All the same, it’s hard to resist a game where the Kaiser’s gatling guns and cannons square off against fairies and unicorns, or where the dark lord’s troops are literally smashed into plastic pieces by incoming fire. 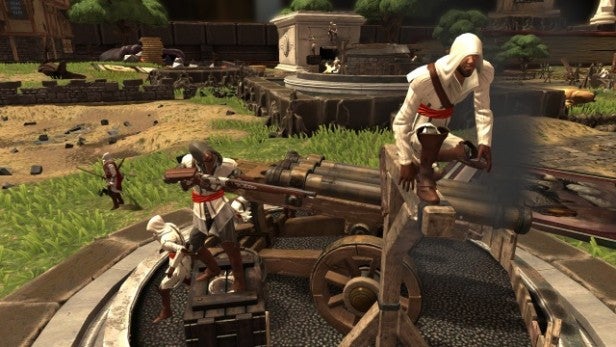 Well, it’s hard, but it’s not impossible. We can live with War Chest’s rather disappointing graphics: this is one of those games that looks like a last-gen effort given a 1080p upscale and some extra vegetation, but nothing much else. More seriously, there are some problems with the gameplay, and it’s hard to work out whether these are just problems or ways of driving people towards micro-transactions.

Additional paid-for content and micro-transactions play a big role in War Chest. For a start, one of its headline features is the option to play with licensed real-world toy armies for Masters of the Universe, GI Joe and Cobra, plus another led by Assassin’s Creed favourite, Ezio Auditore. These add additional side-missions to the campaign and can be purchased separately or as part of a Hall of Fame Edition for £10 more.

We’re not too worried about this, as the extra armies are entirely optional and add some extra fun to the game. After all, while G.I. Joe and Cobra don’t mean so much in the UK – this is Action Man territory. He-Man and friends are another matter, and being able to unlock He-Man and send him swinging and slashing through the enemy ranks is a treat, albeit one that doesn’t happen all that often. It’s also a shame that, presumably for licensing reasons, we only get a dodgy rip-off of the theme music from the original cartoons. 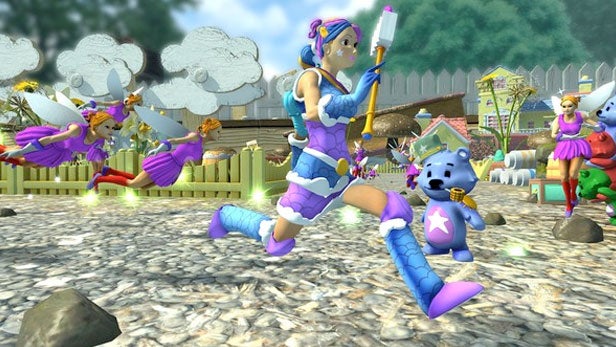 However, it won’t be long before you hit a brick wall in terms of the game’s difficulty level, particularly once it starts to throw in hulking boss enemies that hurl out turret-crushing fire like there’s no tomorrow and can demolish your Toy Box with a single touch. It turns out that the only way to resist these is to build and upgrade specific turrets until they’re super powerful, then do your best to take the boss down while you can. Unfortunately, these upgrades are locked off until you level up your hero and win a token that unlocks them – these are distributed randomly at the end of every game, so there’s no guarantee that you’ll get the one you need.

There are two other ways to unlock upgrades. One is to keep plugging away, earning generic in-game tokens then using these to purchase upgrades further up the tree. In fairness, it doesn’t take that long to grind these out of the system, but we’re still talking grinding all the same. The other is – you guessed it – to cough up real money for tokens. 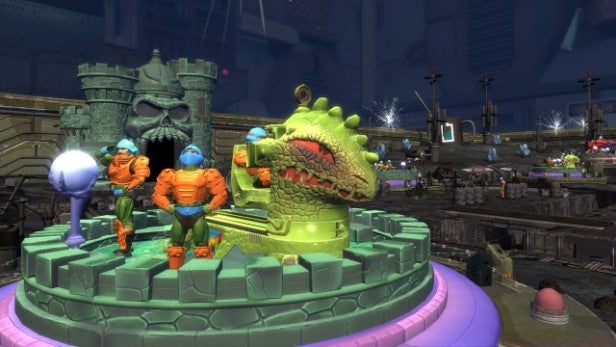 This isn’t game-breaking stuff. Nobody is forcing you to pay for tokens or for extra armies, and you can level and unlock the slow way perfectly well. It’s slightly annoying that your unlocks only apply to one army, forcing you to specialise rather than try them all out, but again this is an irritation rather than a serious annoyance. All the same, there’s something about this approach that feels a little too close to free to play mobile games, and it makes us like War Chest a little less than we otherwise would. Ditto for the annoying and completely unnecessary requirement to install and sign in to Ubisoft’s UPlay platform just to play the game online.

You’ll want to do so just to try out competitive and co-op gameplay, and player vs player maps add a new dimension to the game. We also like War Chest’s weekly challenge campaigns, which string a series of maps together, each one giving the gameplay a new twist.

Verdict
Toy Soldiers: War Chest is fun, and there’s little wrong with its genre-blending gameplay. The constant switching between turret-management and action gives the game a pace that other console tower defence games often lack, and the whole toy wars theme is really appealing. Sadly, it’s let down by its dated graphics, some difficulty issues and some optional micro-transactions that leave a bad taste in the mouth. It’s a good game at heart, but it lacks a little soul.