What is the Tower T14028 Indoor/Outdoor Electric Barbecue Grill?

Barbecuing at a moment’s notice is now ultra-convenient, thanks to this handy electric grill. Not only can the Tower T14028 Indoor/Outdoor Electric Barbecue Grill be used for both indoors and outdoors (great for rained-off alfresco entertaining), it comes with an optional stand, so you can site it wherever: the kitchen, a patio, the garden – or even take it on a picnic.

As it’s plug-and-play, there’s no lighting charcoal or sourcing gas bottles, plus there’s zero greasy mess to scrub away afterwards. The non-stick Cerastone grill plate can be popped in the dishwasher or cleaned by hand. 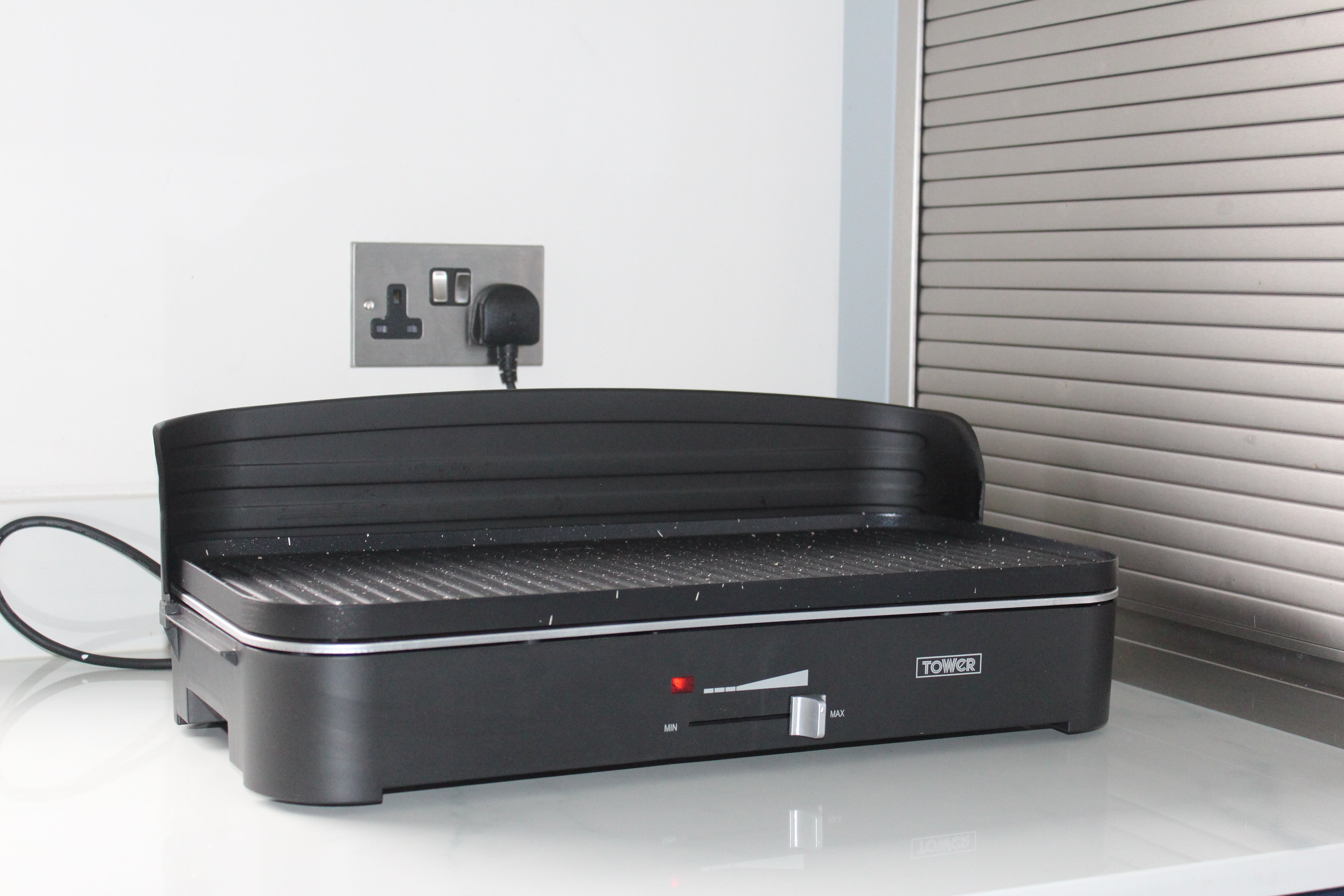 As an indoor appliance, the electric grill sticks to a simple design, consisting of a removable ridged grill plate that provides 1.25 square metres of cooking space on top of a heating element.

A hole at the back of plate allows fat and juices to run off into a drawer-style drip tray, which can be emptied. On the front, a slider controls the heat from minimum to maximum (around 200-260 degrees Celsius), with an indicator light to show when it’s been reached.

There’s also a windscreen that clips on. While intended for use outdoors, it can double up as a guard for fat splashes indoors, which is great for protecting worktops from mess. The A-frame stand provided turns the grill into a barbecue for use outside, or locations other than the kitchen. It comprises metal legs, a surface for the grill to sit on, a plastic shelf below and twin shelves either side for utensils and platters. Frustratingly, once assembled, this frame doesn’t fold up. This means it either has to be dismantled or it will take up a chunk of storage space.

Another issue is power cable length – at 120cm, it’s sufficient for a kitchen. But for using it outdoors, you would need a socket nearby (limiting choice of location), or an extension.

Tower T14028 Indoor/Outdoor Electric Barbecue Grill – What’s it like to use?

There are no recipes with the grill or much guidance to cooking times or temperatures. So like a standard BBQ, you need to use your judgement. I started by using the grill as an indoor appliance. The instructions advised heating it initially for 10-15 minutes before cooking, although it reached maximum heat in less than five minutes.

Keeping the heat on high, I added burgers and sausages to the grill. As the area is sizeable, it gave off a lot of heat and the kitchen grew quite warm. I also needed to run an extractor because of the amount of steam that was emitted. The burgers and sausages took around 20 minutes to cook evenly on both sides, with the temperature turned down to halfway for the last few minutes as they were starting to char. While a substantial amount of fat and juice ran off into the tray behind, there were a lot of spatters on the worktop that needed cleaning up – although the windshield reduced this. Turning the temperature down to low, as advised for foods such as vegetables and fish, I added mushrooms and a halved chicken breast. 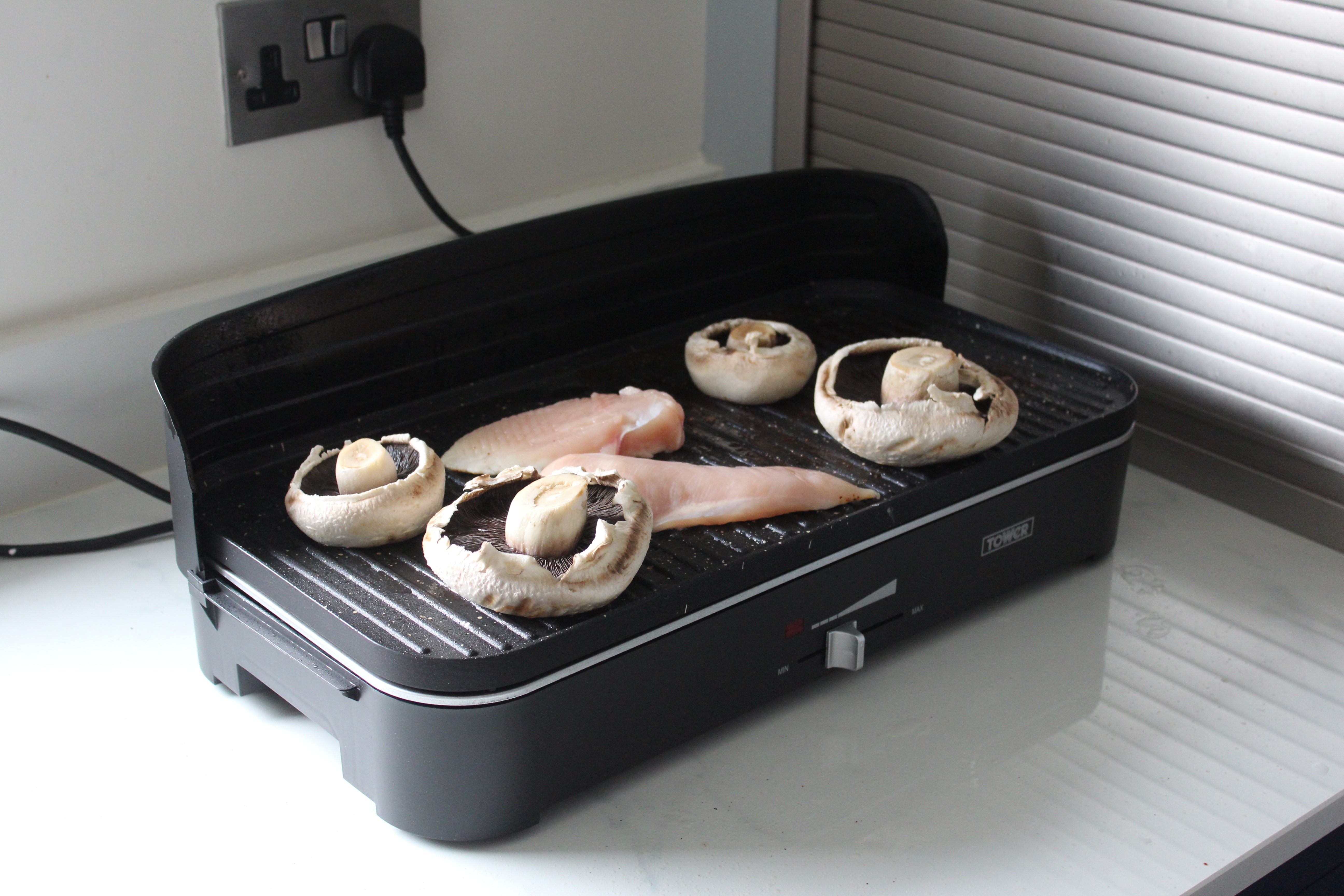 This gave off much less heat but also appeared to not cook the food quickly. Turning the heat up, the food started to sizzle, and, as the mushrooms didn’t burn, this higher heat seemed more suitable. The chicken and mushrooms were adequately cooked after around 15 minutes, with the mushrooms juicy and tender and the chicken slightly browned with no pink remaining. 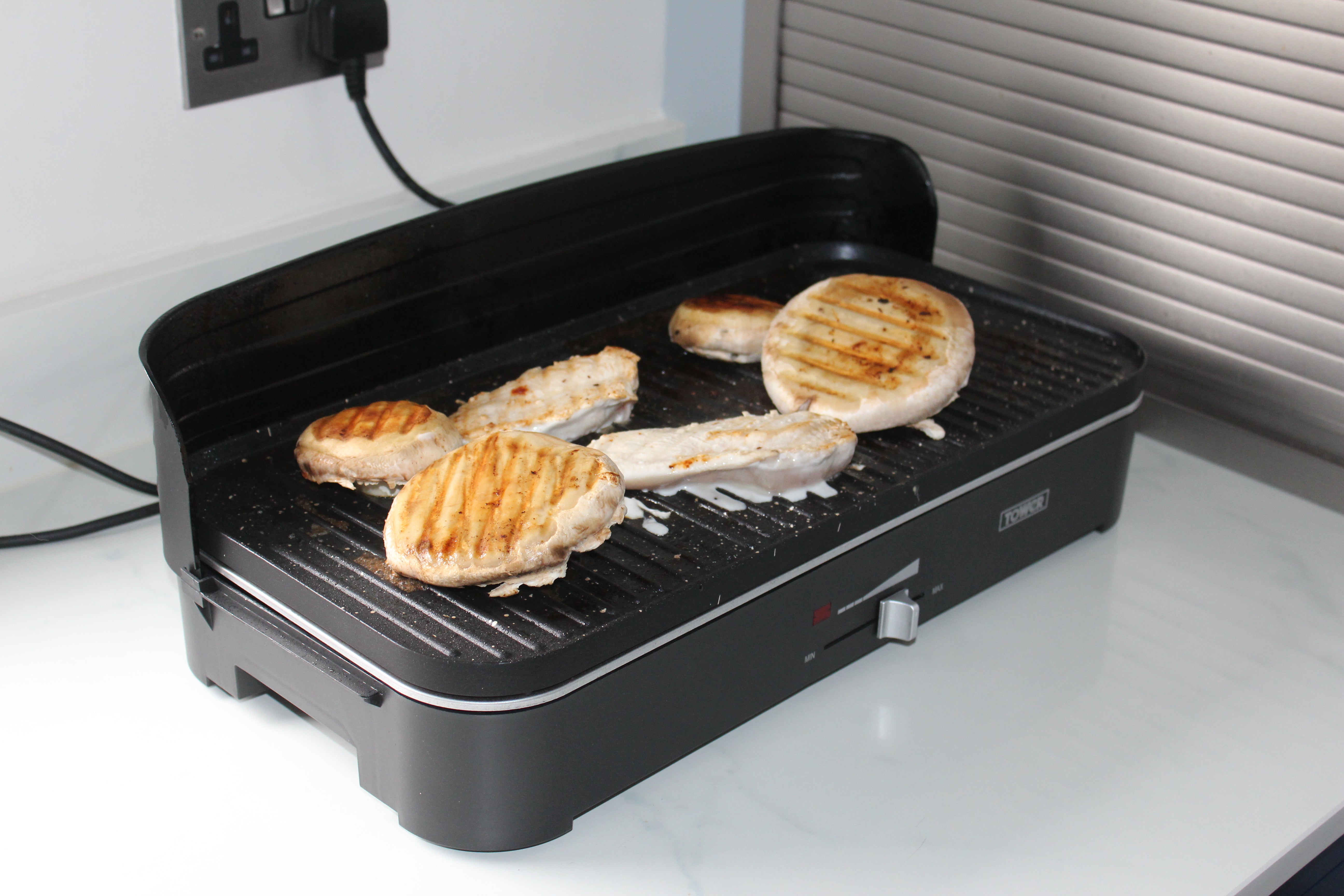 For outside, I had to assemble the stand. Each leg attaches in two places, using wing nuts and screws, which can be fiddly to connect. I found using a crosshead screwdriver helped finish it faster. This took me about 15 minutes. Turning the grill to high, I used it to cook corn, steak and asparagus. 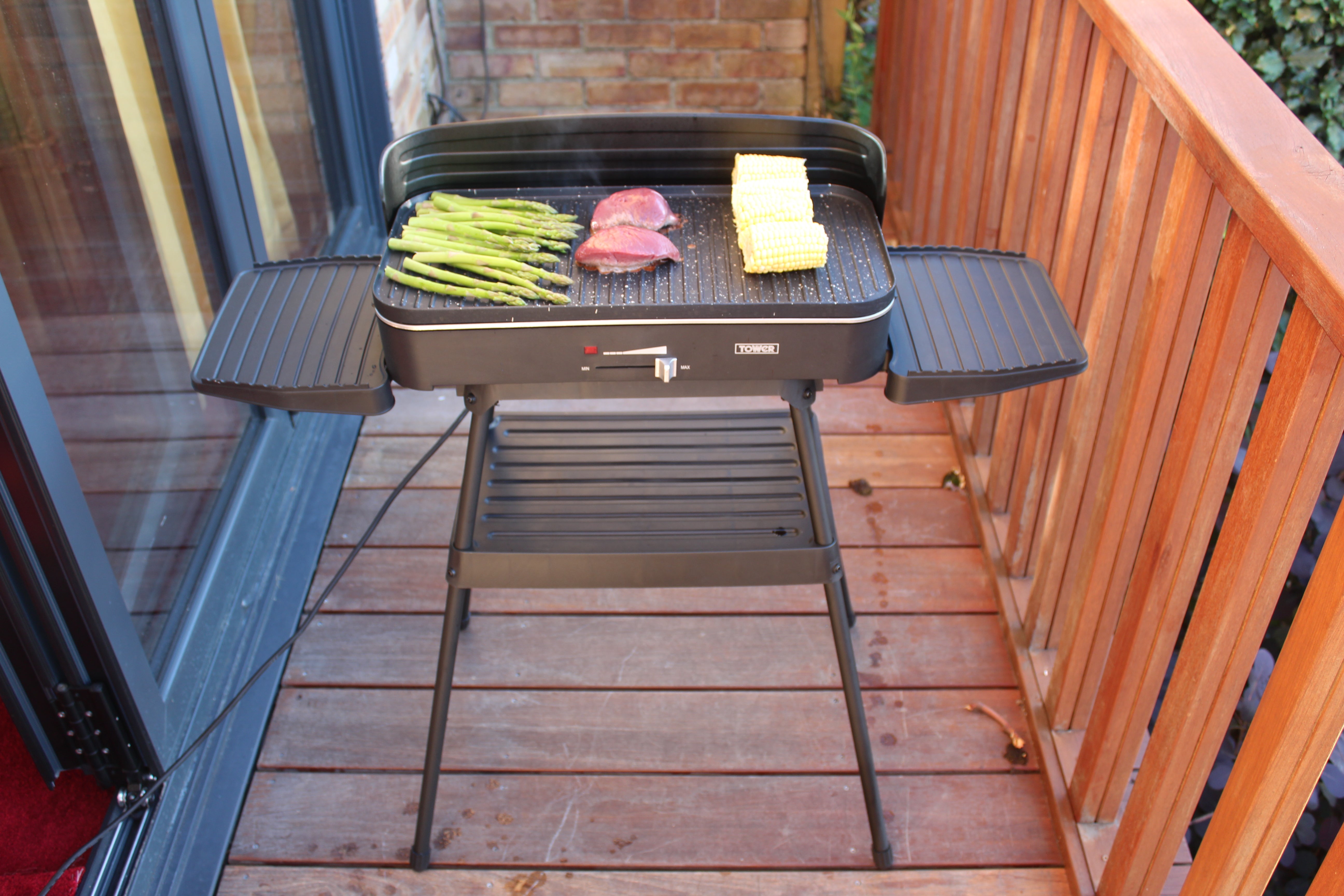 The asparagus cooked in around 20 minutes without burning. But the meat was thick and took 20 minutes to brown, and a further 10 to remove redness. The corn was the last to come off, but it was tender and perfectly cooked. I found that dropping the temperature of the grill to prevent charring reduced how much the food sizzled.

Good quality results all round make this grill a winner, although it’s worth pointing out that you won’t get that BBQ taste, as this is a traditional grill. If that bothers you, a traditional BBQ will be a better choice. If you’re more concerned with flexibility than a chargrilled taste, you’ll be happy with the Tower T14028. The short cable was awkward – half its length is taken up by the height of the stand when connected to an extension, although an outside socket wouldn’t be at ground level. The grill plate and windshield fitted easily in the dishwasher and came out sparkling clean with no burnt patches. The drip tray was simple to wash.

What’s fantastic about Tower T14028 is its flexibility. This grill can be whisked inside at the first sign of a shower and used year-round to cook food while reducing the fat. It also delivers on generous capacity and easy cleaning, so there’ll be no more scrubbing grates at the end of a party.

Where it could do better is in the details – a longer cable with some wraparound storage would give it more versatility, as would a stand that folds away. Knowing what temperature you’re cooking at would be a bonus.

However, for the price, it’s a great value buy for families, couples or anyone on a health kick who wants the flexibility to cook indoors and outdoors.

A go-to grill that lends itself to more than bangers and burgers.