A Total War Saga: Troy is a superb entry to Creative Assembly's strategy series, with both combat and diplomacy proving incredibly addictive. However, there have been a few tweaks to the Total War blueprint in order to accommodate the Bronze Age setting. Hardcore Total War fans may be dismayed by the lack of unit variety, but newcomers may well relish the simplified approach. The new economy system also adds a new depth to diplomacy and strategy, making non-combat play significantly more enjoyable no matter your Total War experience level. And with a smattering of Greek mythology, Troy feels one of the most distinctive entries to the series yet.

A Total War Saga: Troy is ridiculously addictive, featuring the same strategy-rich combat that Creative Assembly’s popular turn-based series is renowned for. But by tackling the Trojan War, the latest entry has marched into uncharted territory with the Bronze Age setting and sprinkling of Greek Mythology introducing some game-changing tweaks.

While Creative Assembly has built a reputation of recreating famous wars with astonishing accuracy, it’s been forced to adopt a more creative license for Troy, with historians knowing relatively little about the Bronze Age period.

Resisting the urge to go full Warhammer and embrace the fantasy aspect of the Trojan War, Creative Assembly has reimagined the epic through more grounded goggles. Mythical monsters and Greek Gods still play a major part here, but you’re limited to human troops and worshipping the likes of Zeus will only grant you combat and productivity buffs rather than allowing you to obliterate the battlefield with lightning bolts.

By balancing fact with fiction, Creative Assembly succeeds at retaining the engrossing combat realism of its historical epics, while also adding a splash of mythical flavour to entice newcomers and keep hardcore fans on their toes with new twists to the tried-and-tested Total War blueprint. 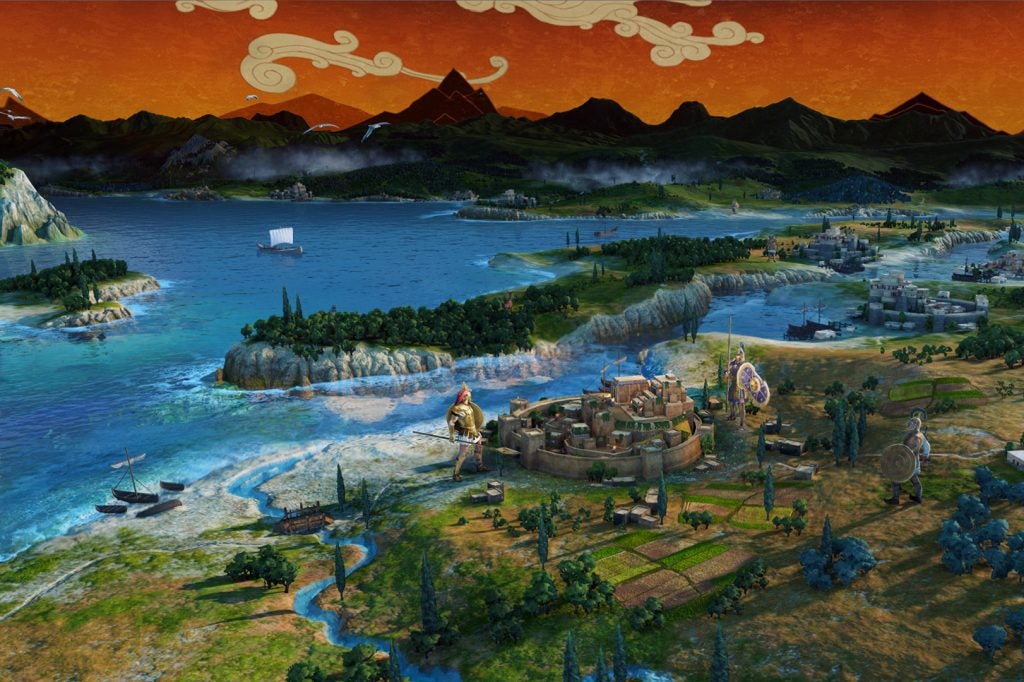 One of the most notable differences is the time period. The Trojan War marks the earliest point in history that the Total War series has ever tackled. That not only affects the visual looks of buildings and clothing, but also restricts what units are available to recruit for warfare. The usual swordsmen, spearmen and archers feature, but cavalry is now reserved as special class units.

It took several hours of play before I encountered the first enemy cavalry unit, making them feel more like a super-powered special class rather than the core foundation of the classic rock-paper-scissors formula. This changes the whole dynamic of combat, making it significantly more difficult to mow down fleeing soldiers and counteract the bombardment of arrows from archers.

This also means Troy features one of the least versatile pools of unit types in the series, at least for common troops, resulting in a lot of repetitive combat in the early stages of the game. Don’t get me wrong, combat is still tactically deep and engrossing, with various map terrains and weather systems keeping you on edge, but seasoned Total War players may be disappointed by the reduced combat options.

To make up for this, Creative Assembly has introduced special class units inspired by mythical monsters. The centaurs are essentially men riding horses, while the Minotaur is a huge human warrior who intimidates foes by wearing a bull’s skull as a mask. These are really smart additions, playing homage to Greek mythology while also contextualising them in a realistic setting. However, these special units are tied to certain settlements or faith upgrades, so you’ve got to jump through a few hoops in order to add them to your army. 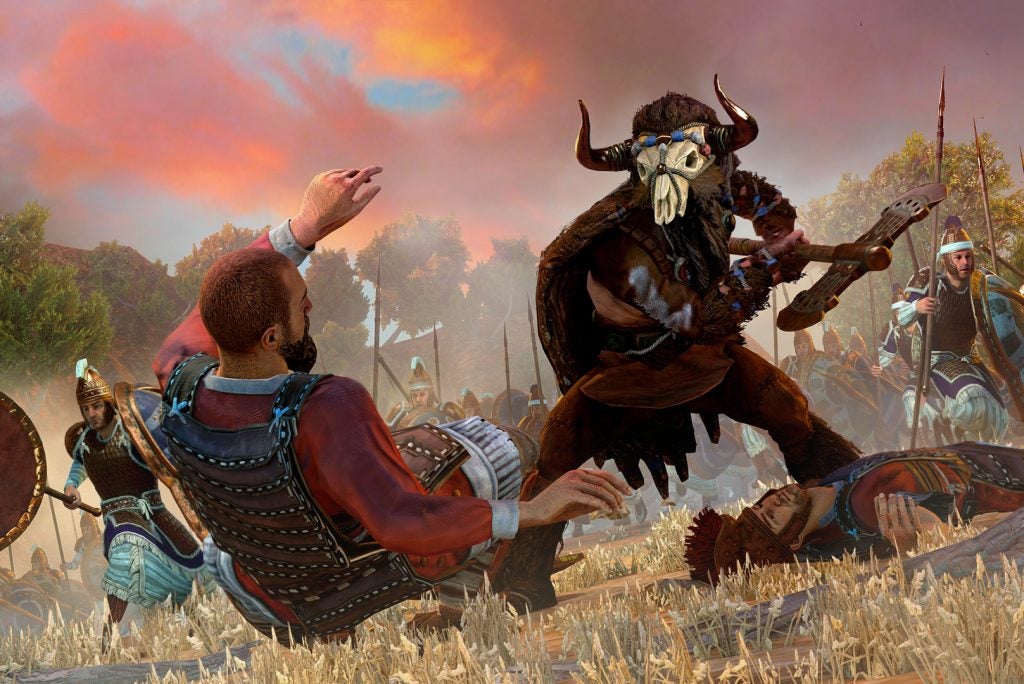 Another addition to the series is the new currency system. Instead of relying solely on gold, you must now harvest wood and stone in order to build and upgrade settlements, while bronze is required for recruiting high-tier soldiers. Food remains the most important resource, as it’s needed for the upkeep of your armies. And while gold is still a resource option, it’s generally only used for bartering with other factions in trade agreements.

This five-prong currency system is excellent, not only staying faithful to how people traded back in the Bronze Age, but also adding more tactical depth to both conquest and diplomacy. Each settlement (barring capitals) will specialise in harvesting a specific resource. If you’re hoping to amass multiple large armies as soon as possible, then you’ll want to focus on acquiring farms instead of stone mines, requiring you to plot ahead rather than just waging war with the closest faction.

Diplomacy also benefits from the new currency system as you’ve further incentive to trade with external factions. If you’re low on a specific resource but have plenty of another, you can strike up a trade deal. Negotiating trade deals is admittedly devoid of character or tension, as the interface will immediately glow up green when your opening offer is agreeable, but it’s still refreshing to have a worthwhile strategy other than combat.

Multiple trade agreements can also improve your relationship with other factions, eventually allowing you to strike up military alliances. What’s more, if a faction likes you enough and there’s a significant power difference in your favour, you can absorb them into your confederation. This is an efficient way of hoovering up provinces owned by smaller factions, avoiding the tedious process of engaging in wars firmly stacked in your favour. 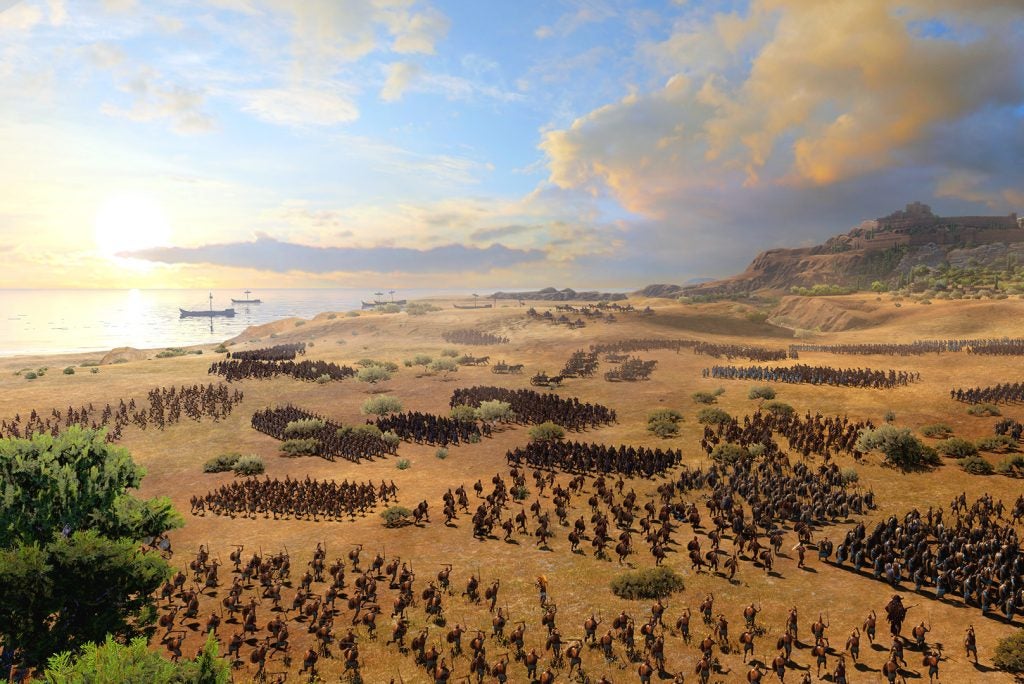 You’ll also be given character-focused objectives to complete in order to achieve a ‘Homeric Victory’, with the goal depending on what hero you chose at the start. Achilles desires to duel any foe that dares question his might, while Hector and Paris compete to impress their father so they can be crowned king of Troy.

Such objectives do a great job of fleshing out the personality of each hero, but they’re arguably inconsistent. Achilles’s obsession with duelling quickly became an irksome distraction for me rather than an enjoyable objective to chase. Fortunately, you can largely ignore these quests, and focus primarily on the Total War Victory conditions instead, which involve destroying the enemy, occupying or razing 100 settlements and capturing / defending the city of Troy.

Regardless of which option you pick, optional in-game guides provide clear explanations of the steps you need to make in order to complete your objectives. In fact, Troy looks to be one of the best entry points for newcomers in the whole series, with the smaller pool of units reducing the complexity of warfare and optional tutorial explaining the fundamentals. Newcomers will still likely be a little overwhelmed initially, but Troy feels a lot more welcoming than the majority of other Total War titles.

The presentation and attention to detail is also outstanding. Two generals are shown during after every battle to represent the outcome of a battle, while the menu and upgrade systems are beautifully decorated with Greek mythology. The art style is more colourful and cartoony than most other Total War titles, giving it a more lighthearted vibe than more historically faithful entries.

Landscapes look gorgeous, as do the detailed animations of all the troops during battle. I encountered no technical issues with my Ryzen 5 2600 CPU and Nvidia RTX 2080 Ti GPU, although benchmarks showed that I was only hitting an average 41 fps in ultra mode with a 1707 x 960 resolution (1080p was seemingly unavailable in full screen mode). Such a low result makes me worried that those with weaker graphics cards will encounter serious performance issues. Dialling down the graphic settings to ‘Medium’ did at least see the average frame rate leap to 95 fps, but the visual quality suffered dramatically as a result. 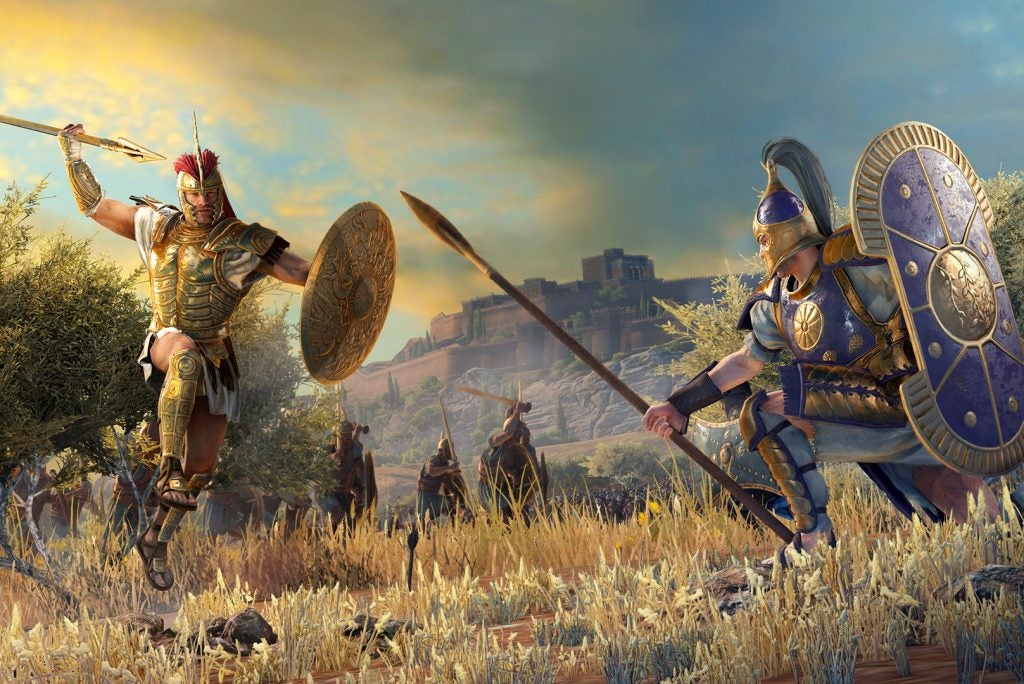 A Total War Saga: Troy feels like a very unique entry in the strategy series, blending historical accuracy and mythology in order to reap the benefits of both grounded warfare and fantastical entertainment.

The limitations of the Bronze Age does however dilute the versatility of combat, with the likes of cavalry units pushed to the backseat. Those who’ve already played the likes of Total War: Warhammer II may struggle with the comparatively barebones warfare, but Troy does at least prove to be a more approachable entry point for newcomers.

That said, Troy introduces many improvements to the series formula, particularly with the new resource system which makes non-combat management far more enjoyable and tactical than before. Diplomacy is still nowhere near the levels seen with the likes of Civilisation, but Creative Assembly has made a striding step forwards in the right direction.