So, why is this a Total War Saga and not Total War: Britannia? Having played it, I’m still not really sure. The title and the spin-off status had me expecting something similar in feel to a stand-alone expansion pack, perhaps something episodic like the old Napoleon pack for Empire: Total War. Instead, Thrones of Britannia feels very much like a ‘proper’ Total War, only focused on a very specific area at a very specific time – a little like the campaigns in the Kingdoms expansion for Medieval II. Sure, this means it works on a smaller scale, but here’s the thing: when you focus in so sharply, you get to see a lot more detail.

And detail is very much what Thrones of Britannia is all about. Its subject is the British Isles near the turn of 10th-century AD. Alfred the Great has put a stop to the Viking conquest of England and is on a mission of unification. Scotland and Ireland are in turmoil, with rival tribes duking it out. The Welsh are caught between peace with Alfred and open rebellion, while the Norsemen still harry English ports from the South and East.

Basically, Britannia’s in a right old mess. It’s no wonder Alfred (apocryphally) burnt those cakes. And if you’re worried it’s all about making Britain great by expelling all the foreigners, don’t be. One thing Thrones of Britannia does successfully is make you realise what a strange and culturally conflicted land 9th-century Britain was for everyone concerned. 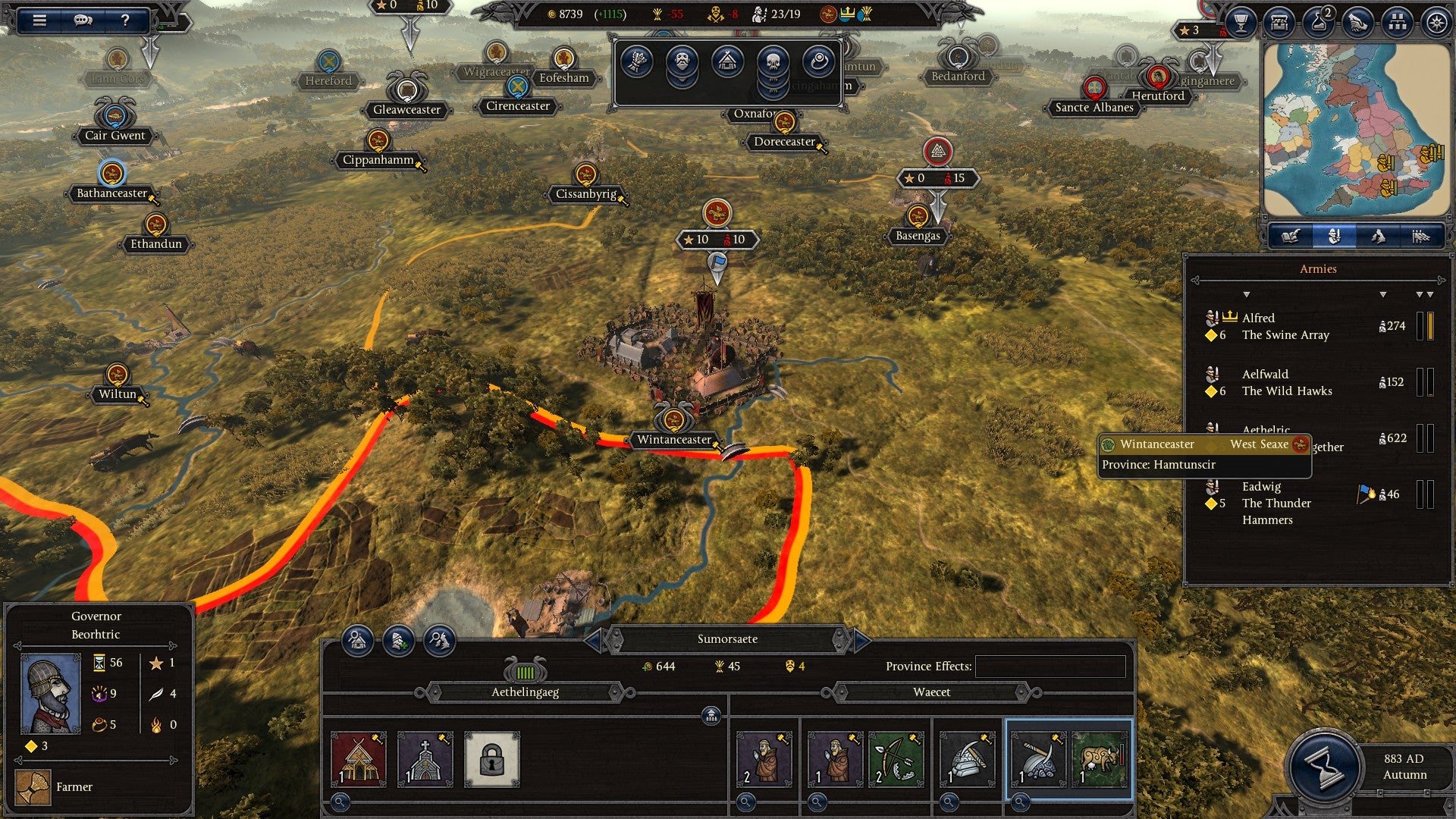 An expansion pack might have focused in on just one faction, but while Alfred’s drive to unify the kingdoms of England is central, it’s far from the only saga on offer. You can play as any one of ten factions from the Anglo Saxons, Welsh Kingdoms, Gaels and Vikings, and focus on events in Wales or Ireland if you want.

In fact, the experiences are surprisingly different. The battle for the kingdoms of Ireland is a bloody turf war fought in smaller territories, where you’re shaking hands with a king one minute, looking to stab him in the back the next. For Alfred, it’s more a case of steady expansion, driving out or subjugating Viking remnants while watching for rebellion across your existing lands and vassal states.

If you’re new to Total War then this probably isn’t your best entry point. There are tips and short tutorials to help you gain your bearings, but for much of the game you’re really on your own. This isn’t a problem, though, as in many ways Thrones of Britannia plays like the pre-Warhammer Total Wars.

You still have a grand campaign that you play through turn-by-turn. You still raise and move armies, develop settlements and fight in battles, choosing to commend your forces manually or have the game auto-resolve based on your fighting style and troops. You still have to deal with events that crop up like flood or famine, while defending your territory and doing deals with your neighbours. 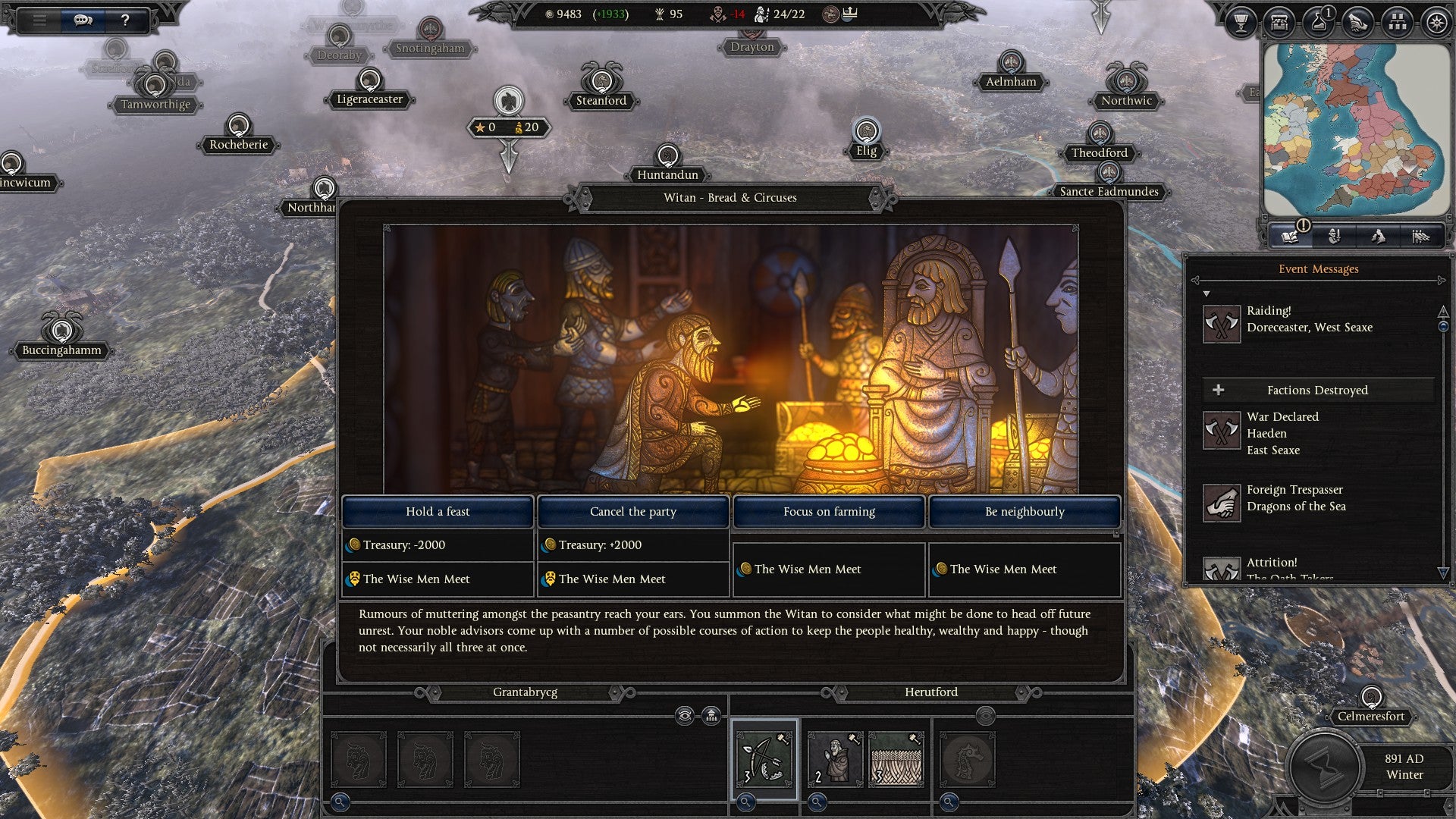 There are differences, however. Units are now recruited from a central pool, according to what’s available and what skills and training your Dark Ages R&D team has uncovered. Units also consume food and lose troops, often at a frightening rate, so you need to maximise your food supplies and avoid long forays into enemy territory if you don’t want to lose half your army to starvation or desertion.

This takes longer to get your head around than anything else, particularly if you’re used to a more aggressive or exploratory style of play.

How you handle settlements has changed as well. Instead of flexible, fully upgradable towns and cities, the settlements of the 9th- and 10th-century British Isles tend to specialise. This makes you think hard about how to make the most of each town or province’s unique capabilities, maintaining food production, technological development and to continue strengthening your armies.

Many of your settlements are also virtually defenceless, and this combined with the tightening on resources makes you work to balance your offensive forces with mobile forces you can move to defend your kingdom as and when you need to. Trust me: I’ve ignored warnings of Viking incursions and watched helplessly as ports are sacked and resources stolen. I’ve seen towns burned and provinces conquered because I didn’t have a half-decent army in reach.

Thrones of Britannia isn’t a game where you can afford to take your eye off the ball. Go all out on the offence, and it will be more than those cakes that get burnt. 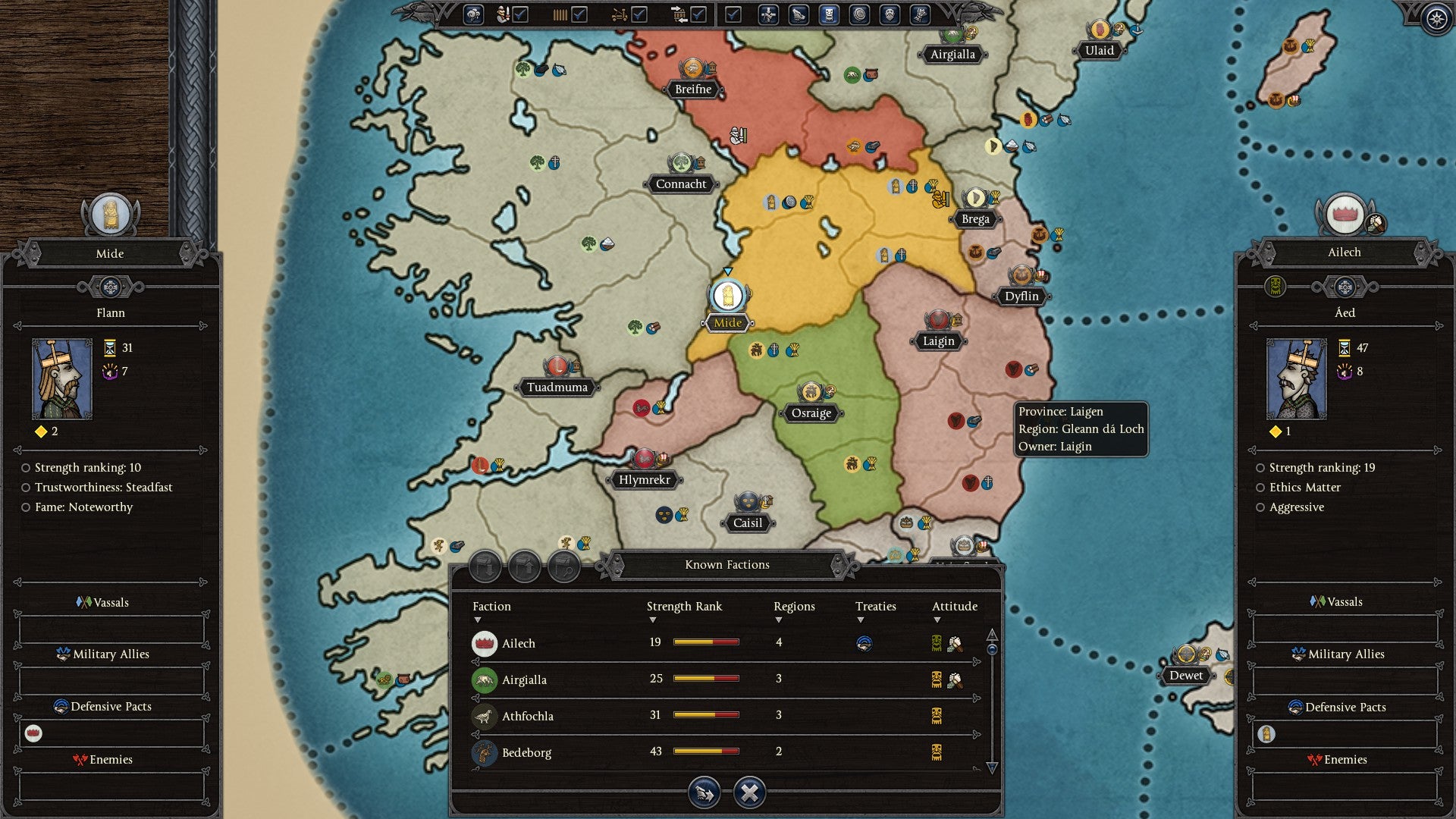 Actually, let’s say balls rather than ball, because you’ll be doing a hell of a lot of juggling in this game. Thrones of Britannia isn’t just about the armies and the settlements, or even the economy and diplomacy. There’s a whole extra layer of complexity in handling your nobles; keeping them sweet, arranging marriages, handing out estates and titles and the rest.

Nobles who aren’t treated favourably become disloyal, rebelling against your rule. An underling with two much influence becomes a rival, giving other nobles a focus for their own bad ideas.

The game isn’t particularly clear in its explanations about how this all works, but once you get the hang of it all you’ll see how this stuff gives Thrones of Britannia its own rich personality. You’ll learn to watch certain characters and use loyalty-boosting buildings and followers to help keep them happy. You’ll discover how to reward and cajole without making anyone feel more important than they should be.

Thrones of Britannia can be a bit of a dry game, but it’s fascinating in its depths – and there isn’t as much heavy or tedious micro-management as there might first appear.

Most importantly, between the gameplay tweaks, the Saxon and Gaelic names and some effective use of stylised illustrations, the latest Total War does what all the best ones have done: it gives the era is its own distinctive feel. 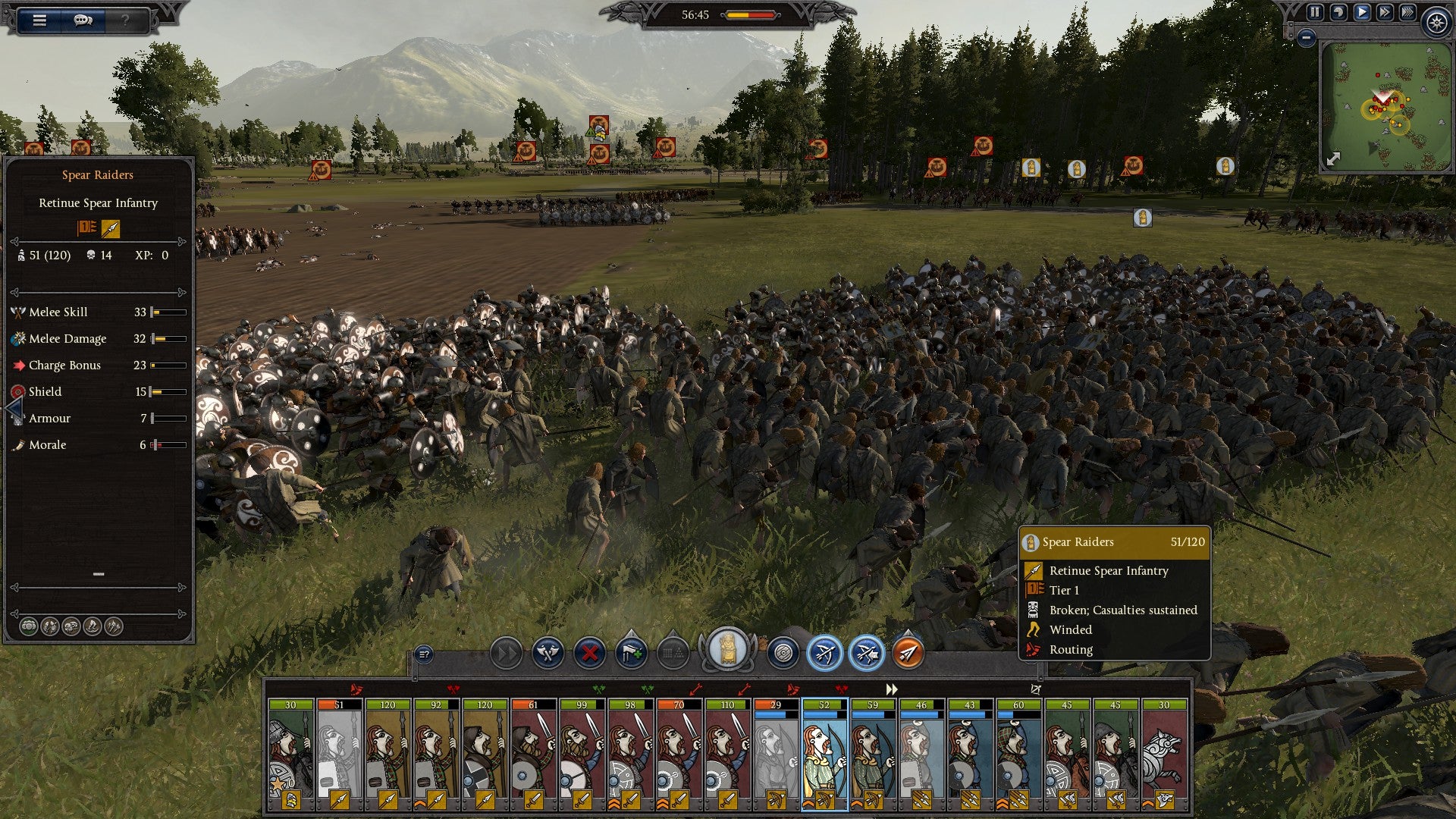 If the game suffers anywhere, it’s in the warfare. It might be that I’m coming to Thrones of Britannia from the outlandish, action-packed fantasy of Total War: Warhammer II, but the battles seem a little pedestrian. Possibly, there’s only so much you can do with swordsmen, spearmen, mounted cavalry and archers. Different factions will have advantages in terms of heavy units, arms and armour, and, with the Norsemen around, some naval warfare is on the menu.

Don’t get us wrong: this is still Total War – and as spectacular and tactical as ever. Yet it’s also a more conservative Total War than its immediate predecessors. Perhaps this is the reason there are no specific battle scenarios this time around.

Historical strategy isn’t everybody’s cup of tea, and this isn’t the most broadly accessible historical strategy game. It plays to a niche of gamers who want more realism and in-depth management, and who like wrestling with the politics, warfare and complex challenges of a specific period and place. Even as someone who likes Total War, I wasn’t sure whether I was having a good time for the first few hours.

Yet Thrones of Britannia retains all the classic hooks of getting under your skin. One more turn becomes one more hour. One more hour becomes, blimey, where did the early hours of the morning go?

I wouldn’t make it my first Total War – go for Atilla or Warhammer instead – but if you’re looking for a more serious, less knockabout saga, Thrones of Britannia is a winner.