Available on PC, Mac
For a while Total War vied with Civilization as the PC’s most essential strategy series. From the original Shogun through to 2009’s Empire, Creative Assembly successfully combined impressive 3D graphics with exciting, tactical warfare and an approachable but satisfying framework of conquest and diplomacy. In recent years, however, Total War has lost a little of its grip, losing its mainstream audience while struggling with AI, balance and stability issues that have upset some of its long-term fans.

This latter group should be better pleased by Total War: Attila. While it’s still, on day one, prone to the odd crash here and there, it’s generally a solid, intelligently conceived new chapter. It takes a new, less familiar era – the collapse of the Roman Empire and the heyday of the Goths and Huns – and brings it to life, while mining it for interesting new ideas and game mechanics. If you’re a Total War enthusiast who has already mastered the basics, you’ll be impressed that what’s old is so solid and playable, and that what’s new spices things up a little. And everyone else? Well, that’s where things get difficult. 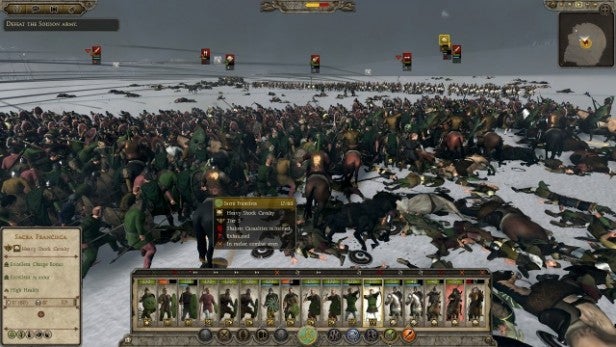 Attila doesn’t shake up the existing formula too seriously, once again splitting the gameplay between turn-based movement, action and diplomacy on the Grand Campaign map, which inevitably leads to real-time tactical battles when your forces and enemy forces clash. You’ll still find yourself raising armies, conquering settlements, building facilities and researching new upgrades, while handling trade and relations with rival factions and doing your best to maintain a working treasury. However, there are a few big new ideas here that add new layers of detail to Attila, and bring a slightly different flavour to the game.

The key one is the Horde mechanic. Attila’s Huns aren’t the sort of people to build settlements, work on their defences and think about establishing trade routes or advancing knowledge. They’re the sort of people who roam around, attacking anyone who sits still long enough, sacking their cities, then putting their people to the sword. That’s why our new chums, the Huns, operate in Hordes; a sort of combined mobile settlement/army that can switch state between encamped, raiding and migrating modes. Like armies, Hordes have generals and units, but like settlements they have facilities and upgrades. 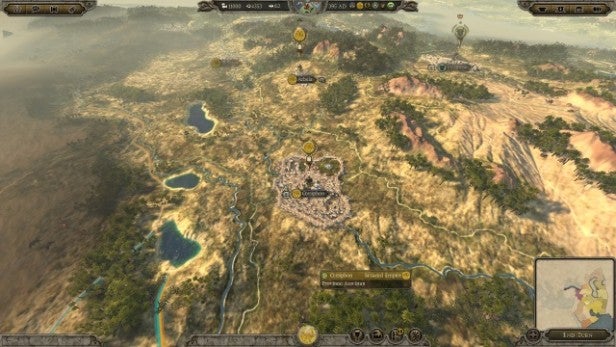 Playing as the Huns transforms the pace of Total War. It’s no longer a game of cautious expansion, but one where you need to play more aggressively, steamrollering vulnerable neighbours, looting or razing their cities, then moving on to the next. You’ll need to encamp to rebuilt your armies and climb the tech tree, but sitting still for too long makes you weak and prey to every faction that’s grown tired of your sacking and pillaging (which will be pretty much all of them). What’s more, the Huns aren’t what you’d call an economic powerhouse. An army that isn’t out slaughtering and looting is just a drain on the feeble Hun economy, so you need to keep them out there and nose to their bloody, gore-spattered grindstone.

The Huns and their Horde behaviour also affect the game when you’re playing against them. For one thing, they’re not the only faction that can take advantage of the Horde mechanics; other barbarian tribes that lose or abandon their last settlement can operate as a Horde instead. For another thing, all these Hordes have an anarchic effect on the Grand Campaign map, spoiling your cautious expansion plans with unpredictable incursions and attacks. 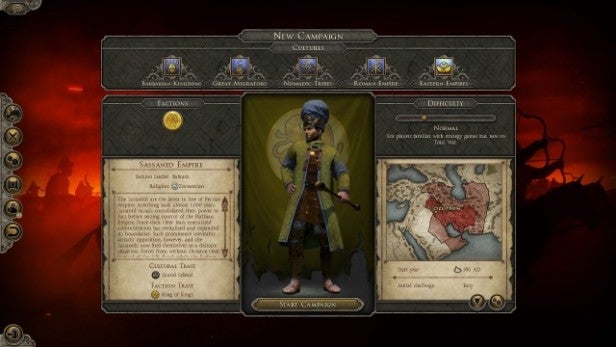 Beyond this, Attila introduces a new aspect to the campaign; internal diplomacy. Suddenly, your generals and officials aren’t just anonymous heads, but members or close associates of a ruling family, with their own ambitions, demands and squabbles to settle. Throughout the game you’ll be keeping them sweet – or stifling their grumbling – with a mixture of promotions, marriages, get-rich opportunities, threats and assassinations. What’s more, you’ll be faced with other situations where you can show toughness, leniency or leadership. Keep your faction in order and you’ll improve your chances of storming through the campaign. Allow turmoil, and you’ll lose your authority and eventually your power.

All this stuff is impressively detailed and absolutely fascinating, while Attila has its own distinctive atmosphere, where chaos and disorder seems to be around every corner. Yet the new additions also add more layers of complexity to both the gameplay and the interface – and Total War was hardly short on complexity to begin with. To be fair, Creative Assembly has not been blind to this. It’s created an engaging Prologue campaign that introduces you to the major concepts and controls, both old and new, while you’ll get advice and context-sensitive help throughout the early stages of the main campaign. Attila is even kind enough to remind you that you’ve left important tasks undone when you try to click End Turn. 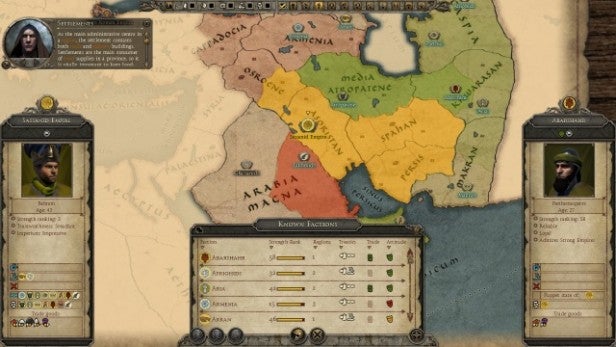 Yet for all the developer’s best efforts, there are an awful lot of plates to keep spinning here, and it’s really hard to keep track of your movements, enemy movements, internal ructions, external diplomacy, trade, the economy, resources, upgrades, tech research and recruiting without letting one or more of them drop and break. At times, playing Attila can leave you in a kind of mild panic, as if you’re taking a major exam on a subject where you’ve skipped half of the lessons then haven’t properly revised for. Even though the help is there, you need to remember where it is – and that you need it.

The unfamiliarity and tribalism of the period doesn’t help, either. Play Empire, Rome 2, Medieval 2 or Napoleon and you probably have some rough idea about who the main factions are, and what their strengths might be. With Attila, well, do you know your Ostrogoths from your Visigoths? Your Gepids from your Bastarnians from your Roxolanians from your Alans? You’re certainly going to learn a lot playing, but with 56 different factions on the campaign map, are you getting too much of a good thing? As you wait several minutes while all the other factions take their turn, then get attacked by the Sclavenians because you weren’t paying enough attention, you might be excused for thinking so. 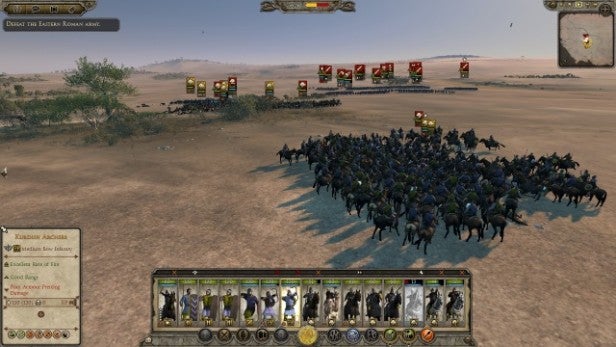 It’s all a bit easier on the battlefield, which is still where the series feels most at home. Enemy AI is smart and puts up a satisfying fight, there are some fantastic units to play with, and the pacing seems a little faster and the movement more flexible and organic. Some path-finding issues remain, particularly in siege situations, but generally speaking it’s easy to build an opening strategy then adapt it as things invariably go to pot.

The battles are thrilling, too, with some of the best cavalry action we’ve seen from the series, and superb use made of spreading fire and weather effects. You can still focus in on warfare by setting up custom battles or playing the historical reconstructions provided, and there’s a real sense of achievement in managing a tough engagement well, with maximum casualties on the enemy side, and minimal losses on yours. 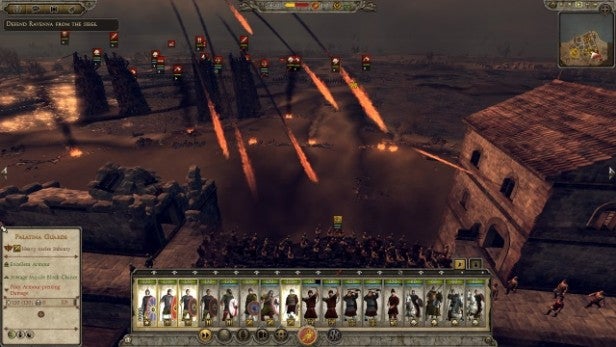 And while the campaign map looks great, with some lovely details that make it look and feel like more than a virtual gameboard, it’s in the battles that Attila looks its best as well. While close-up combat between hardened soldiers still has an unfortunate resemblance to a hopeless playground scuffle, there’s still something epic about watching a cavalry formation charge into a mass of spearmen, or archers firing volleys of arrows from the walls of a bastion under artillery fire.

In the end, Attila feels like a Total War to satisfy the core fanbase, and there really isn’t anything wrong with that. Some gamers will grumble that it’s too complex, or that core mechanics aren’t explained properly – and they won’t be wrong – but others will luxuriate in the challenge and in all that depth. If you have the time, the drive and the commitment, this is arguably the best Total War in a few years. Just be aware that you’re going to have to work at it. It’s not a game you’ll master or get much out of straight away.

Verdict
Attila adds new layers of depth and complexity to Total War, and its dark, chaotic atmosphere does a brilliant job of breathing life into one of Europe’s most troubled periods. The problem is that all that depth and complexity can make it a very demanding and – at first – unrewarding game. Keep at it, and the epic battles and challenging campaign mode make it well worth persevering. Overall, this feels like one for the fans, but is that really such an awful thing?