Toshiba’s eXtended Detail Enhancement (XDE) technology was originally introduced to fill the void left by HD DVD while the company figured out what direction it wanted to take in the hi-def market. A year later and Toshiba has sensibly decided to go down the Blu-ray route, but that doesn’t mean it’s turning its back on XDE technology – if anything, this advanced DVD upscaling tech is even more relevant, now that Toshiba has a proper hi-def player to complement it.


The technology, which first appeared on the XD-E500, analyses the entire SD source image, enhances edges to removes jaggies and boosts the sharpness of small details in areas where it’s most needed. Despite our misgivings about this player at the time, XDE worked a treat and helped deliver some of the most convincing ‘near hi-def’ pictures we’d seen.

But one of our main criticisms of the XD-E500 was the £130 price tag, which was expensive by upscaling DVD player standards, particularly when you could buy a Blu-ray player for not a lot more. Thankfully its successor, the XDE600, is more realistically priced at just over £70, and if its performance is anywhere near as good as the previous effort then this could be one of the best-value DVD upscalers around.


A hands-on inspection reveals that the XDE600 is a different animal to its predecessor. It’s lighter, slimmer and a bit more glamorous thanks to its swanky gloss-black finish and a sloping grey-tinged bottom edge, which is proudly emblazoned with the XDE logo. Tap the light-as-a-feather bodywork and the hollow sound doesn’t instil confidence, but it’s firmly bolted together and is certainly no flimsier than any other budget player on the market.

On the fascia you get a poor display panel that only shows the chapter number during playback, so you’re heavily reliant on onscreen displays to find out crucial playback info. A green LED indicates the selected HDMI output resolution and towards the right-hand side of the fascia is a cluster of buttons and a USB port.


On the back, Toshiba has squeezed in all the crucial connections. Of greatest importance is the HDMI output, which delivers those upscaled images to your display in pure digital form, but you also get analogue alternatives – component, composite and a SCART output.


Interestingly, the deck can also upscale NTSC discs to 1080p and output them at 24Hz, although being a Region 2 player this won’t be much use unless you get the deck modified (we’re yet to find a remote hack). It can convert PAL discs to NTSC and then allow you to activate the 24Hz mode, but this obviously results in horribly jerky pictures.


Completing the socket roster are optical and coaxial digital audio outputs for transferring raw Dolby Digital or DTS bitstreams to a home cinema receiver, plus a set of analogue stereo outputs.

The USB port on the front comes in useful for playing DivX, XviD, MP3, WMA and JPEG files without the need to burn them onto disc first, but unsurprisingly there’s no DivX HD or MKV support.


Of course, the star feature is XDE, which works using three different modes called Sharp, Colour and Contrast. As the name suggests, Sharp Mode boosts detail clarity but doesn’t take the blanket approach of most sharpening modes – it works out which parts of the picture actually need sharpening and leaves the rest alone.

Colour Mode looks at the movie’s palette and adjusts it accordingly to deliver the brightest and most natural looking balance, paying close attention to blues and greens. The Contrast Mode tackles the balance between light and dark parts of the picture and enhances them for maximum effect, which is particularly useful for bringing out detail during dark scenes – and once again XDE can actually discern which parts need boosting and which don’t.


You can only select one of these presets at a time, but when you select the Colour or Contrast modes the picture sharpness is also enhanced. But if you don’t like any of the settings then you can bypass them.


Elsewhere the XDE600 offers everything you’d expect from a DVD player, including a three-stage zoom and trickplay modes like repeat A-B, slow motion and frame-by-frame playback. The deck searches discs up to 100x normal speed and the Enhanced Audio Mode lends a more expansive ‘3D’ effect to stereo sound but its ineffective. 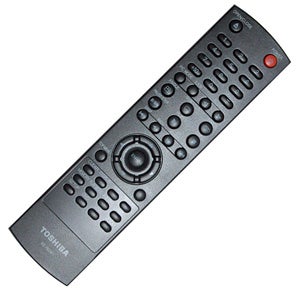 The onscreen display design is identical to the other Toshiba DVD players we’ve tested recently, apart from a jazzy splashscreen featuring the XDE logo. The setup menu is colourful and clearly sequenced, plus the responsive cursor keeps frustration to a minimum.


The all-black remote is nothing special to look at but boasts logical button layout and a few useful keys, including one for toggling through the XDE modes. The Display key brings up a transparent banner showing all the details that are missing from the front display (including the video bitrate).

So how much difference does XDE really make? To answer that we fired up ”The Departed” DVD on a Toshiba 47ZV635D TV (with all its processing deactivated) and discovered that the technology does an excellent job of enhancing upscaled pictures. In fact, they’re possibly the best we’ve seen from a DVD deck at this price.


Sharp Mode proves its worth right off the bat. In the ‘Off’ setting, pictures have a slightly hazy feel, but turn it on during shots of Leonardo Di Caprio being grilled in Martin Sheen’s office and it strongly emphasises the clarity of background objects, such as diplomas hanging on the wall and books propped up on the drawers behind him. It also throws the texture and detail of Leo’s face into sharper focus and gives edges more forceful definition, resulting in a beautifully clean and punchy picture.


We’re also impressed by the improvements Colour Mode makes to the picture. It cleverly boosts the vibrancy and brightness of the blue sky through the windows as Mark Wahlberg addresses the FBI agents without upsetting the balance of the other colours, even delicate skin tones.

But our favourite by far is Contrast Mode, which gives images a cinematic kick up the rear as well as sharpening up detail. Its effects are positively revelatory during dimly-lit interior scenes – when Colin takes Madeleine to dinner, and when Frank and French search Billy at the back of the bar, XDE suddenly allows you to make out shadows and objects in the surrounding scenery, which makes these scenes more enjoyable to watch without compromising their filmic depth and solidity. Without it, the backgrounds look like one big black hole.


But brightly-lit scenes also benefit – creases and folds on the sharply tailored suit jackets are boldly defined, and the boosted black level gives panoramic shots of the Boston skyline terrific depth and definition.


If there’s a weakness it’s noise reduction – there’s some grubby block noise on background walls, plus murky mosquito noise and a bright white halo is occasionally visible when dark objects are set against a light background. But these minor flaws don’t detract greatly from the benefits elsewhere.


It even does a grand job with the Silicon Optix DVD – the processing makes moving diagonal lines look crisp and steady and renders the flag test sequence with minimal stepping. It also reproduces the Detail clip with pleasing precision and crispness.


Sound quality isn’t a major consideration when buying a budget DVD deck but for the record the XDE600 isn’t bad at playing CDs, giving music an enjoyable tone that should suit undemanding tastes.


The XDE600 is one of the most impressive budget DVD decks we’ve come across thanks to XDE processing, which definitely gives it an advantage over most rival players in terms of colour, contrast and sharpness. Add the reasonable price, ease-of-use and generous connections into the mix and you’ve got yourself a DVD deck that’s well worth a punt – if you don’t fancy Toshiba’s forthcoming Blu-ray deck, that is…