The keyboard is a crucial, simple fundamental that somehow is frequently overlooked by laptop manufactuers, but we’re pleased to say that isn’t the case here. The 15.6-inch frame means that each key is generously spaced, and there’s room for a numberpad on the far right of the keyboard. If we were to be hypercritical, we’d say that the texture of the keys (a slippery, shiny plastic) isn’t the nicest we’ve touched, and the spacebar is a bit on the stubby side, but these are really down to personal preference.

In general, it’s a great keyboard. There was no learning curve in establishing where each key would be, and we were typing at the same speed we’re used to on a full sized desktop keyboard in no time. 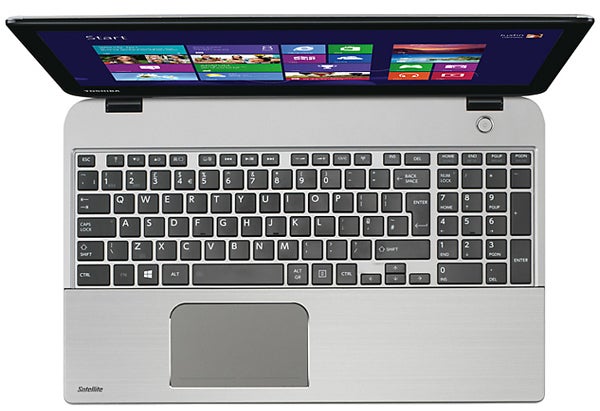 Sadly, the touchpad isn’t quite as good. It has the size going for it, meaning you can move the pointer from one side of the screen in a single movement comfortably, but the material feels a bit resistive to us — if only they’d swap the key material with the touchpad’s!

Left and right click is activated by pushing the whole touchpad in at the base of it, and it requires a reasonable push to click in. As a result we far preferred navigating by tapping anywhere on the pad to click, but obviously you can’t do that for right clicks, which is still a crucual way to navigate Windows.

Other than that, it’s a decent touchpad. Gestures are consistently pulled off, and scrolling and resizing pages comes pretty naturally.

While it’s not unusual for laptop manufacturers to pile on the bloatware on top of a Windows installation, we were pretty surprised with the amount of extras Toshiba puts on by default here. Alongside expected classics like McAfee security and WildTangent games, there’s a one-button Amazon button pinned to the taskbar alongside a couple of Toshiba’s own products: Tempro and Desktop Assist. On the desktop there’s even more Toshiba products as well as links to eBay, Dragon Assist Install and Spotify.

We’re going to hazard a guess that most users won’t want most of these, or won’t know they’re there to uninstall. Either way, we’ll always favour a clean OS installation and it’s disappointing — if not surprising — that Toshiba hasn’t opted for something purer. 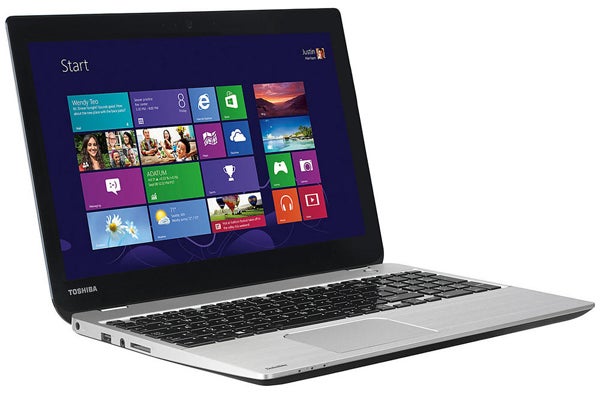 Retailing at £700, it’s pretty hard to fault the Toshiba U50T-A-10F provided that this is definitely what you’re looking for: a 15.6-inch Ultrabook is unusual, and many will see that as negating the point of the format. But the extra space is put to good use, even if the screen is weak and low resolution — a battery that lasts over seven hours and charges very quickly is something that any laptop buyer should look for.

In terms of alternative options, there’s nothing we’ve reviewed that is quite the same in terms of price, specs or size, so bear with us when we make a few suggestions that deviate from each point. For a similar price, with a bulkier frame but better games performance there’s the Toshiba S50t-A-118 — it’s chunkier, less attractive, no SSD, a little more expensive but comfortably able to run Crysis 2 smoothly.

Moving onto Ultrabooks, the Gigabyte U2442N performed decently with games back in March, but was backed with just a 14-inch screen. It was marginally more expensive then, so should be a similarly priced or lower by now. Depending on what you’re looking for, we think the Toshiba U50T-A-10F can stand proudly against most other laptops we’ve looked at, especially as it comes on at just £700.

A low resolution screen can’t dampen our enthusiasm for what is otherwise a nippy, attractive and good value ‘large’ Ultrabook.

For more alternatives, take a look at our Top 10 Best Laptops round-up