With the Ultrabook’s obsession of focussing on the small, it’s a little unusual to get a 15.6-inch model embossed with the ‘Ultrabook Inspired by Intel’ logo, but the Toshiba Satellite U50T-A-10F arrives in our office with just that. Priced competitively at £700, too. It’s ideal for someone who wants a powerful machine that’s slim enough to carry around, well-heeled students, families, or even office workers. It’s still a slim unibody design, even if it’s a bit wider, but will the larger frame give us a performance boost or a longer battery life? Let’s find out. 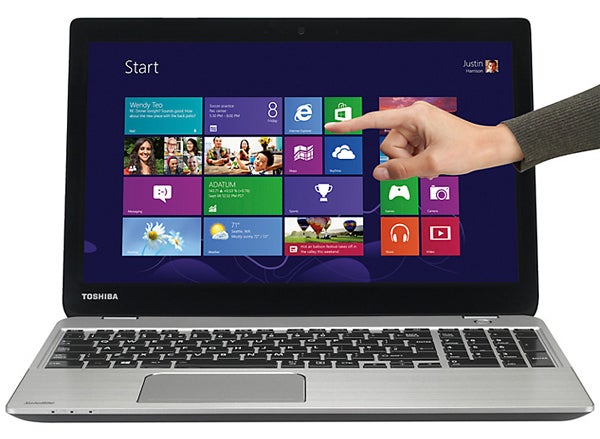 Although 15.6-inches across, the U50T-A-10F does maintain the thinness of the Ultrabook, measuring 21.3mm thick. There’s only minimal tapering so it maintains this uniform width almost all the way around. Closed it sports a minimalist design: brushed aluminium, with just a Toshiba logo in the top right hand corner. At 2.4kg it’s considerably weightier than your average Ultrabook, but then it does feel very solidly built as a result: in no way could you ever describe the U50T-A-10F as flimsy.

Opening it up reveals a well spaced, full-sized keyboard with separate numberpad and a generous touchpad without any physical buttons. The result is that short of the three removable brand stickers (Energy Star, Intel and Ultrabook, since you ask), only a small ‘Satellite’ logo and the power button disrupts the brushed aluminium finish.

The extra space means that connectivity ports are as fully featured as you would expect. The U50T-A-10F includes three USB ports (two USB 3.0 and one USB 2.0), a card reader, a combined microphone/headphone jack, an HDMI out port and an ethernet jack. No room for an optical media drive: standard for Ultrabooks, but we thought with the added real estate a 15.6-inch laptop provides, Toshiba might have managed to sneak one in.

On the surface then, it’s an attractive and premium design which looks stylish and feels built to last. Not what you’d expect in a sub £700 Ultrabook. 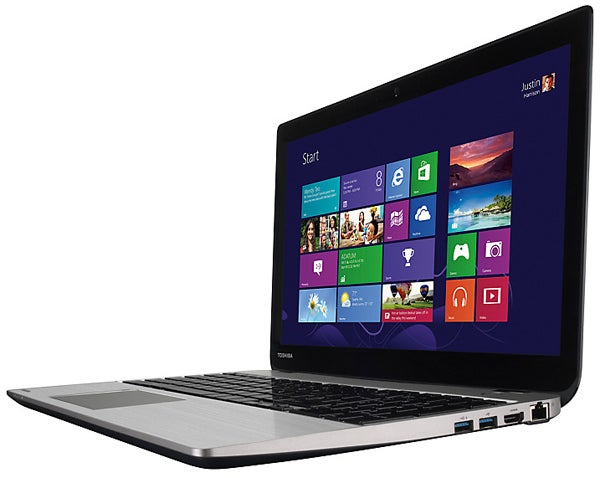 The most obvious compromise for the competitive pricing point is with the screen, and it’s a tough blow to the U50T-A-10F’s appeal. With a 15.6-inch screen, the 1366 x 768 resolution makes the whole thing feel stretched and unappealing. To put that in perspective, that’s a lower resolution than the Samsung Galaxy S4 smartphone (1920 x 1080), which has a screen around a third of the size. Smaller Ultrabooks sized 13.3-inches and under can get away with this (though plenty, like the 1920 x 1080 Sony Vaio Duo and 3200 x 1800 Samsung Ativ Book Plus, don’t even try), but it’s painfully obvious on a display this big, with icons suffering from jagged, blurry edges and the whole display lacking sharpness.

Elsewhere, the screen is equally unimpressive. The reflective nature of the display means that viewing angles are pretty limited before it becomes hard to see things clearly, and the colours feel a touch washed out. The brightness is equally disappointing, with not a great deal separating the lower levels from the top setting, which is pretty far from searing.

As a touch screen though, it works pretty well. That’s partly due to the low resolution and big screen size we were criticising above: the low pixel density makes navigating Windows 8’s desktop mode far less fiddly than it can be on small screens and/or high resolutions. The inclusion of touch isn’t all positive though; as we’ve seen in the past with other touch screen laptops, close inspection reveals a meshy grid like overlay on the screen that’s a little irritating.