The race to cram as many features as possible into mobile phones has become a bit like the frantic pursuit of ever faster processor speeds in the late Nineties. No sooner has one new development hit the market, then manufacturers are looking to outdo one another with something else. 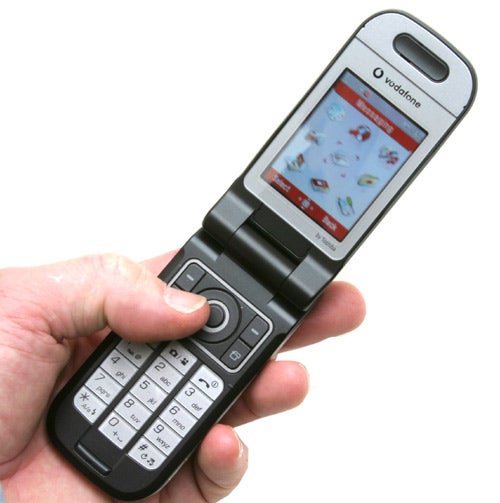 It feels a bit like innovation for the sake of it sometimes – for my money phone manufacturers should be concentrating on polishing their communications offerings before venturing forth into the world of entertainment. For now, though, the novelty of being to do everything bar freezing a bag of peas with your phone is shifting units and the latest 3G phone from Toshiba – the TS803 – is right at the forefront of the trend.


It’s a phone that James Bond’s resident eccentric weapons and gadget meister Q would be proud of – on paper at least. There’s no stone left unturned here. Toshiba has managed to squeeze an MP3 music player, music video functions, streaming TV, video calling features and more into one single chunk of silicon and plastic. The only disappointment is that there’s no high-powered laser, tranquilliser dart or instant tripwire built in as well. 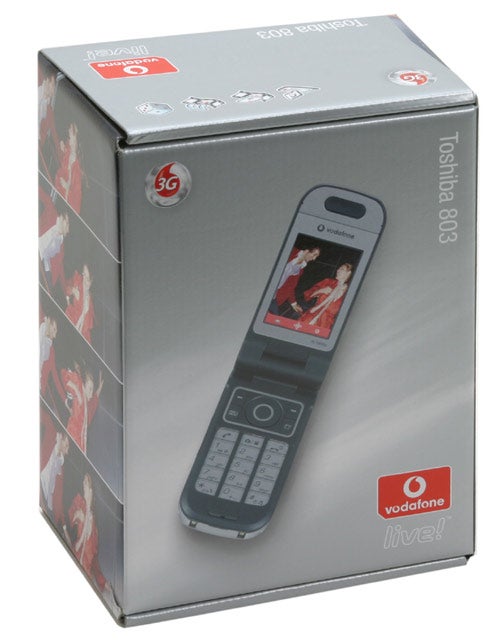 Our review sample came preloaded sample tracks and videos from the recent Oasis gig at Cardiff’s Millenium stadium – where the phone was launched – so it’s not hard to see what sort of a market Toshiba is aiming the phone at. With the TS803, Toshiba’s main target is music phones such as Sony Ericsson’s W800i, Nokia’s N Series phones and Motorola’s Rockr.


I was itching to try it out. Could it rival a stand-alone player? Would the sound quality be any good? Is there any point to watching TV and music videos on a mobile?

Let’s address these questions one by one. First, it’s good to see that Toshiba has given serious thought to how to implement the tricky balance between MP3 player and phone. It has decided to make all of the TS803’s music-playing features available on the outside of the the clamshell, a nice touch which certainly adds to usability. The main control interface for the music player is a large, rectangular four-way directional pad on the front, and is actually rather good. It makes browsing your music an absolute doddle.

Track information is displayed on a 1.5in monochrome display with a rather snazzy white backlight. Volume controls are located on the left side of the device, and there’s even a hold key to prevent you accidentally kicking off Frank Sinatra’s greatest hits on infinite loop while the phone is in your pocket. If you flip open the phone you can create playlists on the go as well.


The phone comes supplied with a 512MB MiniSD card. That’s a little on the small side for a serious music player, but the fact that it’s removeable means you can at least upgrade if you want to. The memory card slot is easily accessible too. It’s not underneath the battery as it is on so many phones but on the right hand edge of the phone under a small plastic flap. 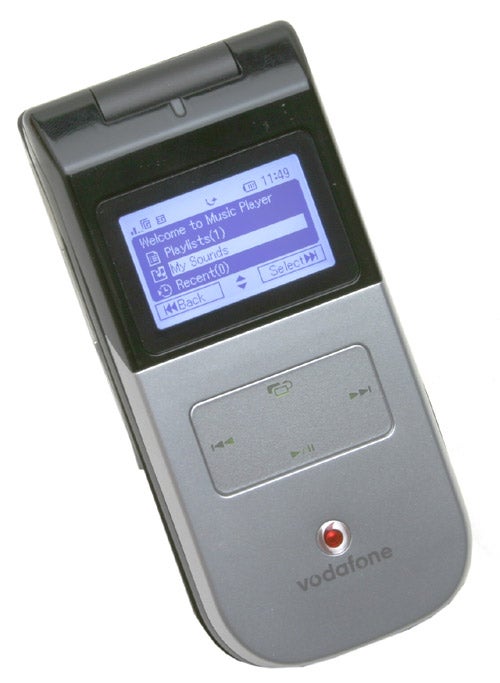 Unfortunately, that’s where the good news ends for the TS803’s music-playing capabilities. Its main problem is that it will only play DRM-free AAC and fixed bit-rate MP3 files and for a phone with serious music-playing pretentions that’s a big limitation. I tried loading some variable bit rate (VBR) encoded tunes, which give better sound quality for the file size and the phone simply refused to play them. More than a small irritation if, like me, all of the music files on your PC happen to be encoded in this way. On top of this, the phone only has a USB 1.1 connection so transferring tunes is slow.

Even if the lack of VBR and DRM compatiblity doesn’t bother you, the sound quality (or lack of it) certainly will. It’s both light on bass and very thin-sounding, even with tracks encoded at reasonably high bit-rate. This robs the Oasis tracks that came preloaded on the device of drive and depth and made listening for long periods tiring on the ears. Even dumping the supplied headphones for a better set doesn’t improve things.


Sound quality on music videos is even less impressive as hefty compression-levels kick in and, to be honest, I can’t much see the point anyway. If I desperately want to watch a music video I’ll switch on MTV or one of the umpteen other music channels when I get home.

Watching TV on a phone, bizarrely, makes a touch more sense. If you’re out and about and want to catch the football results, a news bulletin, or you just want to catch a snatch of your favourite soap, it’s perfect – as long as you’ve got a strong signal the 3GPP video streaming works a treat. It’s just a shame there aren’t more channels available right now.


Having established that the TS803 doesn’t really have the credentials to be anything more than a distinctly average music player, and that watching music videos on it is about as exciting as being the designated driver at a booze-up in a vineyard, all that’s left to do is assess its capabilities as a Bluetooth-enabled camera phone and it’s not great news for the Tosh here either. 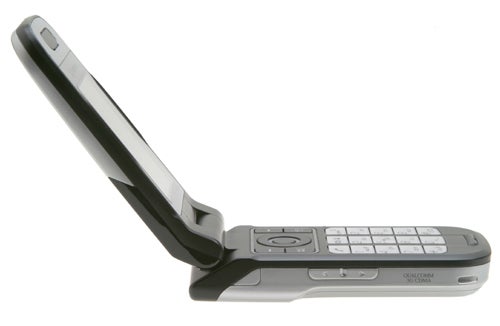 The TS803’s main problem is its size. It’s one of the chunkier 3G phones around, rivalling even the Sony Ericsson V800 in the wearing-a-hole-in-your-pocket stakes. The design isn’t exactly the last word in telecommunications chic either, though I did love the snick the clamshell hinge makes when it’s opened and closed. Strangely the TS803 also lacks a video camera on the inside, which makes video calling (one of 3G’s supposed raîson d’êtres) a bit pointless. 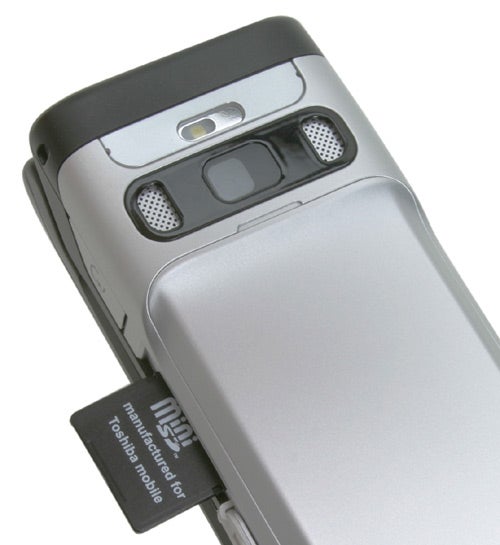 Fortunately its large size does have have some upsides. Not only does it mean that the keypad buttons are large and easy to get at with your thumb, it also means that the phone is big enough to wedge between your cheek and shoulder reasonably comfortably, and it means there’s plenty of room to fit a lovely, bright 2.1in colour screen in, which is excellent for viewing photos on (the TS803 also packs a 2.26 megapixel digital camera), Build quality, too, is good – the TS803 feels solid as a rock. 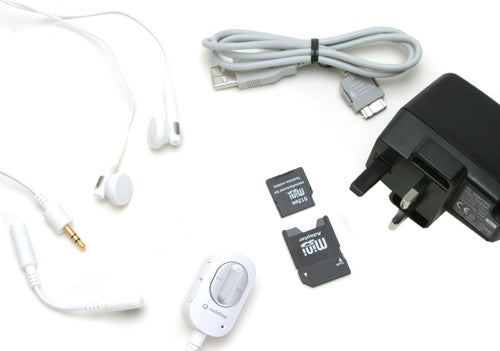 Battery life seems reasonable as well. In three days of moderate use listening to music, watching downloaded videos, taking pictures and making phone calls I only had to charge it up once, which in my book is acceptable. I’m betting that watching more than the odd few minutes of telly on it, though, will soon have you hunting for the nearest plug socket.


This is the second 3G phone we’ve seen from Toshiba recently and it’s the second one we’re not too keen on. While it makes an admirable stab at combining personal entertainment with communications in the end it feels like too much of a compromise on too many counts.


It may be well-built, easy to use and have every feature you can possibly think of. It might be available for free from a tariff of £30 per month. But it’s also too big, doesn’t have proper video calling features and its MP3 capabilities seem poorly thought out.