Toshiba showed-off the 7in version of its Thrive tablet at CES 2012 in Las Vegas. The 10in version hardly made an impact following its US release last year, but can a smaller version do any better? We took a closer look to find out. 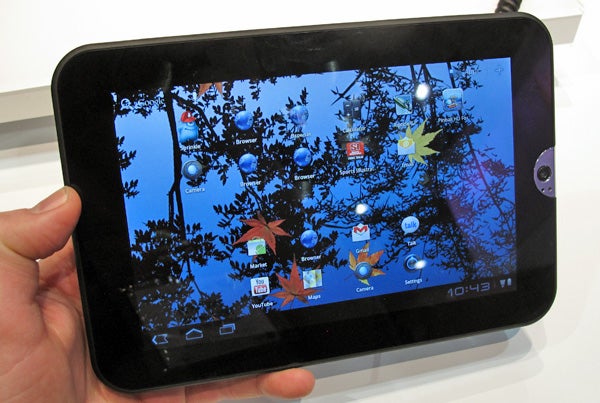 Unlike the new 10.1in Toshiba Excite X10, the Thrive 7 isn’t incredibly slim. Its design seeks to bring the tablet a reassuring chunkiness rather than getting you to believe you could get a paper cut from its razor-thin frame. The back is soft-touch plastic, with an almost corrugated finish. At 11.9mm thick, it’s hardly obese, but it really isn’t trying to shave off as many picometers as possible. 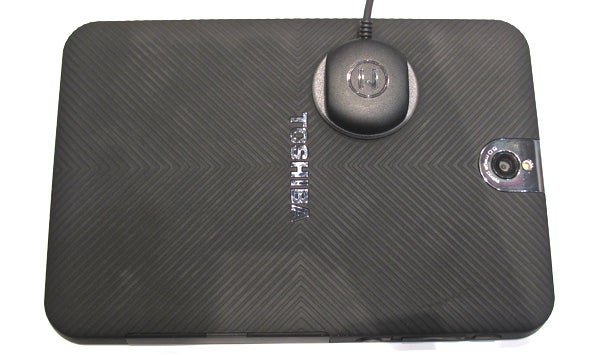 Thanks to its 7in form, this cute-n-chunky approach works in the Thrive 7’s favour. At 400g, it’s light enough to use one-handed and the corrugated back offers a comfy grip missing from sleeker models.

As a relative chubster, we’re glad its sides try and keep the tablet’s look nice and simple. Like the original 10in Thrive, there’s an HDMI video output and expandable memory, but all the ports bar the proprietary dock socket are hidden under a plastic flap. The microHDMI, miniUSB and microSD sit side-by-side, next to the volume rocker and power button on the tablet’s left edge.

The dock socket is on the bottom, in-between the stereo speaker outlets. This opens-up potential for dock accessories – the official Thrive dock adds a full-size HDMI output, two full-size USB sockets and a 3.5mm audio output. This isn’t included as standard with the tablet, though.

The Thrive 7 uses the Android Honeycomb OS. Ice Cream Sandwich is already here, so it’s slightly disappointing to see the previous version on show. Its Tegra 2 1GHz Dual-core processor is also starting to seem a little old-hat, now that quad-core tabs are appearing.

We did notice a little lag in the tab too, more so than in its brother the 1.2GHz dual-core Excite X10. That said, with 1GB of RAM, it has as much power to call upon as the Samsung Galaxy Tab 10.1, and blasted its way through a session of 3D jetski racer Riptide with ease. 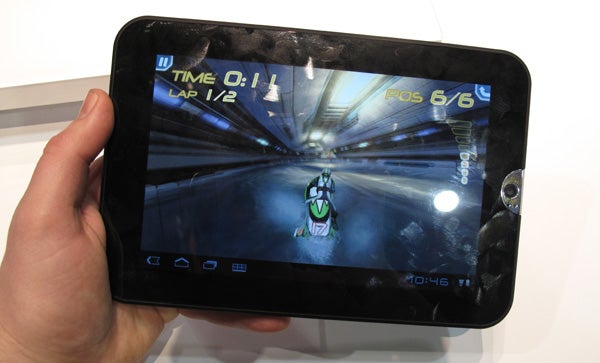 What we liked about the Thrive 7, over previous 7in Android tabs we’ve reviewed, is that it has a good-quality screen. Using an IPS panel and 1,280 by 800 pixel resolution, it thrashes the Acer Iconia A100, beating both its sharpness and general image quality. With a resolution matching today’s 10.1in tablets, its 215dpi pixel density offers a very sharp image. 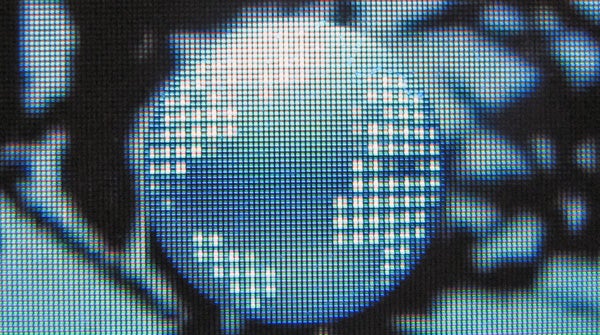 However, we can’t help but wonder if the Thrive 7 is way too late to make any impact on the market. Actually, scrap that, it is. Set to sell for upwards of £300, we can’t see this Toshiba luring many away from 7in tablets like the Amazon Kindle Fire – and the recently £169 “fire sale” of the BlackBerry PlayBook will have done it no favours either.

It offers a full feature set, with decent connectivity, a reasonable amount of power and dual 5/2-megapixel cameras, but it’s treading water in a market that has already proved to be less lucrative than was hoped back in 2010.

The Toshiba Thrive is technically proficient, with a good screen, decent connectivity and a design that, while not slick, feels comfy in-hand. However, it has arrived unfashionably late and lower-cost rivals are on our doorstep. It’s better than the other 7in Honeycomb tablets we’ve reviewed, but we can’t summon all that much enthusiasm for this water-treading tab.