Ever since the Apple iPhone pioneered the stylus-free, finger-friendly touchscreen smartphone, rival companies have released all manner of variations on the same theme with some being more successful than others. However, the new Toshiba TG01 is a truly unique take on the concept.


Based on a colossal 4.1in screen and incorporating Qualcomm’s much talked about new super fast Snapdragon chipset, its size and power make it more reminiscent of a traditional PDA or new fangled MID than a smartphone. However, at only 9.9mm thick and weighing 128g it is surprisingly pocket-friendly.


It’s also quite an elegant device with a classic, if rather unimaginative, livery. The back and sides are soft-touch black plastic, there’s a shiny gun metal trim round the edges, and three chrome buttons adorn the front. It’s only the orange square that is the Orange logo that disrupts the monotony of our particular model.

The back slides off (with a great deal of effort) to reveal a 1000mAH battery the SIM slot and a MicroSD slot. Annoyingly you do have to remove the battery to add or remove memory cards so transferring files to and from the TG01 is a slightly awkward process (though you can of course just connect the phone directly to your computer and do file transfers that way).


This is a process that’s made easier due to Toshiba’s use of a standard microUSB data socket (yes, we’ve whinged in the past about this becoming the standard when miniUSB did just fine, but now it is the standard it’s good to see it being used), which also doubles as the headset socket. A headset adapter is included in the box – as is an 8GB MicroSD card, a stylus, and a USB to microUSB adapter – and the sound quality from it is very good if a little lacking in bass.

The three buttons that run along the bottom of the handset are all touch sensitive and are quite responsive. The left most is the home button while the one on the right is a back button and in-between is a zoom bar. Sadly this only works with the web browser and not when viewing photos or emails, etc. It’s also a bit slow and temperamental making it very difficult to find the exact zoom level you want. 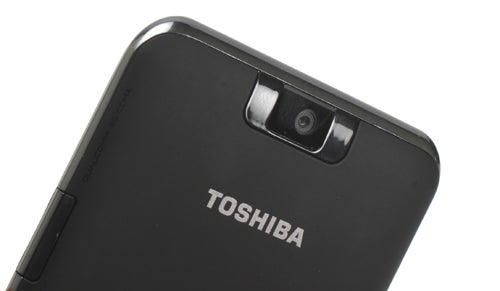 On the back is a 3.2-megapixel camera that can also shoot video at 640 x 480 but it lacks auto-focus or any form of flash. The application is also slow to load, shutter lag is significant, and the shutter button is annoyingly directly opposite the volume button so it’s easy to accidentally press the latter when you try and take a photo. Also, despite this being a 3G handset, there is no forward facing camera for video calls.

Getting back to that all important screen and Toshiba really has created something quite stunning. In terms of clarity, it’s use of a resistive touchscreen does mean it suffers from the slight milkiness that troubles all such displays but otherwise it’s bright, colourful, and very sharp. Indeed Toshiba has employed some of its TV technologies, including dynamic backlight control, colour matching, and dynamic gamma correction, to enhance video playback. The result is video that has deeper blacks, more vivid colours, and generally a greater sense of depth than on any other device we’ve seen, bar those that use OLED displays. It really is impressive stuff. 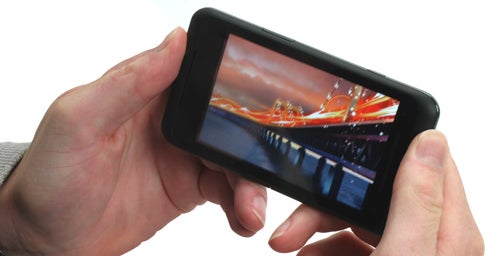 The combination of the screen’s sheer size and its resolution of 800 x 480 pixels also brings a whole other level of functionality to the mobile device world. Where something like the HTC Touch Pro 2 has a similar resolution, its screen is too small to use comfortably with your fingers. By contrast the TG01 almost doesn’t need all the fancy finger-friendly skins that have been crammed onto other Windows Mobile 6.1 devices of late because icons, menu options, scroll bars and such like are all large enough to comfortably hit with your finger on the TG01. 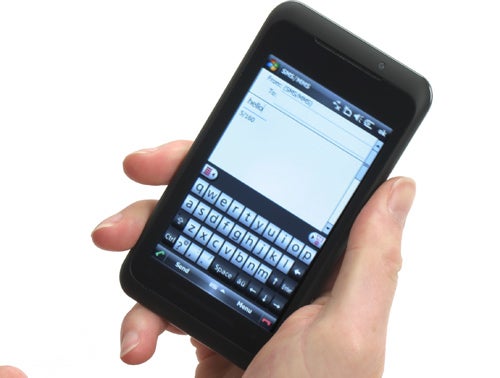 That said, the interface tweaks that have been made are very welcome. These include the ability to scroll by pressing anywhere on the screen and just dragging the ‘page’ around like it were a piece of paper rather than having to use scroll bars. There are also custom finger-friendly keyboards for easier touch typing, though these are particularly poor examples. 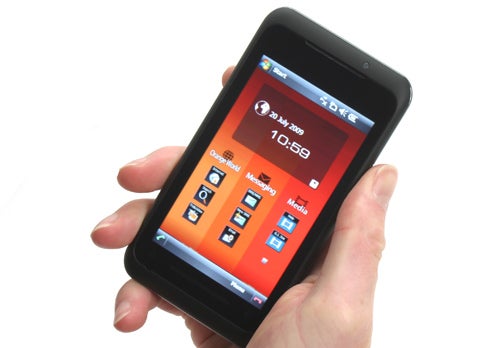 Toshiba has also implemented a custom home screen but this either needs to be ditched or heavily overhauled as quickly as possible. It uses an array of half a dozen ‘blinds’ to categorise various shortcuts to settings, applications, media, tools, and such like. The idea is that it shows three of the blinds at any one time and by swiping your finger across the screen you can flip along to the next blind. You can then extend the list of shortcuts on each blind by dragging it up the length of the blind. Now, this is a convoluted and ill-conceived concept right from the get go – essentially it’s just an overly complicated application launcher – but it’s made utterly rubbish by the fact its slow and difficult to use.


Once you add in the fact that this screen feels unresponsive compared to the capacitive ones of the iPhone, HTC Magic, and Palm Pre and you have a device that pretty much falls flat on its face in terms of usability. Any basic phone task like dialling a number, writing a text message, setting an alarm, and playing some music, is an absolute chore.

What does make up for this in a big way is this phone’s performance. The 1GHz Snapdragon chipset absolutely rips through Windows Mobile 6.1 in a way we’ve never seen before. All the standard windows menus and apps open instantly and most third-party programs load very fast as well, with a particular highlight being web browsers – we’ve never seen webpages rendered faster on a mobile device.

Unfortunately, even this aspect of the device is not without fault. We regularly encountered crashes and slow-downs and there was such a derth of native apps (and no app store) that out of the box it was difficult to take advantage of this speed. Another problem was battery life. That 1000mAh unit is just not big enough; only just giving us a day of ‘normal’ use, i.e. a bit of web browsing, listening to music, video watching, as well as several hours of standby. If Toshiba could have crammed in 1500mAh cell we think it would make all the difference. 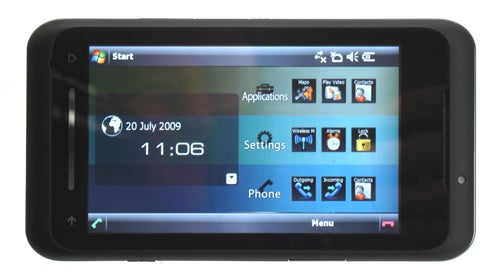 Still, the combination of a large screen, slim form factor, and lightening fast performance means we can actually see past this handset’s poor camera, crummy custom interface, sheer bulk, and poor battery life. In fact, we reckon if you’re the type of person that likes to tweak the OS, install custom interfaces, and generally completely revamp and tinker with your phone then the TG01 could be a great hardware base on which to do so.


The Toshiba TG01 is a peculiar device that will appeal to some as greatly as it appalls others. It’s a massive handset but it lacks a decent camera, or even a headphone socket. It runs Windows Mobile 6.1 with a very poor custom interface, and is consequently a pig to use for general phone activities. However, its enormous 4.1in, high-resolution screen, slim profile, and lightening fast performance, courtesy of its Snapdragon processor, means some will find it to be the perfect hardware platform to tweak to their own needs. 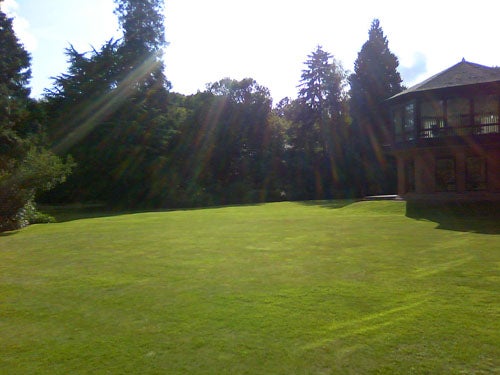 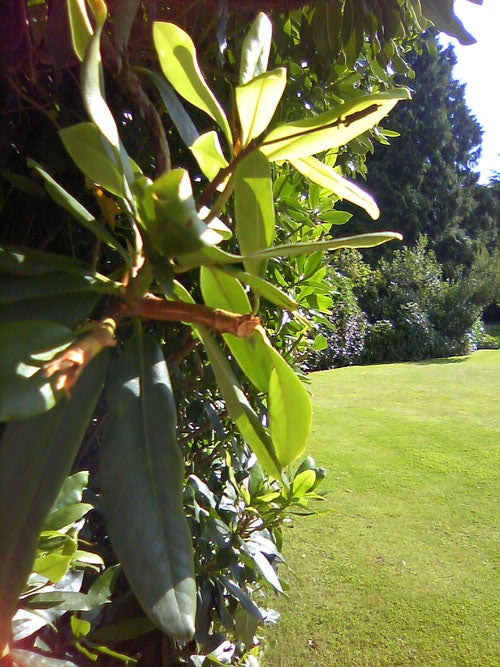 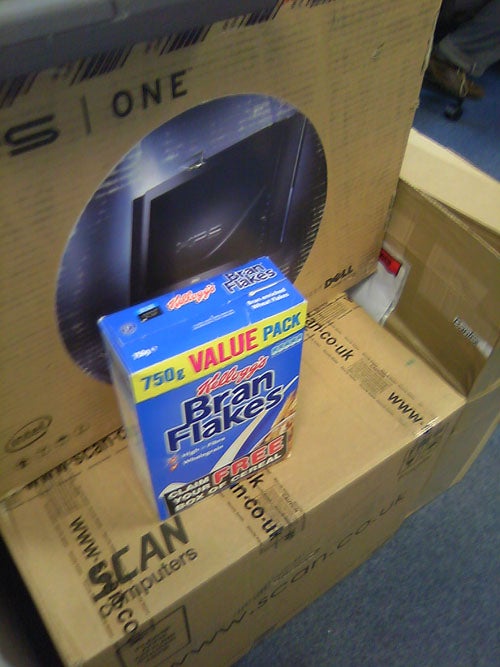