We’re fervent proponents of the latest and greatest digital cameras here at TrustedReviews, but there’s no point going snap-happy if you don’t have a way to show off all those pictures of your children, cats or possibly even panda acting in a suitably photogenic fashion is there? I am, of course, asking a rhetorical question because the only answer is a resounding “no, of course not”. 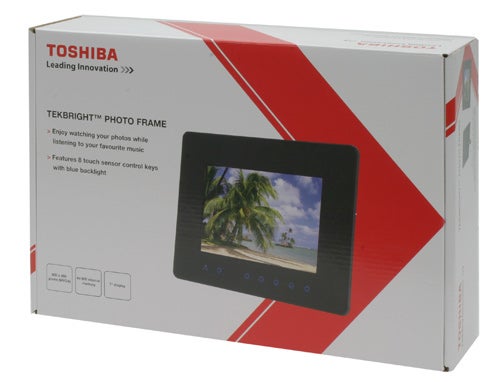 It is mainly for this reason that digital photo frames are becoming ever more popular. Not only do they allow you to quickly and easily show off your snapshots but they also mean that instead of a frame which contains but one photo at a time, you can display an almost infinite (well, large) number of pictures on rotation.


Not all photo frames are created equal though, so what does Toshiba bring to the table with the TekBright Photo Frame? Well, at first glance impressions are certainly good. The frame’s bezel, while perhaps a tad large, is finished in an attractive and very in-vogue piano black so it should fit in with just about any room’s décor, be that Chinese lantern orange or flamingo pink – not that I’m speaking from experience I hasten to add. 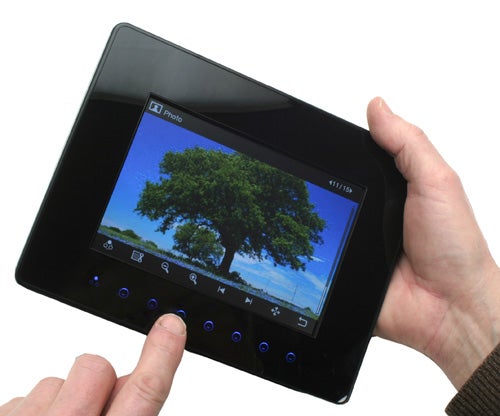 On the downside and to be fully expected this surface is an absolute magnet for finger prints which quickly litter the whole front surface. This means that if anyone wishes to take a closer look at the displayed images you’ll need a cloth handy to give the TekBright a quick once over. At least Toshiba hasn’t succumbed to the temptation to plaster the front of the frame with logos. Quite why so many manufacturers believe customers’ photos are likely to be enhanced by such an addition is frankly unfathomable so kudos to Toshiba for taking heed of that fact.


The TekBright Photo Frame has a stand such as it can be oriented in both portrait and landscape, although sadly there’s no automatic orientation of images, so if you want to show vertically-oriented pictures then you’ll have to remember to put them on the photo frame’s built-in storage or memory card rotated by 90 degrees.

Speaking of storage, the frame itself sports a fairly meagre 64MB of flash memory. However, it supports SD, SDHC, MMC, xD, CF, MS and MS Pro cards so you’ll have no problem getting your pictures to display, be that directly from a camera or transferred from a PC. If you are happy just to use the internal capacity then you’ll need to use the built-in USB to mini-USB cable. 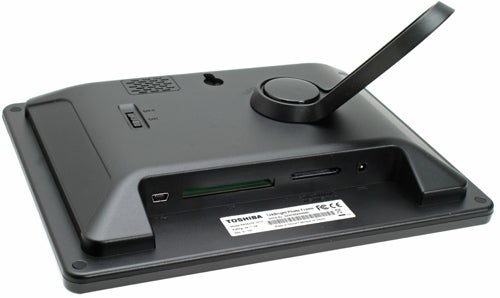 We’ve established, then, that getting pictures onto the TekBright Photo Frame is a simple enough affair, but getting them into a viewable state is a different matter altogether. The long and short of the issue is that unless you have your photos cropped and resized to the native 720 x 480 resolution of the panel they won’t display correctly but will instead be cropped to the bottom right hand corner. No prizes there then.


Common sense would suggest, though, that the majority of users aren’t likely to change what photos they wish to have on the frame. Thus, the few minutes effort required to edit shouldn’t pose too frequent an annoyance. In terms of formats, the frame will support either JPEG or Bitmaps only, but realistically the former is likely to be the only one ever likely to be wanted. 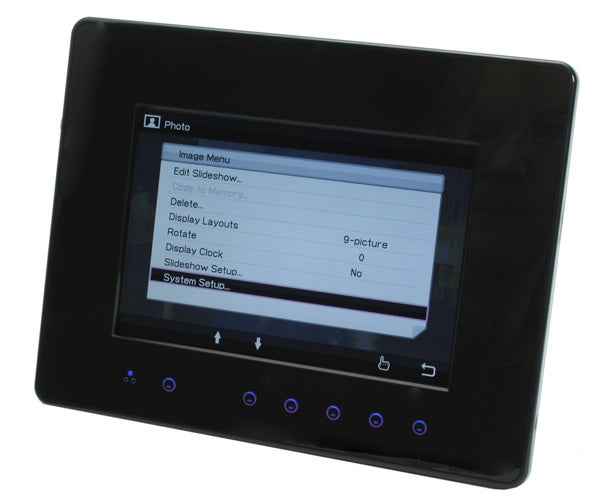 As a curious addition, found hidden at the rear is a small speaker. Further inspection reveals that the frame has a special “Music” mode whereby you can accompany your slideshows with a whopping 1W of tinny, strained music. Yes, that might sound a tad harsh, but the audio reproduction is nothing short of shockingly bad at anything other than what is best described as “lift music”. Arguably that is exactly the kind of audio accompaniment that a picture frame would want to be producing anyway, but in all honesty Toshiba would almost definitely have been better off knocking a few quid off the asking price and saving itself the effort.


Making up for that shortcoming is the navigation and interface on the TekBright. While I’ve never been a big fan of touch-sensitive buttons, Toshiba’s use of them in this case isn’t nearly the profanity-inducing experience initially expected. These buttons are located on the lower front bezel of the frame and are illuminated in a pleasing blue from behind. However, after a short period without use this lighting will turn off, the buttons then require a single tap to be reactivated. It’s a simple feature but a pleasing one.

When you first turn on the TekBright it starts in photo mode and various buttons start or stop the slideshow mode, navigate manually between images enter the settings menu or, by hitting a single, dedicated, button, swap to either Music or Calendar mode. The former of these is, as one might guess, where you can navigate between various tracks and set them playing, to visual accompaniment should you so wish. 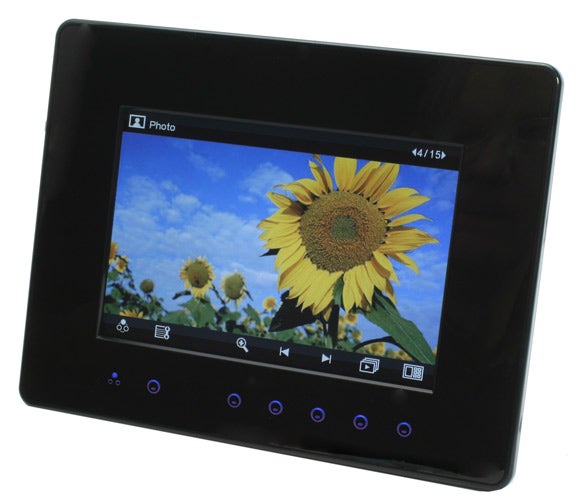 Calendar mode is a simple calendar display which is overlaid on top of the last image selected in Photo mode. It’s probably worth noting that to fit a decent sized calendar on the display this is a landscape-orientation only function. Not that this should be construed as a problem, merely an observation.


Whisking into the TekBright settings (again, only usable in landscape) there is a small, but reasonable set of adjustments. From here you can adjust such options as the volume of the speaker, the brightness of the screen and the transition effect between images. There are but four of these effects, and one in particular, fade, seems rather a misnomer as what it actually does is stutter painfully from one image to the next. 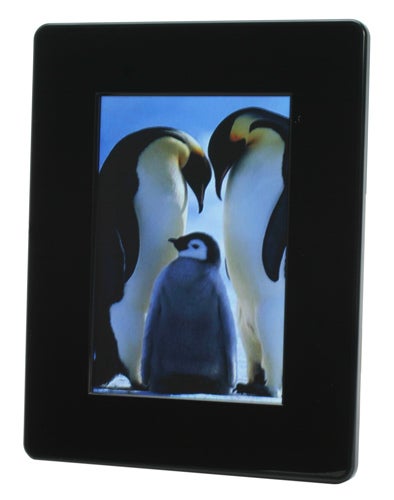 Once static, the quality of the pictures from a reasonable and realistic viewing distance isn’t displeasing. As with any LCD display, viewing angles don’t compare to a ‘real’ photograph but for all but the most discerning viewer the reproduction is as good as can be expected for the price.


In fact, pricing is probably the biggest factor in the Toshiba TekBright’s favour. At around £75 depending where you look there’s no denying that compared to rivals it is hitting a very competitive level. It may not pack the features of the Philips 9FF2M4 or the style of the AG Neovo FotoVivi V10 but at around half and two thirds the price respectively it doesn’t really have to. If you’re just looking for a simple digital photo frame solution then you’ll probably be able to forgive the TekBright its shortcomings and just as probably be fairly pleased should you bite the bullet and purchase one.


It’s not big and it’s not clever but the Toshiba TekBright Photo Frame manages to hit an attractive price point, so it doesn’t really have to be. It looks the part and the shortcomings it does have aren’t likely to be of much concert to the average user. Just remember there are other, better options around if you’re prepared to pay the price.