Alongside hover boards and jet packs, watching live TV on your travels is one of technology’s Holy Grails, which is why Toshiba has potentially hit pay dirt with a machine that not only allows you to watch Lorraine Kelly on your morning commute, but also plays DVDs when you’re in the mood for a movie.


That’s right; the SD94DT is a portable DVD player with a built-in Freeview tuner, both of which are viewed on the unit’s integrated 9in, 16:9 screen. It’s a great idea, giving you more choice of stuff to watch on long journeys as well as giving the kids their own little screen if (ok, when) Mr Tumble and Ben 10 start driving you round the bend in the living room. 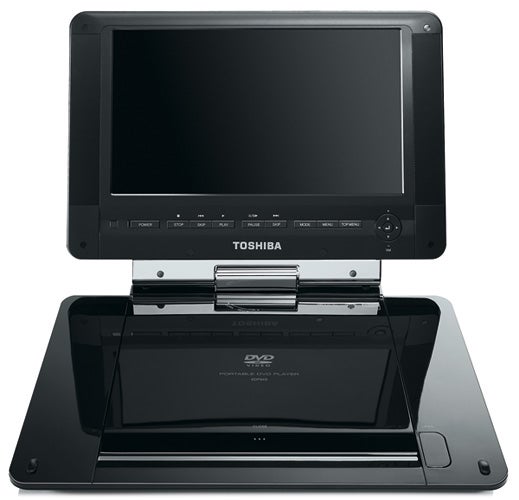 All of this tasty tech is wrapped up inside an attractive fold-up casing, styled from top to toe in a glossy white finish. When folded up it’s remarkably slim and light even with the ultra-thin battery attached – always a bonus with portable products – and when you whip open the lid you’ll see the black-framed screen with a speaker down either side, and a bevy of buttons running below it. These control everything from DVD playback to menu navigation and are clearly labelled for their intended purposes. The screen can be swivelled 180 degrees and bent back to rest on the base for ‘tablet’ style viewing.


The lower section houses the disc tray, which pops up unceremoniously when you hit the button on the right. Overall the unit feels a little plasticky and doesn’t feel like it could withstand more than a few rigorous knocks and bumps – as an owner of a beautifully built, still-working Toshiba portable from about six years ago, I’m a little disappointed by the gradual drop in portables’ build quality over the years, but then again how else would Toshiba have continued dropping prices?


Along the right-hand side of the unit you’ll find two headphone jacks for shared listening, and AV output for piping pictures and Dolby Digital sound to an external TV and/or sound system alongside an input for watching external sources on this screen. On the opposite side, you’ll find an SD card slot, which supports vanilla SD cards and, er, strawberry SDHC cards plus the all-important input for the supplied portable aerial. This clicks into place securely – you don’t have to screw it in as you do with some portable antennae.

The onscreen menus are basic and generic but do a generally good job of presenting their information. The blue/yellow main menu lists the options down the left with a screen showing live TV on the right. You can edit TV channels, check the installation settings, set the factory default and, if you’re really sad, check which version of the software is being used. 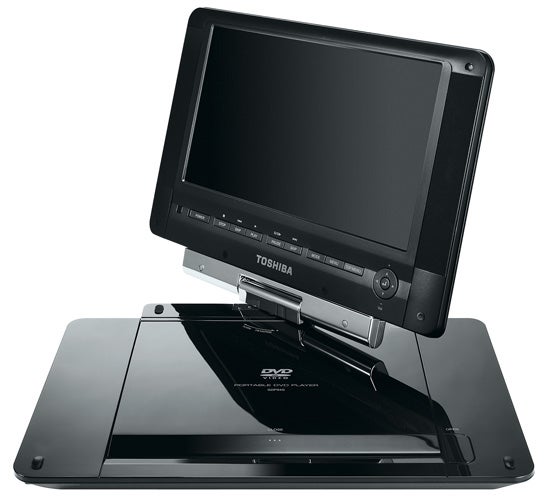 There are three groups of settings here – one for the screen, one for the onscreen menu itself and one for the rest of the system. In the latter you can select from five sound EQ presets, turn virtual surround on and select which type you want (Concert, Church, Passive, Live). In the ‘TV’ menu, you can set the levels of brightness, contrast, hue and saturation of the screen. Elsewhere there’s a separate setup menu for DVD playback, which includes additional Enhanced Audio Mode (EAM) and Dynamic Range Control settings.


Features-wise, there are a few other goodies to report. First up the deck will play DivX, JPEG and MP3 files from SD card, DVD or CD, but not anything as exotic as DivX Plus HD or MKV. Battery life is quoted at four hours, and in the box you get a car adapter, headphones, carry case, mains adapter and of course the remote control. 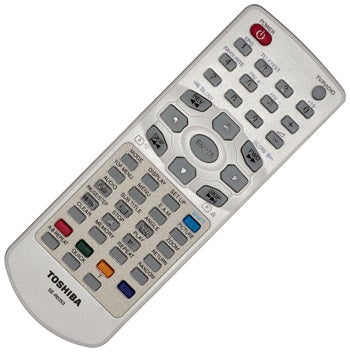 This zapper is the source of the unit’s biggest operational problem. It’s small and compact but Toshiba has still tried to cram in as many tiny buttons as possible, leaving it really cluttered and fiddly to use. Stripping it down to the basics would have been the way to go. Also, controlling these menus is a bit counter intuitive given the software’s insistence that you press Enter to return to the previous menu rather than providing a ‘back’ button. As a result, you have to press the right direction key to select options. Weird. Also, play and stop are buried away among the masses of buttons at the bottom, separate from the rest of the playback keys. To switch between TV, SD card and DVD you have to hit the mode button either on the player or remote and select the relevant option from the menu.


Spec-heads are probably wondering what the player’s vital statistics are, so we’ll tell you. Brightness and contrast ratio are quoted as 250cd/m2 and 500:1 respectively, but the one that’ll have the greatest bearing on performance is the 640 x 234 screen resolution. It doesn’t take Carol Vorderman to work out that that’s quite a lot lower than the resolution of your average PAL DVD, which means the image has to be downscaled to fit the screen. The result of this is a visible pixel structure, soft, ill-defined edges and hazy detail, particularly during dark scenes.

The impact of the screen’s low resolution and resultant downscaling becomes instantly apparent with the DVD version of ”Avatar” – Pandora’s luscious rainforest detail is reduced to a mush of hazy jagged lines and indistinct swathes of green. You can still make out what’s going on, and because pictures stay on the right side of watchable, unfussy eyes won’t have much to grumble about, but we have seen portables with better looking pictures than this. On the plus side, colours are bright, radiant and as believable as bright blue aliens go plus motion tracking is smooth. 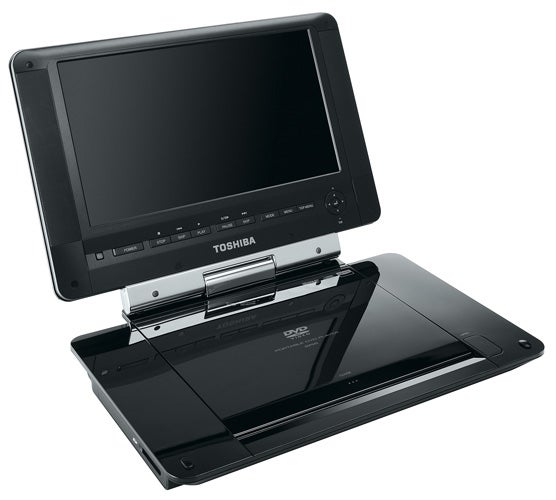 Despite trying various spots around the house and garden – even the age-old trick of holding it up in the air (as if the length of an arm will make a difference) – it still wouldn’t tune into any TV or radio channels. That’s a shame as we’re unable to test out the very thing that makes this player so special, but it does tell us something about the sensitivity of the built-in tuner and quality of the supplied aerial we suppose (I usually get a strong Freeview signal). In any case, it’s likely that DTV pictures will suffer similar problems to DVD on that low-res screen.


With sound it’s the same old story – the speakers produce thin, tinny audio that really doesn’t inspire much excitement, but when you plug in a pair of cans all suddenly becomes clear – MP3s are best enjoyed in this way too. Although lower-res DivX movies are better suited to the screen than DVD, they still look a bit hazy, and the same goes for JPEG images, which are also beset by jagged lines.


All in all the SDP94DT is a nice idea, offering DVD and Freeview in one handy device, and for the most part it’s well realised. It’s just a shame that the Freeview tuner wouldn’t play ball and that the low-res screen lets the side down, although it’s worth remembering that with portables, performance isn’t the be all and end all.