The popularity of portable DVD players may have been diminished by pocket-sized MPEG-4 players but that hasn’t deterred the likes of Sony, Philips, Panasonic and Toshiba from launching new disc-based decks. And why not? After all most people have loads of DVDs in their collections and it would be a shame not to watch them on the move. What’s more, portable players get slimmer, sexier and more talented every year, not to mention cheaper – as Toshiba’s keenly-priced SD-P91S demonstrates. 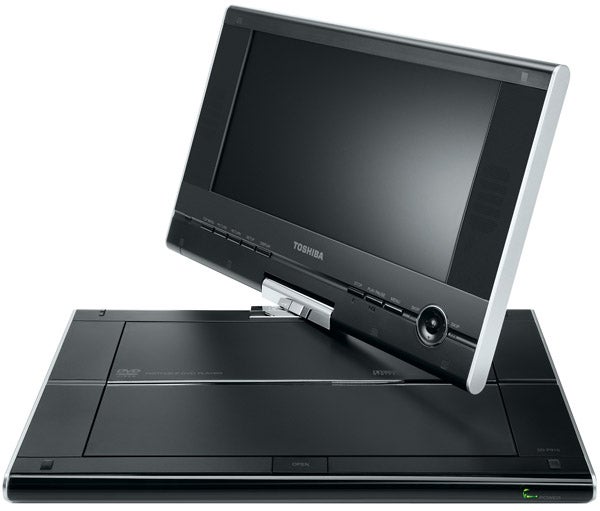 We recently checked out Philips’ dual-screen PET712 but the SD-P91S is a different animal altogether, using the more traditional single-screen, flip-top design. Looks-wise it follows the general trend of previous Tosh portables with its brushed black finish, which Toshiba has jazzed up with a silver trim down both sides and a silver hinge for the flip screen. Not only does it look stylish, but its build quality is also pleasingly sturdy. 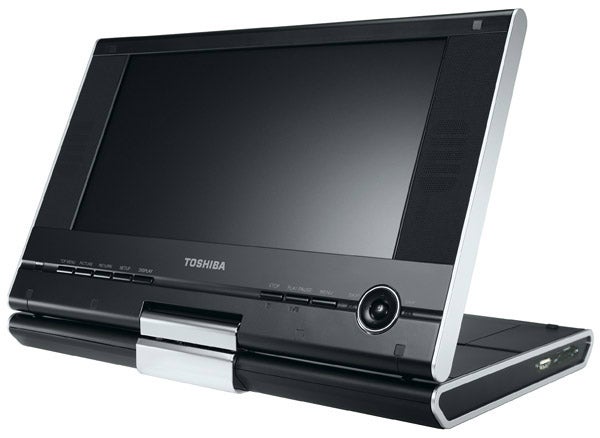 The screen is a reasonable 9in (16:9 of course) with a resolution of 640 x 220 pixels, but Toshiba also offers a 7in model, the SD-P71, which you can find for around £100. The screen is set into the top section with speakers on either side, and below it is a neat row of black buttons that allows you to control disc playback and access the setup menu, next to a cute circle of menu navigation controls. But the best part is that this entire top section can be swivelled through 180 degrees in case you’re viewing the screen from an awkward angle, perhaps in the back seat of the car, and it also tilts back until it lies flat.

The SD-P91S’s connections are generous for a portable player. Down the right-hand side are two headphone ports for shared viewing, a 3.5mm coaxial digital output that allows you to pipe Dolby Digital and DTS bitstreams or PCM to an AV receiver, an AV minijack output for watching the player’s pictures on a TV, and an AV input for watching external devices on the 9in screen. Both AV sockets offer composite video and analogue stereo signals and there’s a minijack adapter cable in the box (as well as a pair of headphones). 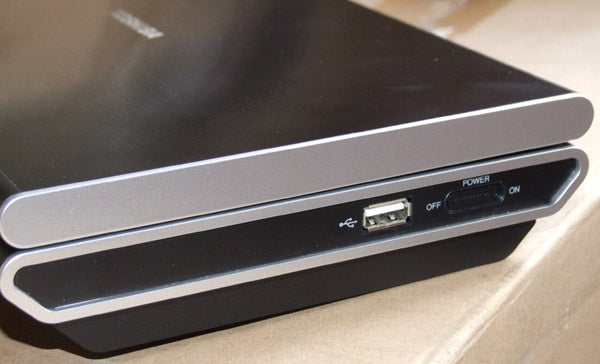 The left-hand side offers a USB port – not found on the SD-P71 or the Philips PET712 – which expands the unit’s playback talents beyond DVD. You can play DivX, MP3 and JPEG files from a flash memory drive, which is far more convenient than burning them onto a CD or DVD, although the unit will also play back these files from disc.

If watching at home, the SD-P91S can be powered from the mains using the supplied AC adapter, or you can run it off your car battery using the supplied cigarette outlet adapter. But for viewing elsewhere, there’s a battery that neatly clips onto the bottom of the unit and powers the player for around five hours when fully charged, which is about two whole movies – excellent stuff.

Elsewhere there are a couple of other interesting features. The Enhanced Audio Mode (E.A.M.) attempts to expand stereo sound from the built-in speakers or external two-channel systems for a wider soundstage. You can also manually tweak the brightness and contrast levels of the picture (using the Picture button on the remote), toggle through the various aspect ratio modes (Wide, Auto and 4:3) and flip the picture. There’s also a three-stage zoom for getting up close and personal with favourite scenes and a scan mode that goes up to 16x. 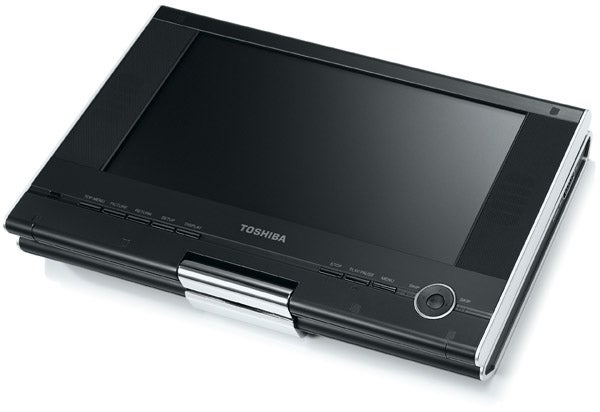 Like the Philips PET712, the Toshiba’s setup menu looks basic but proves perfectly functional when carrying out simple adjustments. Coloured in pleasing shades of blue, the different pages are helpfully grouped with tabs down the left, and the cursor moves around quickly. During playback there’s a useful display that shows all the information about the current disc plus the video bitrate. 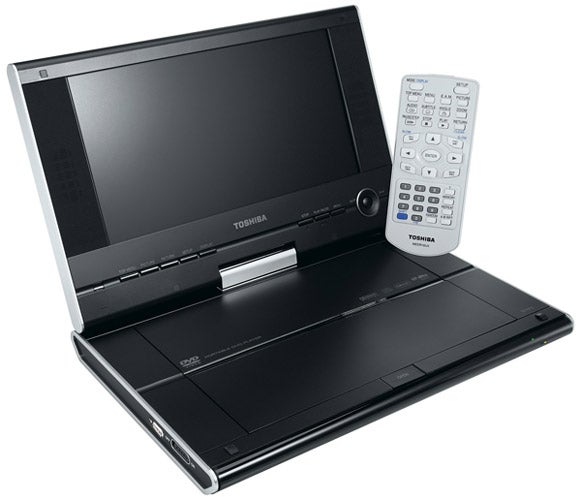 The unit is supplied with a credit card style remote with rows of small buttons at the top and bottom, and a raised section in the middle sporting the menu controls. It’s not bad but quite fiddly when accessing some of the lower buttons, and the use of a shift key for certain functions is a bit annoying.

As for performance, the Toshiba offers generally enjoyable pictures but like many other portable DVD players (including the PET712) the screen resolution is lower than that of DVD, which means it’s not particularly good at resolving fine detail. With ”Spider-Man 2”, for example, the removal of pixels during the downscaling process makes brickwork on buildings look hazy and indistinct, while patterns and textures lack focus and seem shimmery. The visibility of the screen’s pixel structure also gives the image a gauzy look and lends a jagged effect to edges, particularly on moving objects.

But see past that and there’s much to enjoy. Sam Raimi’s comic-book colour palette is handled with an impressive level of vibrancy but no edge bleed, and skin tones look natural. The afore-mentioned lack of pixels makes colour transitions seem a bit blocky but generally colour performance is impressive. The player also does a great job of making the picture look clear and well contrasted during dark scenes.


The screen is much better suited to low-resolution DivX material, and made the selection of trailers we played back from a CD-R look great, and they played back without any glitches. We also tried a range of other MPEG-4 video clips and compressed audio files and it welcomed most with open arms, although it steadfastly refused our WMV and WMA files. 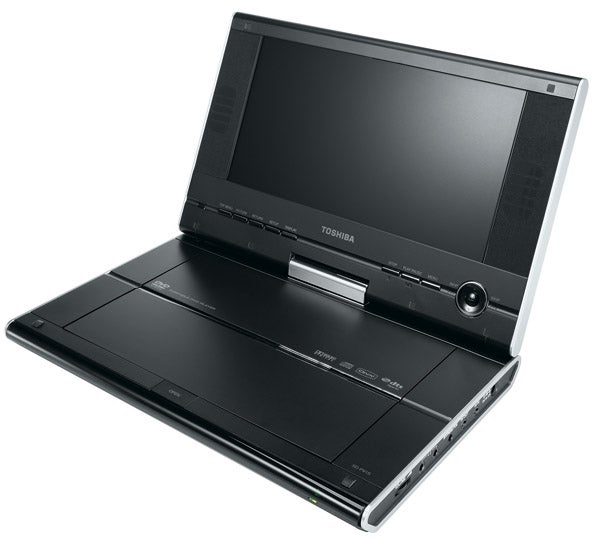 Sonically, the built-in speakers do an OK job with the frenetic ”Spider-Man 2” soundtrack, but the scene in which Spidey scraps with Doc Ock on top of the train proves a bit much for its poor little circuits to cope with and reduces the potent bang and crashes down to pops and hisses. Our advice? Grab yourself a good pair of cans, which allow the unit to deliver crisp and punchy sound quality with music as well as movies.


We’re big fans of the SD-P91S in most respects – it looks sleek and suave, boasts decent format compatibility and the USB port is a nice bonus. The only problems are the usual picture artefacts caused by shoehorning a DVD picture onto a lower resolution screen and the tinny speakers, but despite these, the quality is still good enough to keep you entertained while you’re out and about – and at the end of the day that’s the most important thing.