Although portable DVD decks are still a popular way of watching films on the move, their future could be under threat from portable Blu-ray players, the first of which was unveiled by Panasonic at this year’s CES. When Toshiba unveils its new range of UK home entertainment products later this month, it’s a safe bet that portable Blu-ray players won’t be on the agenda – but that’s not necessarily a bad thing, considering that Toshiba makes some of the best portable DVD models on the market, as we found with the SD-P91 – a stylish unit with a 9in screen. 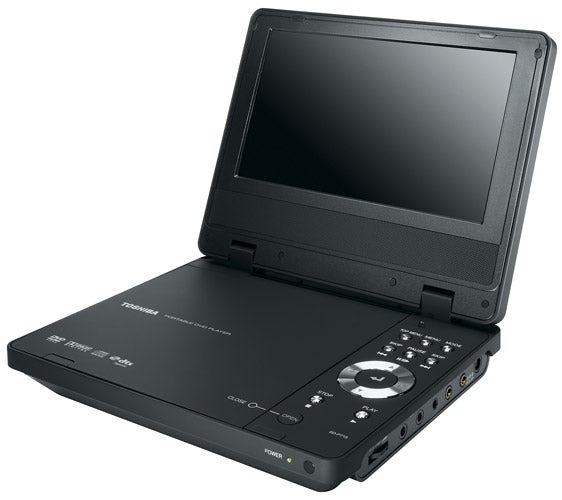 Joining this player in Toshiba’s current range is the SD-P71S, which features a smaller 7in, 16:9 LCD screen with a 480 x 234 resolution, but this isn’t simply a scaled-down version of the SD-P91 – the design is completely different. After pulling it out of the box, the first thing that jumps out is the all-over rubberised finish, which gives the unit a pleasing robustness and makes its build quality seem better than the pricier SD-P91S. It’s still light and compact, even with the detachable battery pack attached to the rear.


Like the SD-P91S, the 71S features a flip-up screen, but unlike its bigger brother the screen doesn’t swivel. The built-in speakers are located below the screen on the top half and on the lower section you’ll find all the buttons you need to navigate menus and control playback, and their silver colour juxtaposes stylishly with the black finish. The rest of the lower section is taken up by the lid of the disc tray, which pops up at the touch of a button. 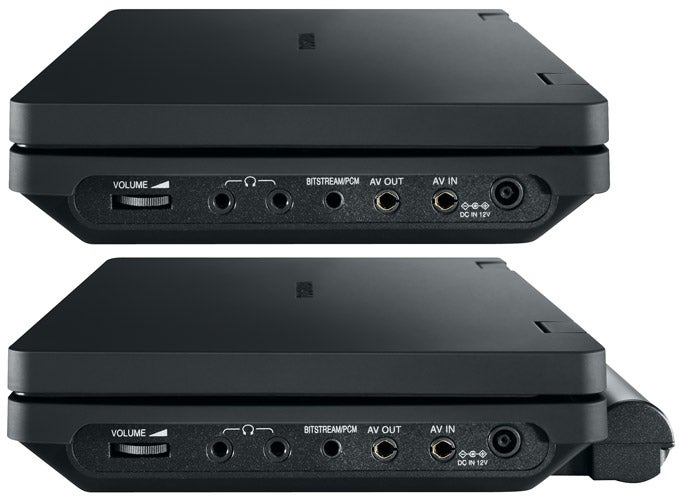 The SD-P71S lacks the USB port found on the SD-P91S, which leaves CD and DVD as the only way of playing back multimedia files, but the rest of the sockets are exactly the same. There are two headphone ports, AV input and output minijack sockets (for which you’ll need the supplied adapter cable) and a 3.5mm coaxial digital audio output, which feeds Dolby Digital and DTS bitstreams to surround sound receivers.


The unit supports DivX movies (version 6), MP3 audio and JPEG photos from recordable CDs and DVDs, plus it’ll spin DVD-RW, DVD-R, DVD+RW and DVD+R discs created on DVD recorders. When fully charged the battery lasts for three hours, which isn’t as good as the five hours offered by the SD-P91S but should still allow you to squeeze in a film or two.


As expected for a portable player, the features are few in number, but there are several handy functions. The picture button on the remote (found under the screen on the 91S) brings up an onscreen menu that allows you to flip the screen upside down, adjust the brightness and colour levels or flick between 16:9 and 4:3 modes. Elsewhere is the less-exciting-than-it-sounds Enhanced Audio Mode, which adds a ‘3D surround’ effect to the sound when listening through stereo speakers, and a zoom mode that enlarges the image in three steps.

In the box is a power adapter for the car cigarette outlet, a carry case, a pair of headphones and a credit card style remote control, which sports a bank of small, fiddly buttons at the bottom but also provides large, well-placed menu controls in the centre. Some functions require you to hold down the shift key, which is never ideal on a remote, especially with buttons this small. 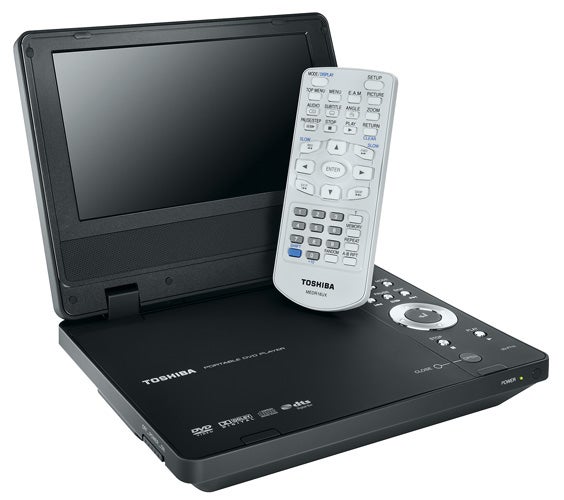 Hit the Setup button at the top, and it brings up a moderately attractive menu that lets you tinker with the limited array of options, including language selection, parental lock settings, audio output options and the registration code for on-demand DivX content. It’s a little bit sluggish to move through the settings but it’s generally frustration-free. During playback you can also call up a display showing the key details about the current content, including the video bitrate.


The SD-P71S delivers a bright, vivid and clean-looking DVD picture, particularly with the ”Spider-Man 2” DVD in the tray. The main reason for our positive first impressions is the player’s brilliant colour reproduction, which cleverly avoids looking garish or too overpowering. Tobey Maguire and Kirsten Dunst’s facial tones, for instance, are sensitively handled – the player gets their pinkish hues spot on, and effortlessly picks out gentle shading. But when needed, the Toshiba can deliver bold colours with warmth and vibrancy – the bright yellow flames of Doc Ock’s energy generator look dazzling, and of course Spider-Man’s red costume looks utterly radiant. 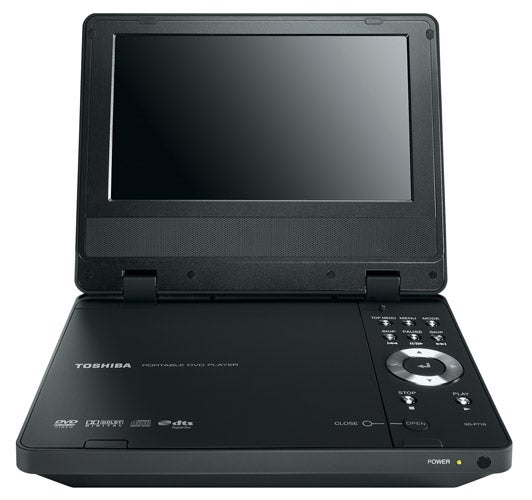 The 7in screen also does a fairly competent job at handling detail, making the most of the limited pixels at its disposal. Shots of the city streets look steady and focused, and surprisingly you can just about make out details on the background scenery like windows and lettering. The mechanical detail on Doc Ock’s robo-arms is also well-handled. But like the other portables we’ve reviewed recently, the SD-P71S has to remove pixels to make the image fit and the visible pixel structure results in stepping effects on diagonal lines and an undeniable softness in places. But on the whole the bright, well-contrasted images are perfectly fine for casual viewing in the back of the car.


Sound-wise you’re well advised to plug in a pair of headphones as the built-in speaker’s aren’t great at conveying anything other than treble, although it delivers dialogue without a hint of sibilance, which is an achievement of sorts. CDs and MP3 music also sounds terrific through decent cans.


Although this player would benefit from a higher-resolution screen, the SD-P71S makes the most of what it’s got with a very pleasing picture performance (particularly when it comes to colour reproduction and brightness), which is ideal for viewing on the move. But its most appealing aspect is its sturdy built quality and rubberised finish, which is much better than we expected for the money. DivX and MP3 playback is a nice bonus – if you can put up with playing them from discs, that is.