We’ve seen plenty of hybrid devices since the arrival of Microsoft’s touch-friendly Windows 8 OS, and Toshiba’s Satellite W30T is the latest machine that’s designed to work well as both a laptop and a tablet.

Toshiba reckons its latest machine can cover both ends of the spectrum thanks to one simple solution: the components are crammed behind the 13.3in IPS panel, and the screen unit can be detached from the keyboard entirely – so it instantly becomes a Windows 8.1 tablet.

Toshiba has used this type of design before on its £750 Portégé Z10T-A-106, but rival systems use a multitude of imaginative mechanisms. The Microsoft Surface 2 has its soft-touch keyboard case, and the £1,200 Sony VAIO Duo 13 has a hinge that allows the screen to slide up and reveal a keyboard. 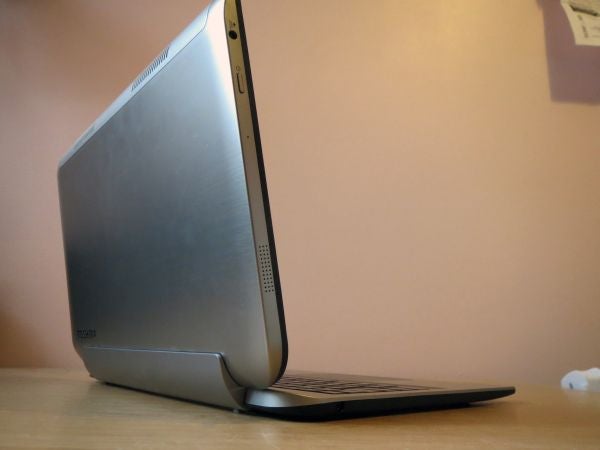 The Toshiba’s £630 price puts it at the budget end of the hybrid market, so we’re not surprised that Toshiba has played it safe with the Satellite’s looks. The lid is clad in familiar brushed aluminium, and the keyboard area is coated with silver-coloured plastic. The base is plain black plastic, and the screen is surrounded by a glossy black bezel.

The aesthetics don’t stand out, and the top of the system is marred by the screen dock – while this mechanism is designed to add versatility, it’s not as slim and unobtrusive as the case-clad Surface or the sliding Sony. There are no smart design touches or extravagant extras elsewhere and, while this isn’t a bad-looking laptop, the Satellite is undeniably safe and unimaginative.

Build quality is mixed. The screen itself is rock-solid, and a strong rear that exhibits hardly any flex, and the screen itself felt just as sturdy. The base doesn’t meet this high standard; its corners are too flimsy for our liking, and the centre feels weaker – we could push from underneath and easily distort the keyboard.

ROUND-UP: 10 Best Laptops You Can Buy 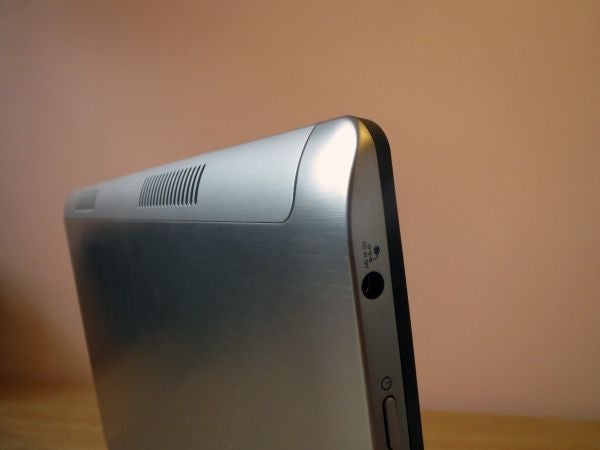 We like the screen’s strength, but it’s got a downside – weight. It tips the scales at a little over 1kg, and it’s 14mm from front to back. That means the Toshiba’s tablet portion is bulkier than the 900g, 13.5mm Surface 2, and around twice as large as some conventional tablets. The 13.3-inch diagonal doesn’t help, either; when the Toshiba is used as a tablet, its sheer size is uncomfortable for long periods.

The bottom section weighs about 1kg, which puts the total weight of this machine at 2.1kg, and the whole machine is 24.6m thick. That’s much bigger than the 1.3kg, 22mm Sony, and it’s also heavier than any Ultrabook. It’s unusual for a laptop’s screen to be as heavy as its base, and it makes this machine feel top-heavy, and it’s too easy to make it tip backwards when we prodded the screen – much like the older Portégé.

The port selection includes single USB 3 and USB 2 ports, which is the same as the Sony, and there’s also a micro-USB connection, microSD slot and micro-HDMI port. It’s the same offering as the Sony, and not as many connections as a fully-fledged laptop will offer, although the VAIO does pull ahead in one department – it’s got a stylus, too.

Dual-band 802.11n wireless gets connectivity off on the right foot, there’s Bluetooth 4.0, and this machine supports Intel Wireless Display and Miracast. There’s no room for a Gigabit Ethernet port, though, and no adapter is included. 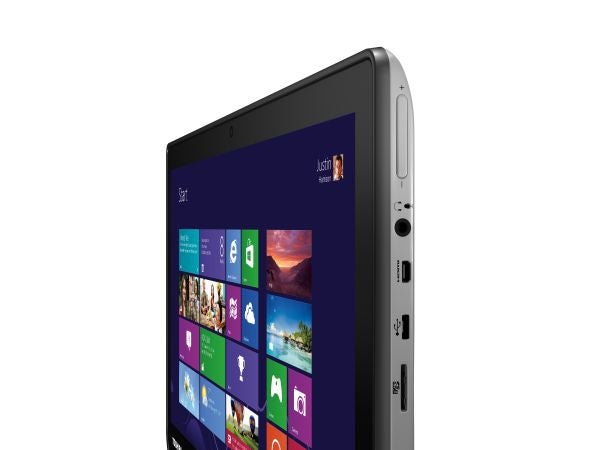 The Toshiba’s IPS panel suggests high image quality, and it delivered good viewing angles – we tilted the screen back and forward without losing too much visual fidelity. The touch technology works well thanks to accurate responses and a lack of a grainy, visible touchscreen layer.

When we tested using an Xrite i1 Display Pro, though, the Toshiba delivered mixed results. The maximum brightness level of 266 nits is a little low – while it’s fine for daily use, it left the panel looking pallid, and it can’t compete with the eye-searing 442 nit brightness of the Surface Pro 2. The Toshiba’s black level of 0.21 nits is good, and it combines with the maximum brightness to deliver a 771:1 contrast ratio – a reasonable figure that ensures a good range of colours throughout. The Sony, though, trounced the Toshiba with a 1,122:1 contrast ratio.

The Toshiba’s mid-range status becomes obvious elsewhere. The 1,366 x 768 native resolution can’t compete with the Full HD screens on the Surface Pro 2 or the Sony, which means the screen is much less sharp than its rivals, and the 4.7 DeltaE is average. The screen only handles 60.7% of the sRGB colour gamut, too, which is low: while the Satellite’s panel proved capable with green, yellow and blue shades, it struggled with reds, pinks and purples. 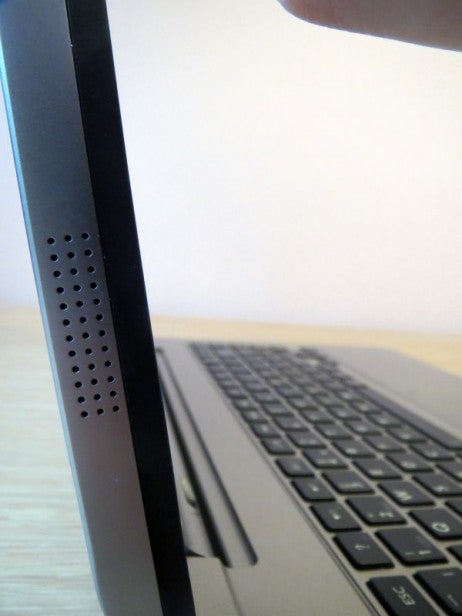 Toshiba’s machine might have emerged from the firm’s work-focussed Satellite range, but the lack of colour coverage, the low resolution and the mediocre brightness level means this panel isn’t cut out for high-end productivity software.

The speakers are driven by a punchy mid-range, but they’re less impressive elsewhere. The top-end is too muddy, the bass is too quiet, and there’s enough volume for those using the Toshiba as a tablet – but not enough to fill a room.

The two speakers are on the left- and right-hand edges, which is fine in laptop mode – but when the Toshiba is held in its landscape orientation, your hands will block them off and ruin the sound.