It’s not generally good form to start a review with a complaint, but if an example of the excesses of glossy black plastic was ever needed then Toshiba’s current range of consumer notebooks would be the perfect fit. We thought Samsung was keen on the stuff, but Toshiba just takes the biscuit. A glossy lid we can deal with, likewise a glossy screen, and we can even tolerate glossy interiors, such as those found on the Samsung Q310, within reason, but glossy keyboards? It’s just a step too far. 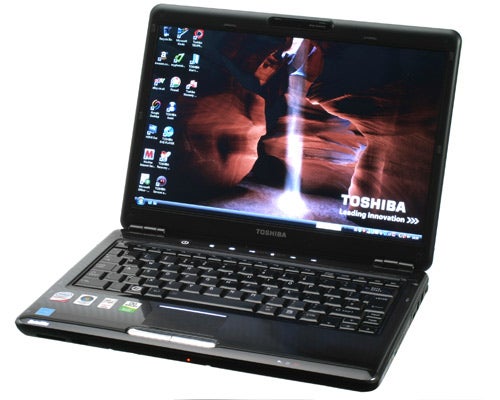 Happily, while we have some reservations with Toshiba’s choice of materials, the U400-189 highlights that you shouldn’t judge a book by its cover alone. A 13.3in machine, the U400 is the portable all-rounder of Toshiba’s range, matching Core 2 Duo processors and decent feature sets with a 2kg chassis that can plausibly be carried around without breaking your back. In this sense, it’s similar to the Samsung Q310, Dell XPS M1330, Dell Studio XPS 13 and the outstanding Sony VAIO Z Series, though unlike the latter three, the U400 costs a fairly affordable £670 online, so it’s really competing against the Samsung Q310 and notionally the HP Pavilion dv2 as well. Hell, some people might even consider a netbook, like the Samsung NC10 or Toshiba’s upcoming NB200 as a comparison, though it’s not a view we’d encourage.


Despite the above complaints, for the large part the U400 is a nicely designed machine. Its glossy black (or navy blue depending on the light) lid is a definite improvement upon the pinstripe effort found on the Satellite A300-177 last year, while we’ve come to rather like the black and silver striped interior – grease and fingerprints accepted.

Particularly neat, though, is the backlighting dotted around the touchpad, the ‘Satellite’ logo in the bottom left, the status icons to the right and the touch-sensitive media keys above the keyboard. These are all smart additions, as are the labels denoting the location of ports at the sides and the speaker grills, which are rather less obtrusive than those found on Toshiba’s larger notebooks, like the Satellite A350-11N.


It’s just that glossy keyboard that’s the sticking point. It’s not just that it’s glossy, though: it gleams. It constantly reflects light from above, which can prove very distracting, while the obvious issue of grease, fingerprints and dust can’t be ignored. Indeed, when you look at it, you rather imagine it’s been dipped in a large vat of lip-gloss and that, like a Hollywood star whose face has been subject to a little too much ‘enhancing’, were it to face direct sunlight, it might just melt away. This isn’t to say it would, it almost certainly wouldn’t, but that’s the impression it gives. 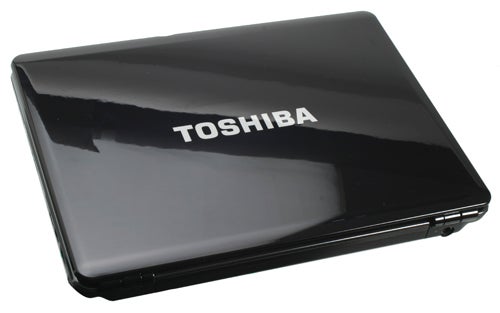 Directly underneath the keyboard, however, the U400-189 hides away a very comprehensive specification. This includes a nippy, rather than rapid, Intel Core 2 Duo T6400 processor, which runs at 2.0GHz with an 800MHz FSB and 2MB L2 Cache. It’s one of the older variants of the mobile Core 2 Duo, with a 35W TDP rather than 25W, but it more than holds its own. This is matched with a plentiful 4GB DDR2 RAM (though only 3.5GB can be addressed by the 32-bit OS) and a 320GB hard drive, so you’re not left wanting for system memory or storage capacity.

Beyond the basics the U400 also continues to impress. Unlike the Samsung R522 we looked at recently, it boasts both Draft-N Wi-Fi and Bluetooth 2.0 and though Ethernet is only of the 10/100 variety (i.e. not the fastest), this shouldn’t pose a problem for the majority of home users. After all, when you’re around the home with a laptop, it’s all about being wireless, isn’t it?

Connectivity is also very good. You get three USB ports, one of which moonlights as an eSATA port. They’re all powered, too, so you can plug your mobile phones and other USB devices to charge them, without having to turn your notebook on. In addition, you’ll find HDMI and VGA outputs, a 54mm ExpressCard slot, a mini-Firewire port, Ethernet and even a modem port – something we see less and less of these days. Finally, on the front, there’s a memory card reader, a wheel-style volume control and a hardware switch for the wireless radios.

Indeed the only potential banana skin in hardware terms is the Intel integrated graphics, but gaming is hardly a big priority for a machine such as this, while battery life is – something integrated graphics most certainly enhances. Moreover, at this price point, it’s pretty much impossible to find a notebook of this size that can offer anything perceptibly better, rendering any complaints effectively moot.


So let’s return to more tangible issues, such as the keyboard and our continued love-hate relationship with it. Indeed, it really is a Jekyll & Hyde affair. On the plus side, it sports an excellent layout; among the best for a notebook of its size. Everything is the right size and where you’d expect it, with a smart dividing line between the top line of numeric keys and the F1 to F12 keys above. Likewise, the cursor keys are intelligently withdrawn, avoiding any potential interference, while the addition of Page Up and Down keys just below the Return key is a welcome one. 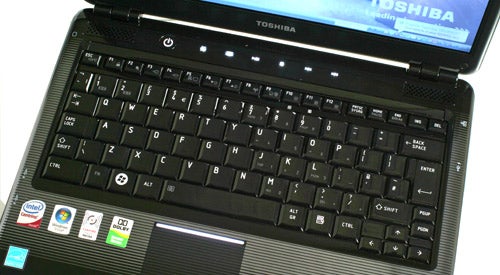 As for the keys themselves, they’re pleasant to type on but don’t quite match the quality of some notebooks – go find a ThinkPad to see what we mean. Unfortunately, this otherwise positive experience is let down by an alarming amount of flex through the middle of the keyboard. Some people are more sensitive to this than others, so all is not lost, but the U400 would be much better without this particular issue.


Happily, no meaningful complaint can be made of the touchpad. It’s well proportioned and has a textured surface to separate it from the glossy interior around it. Likewise, the two faux-chrome buttons have a firm and positive action that makes them nice to use.

Since the U400 sports a 13.3in screen a more traditional 1,280 x 800 resolution is used rather than a 16:9 ratio one with fewer vertical pixels. Colour fidelity and brightness are about par for a notebook of this size and price; decent, but not outstanding. Likewise, though the viewing angles aren’t tremendous, neither are they bad enough to warrant any real complaint.

It’s a similar tale when it comes to audio, though the U400 does have a few more things to recommend it here. While the integrated speakers are reasonable for a notebook like this, proving ample for watching video clips and casual music listening, the U400 ratchets things up by including support for Dolby Sound Room. This comprises Dolby Headphone (virtual surround for headphones), Sound Space Expander (widens the soundscape) and Natural Bass (extends the bass response). It’s a useful selection of technologies, particularly Headphone, which is great when watching films and TV.


In the benchmarks we’ve compared the U400 against the Samsung Q310, another 13.3in machine that costs around the same and has a very similar feature set, in addition to the HP Pavilion dv2-1030ea for those that are just after something portable and care less about raw performance. In broad terms the Samsung, which uses a faster Centrino 2 spec processor, is around 20 per cent faster than the U400. This may sound like a lot and clearly there is a performance difference there, but in general the U400 puts in a decent effort. As you might expect the HP follows much further behind due to its single-core processor.

It’s in battery life where the difference between the Samsung and the Toshiba is more marked. Though the U400’s return of three hours in the multi-tasking Productivity test is good, the Q310 can go for over four hours between charges. This trend is continued in all the tests, so while the U400 delivers good battery life, the Q310 is in a different league in this respect.


This particular fact will swing most people in the direction of the Q310, though the Toshiba does have a few things that the Samsung doesn’t. These include superior audio and Dolby Sound Room support, powered USB ports, an eSATA port, as well as dedicated playback and volume controls. If you need any of them then the U400 is a very good option but, if you’ll excuse the car tech analogy, the Toshiba is the slower car with a few mod-cons, while the Samsung requires less refueling and is faster. 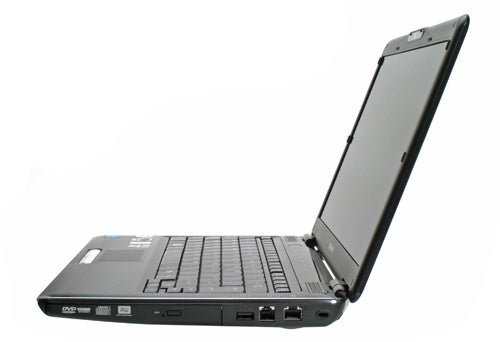 
As a 13.3in machine the Toshiba Satellite U400-189 is a decent effort – as far as features go it can’t be reasonably faulted. However, Samsung’s current Q310 offers a similar feature set at more or less identical prices, but also better performance and battery life that ultimately tips things in its favour.

(centre)
With its 2.0GHz Core 2 Duo and 4GB RAM, the U400-189 should be fine for the majority of computing tasks, but the Samsung Q310 is appreciably faster in many areas.
(/centre)

(centre)
Three hours is a decent amount of multi-tasking use, though the Samsung manages over four.
(/centre)

(centre)
The gap narrows in the DVD test and if you reduce the display brightness, watching a film on battery should pose no problems.
(/centre)