We’ve seen a few very decent 13.3in notebooks this year. A form factor made popular by the actually rather hefty Apple MacBook, the Dell XPS M1330 and Sony SZ6 are also very good examples in this sector, with both providing excellent performance in a comparatively portable chassis. However, if you’ve been tempted by these but find they sit a little outside your budget, the Toshiba Satellite U300 series may be worth a look. 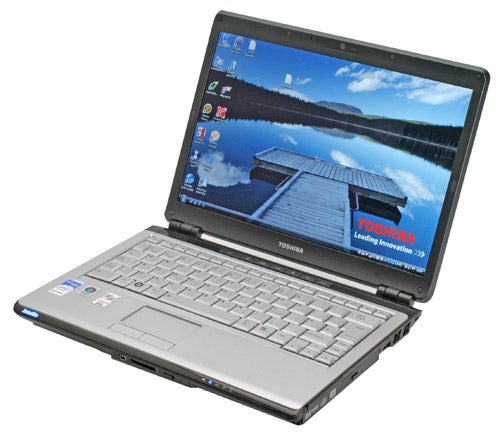 Our sample model is the U300-134, which generally retails for just under £700 but is currently available for the staggeringly low price of £650 inc. VAT. For this you get a system powered by an Intel Core 2 Duo T7250, which runs at a healthy 2.0GHz with an 800MHz front side bus and 2MB L2 Cache. This is paired with 2GBs worth of 667MHz DRR2 RAM and a 160GB 5400rpm SATA HDD, with graphics supplied by the integrated Intel GMA X3100 chipset. Fine, none of this is especially noteworthy in and of itself, but it is perfectly acceptable for the price point and you could certainly do worse.


Indeed, this sums up the basic package pretty well. There’s nothing outstanding about it but there’s nothing intrinsically bad either: it’s acceptable, ordinary and mostly unremarkable. You get 802.11a/b/g Wi-Fi as well as Bluetooth, with the obligatory 10/100 Ethernet and a 56k Modem present too. An 8x Super Multi DVD+/-RW drive rounds off the box ticking, as does the 13.3in, 1,280 x 800 display with a 1.3 Megapixel camera encased in the bezel. Though it’s not especially colourful or bright, it has a good and even backlight and is sharp and pleasant to use while performing everyday tasks. It’s also perfectly decent for watching video content on, though the viewing angles aren’t a strong point.

This theme is continued when it comes to connectivity. Three USB ports is an improvement over the Dell XPS M1330, but in all other departments it’s entirely inferior, while remaining perfectly acceptable – there’s that word again! For video you get a single D-Sub, with no such niceties as HDMI or S-Video. This is joined on the left edge by two of those USB ports, headphone and microphone jacks and a handy volume control dial.


Meanwhile, on the front there’s a FireWire port and memory card reader, with support for SD, Memory Stick, Memory Stick Pro, MMC and xD card formats. Finally, on the right edge, there’s a 54mm ExpressCard slot, the other USB port, an Ethernet port and a modem port, all of which are arranged around the optical drive. Also worth noting are the shortcut buttons above the keyboard, providing quick access to your browser and media player as well as playback controls.

Thus far then, the Satellite U300-134 has put in a good account of itself. It has merely solid features and components but for the price, all is well, with the machine lacking nothing most people actually need out of portable notebook. Happily, it’s also a predominantly well designed and attractive looking machine too.

On the outside it shares the familiar classy looking glossy navy blue finish that’s common across Toshiba’s Satellite range, though the big bold ‘TOSHIBA’ lettering is a little over the top. Still, it has its charm and doesn’t look anything like as cheap as it actually is. Opening up the notebook provides a similarly positive impression, with an all silver keyboard framed by glossy black panels above and below. 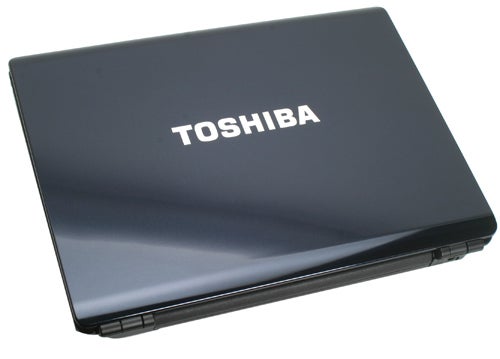 There are some nice touches dotted around too, particularly the blue backlit ‘Satellite’ lettering and status lights on the front. Another plus point is the keyboard layout, which is nicely proportioned and free of any of the common irritations. Indeed, it’s as close to a full-size keyboard (sans a number pad) you’re likely to get on a notebook of this size, with a proper sized Return key and slightly withdrawn Cursor keys.


Unfortunately, the decent layout is let down somewhat by the feel of the keyboard. It’s not awful by any means, but they’re definitely some issues. When typing it’s immediately obvious that the key travel isn’t quite as deep as is ideal, lending the keyboard a slightly spongy and unresponsive feel. This is compounded by a significant amount of flexing, a problem also encountered in the sadly disappointing but nonetheless ingenious Toshiba Portégé R500.

This problem is also found on another part of the notebook, specifically the right edge of the notebook that houses the optical drive and ExpressCard slot. Unlike the M1330, where the drive is neatly integrated into the chassis, in the U300 it seems almost tacked on. This, combined with the ExpressCard slot being housed in the same area, means this section of the notebook is quite hollow, allowing for some flex when put under pressure.


This is obviously a sign of how Toshiba has saved money on construction, since the design means the optical drive can simply be slotted into the space provided. However, this is the only overt piece of cheap construction on show, with the U300 otherwise feeling fairly sturdy. Pressing against the back the screen reveals that the pressure is distributed evenly while, with the exception of the flex on the right side, the whole machine feels compact and tightly put together. 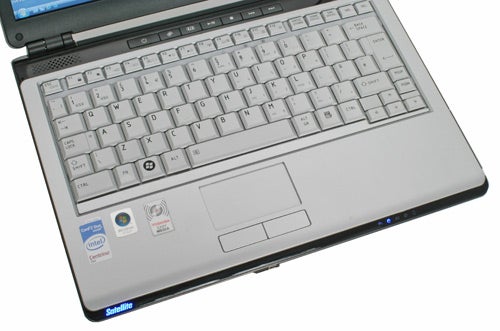 Indeed, so confident is Toshiba about the reliability of its notebooks, that if you purchase one if its notebooks before the 24th of December and it develops a fault in the period of your warranty, it’ll not only replace the notebook but send you cheque for the purchase price of the notebook. Oh, and before you ask, chucking your notebook down the stairs doesn’t count!

As is typical with Toshiba’s consumer notebooks, this machine comes loaded with a fair amount of software – some of it useful and some just simply bloatware that could do with being removed. Naturally enough Vista Home Premium is the OS of choice, while Norton Internet Security is included with 90 days of updates available. Also included are Microsoft Works 8.5 and an Office 2007 trial, with lots of Toshiba’s own and mostly decent utilities.


Unfortunately, there are a few bad apples mixed in with this lot too. Toshiba Flash Cards is a perfect example. Ostensibly it’s a visual interface for the Fn keys, which is actually fairly useful when adjusting display brightness and so forth. However, it will at times use up as much as 40MB of system memory, which for a relatively minor piece of functionality seems excessive. Adding to the bloat is the inclusion of “added value” rubbish such as Desktop SMS, while both Toshiba Flash Cards and the WebCam Manager feature obtrusive hidden slide out trays. 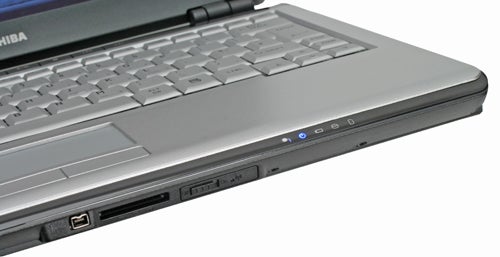 However, provided you disable some of this bloat, performance is more than adequate. In PCMark 05 it compares favourably to the Dell XPS M1330, only losing out due its integrated graphics – which is hardly a great issue anyway. Likewise, our in-house tests showed very comparable results, demonstrating that the 2.0GHz T7250 with 2MB L2 Cache is nigh on identical in performance to the 2.0GHz T7300 that has 4MB L2 Cache. Unfortunately, PCMark Vantage refused to run on this machine, but the results garnered here tell you all you really need to know.


And, though the integrated graphics means you gain next to nothing in gaming performance, it does have a beneficial effect on battery performance. With the standard six-cell battery, the U300-134 managed a healthy three hours and 23 minutes in the Reader test under the Balanced profile and three hours and 28 minutes in Power Saver Mode. 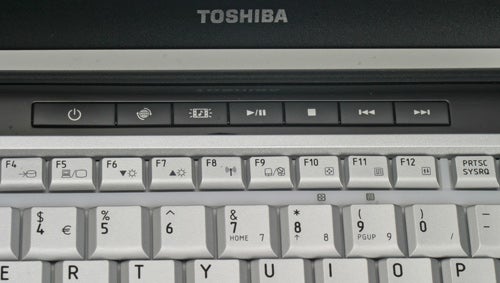 DVD Playback results were also encouraging, with a result of two hours and five minutes under worst case conditions, where the brightness is set to its maximum. This is long enough for a medium length film, while turning brightness down just a small amount should improve things further. In real world use this should translate to in excess of three hours of battery life, depending on usage and settings.


This says much about the qualities of the Satellite U300 series and this model, the U300-134. Flashy it isn’t, but it ticks all the boxes required of a portable notebook at a price that isn’t prohibitive. Thus, at £650, one can forgive some of the issues such as the keyboard flex because, otherwise, it’s a great value alternative to more expensive and exotic variety. Moreover, if you have a little more money to play with you could go for the U300-13V, which offers a 2.4GHz T7700 and 802.11n Wi-Fi for less than £850. 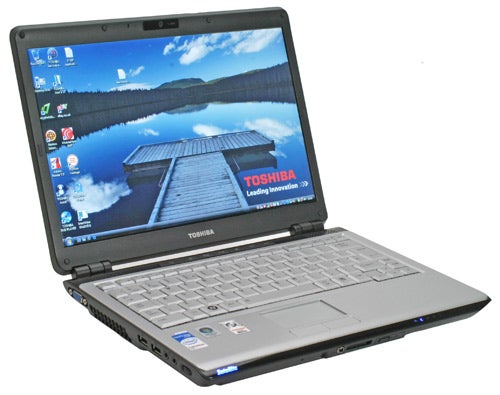 
Though there are some minor issues, at the price the Toshiba U300-134 is a real bargain. It offers very competent mobile performance in an attractive chassis, which weighs just 2kg. As such, if you want portability but don’t want to pay the premiums demanded by the likes of Dell and Sony, then this is your next best option.