We’re big fans of ultra-portable notebooks here at TrustedReviews – oodles of power is all well and good but a notebook needs to be portable and we’re more than happy to sacrifice a little power for portability. Unfortunately most of the best ultra-portables are very expensive, making them more of a luxury item than the commodity we wish they were.


Thankfully, Toshiba has seen fit to do something about this with its Satellite range, which aims to provide affordable solutions for all environments. Today we have the U200-161 which is available for a reasonable £600 and, though the 1.87kg weight isn’t quite in the ultra-portable league, it’s still on a par with TR favourite, the Samsung Q35 Red Core 2. 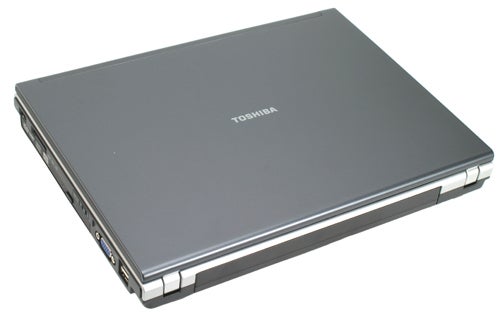 
At this price it’s difficult to have too many quibbles with such a specification, though the U200-161 does lack a couple of potentially useful features such as Bluetooth and an ExpressCard slot. It does however have a PC Card slot, which is great if you have, say, a 3G data card, but the lack of an ExpressCard slot could leave you somewhat restricted in the future. 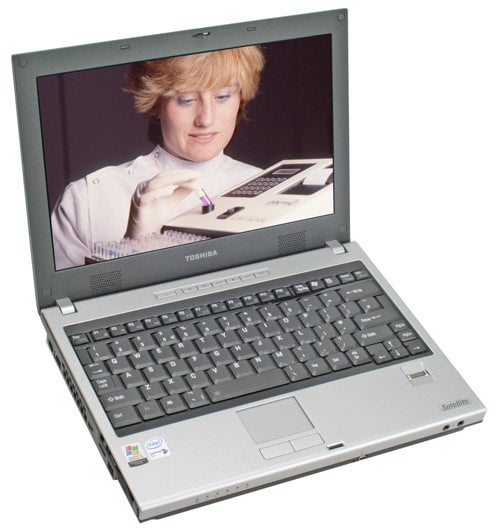 Speaking of the future, the U200-161 comes with a single piece of 512MB RAM, leaving another open to upgrade to the 1GB you’ll certainly need if you plan on installing Microsoft’s shiny, clock adorned new operating system, Vista.


On the flip side it does feature a few nice features for mobile professionals, with a Fingerprint Reader for added security, shock-resistant HDD protection and an in-built microphone for VOIP calls. These are some nice additions, adding peace of mind for your data and ease of use for those wishing to save some money using increasingly popular VOIP services. 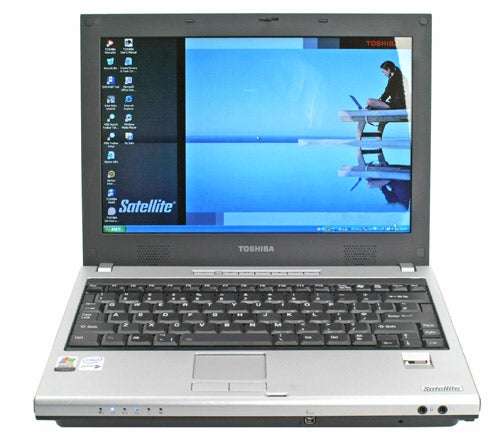 Aesthetically the U200-161 defies easy qualification. At some angles it looks really rather sleek and understated, but from others – especially when looking at the touchpad area below the keyboard – it seems rather generic. Inoffensive is the over used term that probably best applies, and at this price one shouldn’t expect a design marvel. At the very least the build quality is up to Toshiba’s generally excellent standards, so there are no concerns in that department.

Connections wise the U200-161 packs plenty of options into a relatively small 225 x 299 x 34.8mm chassis. On the left you’ll find the DC in, Ethernet port, security lock point, a USB 2.0 port, modem socket and the PC Card slot. The front houses a four-pin FireWire port, along with microphone and headphone jacks.


On the right are two USB 2.0 ports, one above the other, D-Sub, wireless on/off switch, 6-in-1 card reader and finally a neat volume wheel which is spring loaded and can be pressed inward to mute the audio output. Finally, the optical drive sits tidily below the card reader.

Though the connections are well laid out the same can’t be said of the keyboard, which has a rather unusual arrangement. One always has to make some concessions on notebook keyboards, especially on ultra-portables, but some of this particular layout defies logic. 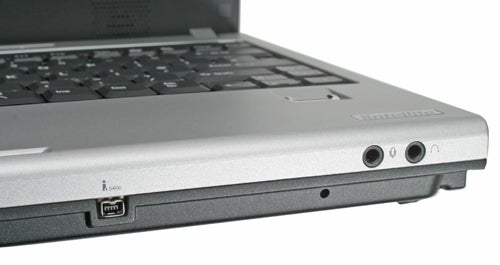 The Page Up/Down keys are situated awkwardly on the far right, next to the Shift key and below a smaller American style Enter key. This, despite there being blank spaces either side of the cursor keys where they would have been far more at home.


There’s also a blank space above the Enter key that could have been used to extend it over two rows, mirroring what you’ll find on normal desktop keyboards. One redeeming feature of the layout, however, is the smaller Caps Lock key which is safely tucked away where it can’t be activated by accident.

It’s difficult to understand why Toshiba has decided to do things this way, but some extra thought and attention would be welcome. It’s all the more disappointing because, apart from the curious layout, the keyboard is actually very good. Each key has a crisp, even feel to it and I found typing on it very easy indeed – when I wasn’t searching for oddly arranged keys that is.

Putting the idiosyncrasies of the keyboard aside for one moment, the U200-161 has a glossy finished 12.1in widescreen display with a 1,280 x 800 native resolution. For the price this display is really very good, and for a glossy display the viewing angles are surprisingly wide while even in an office environment it wasn’t overly reflective.


The blacks and colours it produces are typically excellent, and it dealt with the high contrast final scenes of Apocalypse Now very well indeed. The only slight annoyance – and it is only slight – is some backlight bleeding from the bottom of the screen which is especially noticeable when watching a DVD in a 2.35:1 letterbox format. 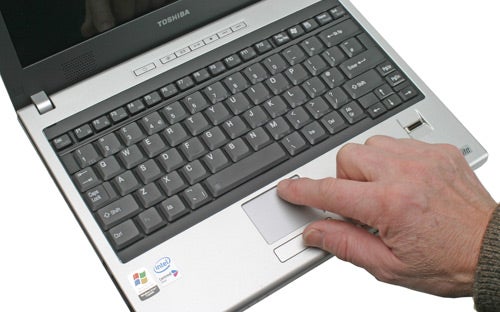 For our testing we’ve compared the U200-161 to the larger, but similarly priced and specified, Lenovo 3000 N100, and the more expensive Q35 Red Core 2 Duo. Overall the U200-161 performed creditably, lagging only slightly behind the Lenovo that benefited from twice the amount of RAM and an nVidia graphics chip.


The U200-161 did, however, excel itself in the MobileMark battery tests, coming comfortably in between the larger Lenovo and the more expensive Samsung Q35. Normal battery performance was excellent, with the Toshiba lasting 206 minutes, almost four hours, and it received the same performance rating as the Q35.

The Toshiba power management software should also be singled out for special attention, providing a plethora of options to maximise performance depending upon usage.


Having had doubts at first, the Toshiba U200-161 has certainly proved to be more than capable. Performance is solid, and the excellent battery life and a high quality display help make it a good all rounder for home and business use.


It only misses out on a Recommended award due to annoyances such as the lack of Bluetooth, the unusual keyboard layout and the minor backlight bleeding. If you can put up with these, and the price should certainly help alleviate the pain, then the U200-161 is great little buy.