The keyboard on the S50t feels identical to the P50t, and that’s no bad thing at all. The keys are well spaced and responsive, and it’s very easy to touch-type as fast as we usually manage on a desktop keyboard. The 15.6-inch base is wide enough to house a full numpad to the right of the letters, and the function keys are all present and accounted for as well. 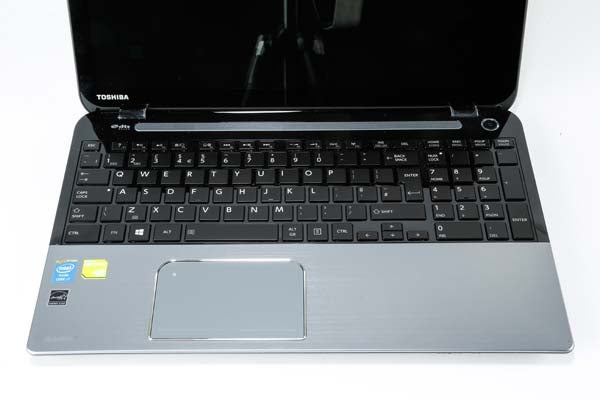 Once again, our only minor bug-bear is the stubby space bar that Toshiba has included, which leads to (very occasional) missed spaces, but its nothing you won’t get used to after a couple of hour’s usage.

Like the keyboard, the touchpad is pretty much identical to the one installed in the P50t. It’s not bad, but can misread gestures with irritating regularity, and you sometimes find yourself highlighting, rather than scrolling for example. It’s a good size, though, and left and right click areas are clearly defined. 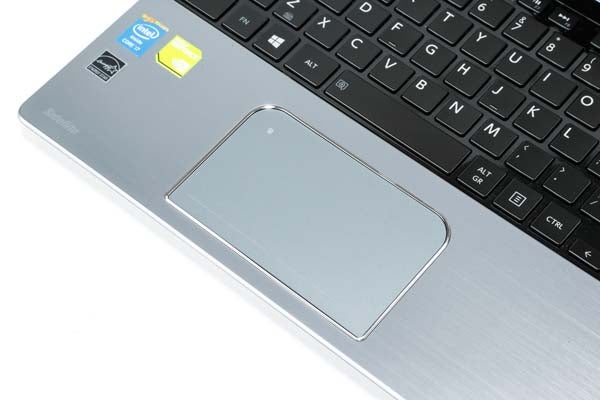 Like other Toshiba laptops we’ve looked at, the touchpad is offset to the left, so it appears in the centre of the letter keys, rather than the whole board including the numberpad. Once you get used to this, it’s fine, but initially you may find yourself accidentally right clicking when you mean to left click.

The sound on the P50t, provided by Harmon Kardon, was some of the best we’d heard in a laptop, and this is clearly one of the cost saving points on the S50t. It’s not bad, but nowhere near as good at the P50t’s, which provided impressive bass and clear channels. Here it’s a lot less distinct with its channels, and predictably a lot more tinny. 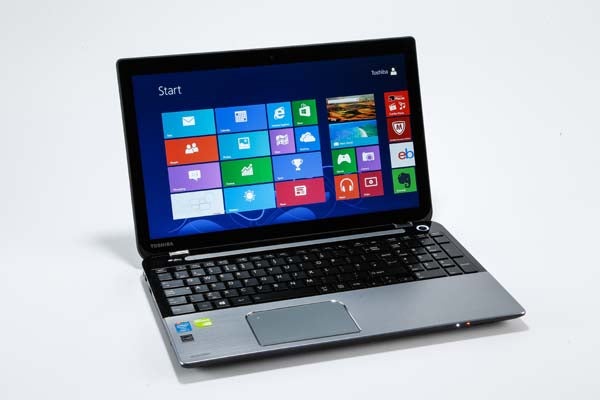 One area the S50t hasn’t saved money though is on optical drive – we’ve still got a DVD drive built into the laptop, despite the trend to ditch them of late. We don’t use them often, but it’s still pretty handy to install older software, or to watch a DVD should Netflix let you down.

The Toshiba Satellite S50t-A-118 is a hard one to sum up – it keeps most the positives of the more expensive P50t, while keeping the annoyances and throwing in a couple more. The performance is pretty much identical, but the screen is even worse, the speakers are weaker and the battery life is the worst we’ve seen.

If these things aren’t an issue for you, then you can’t argue with the S50t’s value. There’s much that we’d improve in both Toshiba Satellite laptops if we could, but the reductions here don’t feel like they add up to £200, which makes it something of a bargain. You can’t argue with a 20% saving when performance is near identical.

A strong performing laptop with similar performance to peers £200 more expensive, but not without its problems: chiefly the poor screen and its abysmal battery life.