It’s easy enough to find a light, well-built and premium-feeling 13.3in laptop that will last a while away from a socket if you’re willing to spend over a grand. From the Lenovo ThinkPad X1 to the imminent Sandy Bridge refresh of the Apple MacBook Air, there’s plenty of choice. However, if your budget is limited there are far fewer candidates. One of last year’s most interesting ones was the Toshiba Portege R700. Clad in a light metal shell and without compromising on features, only a few flaws held it back from an unreserved recommendation. Now we’re looking at an ultraportable that has the chance to fix these niggles and become one of our favourite choices in its class, the Toshiba Satellite R830-143.

The R830-143 sports a magnesium chassis, which makes it far lighter than rivals using aluminium. Combined with an understated yet attractive design, a matt screen, powerful Sandy Bridge Core i5 internals backed by 6GB of RAM and a 640GB hard drive plus generous connectivity – in a package that weighs a mere 1.47kg with integrated optical drive – it has all the elements in place to be a winner.

First off, let’s talk about design. From a distance, you might mistake it for a budget business machine, but once you get close the subtly brushed metal lid and keyboard surround show otherwise. Thankfully, Toshiba has resisted the temptation of glossy black here – which we have seen rather too much of on its consumer laptops throughout the years, including the recent Satellite p750. The only exception to the lack of shininess is the chrome finish on the R830’s touchpad buttons, and being as they’re the bits you’re likely to be touching most, regular maintenance may be required. However, this is a minor niggle and overall, we love the laptop’s understated ethos. 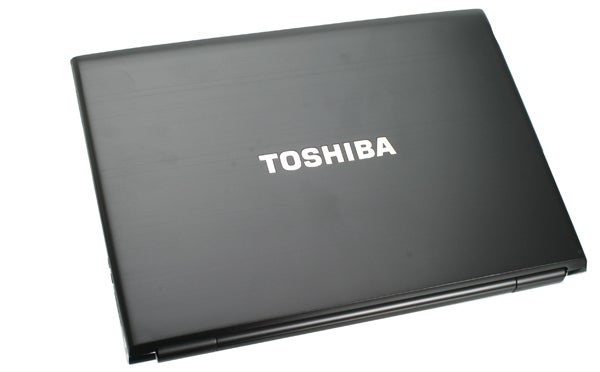 The R830 feels deceptively flimsy due to its lightweight construction, but actually build quality is flawless. Our only possible niggle is some mild flex in the keyboard. Apart from that, every aspect of this machine feels premium. It’s also worth keeping in mind that the magnesium lid isn’t quite as scratch-proof as aluminium ones tend to be, but with a little care this is not an issue. 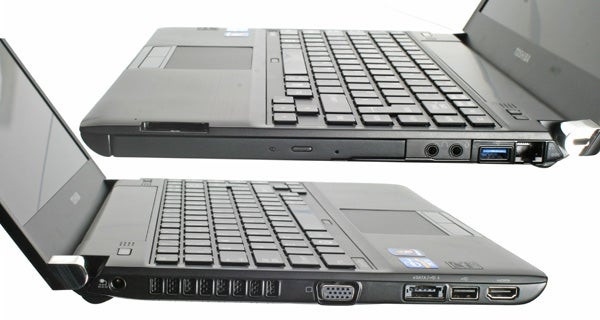 Connectivity is another area where the R830 has few rivals in its size/price class. VGA and HDMI are around for video, 3.5mm headphone and microphone jacks deal with audio, while data is taken care of by USB 3.0, USB 2.0 and a combined USB 2.0/eSATA port. The memory card reader accepts high-capacity SDXC cards, and the Ethernet port is of the Gigabit variety. However, what really stands out for an ultraportable this light is the presence of an optical drive – in this case a tray-loading DVD-rewriter. All connections are found around the sides, leaving the front and back free in keeping with its minimalist styling. Naturally, the wireless front is covered by both Wi-Fi N and Bluetooth 3.0 HS.

The R830’s isolation keyboard certainly looks the part and offers a selection of well-spaced keys. Unfortunately, it’s still one of the weaker areas of Toshiba’s premium ultraportable. Though feedback is good as far as it goes, it’s shallower than Barbie; simply too shallow for long-term, confident typing comfort. Mind you, it’s perfectly usable, but we would hesitate to recommend this as anyone’s primary word-processing machine.

Thankfully we have no complaints whatsoever regarding the multi-touch trackpad. We never found it to interfere with typing, yet there’s still a dedicated de-activation button between it and the keyboard in case you need or want it. The pad itself is large and responsive, and features a pleasant matt finish that makes for smooth movements. Its distinct shiny buttons, meanwhile, are well-placed and offer a reassuring click. 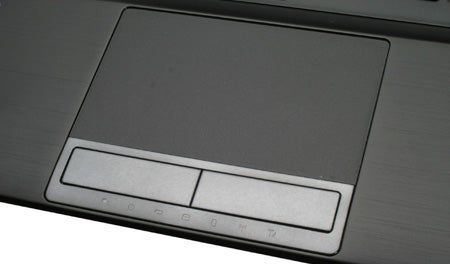 We’re used to superlative audio from Toshiba portables. Even its NB550 netbook managed better sound than many larger laptops. Unfortunately, as is apparent from their lack of harmon/kardan branding, on the R830 its speakers were not a priority. They lack volume, clarity and bass, so headphones or external models are definitely recommended for any kind of serious entertainment.

A mediocre screen was less of a surprise, as this doesn’t tend to be a forte of the Japanese company’s laptops in general. The 13.3in display found here offers a standard resolution of 1,366 x 768. Viewing angles were slightly below-par, and after the Samsung Series 9 900X3A showing us how good laptop TN panels can be, it’s even more difficult to put up with. Contrast also wasn’t the best, with the R830 unable to distinguish between the darkest greyshades, meaning you may miss out on fine details in gloomy movies or games. 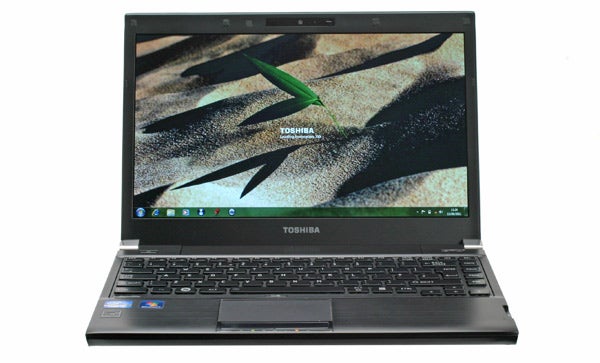 Colours also don’t come across quite as brightly as on a screen with a glossy finish, though to be honest this is a sacrifice we’re happy to make. Aside from loving its matt finish, we also like the screen’s backlighting, which was very even with only the merest hint of bleed in one of the corners. Excellent sharpness and a lack of artefacts, combined with the previous benefits, makes this a great display for work rather than play.

Above the screen resides a webcam which is not of the HD variety, a surprising omission when every other major manufacturer seems to be including 720p webcams on their high-end models.

Considering its reasonable price, one of the most impressive features of the R830 is its no-compromise internal specification, regardless of which model you go for. The R830-142 is the cheapest of the two, while our R830-143 review sample is the best available configuration.

The headline grabber here is Toshiba’s choice of Intel’s Core i5-2410M. This dual-core Sandy Bridge CPU runs at 2.3GHz (up to 2.9GHz Turbo-clocked) and supports hyper-threading for up to four virtual cores. It will handle anything you’d care to throw its way with consummate ease, especially as it’s backed by a generous 6GB of DDR3 RAM.

Storage is also spacious as you get a 640GB hard drive – though it’s of the 5,400rpm variety, rather than the faster 7,200rpm drives found in some rivals. The OS of choice here is a 64-bit version of Windows 7 Home Premium. 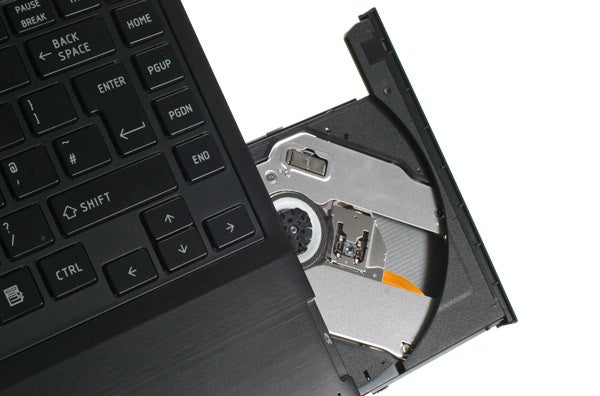 The only weak area of this Satellite is the R830-143’s lack
of dedicated graphics. While frugal on battery life and more than up to the
task of HD video decoding, Intel’s integrated 3000-series effort precludes gaming
at anything more than a casual level. As an indication, at medium detail on
720p, the processor’s graphics managed a smooth 52 frames per second in
TrackMania Nations Forever, but at maximum detail, the native screen resolution
and some antialiasing thrown in, things turned into a slide show, so even
relatively undemanding 3D titles may be a struggle if you want them at their
prettiest.

The upside of this is that the R830-143 does well in the battery stakes. Its six-cell, 66Wh unit powered the laptop through our low-intensity productivity test for six hours and 39 minutes before giving up the ghost, so with wireless radios turned on you’re still looking at six hours. Considering the power under the hood it’s quite impressive, though it’s a shame Toshiba doesn’t offer an SSD model as this would not only increase its day-to-day performance but should eke out even more battery life.

When it comes to value and whether we would recommend this laptop, the R830-143 is not a straightforward proposition. It’s light and offers good battery life. Its build quality and component-set are superb, and it doesn’t look or feel like a machine that’s available for a mere £730. On the other hand, the screen and keyboard do detract from its value, and it does get quite audible under load, though in normal use it only produces a slight hum. 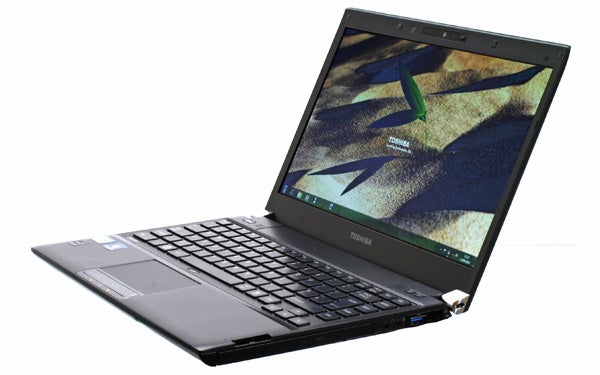 Still, in Toshiba’s favour is the fact that the R830 has very few direct competitors right now. Aside from little being able to match its lightness, HP’s similarly-sized machines still use last-generation processors and offer less advanced connectivity, while Dell’s 13.3in options in its consumer laptops are limited and relatively underpowered, with its closest candidate being the Vostro business line. Other alternatives, such as the Lenovo ThinkPad X1, tend to be significantly more expensive.

Considering its affordable price, the magnesium-clad Toshiba Satellite R830-143 will make a great travelling companion for productivity-oriented individuals looking for a stylish and light 13.3in laptop that doesn’t compromise on power or features. Only its mediocre screen and shallow keyboard preclude it from a wholehearted recommendation.