It’s been a long while since we’ve seen a Toshiba notebook in the TR labs, so we thought we’d correct this by getting in one of its latest range of Satellite Pro notebooks. Toshiba is still very much one of the larger players in notebooks and anyone that’s looking for a portable computer at a reasonable price is likely to have a Toshiba on their shortlist. 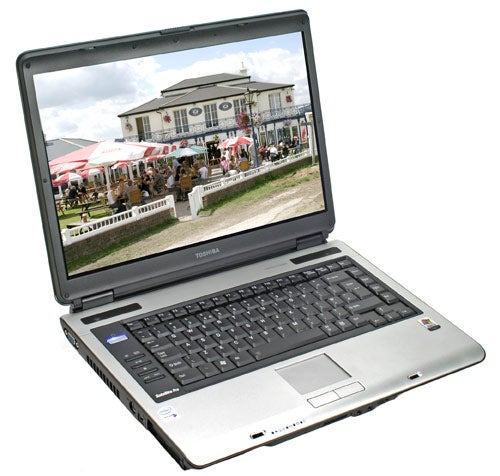 Two things struck me straight away when examining the A100 for the first time. Its size and finish clearly mark it out as a mid-priced notebook, but also that it had some interesting touches that mark it out from the generic-chassised notebook horde. The notebook is on the large side and the grey plastic which curves down at the front is not that inspiring. However, the black speaker grilles above the keyboard are thin and wide, which looks good and are helped by the presence of a Harman/Kardon logo next to them. They sound pretty good too, with lots of detail and no distortion, though there’s no bass to speak of.


Another neat visual touch is the strip under the F keys, which contains a small light which comes on when you press the Function key. It’s a small touch but it does have a useful function. 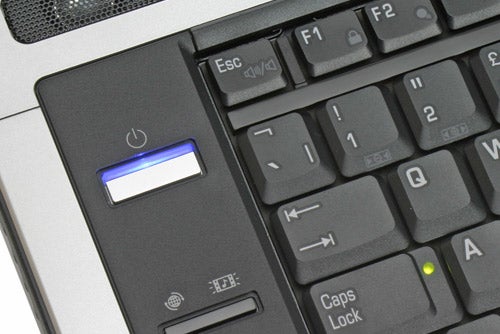 Also a bit special is the section to the left of the keyboard containing four buttons. The top button when pressed to the left launches your default web browser, while if you press it on the right hand side then it launches your default media player enabling you to play, pause and skip tracks. Above these buttons is the power button with a nice blue light above it, which glows orange when the machines drops into standby mode.


However, Toshiba does seem to have been a bit over-generous with the area dedicated to these buttons. When I first started typing I felt that the keys were a touch too thin and close together. It’s not quite bad enough to be called cramped but it does impinge on the speed with which you can type. Also as I picked up speed I found that I caught the edges of the keys, which does affect some notebook keyboards. The keyboard is also not quite as firm as the best I’ve used, though equally I’ve experienced far worse. Underneath the keyboard is a rather small trackpad and some small, rather flimsy mouse buttons – they do the job at least. 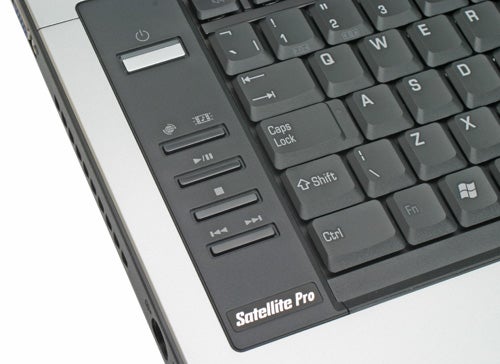 The size of the notebook means you get a rather considerable 15.4in widescreen display. This is a decent size to work on for an extended period without having to resort to squinting. However, those with keener eye sight may feel that at this size a higher resolution would have been desirable. The display quality is acceptable, with a Tru-Brite coating ensuring that colours are brighter and more vivid than those without this coating. Screen reflections were also not as bad as some I’ve seen, though viewing angles weren’t impressive – they rarely are on notebooks however.


Look round the notebook you’ll find a DVD Multi-drive on the right hand side that can create just about any type of recordable DVD, including dual-layer discs and DVD-RAM discs. Next to this you’ll find a modem connector, useful for when broadband isn’t available, and to the other side of the drive you’ll find two USB ports. Close to the front you’ll find a switch for turning the wireless on or off.

On the right hand side you’ll find two slots for PC cards, though one of them is actually an Express card slot. Having both is good news as I’ve only ever actually seen one Express card device as most items, including 3G data cards are currently only available in PC card format. Further up is a mini-Firewire slot, great for working with DV camcorders, and next to this is an S-Video slot. At the other edge is a VGA port. Round the back you’ll find two more USB ports and an Ethernet port, though unfortunately it’s only 100Mbps Ethernet and not Gigabit. 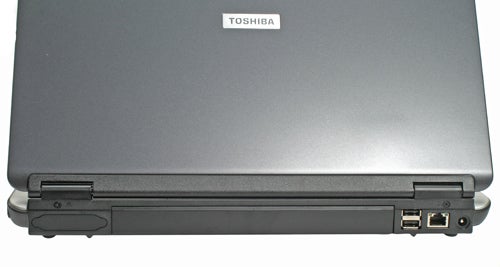 As a left-hander I was very aware of the heat being output from the CPU exhaust on the left hand side, as that was where I had the external mouse I was using. While noticeable, it wasn’t unbearable. In fact, the processor used inside is one of the most efficient that has ever been produced – an Intel Core Duo T2400, running at 1.83GHz. While notebooks featuring the new Core 2 Duo have started to appear, the Core Duo is still one of the most capable CPU’s that Intel has produced for some time, so it’s still impressive. In the specification we received only 512MB was supplied on a single DIMM. If another is added then not only would the capacity be increased but they would run in dual-channel configuration, increasing performance further.


The hard disk included is a health 100GB in size, which is now close to becoming entry-level for a notebook. Graphics are surprisingly not dedicated but supplied by a ATI Radeon X1400, which we felt was good enough to endure a run of 3DMark 06 at the screens native resolution of 1,280 x 800. The score of 1184 is hardly earth shattering but it’s a good deal more than you’d get from integrated Intel graphics. This hardly classes the Toshiba as a gaming machine but it means that you can enjoy modern games to some degree.

In terms of overall performance we felt a comparison to the similarly priced Samsung X11 was reasonable. The Toshiba is around £60 more expensive but it does outperform the Samsung convincingly in SYSmark and PC Mark, though that should be available now with the same CPU.


Battery-life was a mixed bag with it outlasting the Samsung for application performance but falling short for DVD watching, not quite reaching the two and half hour mark.

Some software is included. Norton Internet Security 2006 is a big name, though to be honest I find it more a nuisance rather than anything – I’d rather use a combination of the free AVG Anti-Virus and Zone Alarm firewall, if you’re not using a router with one built-in. You also get Microsoft’s One Note application- though not Word, which is odd. InterVideo WinDVD is also preinstalled. There’s a very cool Toshiba application which graphically shows the Wi-Fi access points in range but strangely, I couldn’t actually use it to connect to anything – I had to resort to the built-in Windows tool.


The Toshiba is in some sense a state-of-the-art laptop, showcasing current mainstream technology, in a smart, attractive and affordable package. The weak points are the limited resolution and a slightly disappointing keyboard but otherwise this is a very impressive machine.