The Toshiba Satellite P855 is part of Toshiba’s new range of aluminium finish, non-ultrabook top-end laptops. To grab a bit more attention than it might otherwise get, the Satellite P855 also packs-in a glasses-free 3D screen. Think glasses are what’s holding 3D back? This little laptop may be worth a look.

Without considering the glasses-free 3D screen, the Toshiba Satellite P855 seems like a fairly standard mid-to-high-end laptop.  It uses a 15.6in 1,366 x 768-pixel display with an LED backlight, giving it fairly normal proportions. Not teeny, and not quite a perfect desktop replacement. It’s a way off Ultrabook-like slimness, but gives more than a nod to aesthetics. 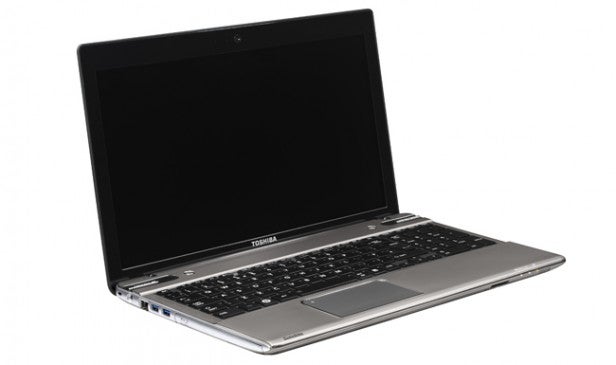 The Toshiba Satellite P855 has a two-tone black and silver design, and comes in two finishes. There are brushed-metal and dimpled-texture designs – the one we got a hands-on with was the textured version. It’s a somewhat acquired taste, but both the keyboard surround and lid are encased in aluminium, giving that strong, flex-free feel. The body is aluminium-lined plastic, rather than the full unibody metal type, and the bottom is finished with textured plastic rather than metal. 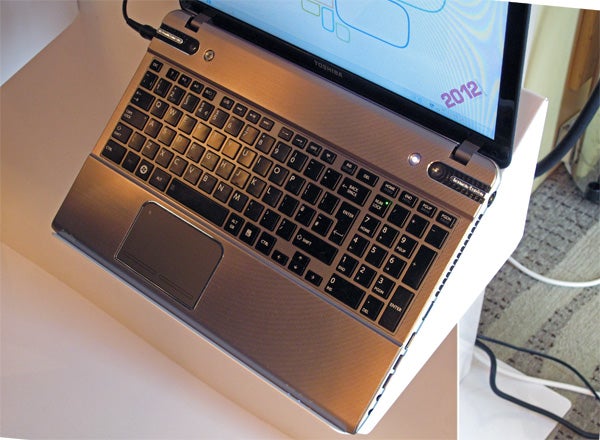 What you get in trade for the unibody design and looks of a top-end Ultrabook like the Macbook Air are an optical drive and better connectivity. The P8 series offers both Blu-ray and DVD multiwriter options, but the P855 comes with a Blu-ray drive as standard.

On the left edge are two USB 3.0 ports, a Gigabit Ethernet socket, the optical drive and the power socket. On the right are two additional USB 3.0 ports, the VGA and HDMI video outputs, 3.5mm audio and microphone jacks, and the grill heat outlet.

There are no slow-poke USB 2.0 ports here, and while there are no flashy extras like 3G or a fingerprint reader, the number of fast USB 3.0 sockets makes the Satellite P855 fairly future-proof. Two of the USB ports can be used to charge other devices even if the laptop is switched-off too.

The keyboard uses chiclet keys, which have a somewhat shallow but well-defined action. The model we saw had a keyboard backlight, but Toshiba says it’ll be an option rather than a standard feature for the series. Perhaps more notable is the trackpad. It’s large,  following the Ultrabook trend for giant pads, and is a clickpad rather than having discrete mouse buttons. There are flattened ring symbols towards the bottom of the pad that show where the button areas are, and the pad surface uses the same textured finish as the laptop’s body. 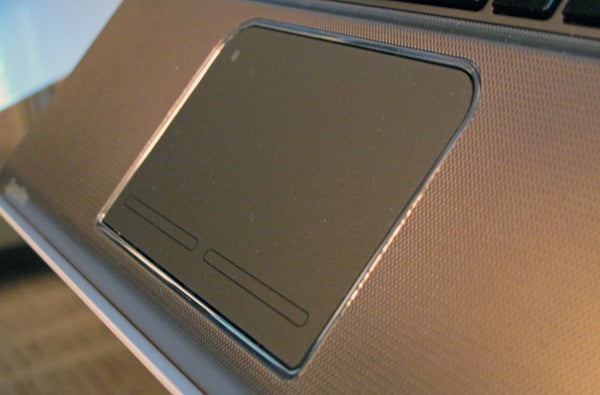 Up above the keyboard sit the Harman/Kardon speakers. There are two of them, and they provide a decent level of volume without causing distortion. However, they perform a way below the quad speakers of the Qosimo X870 gaming model, and can’t supple the bass of a “subwoofer” equipped model like the Samsung Series 5. 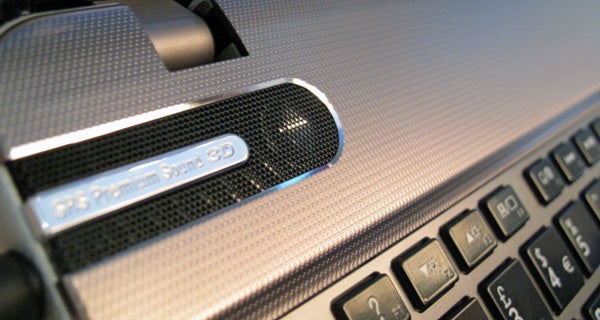 These trim elements are an important part of the personality of any laptop, but what about the basic specs? Toshiba didn’t reveal the exact specs of any P855 configs, but all will use Intel processors and NVIDIA graphics chips. We’re not yet sure whether the range will launch with Sandy Bridge processors or the upcoming Ivy Bridge versions. Using dedicated graphics chips rather than the integrated solutions of slimmer, sleeker models make the laptop a potential gamers’ delight. It comes with either a 1TB hard drive or a 750GB/8GB SSD hybrid storage solution, which will provide faster boot times.

It’s the screen that claims top billing, however. The Toshiba Satellite P855 is the glasses-free 3D screen version of the more conventional P850. While there’s a definite 3D effect, like any glasses-free solution it’s very picky about the positioning of your head. Move your head while watching and the image tends to distort in headache-inducing fashion. It does support head tracking, using the camera to monitor where you are, but we didn’t get to see this in action. 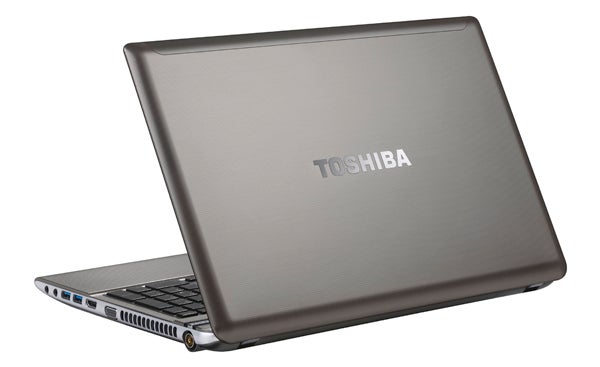 The Toshiba Satellite P8 series starts at £599, but the glasses-free 3D screen P855 model will sell for a significant premium. We’ll be back with more impressions in our full review.

The Toshiba Satellite P855 isn’t a big step forward in any respect, but is a respectable mid/high-end laptop. It uses a fairly good-looking aluminium-coated body, has decent connectivity and starts at a reasonable £599, sans 3D. We’re not convinced the glasses-free 3D screen is worth the extra outlay, feeling a little gimmicky, but we’ll be back with the full verdict in our review.