We’ve looked at a lot of interesting Windows 8 convertibles, including sliders like the Toshiba Satellite U920t, twisters such as the Lenovo ThinkPad Twist, detachables like the Asus Vivo Tab and more. Amongst all these exciting new and innovative form factors, it’s easy to forget that all Windows 8 requires from a good old laptop to come into its own is a touch screen. Many manufacturers are simply adding one of those to existing line-ups, and the 14-inch Toshiba Satellite P845T is one such beast.

Apart from offering touch, the Toshiba Satellite P845T is a traditional laptop in pretty much every way, though it mixes in a few premium… erm… touches with its generally budget feature set. It offers a patterned aluminium lid, a 14-inch TN touch screen with that classic 1,366 x 768 resolution, a backlit keyboard, Harman/kardon speakers, and full connectivity along with an optical drive. 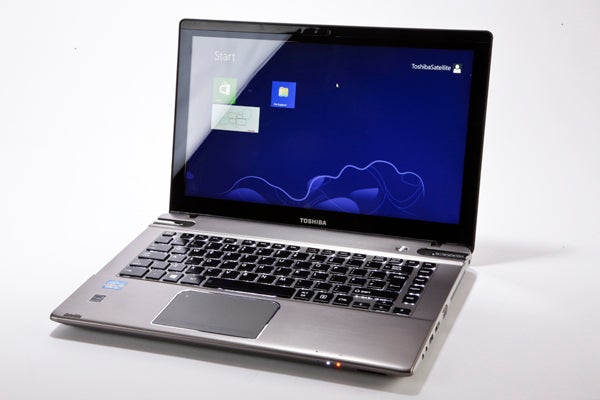 On the specs side of things you get a choice of Core i3 or i5 processors, 4GB or 6GB of RAM, and a 500GB or 640GB regular old hard drive.  All this will set you back around £630, which is affordable compared to most of the convertibles out there. Of course, those tend to offer more flexibility and better-quality IPS screens.

Oddly enough, despite sporting an etched metal lid and keyboard surround along with attractively textured plastics on its lower sides and base, the Satellite P845T doesn’t make a distinctly premium impression. Maybe it’s because, even on relatively affordable machines, we have become too used to the (usually) ultra-slim lines of Ultrabooks such as the budget-oriented Acer S3. Maybe it’s because that aluminium looks like plastic. Still, as regular laptops go this Toshiba is far from unattractive.

On the inside it sports a glossy black bezel, which transitions seamlessly into the display thanks to the single sheet of glass that covers both. Unfortunately, the webcam and dual array mics are seated in a glossy plastic strip of their own, but the overall effect is still easy on the eyes. 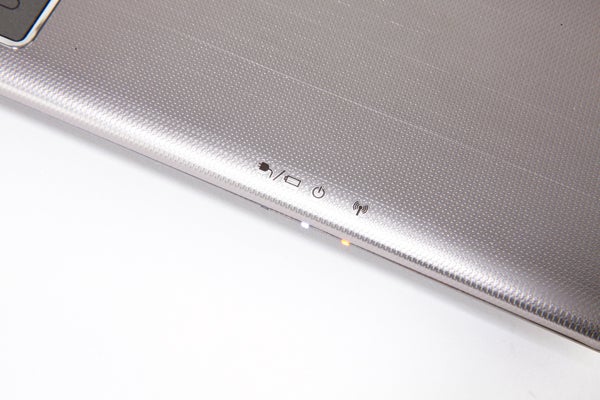 The Toshiba Satellite P845T’s keyboard surround and palm area is finished in the same textured metal as the lid, which feels great – if a bit chilly after you’ve lugged the machine around outside on a winter’s day. The glossy black keyboard matches the screen’s bezel nicely, though as expected fingerprints make an unsightly addition after typing a while.

Only the touchpad sticks out like a sore thumb, being a matt grey colour that doesn’t really match any other part of the Satellite P845T and not helped by how it’s made more prominent with a chrome surrounding strip. Quite why Toshiba didn’t go for black here too is beyond us. 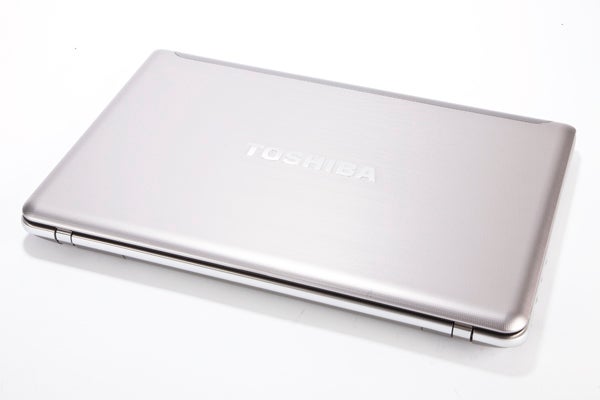 Build quality wasn’t anything to write home about either. The plastics used aren’t particularly thick, and even in the metal panels there’s a little more give than we like to see. The keyboard displayed some flex. Most worrying of all, however, was that flexing the lid even slightly made a corner of the glass panel come free. While this was easy to push back in and stayed in place unless we repeated the procedure, on a retail unit it’s hardly ideal.

Thanks to its ‘fat’ chassis, the Satellite P845T doesn’t skimp on the connections. On the right you’ll find a Gigabit Ethernet port, twin SUB 3.0 ports, and a neatly integrated tray-loading 8x DVD writer. 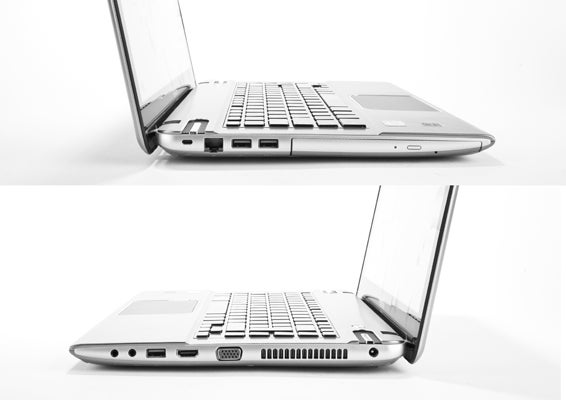 An SDXC card reader resides at the front, while the left houses 3.5mm microphone and headphone jacks, a third USB 3.0 port, and video outputs for HDMI and VGA. Wireless connections are catered for by Wi-Fi N and Bluetooth 4.0.