The Toshiba Satellite P50T-B-10K gets off to a good start with its two core components. The Core i7-4700HQ is one of Intel’s quad-core mobile chips, and it doesn’t have any of the performance-sapping power-saving features found in low-power laptop processors: it’s clocked to an impressive 2.4GHz, one core hits 3.4GHz with Turbo Boost, and there’s Hyper-Threading and plenty of L2 and L3 cache.

The processor is partnered with an AMD Radeon R9 M265X processor. AMD doesn’t disclose which architecture underpins this GPU, but we do know it’s got 640 stream processors clocked to 625MHz and 2GB of dedicated GDDR5 memory.

Eight gigabytes of RAM is the least we expect in a high-end laptop, and it has 1,600MHz memory – not particularly fast, but the quickest supported by the HM86 chipset. The 1TB Hitachi hard disk has ample space, but it’s a 5,400rpm model with just 8MB cache – we’d expect a faster SSD at this price. 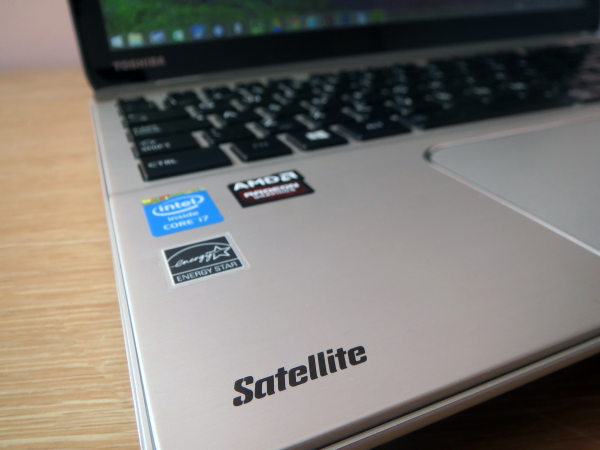 The Toshiba’s PC Mark 7 score of 3,479 is disappointing: on a par with lesser Core i5 chips, and around 2,000 points slower than some Core i7 parts. The Satellite’s Geekbench result of 12,210 is better, and among the fastest we’ve seen.

These inconsistent benchmarks followed through to real-world performance. Despite its powerful processor, the Toshiba often felt sluggish: icons in folders took a noticeable couple of seconds to load, and the same delayed affected taskbar icons. Search results appeared quickly in the Start screen, but we sometimes had to wait several seconds for our clicks to register.

Application loading times are not this system’s strong point, either, and the 18s boot time is twice the time of the best SSD-based laptops. Most of these issues stem from that slow hard drive: its cache is tiny, and its sequential read and write speeds of 93MB/s and 90MB/s are poor. 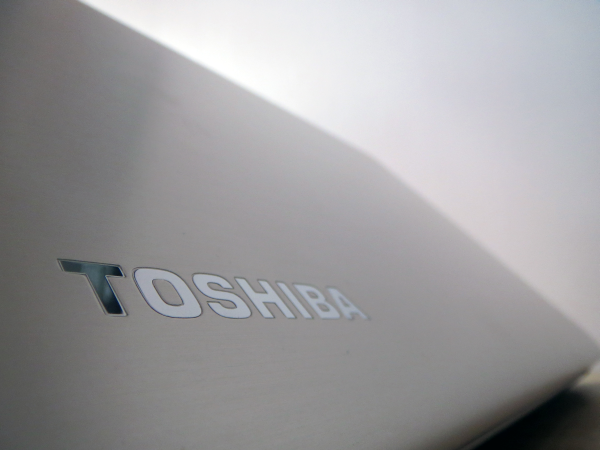 We’re certain that software plays a part, too. This machine is riddled with unwanted applications, from McAfee security software and Raptr to CyberLink MediaShow and Spotify. Further unnecessary software is installed on the Start screen, too. We turned off most of these applications and the Toshiba’s PC Mark score jumped from 3,479 to 3,616, and the BIOS boot time dropped from 5.5s to 2.6s – a stark reminder of just why the likes of us lot complain about so-called bloatware.

The Toshiba fell behind its rival in tougher tests, though. In the demanding Fire Strike run the Satellite’s 1,897 result wasn’t a match for the 2,024 from the XPS and its Nvidia silicon, and the Dell was ahead in every Unigine Heaven test. Despite this, the Toshiba still has power for modern games, as long as quality settings are toned down.

When idling or running undemanding software we had no issues – the Toshiba stayed cool and quiet.

It was a different story during stress-tests. After a few minutes of benchmarking the Satellite’s fans created a noticeable racket. The tone wasn’t consistent, either, with tiny modulations in the high-pitched sound from one of the internal fans adding another layer of irritation.

The Satellite didn’t keep its cool, either, with a top processor temperature of 93°C. That’s only a few degrees short of where the chip will throttle or become unstable, and it’s a cause for concern. It’s cold comfort that the graphics card’s temperature never rose to dangerous levels.

The base or keyboard didn’t become hot during our tests, but air is pumped from a vent on the right-hand side of the system. That’s exactly where your hand will be if you’re using a USB mouse, and it will make using a mouse uncomfortable. It’s also not possible to get inside this system to clean the fans out, as the base only has one small panel that grants access to the two memory slots. 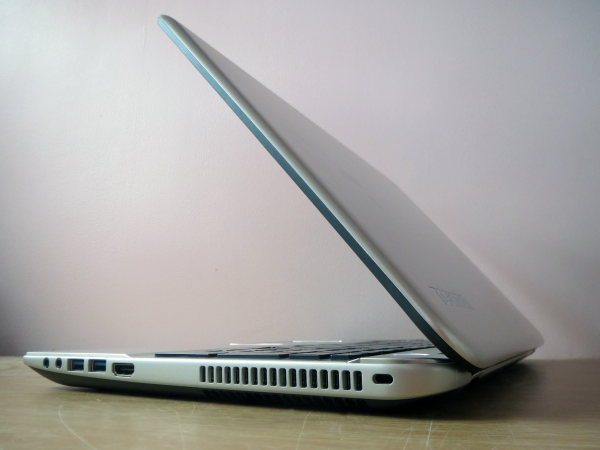 The Satellite has a four-cell battery that can’t be removed, and it lasted for just three hours and 26 minutes in our PowerMark test, which simulates web browsing and video chat with the screen at 40% brightness. That’s poor: the Dell managed over an hour more, and the almighty MacBook didn’t run out of juice after ten hours.

The situation didn’t improve when we ran a tougher test. We simulated a Work benchmark that includes Office applications, web browsing and video calling with the screen at 100% brightness, and the Satellite lasted almost an hour less.

Thirty minutes of charging gave the Toshiba 35% of its battery back. That’s a good result, statistically, but it’s only enough juice for just over an hour of use.

Used as our main laptop for the review period
Tested for at least a week
Used consistent benchmarks for fair comparisons with other laptops
Reviewed using respected industry benchmarks and real world use
Previous
Toshiba Satellite P50T-B-10K Review Next
Keyboard, Trackpad and Verdict Review