For the same price as some of the cheapest Ultrabooks, you can buy a laptop that can handle pretty high-end games, rather than just Peggle and World of Warcraft. More interested in packing-in components than style, the Toshiba Satellite L875-10G chucks away the Gok Wan sunglasses and shuns designer footwear to offer dedicated graphics, a powerful processor and 17.3in screen for under £700.

Design
The Toshiba Satellite L875-10G is a high-end alternative to the last Toshiba we prodded, the Satellite C855. Although the basic two-tone layout and contours are the same, this more expensive model is significantly better-looking. 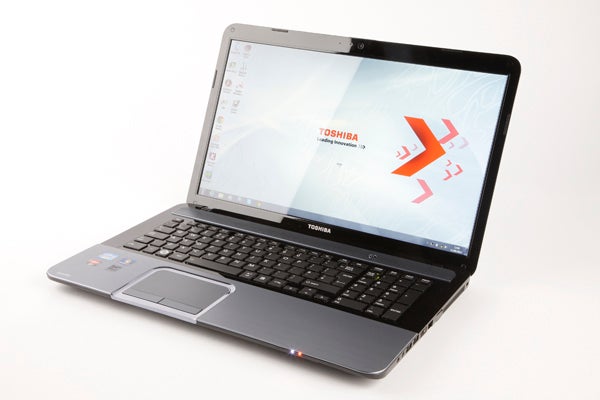 Its lid and keyboard hand rest are both finished with brushed metal, offering the delightful cool touch and strong feel that normal plastics can’t replicate. Most of the rest of the L875-10G’s body is plastic-fantastic, but the metallic areas are those that matter most anyway – being either those most prone to damage or those you touch most often.

There’s a little too much variation in finish across the laptop for it to look remarkably handsome – glossy black for the keyboard surround, metallic plastic around the trackpad, and different textures for the pad, mouse buttons and speaker grille. But for a gaming-capable laptop, it’s fairly tasteful, and there’s nothing too jarring to the eyes here. 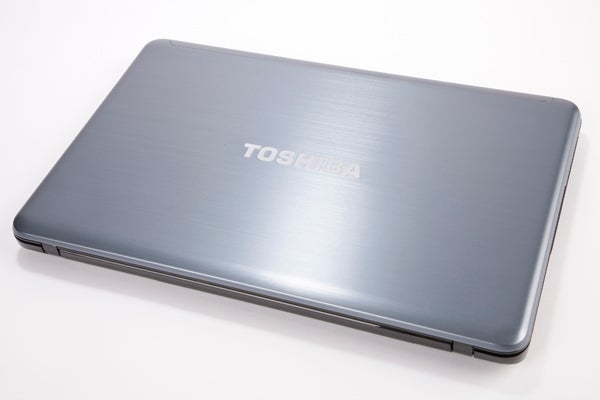 Weighing 2.7kg and sporting a 17.3in screen, consider this an at-home laptop unless you have bodybuilder-grade shoulders.

Specs and Battery Life
The Toshiba Satellite L875-10G has an Intel Core i5 processor, 8GB of RAM and a 1TB hard drive. It doesn’t offer the brand-new Ivy Bridge generation of processor, instead making do with last year’s Sandy Bridge model. We’ll look at what it’s capable of later. 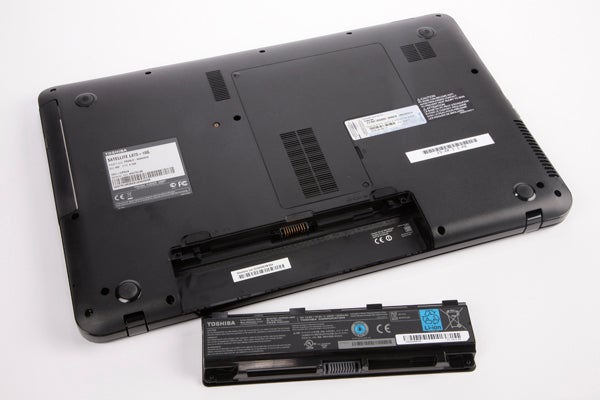 Its battery, a 6-cell 4200mAh unit, lasted for three hours 38 minutes when set to the MobileMark 2007 benchmark, which emulates normal productivity usage. When brightness was set at 40 per cent and both Wi-Fi and Bluetooth were turned off, it’s pretty clear that if you’re looking for all-day use away from the charger, you’re looking in the wrong place.

Connectivity and Speakers
Aside from a large screen and powerful innards, one other benefit of sacrificing portability is you – generally speaking – get an optical drive. The Toshiba Satellite L875-10G has a DVD multiwriter on its left edge, using a tray design. Some may miss the Blu-ray drive, but for those looking for an affordable gaming laptop, sheer performance will likely be more important. 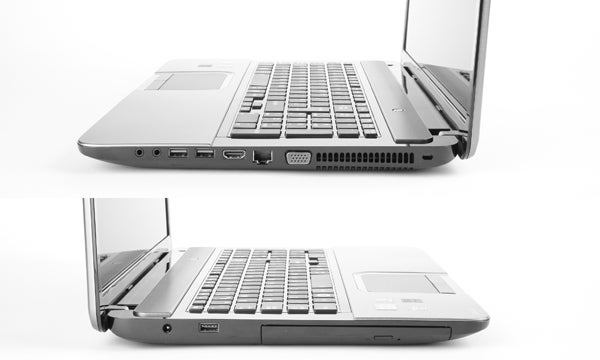 Next to the drive sit a USB 2.0 port and the power jack. Around the other side you’ll find a pair of USB 3.0 ports, the HDMI output, Gigabit Ethernet, VGA video output and the 3.5mm headphone and mic sockets. Additionally, there’s an SD card slot on the underside of its front and an HD webcam in the glossy screen surround.

In terms of connectivity you can’t see, the Toshiba L875-10G offers Wi-Fi n and Bluetooth 4.0. There’s no 3G capability, but such a thing would be unusual in an affordable desk-bound laptop like this. 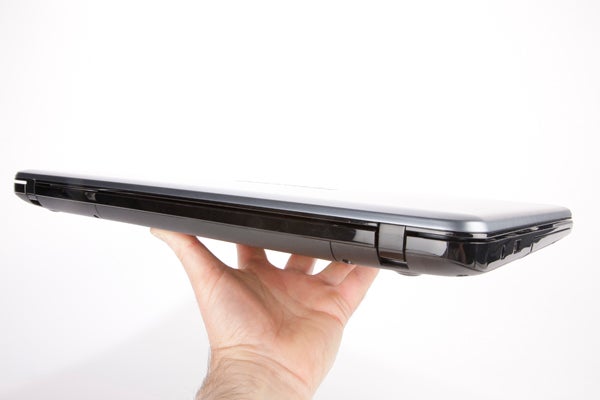 A pair of speaker grilles sit above the keyboard in a bar of textured plastic. Their sound quality is fairly weak compared with laptops that pack-in additional sub drivers or simply higher-quality speakers. The treble is a little fizzy and there’s no bass, but it they can go fairly loud without major distortion  – although at maximum volume there was some minor mid-range distortion, such as with characters’ voices in films.

Keyboard and Trackpad
The Toshiba Satellite L875-10G’s keyboard is a mixed bag. Its 17.3in frame lets the keyboard spread out comfortably, with just the arrow keys subject to severe cutting-down. However, key action suffers from a slight lack of definition – typing would feel more comfortable if the keys pushed against your prods a little more. There’s also no keyboard backlight, but such things are rare at the price. 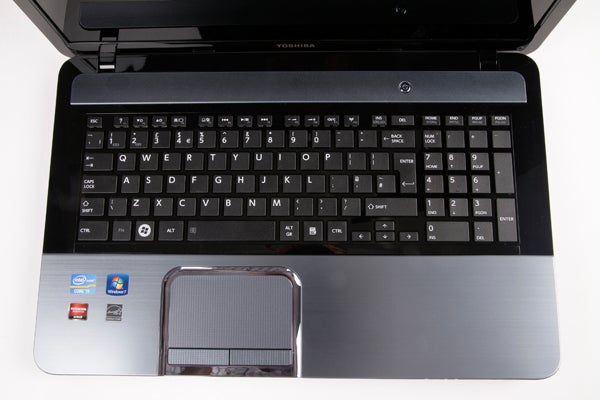 The trackpad fares better. Its surface sports careful texturing that makes swiping a finger across it very comfortable. And it’s worth noting that while it may look like there’s some embossed contouring going on here, it’s actually smooth and flat. 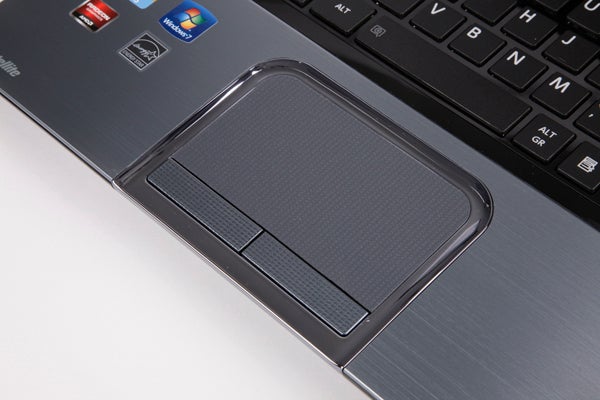 Just below, the mouse buttons do have a bonafide touchy-feely texture, and are completely separated. Whether deliberate or not, the right mouse button sits a little lower than the left at the central seam, adding to the already-tactile design.

Screen
Going all-out for screen inches, the Toshiba Satellite L875-10G’s display is 17.3in across. For a TN panel, the type most commonly seen in laptops, colours are fairly vibrant, but the maximum brightness setting isn’t exactly scorching – once again telling you that this is an indoors laptop. 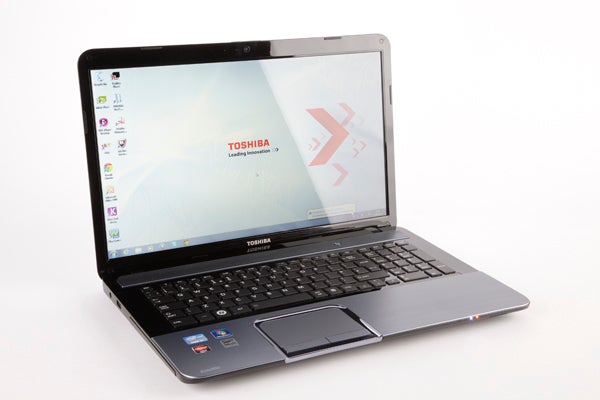 The screen finish is glossy too, further limiting outdoors potential. Given all these quibbles are minimised when you consider what the L875-10G is really for, the one lingering sour note is that it has a native resolution of 1,600 x 900 pixels, rather than Full HD, or 1,920 x 1,080 pixels. This leaves pixel density at a lowly 106dpi, with individual pixels clear to see – although admittedly this density is actually slightly higher than a 15.6in laptop with a 1,366 x 768 pixel display.

Performance
The Toshiba L875-10G features an Intel Core i5 -2450M processor, harking from the Sandy Bridge dynasty of 2011. It’s anything but ancient, although with Ivy Bridge laptops shipping out now, it’s not cutting-edge either.

However, in gaming-capable laptops like this – where graphics performance is paramount – the GPU will often be the top consideration. It uses an AMD Radeon 7670M dedicated graphics processor with 2GB of its own RAM, leaving the already-hefty 8GB of system RAM for other tasks. 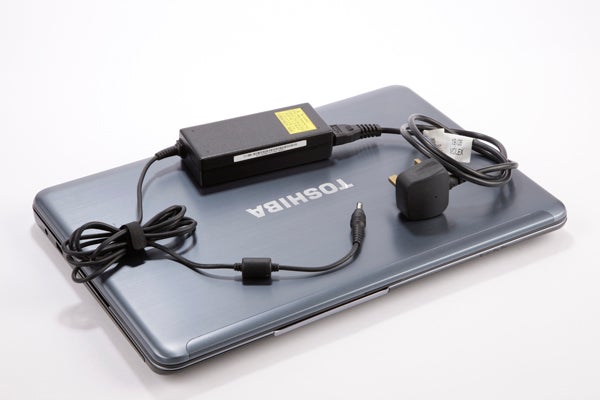 Performance across the board is strong. The Core i5 CPU is capable of handling just about anything you’d ask of a laptop, from fairly heavy image manipulation using something like Adobe Photoshop to video editing.

Gaming performance is good too. The AMD Radeon 7670M is a mid range card that can handle most modern games at playable speed – if not with every shader, shadow and water ripple set to max with very demanding (generally under-optimised) titles like Metro 2033. In the Stalker: Call of Pripyat benchmark it averaged 46.2 frames per second, offering a smooth, highly playable experience.

When under pressure, heat distribution isn’t perfect, with a hot zone under the right side of the keyboard – near the numerical keypad. However, after a solid hour of strain, the Toshiba L875-10G was only a little warm to the touch.

Value
Toshiba’s Satellite L875-10G gets you good performance and a mostly-good-looking design for your money. If you want an at-home laptop that will spend most of its time on a table or desk rather than jumping between laps, it gets you a bigger screen and stronger overall performance than an similarly-priced Ultrabook. 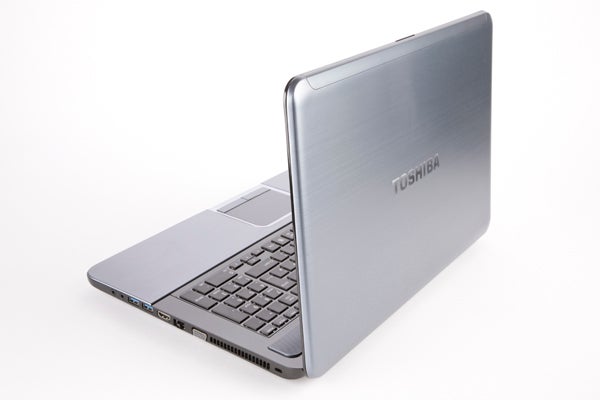 However, as the keyboard is less than impressive we’d tend to opt for the Lenovo G770, which offers superior key action and is available similarly-specced (but with a smaller hard drive) for £80 less. This is the inevitable fate of a laptop that can be matched almost spec-for-spec with models almost a year old. And, unless you need a laptop right this minute, we’d recommend waiting a month or two for the first waves of Ivy Bridge CPU laptops to arrive.

Verdict
The Toshiba Satellite L875-10G offers good performance for the money. Forgetting all about a super-slim, super-light body, extended battery life and fancy speaker arrays, it’s able to offer impressive gaming performance for under £700. And thanks to its part-metal bodywork, it feels sturdy enough too. However, the keyboard action could be better and maximum screen brightness isn’t great.