It’s not often that we see a laptop from an established brand at a price point as low as the £350 that will get you Toshiba’s 15.4in Satellite L300-29T. In fact, this makes it the cheapest laptop we’ve ever reviewed, so let’s find out if it’s an absolute bargain or has had a few too many corners cut.


As far as the chassis is concerned it’s certainly a step above what you might expect, with good overall build quality despite a hint of flex here and there. Its glossy finish means the lid is a real fingerprint magnet, but the striped pattern creates a moderately attractive, unassuming appearance.


Unfortunately, opening the laptop up reveals the same high-gloss finish on the keyboard surround and palm-rests, though at least the touchpad and keyboard itself are matt, as is – haters of reflective screen-bezels rejoice – the screen’s surround. 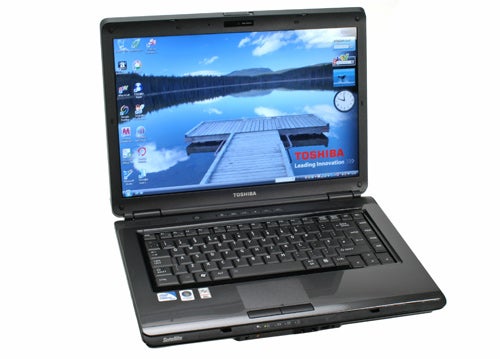 There’s a clasp to hold the lid closed, which is quite unusual these days but does mean your laptop will never open up when it isn’t meant to. Elsewhere Toshiba has also gone for more physical controls than many modern portables, with a physical Wi-Fi switch, volume control wheel, and a set of multimedia buttons below the screen that offer reassuringly crisp feedback.


Based on previous experience with the likes of the Toshiba Satellite A350D we were hoping the keyboard would be good: it doesn’t disappoint. Layout is excellent, with every key in its proper place and a handy set of shortcuts to the left. A generous amount of travel makes up for the lack of audible feedback, while the matt surface of the keys is much nicer than the glossy examples of many previous Satellites. 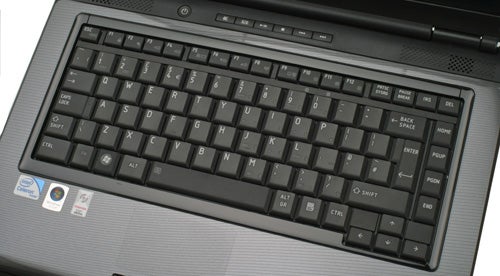 While lacking the white LED strip that made the touchpad on more high-end Toshiba laptops stand out, there’s no reason for complaint here, either. The large, sensitive pad sports a pleasant textured surface and its two matt black buttons are easier to click than the stiff chromed efforts on previous Toshiba laptops.

Connectivity is where we see the first real sign of cost-cutting on the L300-29T, with the main downer being the lack of any digital video output. While this is quite a common omission on budget laptops, a good example being the Sony VAIO VGN-NS20E, this Toshiba is the first laptop we can remember getting through the labs in the past few years that’s lacking a memory card reader.

On the L300-29T’s left you’ll find a VGA output, Ethernet port and two USB ports, as well as a 54mm ExpressCard slot with a neat hinged flap similar to the aforementioned Sony. At the machine’s front, between the wireless switch and volume wheel are headphone and microphone jacks, while the right houses a third USB port, the DVD-Rewriter and power connector. At the back of the machine is a modem port, always a welcome inclusion for those unfortunate souls still on Dial-up.

Thankfully, Toshiba maintains its track-record of providing its Satellites with excellent speakers, since the L300-29T is one of the more sonically-accomplished mobile machines around. Located just above the keyboard, its speakers put out clear and crisp audio at high volume levels, even managing passable bass, thus creating a soundstage that a laptop three times the price wouldn’t be ashamed of.


Sorry to say the screens Toshiba has used in its machines don’t have a similarly consistent reputation, with the Satellite A350D-202 being an improvement over the rather poor example found on its predecessor. However, the L300-29T’s ‘old-fashioned’ 16:10 aspect ratio 15.4in screen with its 1,280 x 800 resolution is one of the better budget laptop displays we’ve come across. 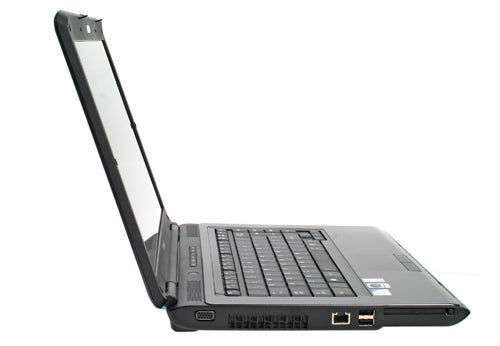 Its semi-glossy coating makes colours bright and vivid, while the display brings out more dark detail in photos and films than many cheap laptops. Backlighting is even and text is razor sharp, too, though viewing angles are as shallow as one normally expects with budget laptops.

So far so impressive, but it’s when we get to the Satellite L300-29T’s internals that the effects of the budget price really become apparent. First of all there’s the choice of Intel processor, which rather than the usual Core 2 Duos or cheaper Pentiums is a Celeron Dual Core T3000 chip running at a measly 1.8GHz. While this does make it one of the lowest-performing CPUs we’ve seen in a full-size system, it is a dual-core processor, so it’s powerful enough for everyday tasks and even Full HD video is not a problem.


What’s far more crippling is that this machine is trying to run Vista Home Premium, an operating system that really needs about 3GB of RAM to be happy (2GB at the very least), on less than a single gigabyte – keeping in mind that part of the system’s memory is going towards the integrated Intel 4500 graphics. And it’s noticeable in even the smallest things, with something as simple as opening a menu sometimes taking several seconds when multitasking, while intensive usage slows things down to a crawl.

One consolation is that RAM is the cheapest and easiest component to upgrade on a laptop; getting it up to a far more reasonable 2GB should only cost you about £15 if you install it yourself. However, not everyone will have the technical know-how or confidence to do so, and we can’t help thinking it would better if Toshiba just put 2GB in to start with.


Hard drive capacity is also the same as that found on most netbooks, with the Satellite L300-29T sporting a 160GB 5,400rpm hard drive divided into data and system restore/backup partitions. As expected there’s no Bluetooth or Draft-N Wi-Fi – just regular old 802.11g – on board, though these aren’t features most users will particularly miss. 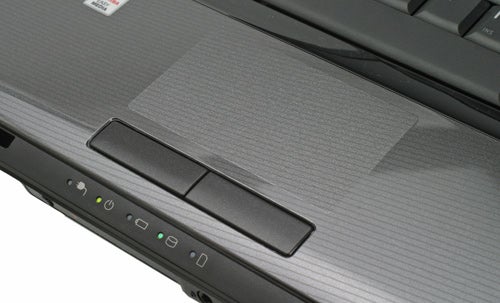 Given the limitations of its CPU and GPU, one would hope for good battery life from the L300-29T ‘s six-cell (44 Watt-hour) battery. Indeed performance was fairly decent, at just over three hours in our semi-intensive Productivity test. This might not be outstanding – the larger Acer Aspire 7735Z manages to almost equal it despite powering a far larger 17.3in screen – but for a cheap laptop it’s more than acceptable. 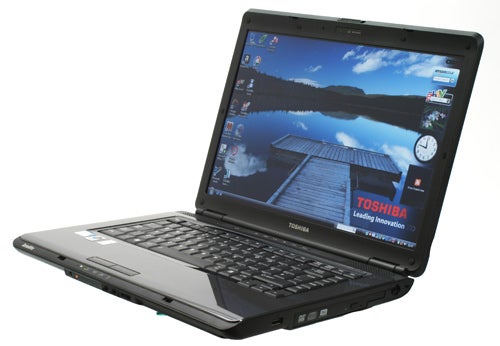 Overall then the Satellite L300-29T sports an excellent chassis and decent battery life for its £350 asking price, but is let down by its internals, especially the lack of RAM combined with its Vista OS. It’s real downfall, however, is that there are better value configurations of the L300 available. LaptopsDirect offer a Satellite Pro L300-26P with a dual-core 2.0GHz Pentium CPU and 2GB of RAM (albeit smaller 120GB hard drive) for £20 less (£330), or for £10 more (£360) you can get a L300-29X with a Celeron 1.8GHz CPU, 4GB of RAM and a 250GB hard drive from Comet.


Despite its decent chassis, excellent speakers and above-average screen, Toshiba’s Satellite L300-29T can barely handle Vista because of its 1GB of RAM, making it a poor choice unless you’re prepared to upgrade the RAM yourself.

While we can see the L300-T29’s Celeron processor dropping behind in most tasks, it’s not significant enough that the average user won’t find performance adequate.

Over three hours in the semi-intensive Productivity test is not bad for a budget notebook.

However, it’s by no means extraordinary, as you can see here where the 17.3in Acer nearly matches it.

Plenty of battery to let you see a fairly lengthy film, though The English Patient is a no-no.