The Toshiba Satellite C855 is a no-nonsense 15.6in laptop selling at a reasonably affordable price. We took a look at one of its lower-end iterations, packing a Core i3-2350M processor, 500GB hard drive and a chunky 6GB of RAM. Of course, man cannot live by specs alone and there’s more to using a laptop than counting the numbers.

Design
The Toshiba Satellite C855 has a pretty sober and practical design. It comes in grey, white, black and red finishes, and we got hold of the nattier colourful version. 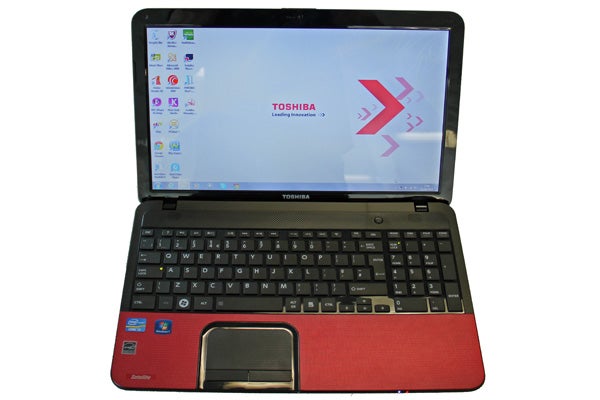 Its lid is lightly-curved high-gloss plastic, with a subtle cross-hatched pattern on top that helps to temper the otherwise-provocative finish. Plastic throughout, the C855 doesn’t feel all that luxurious, but then sub-£500 laptops rarely do. 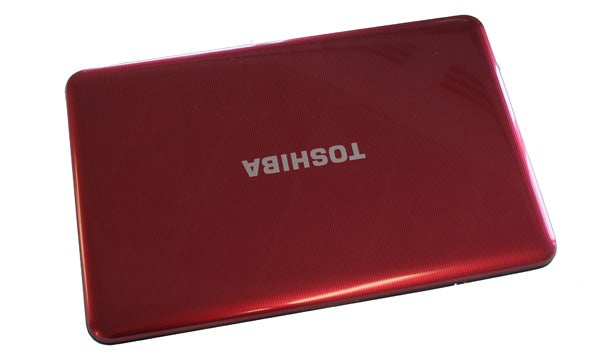 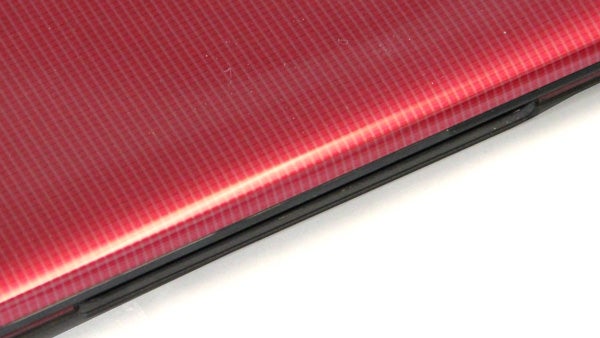 Inside, the glossy look is traded-in for embossed textures, which handily stop fingerprints from appearing, no matter how many packs of crisps you’ve munched mid-email. The only glossy bits are the spaces in-between the keys and a small area around the trackpad.

This is not a particularly impressive-looking laptop, but it side-steps many of the issues that tend to turn us off. There are no ostentatious shortcut buttons, the font on the keys is perfectly inoffensive and, texturing aside, everything is kept reasonably simple. That said, we do think it’d look better with a more consistent finish – a melting pot of teeny circles, squares, matt bits and glossy bits, it’s not the most carefully-styled laptop at the price.

Using a reinforced plastic slab over the keyboard rest, the C855 feels sturdy enough in use, but there’s significant flex to some of the bodywork. The plastic panel beneath the keyboard’s keys and the area above the optical drive are particularly prone to movement under pressure. 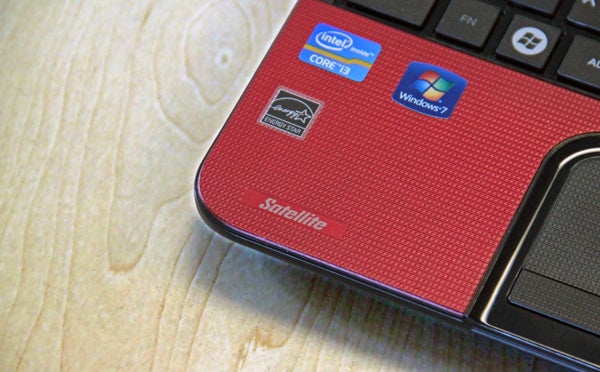 At 2.3kg, the Satellite C855 is a little heavy to take around with you all day, every day, but is a standard weight for a laptop of this size.

Connectivity and Specs
Although connectivity is standard for the most part, the C855’s ports do show that USB 3.0 is starting to bleed further into budget laptops. There are two USBs on the right edge, one 3.0, and another 2.0 port on the left.

Also along the right edge are the dual headphone/microphone 3.5mm jacks, HDMI video output, Ethernet port and VGA socket. Around the other edge is where the DVD multi-writer optical drive lives. It uses a tray design with the standard release button on the tray itself. Rounding off on-body bits, there’s an SDXC card slot on the front edge.

Delving further inside, the C855 range offers Bluetooth 4.0, Wi-Fi N, and an HD webcam in the glossy back screen surround. Our particular model featured a 2.5GHz Core i3-2350M processor with HD 3000 graphics, 500GB hard drive and 6GB of RAM.

Keyboard and Trackpad
The Toshiba Satellite C855 is a solid-if-unimaginative laptop in most respects. Reinforced in the right parts and with a grease-resistant design, it’s fairly easy to live with. However, the keyboard is disappointing.

It uses the standard chiclet design with a numeric keypad and no keys cut down in size to an annoying extent, but the key action is shallow and slightly indistinct. That the keyboard surround flexes a bit with anything but the lightest touch doesn’t help either. There are much better keyboards out there. 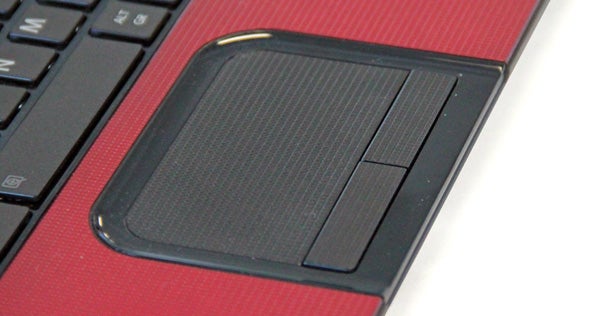 The trackpad is much less problematic. Both the pad and the keys use a high-friction embossed texture that’s fairly comfortable to run a finger across, and the two mouse buttons are completely separate, and large. There’s a bit of see-saw action to the buttons, but we didn’t find it an irritation. They keypad is to the left a little on the handrest to help you avoid brushing past it accidentally, another sign that practicality has been valued over aesthetics. 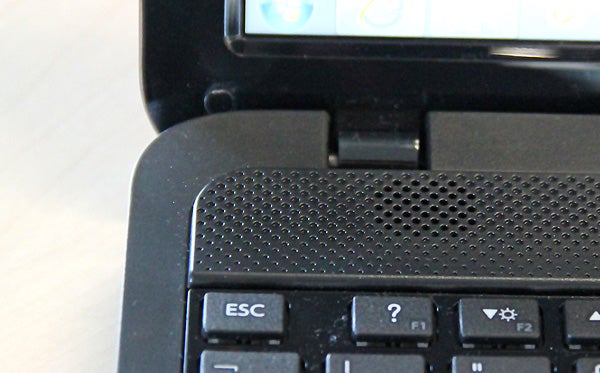 Speakers
Two speaker grills sit just above the keyboard, half-hidden in a pattern of circle cut-outs. Although Toshiba boasts about the Satellite C855’s “SRS Premium Sound HD” processing – suggesting a focus on sound quality – the internal speakers are fairly poor, with brittle, tinny sound that starts to become harsh at top volume.

Screen
The Toshiba Satellite C855 has a 15.6in screen of 1,366 x 768 resolution. Performance is solid, but still subject to the limitations of most budget laptops. There’s loss of brightness when viewed from an off-axis horizontal angle of around 30 degrees or more, contrast shift is apparent when the screen is tilted back and colours are not all that vivid.

It uses a glossy finish, which is problematic if you want to use the laptop outside, but in its favour maximum brightness is decent for a cheaper model.

Performance
The Toshiba Satellite C855’s entry to the market is a little ill-timed – just as the next-generation of Intel processors is being rolled-out. Instead of using the latest Ivy Bridge chipset, this laptop is stuck with last year’s Sandy Bridge model, running a 2.5GHz Core i3-2350M.

In our tests, it came out with a respectable score given its CPU thanks to its 6GB of RAM – where most at the price will offer 4GB. However, its 500GB hard drive still spins at the bog-standard speed of 5,400rpm. 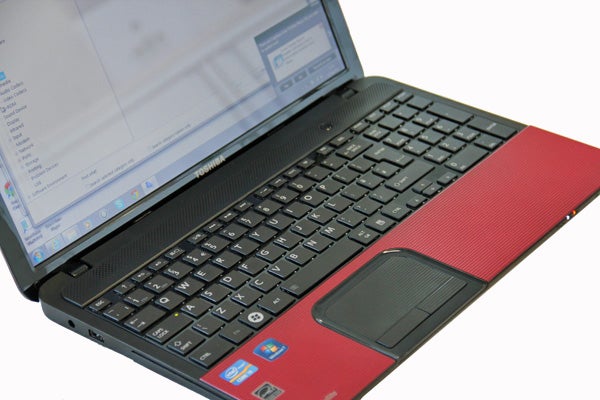 Although it’s ageing rapidly, the Core i3 processor here is more than capable enough for all basic day-to-day tasks including HD video and keeping a fistful of applications open at once. If gaming is a concern, though, you’re much better off seeking out either a laptop with a dedicated graphics card or a next-gen chipset model – whether packing Intel Ivy Bridge or AMD Triton. The integrated HD 3000 graphic chipset used here can handle basic games, but struggles with anything more challenging. It managed 44.7fps in our Trackmania test.

Toshiba claims that the 4200mAh battery of the Satellite C855 will last for up to five and a half hours, and according to our test they’re spot-on. With Wi-Fi and Bluetooth disabled and brightness set to 40 per cent, it lasted for five hours 39 minutes. This is above average, outlasting the Acer Aspire 5750, but is roughly matched by the Samsung Series 3 and soundly beaten by the HP DM4 – if you’re willing to spend a little more. 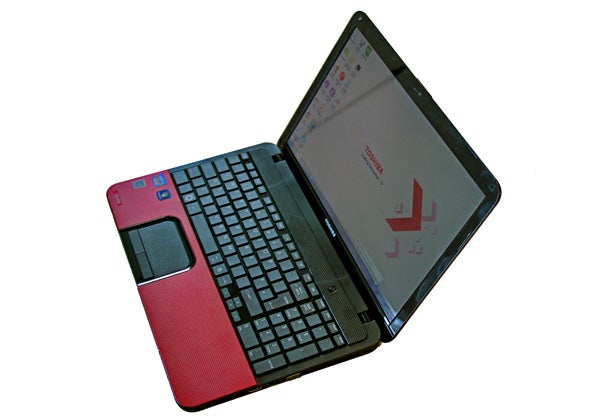 Value
Right now, the Toshiba Satellite C855 fares pretty well on a performance-per-pound basis, but once more entry-level Ivy Bridge laptops start appearing within the next few months, it’ll start looking pretty slow. Battery life is decent and the design doesn’t make any series mis-steps, but the keyboard and internal speakers are poor. For an at-home solution, we’d tend to pick the Samsung Series 3 over this for its better keyboard. And for out-and-about use the Acer Acer Aspire Timeline U M3 is a much better choice – its performance may be slightly worse, but it offers much greater portability and higher battery life.

The Toshiba Satellite C855 is a solid-but-uninspiring laptop. Its design is inoffensive but unlikely to excite and build quality is a little patchy. What turns us off the most, though, is the mediocre keyboard. The C855 has enough power for most casual tasks, but it’s not the best if you’re going to be doing a lot of typing.