What is the Toshiba Satellite C55-A-12U?

We recently looked at a couple of Toshiba Satellite laptops, the Toshiba P50t-A-10U and the Toshiba S50t-A-118. They had similar high-end specifications, retailed at £799 and £999, and looked at a glance very similar indeed.

Now we’ve been given a third Toshiba Satellite to look at: the
C55-A-12U. Retailing at £499, half the price of the P50t, it packs an
Intel Core i5 processor, 8GB RAM and a 1TB hard disk into its 15.6-inch
frame – an impressive deal on paper that could make it a great student/family laptop. Is there a catch? 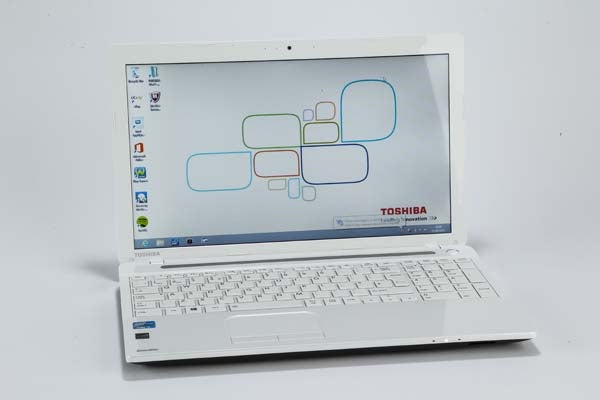 Although the C55-A-12U shares the Toshiba Satellite branding, you’d easily pick it out of the three laptop line-up. Its white plastic casing is vaguely reminiscent of the retired Macbooks, before the Air took their market share. That is, at least, until you see its underside where it becomes black plastic. It’s pretty minimalist with just a Toshiba logo on the top the sound bar above the keyboard, the word ‘Satellite’ below it, and the Intel Core i5 and energy star stickers to the left of the touchpad.

Like the old Macbooks, the white plastic feels cheap but durable, though how much the all white plastic will stain over time is unclear. It’s certainly an unusual style in a world that’s full of look-a-like brushed aluminum premium products, but it definitely feels cheaper. 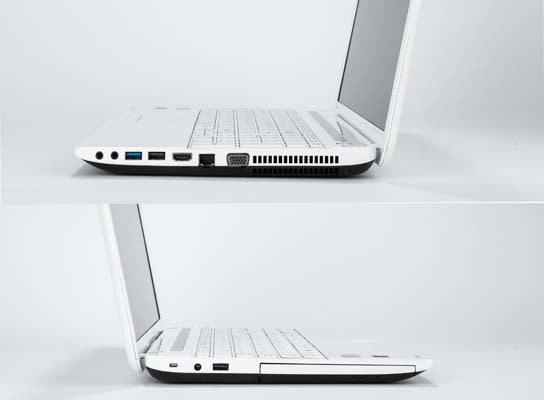 At 15.6-inches and 2.3.kg, there’s plenty of room for connectivity ports, and it even finds room to include a DVD drive. Alongside it, there’s three USB ports, a headphone jack, a microphone jack, an HDMI out port, a card reader, a VGA out port and an ethernet port.

The two Toshiba Satellites we looked at before had disappointing screens: the P50t was high resolution but not as sharp as it should be, and the S50t was 1366 x 768 and generally weaker. The C55’s screen matches the 1366×768 resolution of the S50t, which on a 15.6-inch screen feels a bit stretched and lacks sharpness. 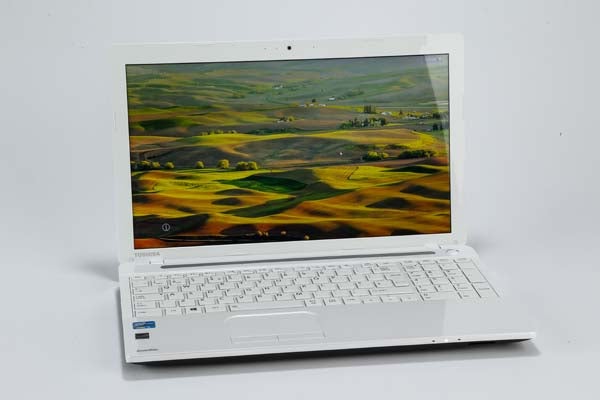 It’s also not a touch screen, which presumably is one of the cost-cuts to bring the laptop in at under £500. It’s not a serious issue, in our experience, but it does mean that some of the more tactile elements of Windows 8 are redundant.

The colours feel a little washed out, but the screen brightness is decent. The viewing angles are okay, if unspectacular – beyond a certain point, the screen is too reflective to be clearly viewable, but it doesn’t require you to be exactly head-on at least.

It’s a totally average, yet adequate screen, which is about as much as one can expect at this price.