Toshiba has always had a happy knack for creating good multimedia laptops, its Qosmio range in particular generating plenty of praise over the years. Qosmios, however, have always been expensive, so Toshiba has applied a little of the Qosmio special sauce to the Satellite A660 and given it a tantalising £699 price tag. 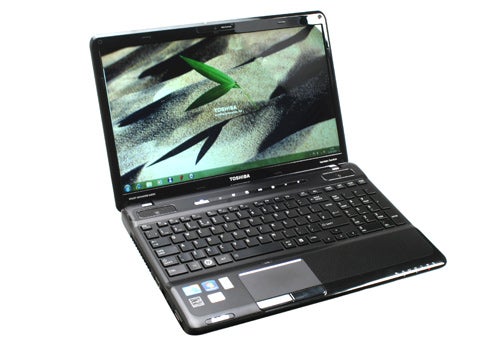 This is an impressive price considering this 16-inch machine sports a 500GB hard drive and a Blu-ray drive. These two add plenty of value to this already competitively priced machine, and the rest of spec doesn’t disappoint either. There’s an Intel Core i3 running at 2.13GHz at its heart, and it is supported by 4GB of DDR3 RAM and a competent Nvidia GeForce 310M graphics card with 512MB of its own memory. Wireless N Wi-Fi is offered as well, though the lack of Bluetooth and the use of slower 10/100 Mb Fast Ethernet are the first dents in its credentials.


Still, continuing the pluses, Toshiba appears to have finally fallen out of love with glossy black plastic. It hasn’t wandered far from its preferred materials mind, opting for a textured black finish instead with mere hints of glossiness around the edges. All-in-all it’s a definite improvement, though a little more contrast would be nice as the A660 looks a little gothic in spite of the touches of chrome and white lighting here and there. 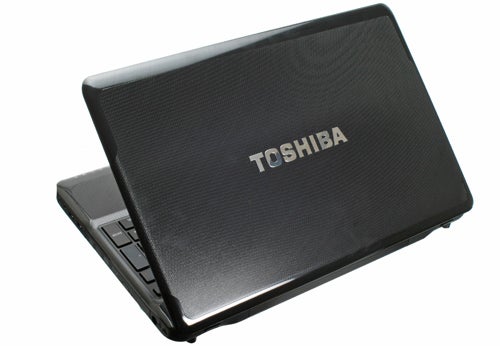 Another promising aspect as regards multimedia is the varied connectivity on the A660. HDMI and VGA are to be expected (nay demanded), but an eSATA and USB combo port is to be applauded even if they’re increasingly common these days – especially as this one supports USB standby charging. Another useful feature is the 34mm ExpressCard slot, which should allow the addition of a USB 3.0 expansion card or TV tuner should you want one.


Beyond this there are a couple more standard USB ports, two audio jacks (1x headphone, 1x microphone), and a memory card reader on the front edge that supports SD cards up to 64GB in capacity. This should avoid any potential compatibility worries, particularly for anyone using any of the large number of HD camcorders now relying exclusively on SD card storage. 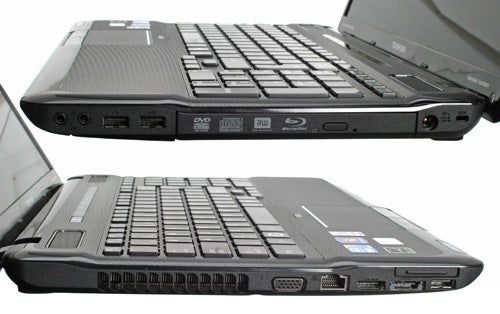 Other signs of the A660’s multimedia heritage are the backlight controls above the keyboard, though disappointingly the only ‘media’ based ones concern play/pause and volume controls. Others activate Toshiba’s ‘Eco Mode’, toggle wireless adapters, and launch Toshiba’s largely pointless Bulletin Board software. Not the best use of such space we could think of, but nothing worth getting in a knot over.

Toshiba’s laptop keyboards have been hit and miss of late, but the A660 counts as one of its better efforts. This might be due to the use of an isolation-style keyboard, the keys of which have nice light, snappy actions that aid fast and accurate typing. Some may find the lightness a little off-putting, but most will quickly come to enjoy the lack of effort required. Likewise, the layout is pretty much spot on, with handily withdrawn cursor keys and a full numeric key pad both present. 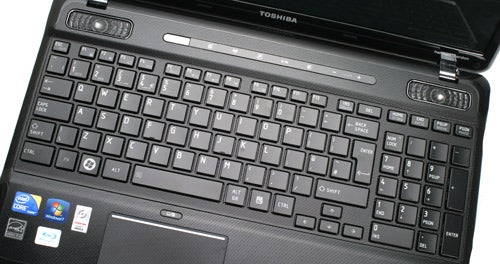 Those who abhor small, poky touchpads will enjoy the A660 as its example is particularly large. It doesn’t interfere with typing at all though, and it supports a decent range of multi-touch gestures. Compared to the recently reviewed Toshiba Satellite L650-10G, the buttons feel a tad flimsy, but they do the job just fine. 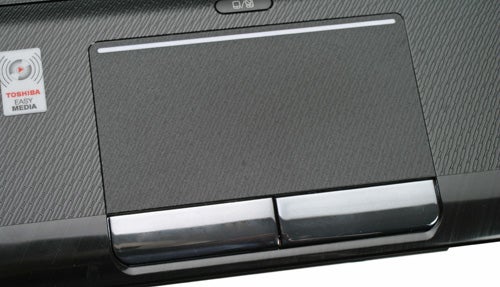 Where such multimedia laptops really need to excel, however, is in the audio-visual department. One need only look to the Acer Aspire 8943G as an example, which despite its £2,000 asking price fell short of expectations. Given the Toshiba costs a fraction of the price those expectations aren’t so high, but it still needs to perform. 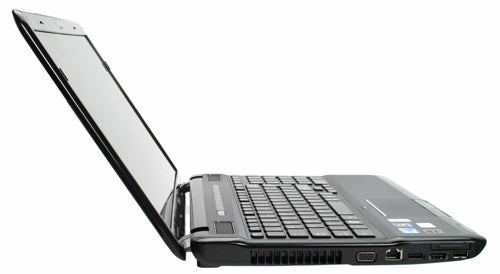 Unsurprisingly, given the price, the A660’s screen is only of the ‘HD Ready’ (1,366 x 768) variety, but it still manages to perform above the average for similarly priced laptops. Most notable in this regard are the viewing angles, which don’t fall away as disastrously as many laptops we’ve seen of late. Indeed they’re slightly better than those found on the Acer, though the A660 looks a little pallid in comparison. It still produced decent detail in HD films, though, making it a good choice for enjoying your Blu-ray collection somewhere other than your living room.

It’s a fact further enhanced by the harman/kardon speakers, which punch way above their weight. Even without the addition of Dolby’s Advanced Audio processing they sound rich and detailed, and Dolby’s tech adds a nice sense of atmosphere to films. As they’re only stereo speakers bass is slightly lacking, but even without any supplemental low-range driver the speakers on the A660 are more convincing than those on the 8943G. They certainly didn’t distort as often or as obviously as they did. Their full-rage nature also makes them better suited to music listening, making them more than adequate for occasional duties.

While the A660 is packed full of features, to keep its price down Toshiba has compromised a little in performance. This is well illustrated by the comparison with the Toshiba Satellite L650-10G, which costs only £629 but features a faster Intel Core i5 processor compared to the A660’s Core i3.

However this only equates to around an 11 per cent difference in our testing, and in general the Core i3 of the A660 will cope with everything the average user is likely to throw at it. Moreover, it still outperforms the Acer Aspire 5553G and its quad-core AMD processor, which just goes to show sometimes more cores doesn’t result in greater performance.


Neither does the A660’s slower processor hold it back in gaming. It performs nearly identically to both the compared systems, making it a good casual gaming system but not one suited to more hardcore and graphically intensive titles. You won’t have any problems with most MMO’s, such as World of Warcraft or EVE Online, and many older titles should run great with a little tweaking.

Things are similarly close in the battery life testing, though at slightly over three hours the A660 is the least long-lasting of the three. This is still good enough for a machine of this type, however, as its 16-inch screen and 2.62kg weight make it an unlikely candidate for day-to-day mobility. Slightly more disappointing is the DVD playback results where it fell short of two hours, but reducing the screen brightness would add at least 30 minutes to this figure.


Toshiba has hit a nice sweet-spot in the Satellite A660, offering solid performance and excellent multimedia features at a very attractive price. Toshiba could do better in the aesthetic design apartment, but the functional appearance is matched by equally functional ergonomics and the excellent speakers are the icing on the cake. 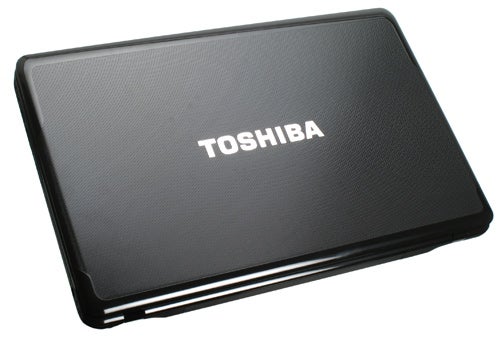 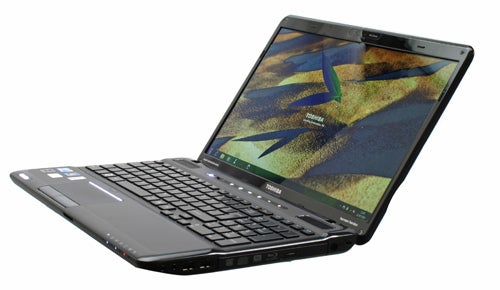 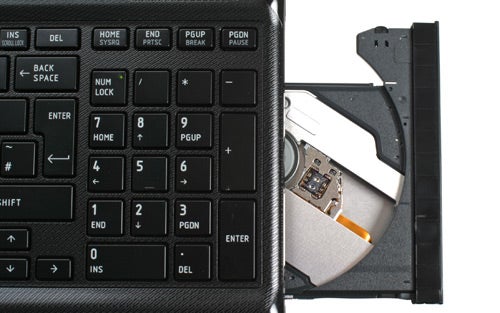