Today we’re taking a look at the Toshiba Satellite A350D-202. This latest 16in general purpose and entertainment notebook is basically a slightly different take on the Toshiba Satellite A350-11N. It uses the same chassis with mostly similar specifications, except that at its heart beats an 2.1GHz AMD Turion X2 Ultra processor and discrete ATI Radeon HD 3650 graphics card rather than the 11N’s 2.0GHz Intel Core 2 Duo and measly integrated graphics.


Another welcome change to go with the upgraded graphics is that the A350D now finally features an HDMI port, offering digital connectivity to your monitor or television. Aside from this and the S-Video connector the 202’s chassis is pretty much identical to its predecessor in every way, so if you want all the fine detail refer back to the earlier review. For the rest of you, let’s have a quick recap of what you’re getting. 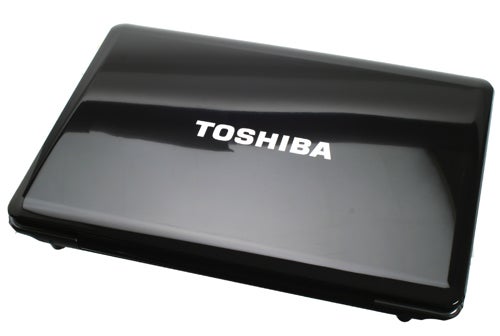 As with most consumer-oriented notebooks these days, the A350D-202 sports a piano black finish on the lid. Fingerprints are easily visible, so if you want to keep it looking good you’ll be using the included cleaning cloth a lot.


Opening the machine up, the 16in screen’s matte bezel houses the obligatory 1.3 megapixel webcam and the bottom part of the notebook is again glossy with a grey striped pattern to add some variation. 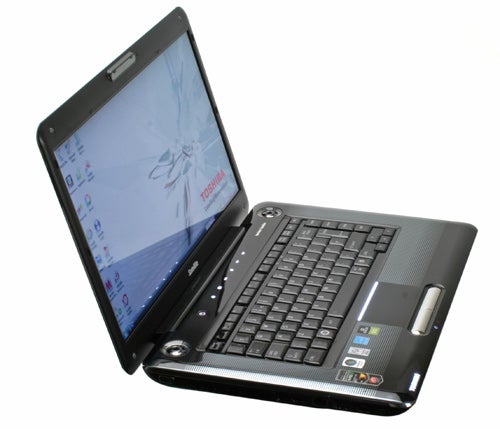 The glossy keyboard is very good overall, with positive feedback and excellent layout. It’s mostly a pleasure to type on, though keys can be a tad slippery thanks to their shiny finish and visually it’s an acquired taste – to say the least.


Below the keyboard, the wide and responsive touchpad has a nice matte surface and is easy to find and use in the dark thanks to a backlit white strip above it. The chromed touchpad buttons were rather stiff on the 11N and unfortunately this remains the same here. 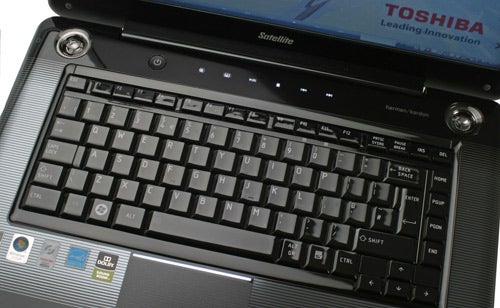 Between keyboard and screen reside a set of very usable touch-controls similarly backlit in white, as is the large round power button. To either side of these reside the sculpted Harman/kardon speakers, which as with other Toshiba notebooks we’ve reviewed are a highlight of the company’s mobile machines, producing a level of fidelity, volume and bass that’s a cut above most of the competition. They’re also enhanced by Dolby Sound Room, which delivers improved bass, a sound expander and its excellent virtual surround sound for headphones.

Getting onto the extensive connectivity, on the A350D-202’s side we have a very generous selection of video outputs, comprising VGA, S-Video and HMDI. Further along are an Ethernet port, two USB ports – one of which doubles as an eSATA port – and a mini-FireWire port. Above the latter three is a 54mm ExpressCard slot.


At the A350D’s front you’ll find a wireless switch for the included Draft-N Wi-Fi module, IR-sensor (though no remote is supplied), memory-card reader, headphone and microphone jacks and Toshiba’s signature volume wheel. On the right are a further two USB ports, modem and power inputs and the DVD-Rewriter. 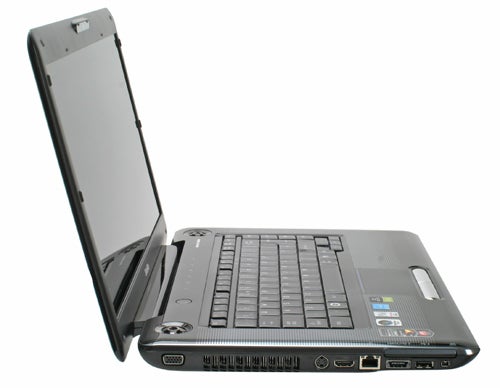 Together with the CPU, GPU, video connectivity and revised touchpad buttons, the 1,366 x 768 screen also appears to have had a bit of an upgrade, since the terrible viewing angles of the 11N have been eliminated in this update. Indeed, in terms of viewing angles, this is one of the better 16:9 notebook displays we’ve seen. It also maintains the strengths of its predecessor’s display, meaning reasonable greyscale performance, minimal backlight bleed and sharp text.


As mentioned before, the majority of the 202’s specifications remain unchanged, meaning you still get 4GB DDR2 RAM, which is more than the provided 32-bit version of Windows Vista Premium can handle, and a modest 250GB 5,400rpm hard drive. Which finally brings us to the biggest change: the processor and graphics chip, which are now AMD instead of Intel.

Straight off, we can have a guess at the main pros and cons of each model: Intel’s CPUs are generally better-performing and more energy-efficient, which combined with the integrated graphics should make for longer battery life. The AMD revision, meanwhile, should be more capable for moderate gaming and graphically-intensive tasks thanks to its superior graphics.


These assumptions are borne out by the battery results, where the older 350D-11N takes the lead by as much as a whole hour in the non-intensive Reader test. Looking at the PCMark Vantage results performance isn’t particularly encouraging either, since we see a significant performance advantage from the older A350’s Core 2 CPU across the board, with the single exception of the Gaming benchmark.

This is due to the ATI Radeon HD 3650 graphics card, which is almost getting into budget portable gaming territory. Indeed, the same Trackmania Nations Forever test (1,366 x 768, Medium Detail) that returned an unplayable 15.5 frames per second on the 11N gave a far more impressive 42.3fps result here thanks to the 3650’s extra grunt.


And with this card you’re not limited to ‘simple’ games like TrackMania either: the AMD variant managed a very respectable average of 32.5fps in Call of Duty 4 at the screen’s native resolution with all details turned on except with low model and water detail. So, while it mightn’t let you run Crysis, the Satellite A350D-202 will let you play less demanding games without too many compromises.

Overall then, what do we think of the A350D compared to its closely related cousin, the A350-11N? Over the 11N it offers digital video connectivity, a much improved screen and far better video card. Against this are a less powerful CPU and inferior battery life, meaning if you want portability or do a lot of CPU intensive photo editing or video encoding, you’re better off with the older model or something Intel based. Most significant, though, is the 202’s higher price. 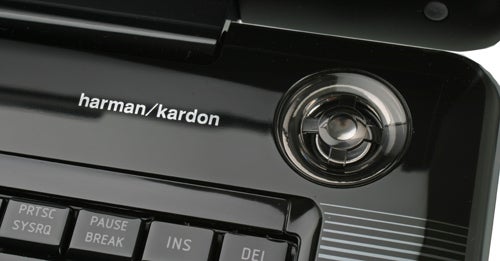 Usually with a refresh comes a small price hike, but in the case of the 202 it’s actually quite significant. Despite its cheaper processor, the discrete graphics has brought the price up by nearly £150 to £650. To put things into perspective, this isn’t a bad price for a machine which can comfortably run COD4, but it does put Toshiba’s Satellite A350D-202 into a whole different category of competition.

For an extra £50, for example, you can get the MSI EX620. It offers better CPU performance and (slightly) better battery life, in addition to Blu-ray and Bluetooth, but its discrete HD 3470 isn’t up to the gaming clout of the Toshiba’s HD 3650 and the latter also has a far superior keyboard and screen, classier looks and better build quality. 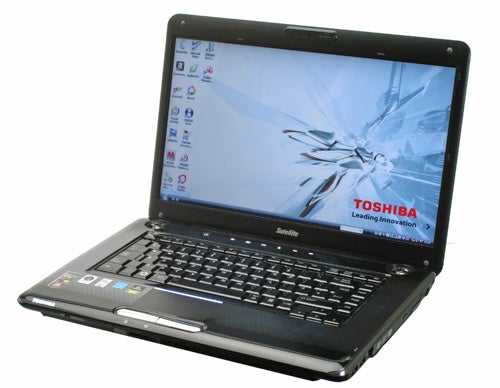 
Toshiba’s Satellite A350D-202 is an interesting alternative to its A350-11N, correcting some of the failings of 11N while shifting the focus to a machine that’s more suitable as a desktop replacement and will even handle a bit of gaming. If this is what you’re after, it’s a good option, but the combination of worse CPU performance, mediocre battery life and a higher price mean there are pros and cons to consider first.

In these PCMark Vantage results you can clearly see the advantage Intel processors of an equivalent clock-speed have over their AMD counterparts. In the Gaming benchmark though the A350D-202 comes out on top thanks to its Radeon HD 3650 graphics. In real life rather than synthetic benchmarks it gives the MSI an even sounder thrashing.

The AMD processor and discrete graphics card have negative effects on battery life, though the A350D-202 is not too bad compared to the MSI.

Three-and-a-half hours is about the most you can expect to get from the A350D-202 when using it frugally.

In MobileMark’s DVD-test the few extra minutes the MSI offers could be the difference between being able to watch a standard-length 1:30hr film.