Before the EeePC and its many imitators created a new, rapidly growing segment in the market (that of the cheap ultra-portable), the most popular type of laptop was the averagely specified 15.4 incher. This size offers the ideal mixture of portability and screen real estate for many users, and allows manufacturers to put in features and components at the cheapest possible price, and this is precisely the segment at which Toshiba is aiming its Satellite A300-177.


Design-wise, Toshiba has been on a bit of a roll lately, with the gorgeous Regza 40ZF355D 40in LCD TV and the curvaceously attractive DynaDock being recent examples. It’s a pity, then, that its winning streak seems to have hit a speed bump with the ‘striking new design’ it has instituted across its Satellite range. 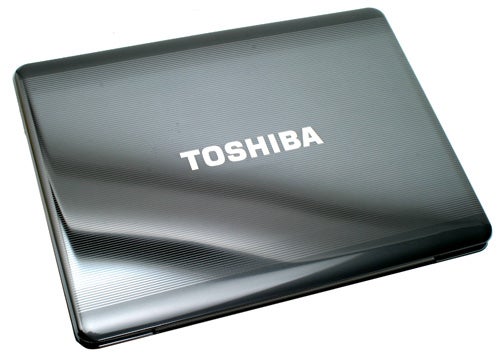 The first thing that slightly bothers me about the A300 is that it never looks like a complete whole when shut. The lid is raised off the base because both are curved, and protective rubber pads accentuate this further. If I had to sum up the Satellite’s physical design in two words, I would say curvy and high-gloss, which very much brings to mind the HP Pavilion dv6750ea. But unlike HP’s attractive Imprint finish, Toshiba’s Fusion finish is dull and uninspired (it looks better in the pictures than in real life, honestly).


The design basically consists of stripes. Yes, the company’s revolutionary new ‘Horizon’ pattern is just a bunch of plain, straight lines that narrow towards the edges. And on the notebook’s lid, they come in a sickly-grey colour against a graphite grey background. Depending on lighting conditions, this makes the machine look washed-out when closed, an effect not helped by the large off-white Toshiba logo in its centre. Nor does being able to see every fingerprint under most conditions pretty things up much, though you can always use the lid as a mirror. Of course, looks are a matter of taste, and if you like pin-striped suits (which Toshiba does actually refer to in its marketing), the A300-177 might suit you (sir). 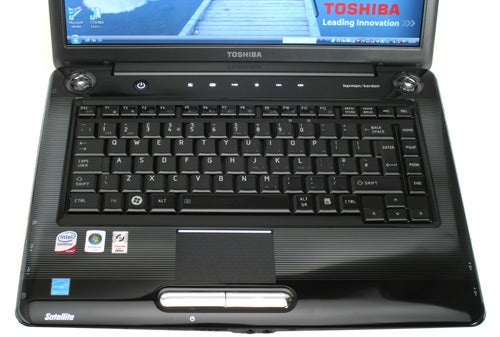 Fortunately, things improve somewhat when the laptop is opened up. Though we still have the same pattern and glossy finish, this time it consists of silver stripes on piano black. Surprisingly, the black finish extends to the keyboard, which makes this the only laptop with a glossy keyboard we have ever encountered.


And that’s not a good thing. Not only does it fail to look particularly attractive (something that might have been remedied slightly by extending the striped pattern across it), but it gives the keys an odd feel and makes them slightly slippery, not to mention finger-print magnets. All of which is a pity, since apart from that it’s actually quite good. What it lacks in travel it makes up for with an assured ‘click’ response, and layout is logical, with the FN key in its proper place (between the CTRL and Windows keys) and an enlarged ENTER key.

Moving onto the touchpad, which is an important part of the overall design, again inspires mixed feelings. The pad does carry on the Horizon print, which is a nice touch, but the two giant chrome-finish buttons underneath it are simply ugly – especially since the chrome look is not matched anywhere else on the A300. In use there is a similar mixture of good and bad. The pad’s matte surface is pleasant to work with, but while the buttons’ size makes them easy to locate, they require too much pressure. 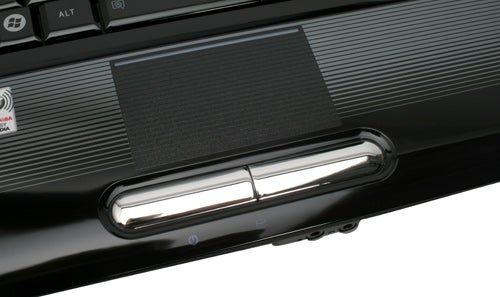 Again reminiscent of HP’s dv6750ea, the Satellite has touch-sensitive media controls above the keyboard. Despite the fact that I still prefer physical buttons towards a notebook’s front, their implementation here is almost flawless. They don’t produce activation sounds, but are incredibly responsive and strongly backlit in white, making for perfect contrast with their glossy black surrounding. Like the effortlessly visible status indicators just below the pad’s buttons, this means they are easy to discern even in bright outdoor light.

The first touch-control switches backlighting on/off, not only for the media shortcuts, but for a subtle ‘Satellite’ logo on the bottom left corner of the chassis, and more usefully, a svelte white strip just above the touchpad. It looks nice and makes the pad easier to find in the dark. Sound control, meanwhile, is rather unusual. Apart from mute, which is unfortunately assigned to an FN keyboard shortcut, volume is adjusted by that rarest of things in modern technology: a good old fashioned dial, which is a pleasure to use. 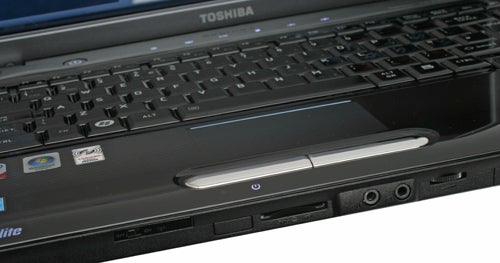 This dial logically resides at the front edge of the laptop’s chassis, together with a wireless switch, infrared port, memory card reader (SD, xD, Sony MemoryStick), microphone in and headphone output (which, as a nice bonus, doubles as S/PDIF). I was disappointed to find no form of digital video out, especially since most competitors at similar price points do offer this. But you do get VGA and S-Video, which join IEEE1394a (FireWire/i.LINK), two USB 2.0s, an ExpressCard slot and a LAN jack on the left. Finally, along the right we have the modem port, two more USBs, a Kensington security lock and DC in.

This leaves the back of the laptop completely free, which is necessitated by the way the A300’s hinge works. Build quality, meanwhile, is top notch, with no flex or creaking anywhere, even on the thin lid. As is usual on most laptops these days you’ll find a web camera (1.3-megapixels in this case) and microphone in the top bezel. Not only does this let you make video calls, but it allows for Toshiba’s Face Recognition feature. This is a security logon with your face as the key, but has too many disadvantages: it won’t work if you change your appearance slightly, and Toshiba admits that ‘faces similar to a registrant’s may be recognised accidentally’, making it a trendy gimmick rather than a genuinely useful feature.

The 1,280 x 800 high-gloss screen is fairly standard for a notebook in the A300’s class. Though it showed no obvious artefacts in DisplayMate, viewing angles are slightly poorer than one might expect from a laptop TN, with dramatic loss of contrast when moving even slightly off-angle. As long as you’re in the sweet spot though, it’s perfectly acceptable for entertainment use – just keep in mind that thanks to the lack of a discrete graphics card, you can forget about all but the most undemanding games. 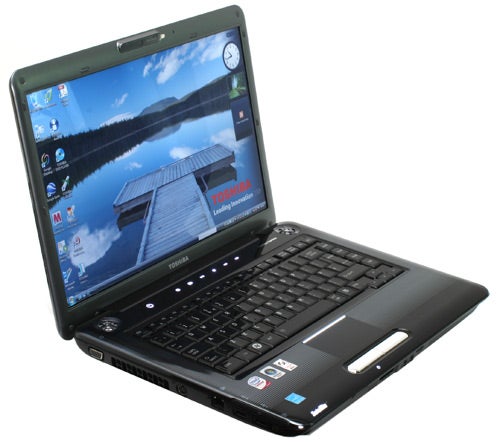 The rest of the A300-177’s specifications don’t leave you wanting, however, with 2GB of RAM and a generous 200GB hard drive providing ample storage, while the T5550 Intel Core 2 Duo zips along at 1.83GHz. Thanks to this, the Toshiba is fast enough in most scenarios. Naturally, there is also a DVD writer on hand, which can handle most media on the market (including DVD-RAM), while its weight is again average at 2.9kg. The only weak point for portable use is its unimpressive battery life, lagging up to 30 minutes behind the HP Pavilion dv6750ea (which has a dedicated nVidia 8400M graphics chip) despite also using a six-cell battery.


The A300-177 did come with an English-only safety manual, which is far more extensive than most (even covering typing ergonomics), a clear Quickstart guide, support leaflet and universal manual for the whole Satellite range. Software of note includes a 60-day trial of Microsoft Office Student Edition and full version of Microsoft Works 8.9, Ulead DVD MovieFactory and 30 days of updates for McAfee Internet Security Suite 2008.

Finally, having left the best till last, are the speakers. They’re two small, circular units positioned on both sides of the laptop just above the keyboard. The drivers are deeply seated beneath a transparent cover, though I wish Toshiba had made these chrome to match the touchpad buttons. As is, they merely add to the inconsistency of the Satellite’s design – but on the other hand I can understand Toshiba wanting to show them off, since the sound they produce is nothing less than stunning for their size.


They’re Harman Kardon units, and while in the technology world brand names are not necessarily a guarantor of quality, Harman Kardon has consistently produced notebook speakers that have exceeded rival efforts. Thankfully, it doesn’t break its tradition of excellence here. With hardly a hint of distortion even at maximum volume levels and deep, rumbling bass that shakes the whole chassis, their only (minor) weakness is that treble can come across as the slightest touch strained. But make no mistake, these are easily the best notebook speakers we have heard at this price point, even beating some smaller standalone systems.

What we are left with is a laptop that is fairly generic in most respects, except its design, which is largely unattractive, and its speakers, which are astounding. While turning movies and music into an aural joy, it makes this Satellite’s inability to play most games (it only scored 16.4 frames per second on low settings in TrackMania Nations Forever) even more of a pity.


The A300’s biggest problem, however, is the competition: the HP Pavilion dv6750ea is still available for only £20 more, and though the processor is slower and the hard drive smaller, the graphics card is superior and has digital out in the form of HDMI. Most importantly, as you can see from our charts, it offers much better battery life. 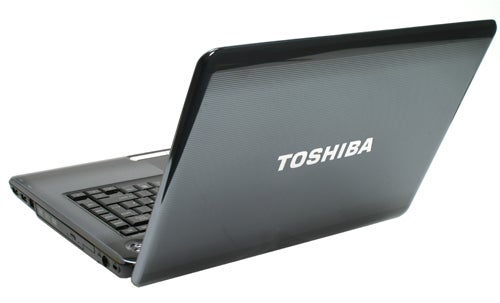 Another strong contender is the latest build of the excellent Dell Inspiron 1525, which for only an extra £40 gets you a similar system with customisable looks, a bigger hard drive, better camera, HDMI-out ”and” Blu-ray drive! The only reason you might still go for the Satellite are its far superior speakers, or if you particularly like its quirky looks. 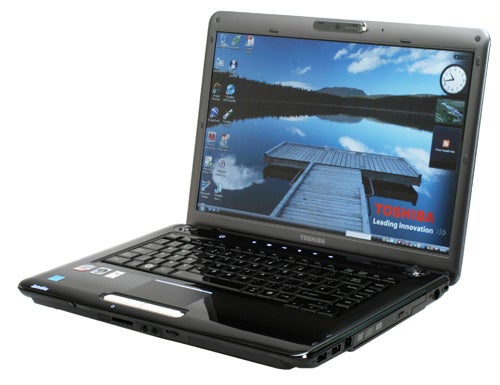 
The Toshiba Satellite A300-177 is an average 15.4in laptop with a slightly below average screen and battery life, while the unique design is at best an acquired taste. Overall it’s not a bad machine, but for just a little extra the competition offers far more. The one area where it excels is in offering the best sound quality of any budget 15 incher we’ve come across, thanks to its truly excellent Harman Kardon speakers. 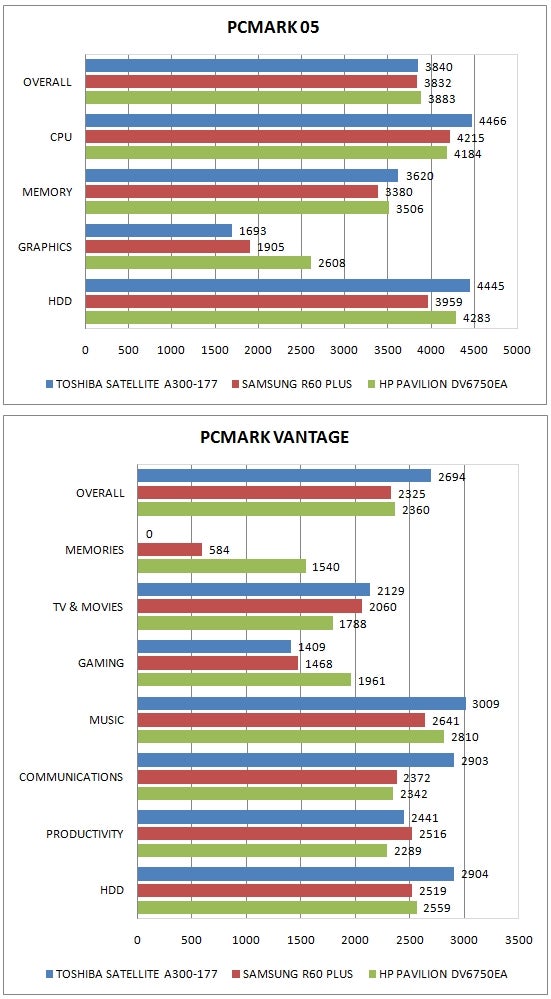 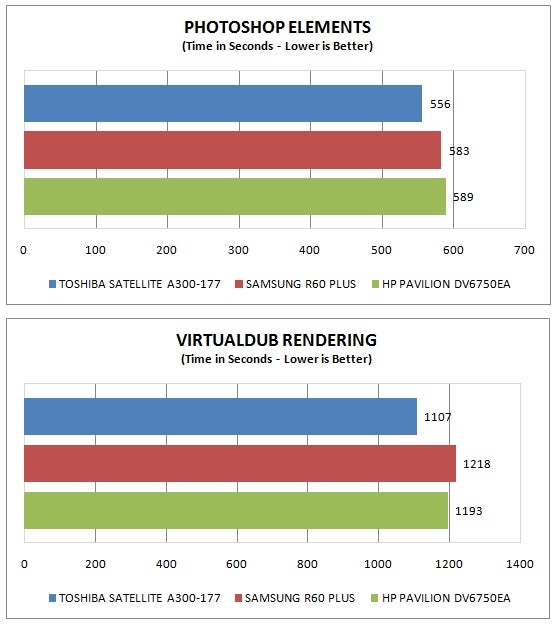 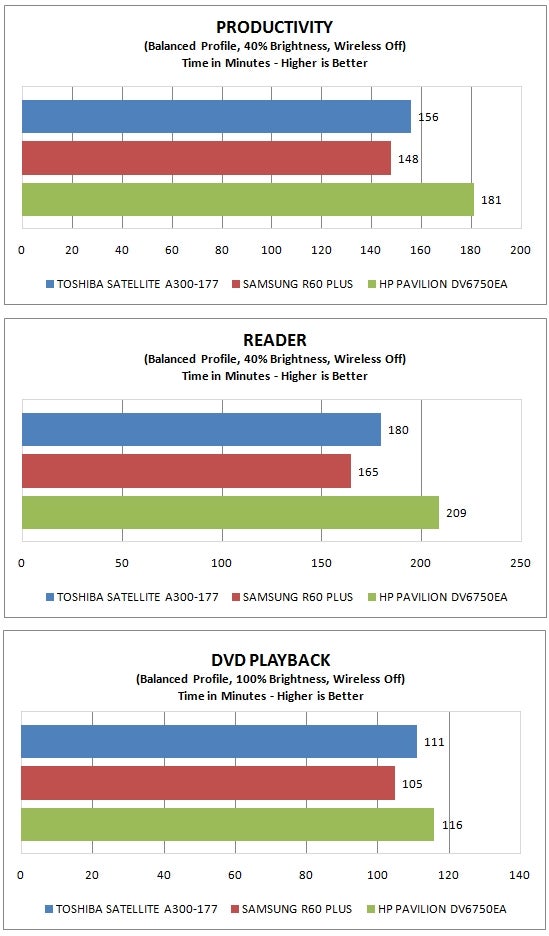