So here it is at last: Toshiba’s first stab at an active 3D TV. Better late than never, we guess.


And to be fair, this first stab is no half-hearted, toe-dipping exercise. For the 55WL768 weighs in at a mighty 55in across, suggesting healthy confidence on Tosh’s part in its new 3D talents. After all, on a screen this size there will be no hiding place for any performance flaws. 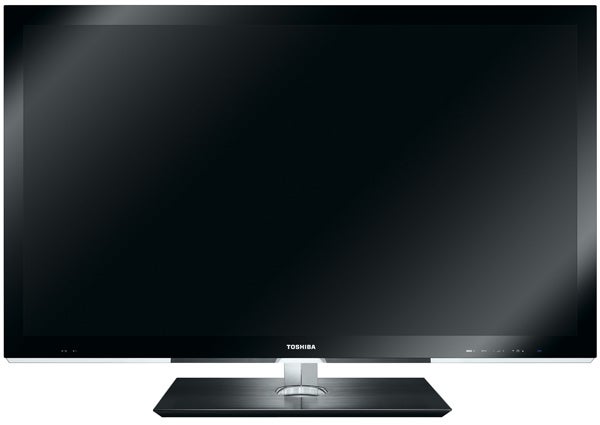 The 55WL768’s confidence isn’t just apparent in its size, either. For it’s the second TV we’ve seen from Toshiba recently to have been styled by the internationally renowned Jacob Jensen Design studio.


Actually, we weren’t quite as compelled by the design when we first saw it as we’d expected to be. For while it was certainly sumptuous in the build quality department, its looks weren’t all that different to other TVs out there in the marketplace. However, the extra size of the 55WL768 makes Mr Jensen’s efforts look more worthwhile, for it emphasises the impressive slenderness (just 28.9mm) of the set’s profile; the smoothness of the single-layer fascia; the crispness of the pleasingly small bezel; and the rather pleasant chrome-like trim around the set’s outer edge. Even the metallic build quality seems more obvious at such a large size. 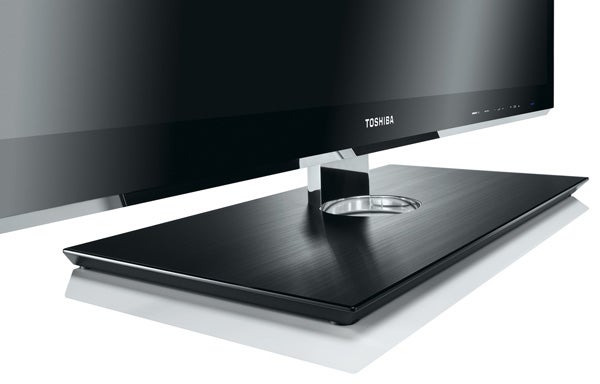 We’re not suggesting here that the 55WL768’s size makes its design look more original or cutting edge, mind; just that it makes it look more classy, for want of a better word.


The 55WL768’s connections are just about up to spec for a £1,600 TV. The increasingly de rigueur four HDMIs are joined by highlights of two USB inputs, an Ethernet port, and rather surprisingly given Toshiba’s slightly half-baked (so far) approach to online TV functionality, built-in Wi-Fi.


Sadly, though, this integrated Wi-Fi doesn’t actually coincide with Toshiba really getting its online act together. In fact, trying to get a handle on many of the 55WL768’s features proves a confusing, complicated and ultimately frustrating business.

For instance, we were rather startled to spot among the 55WL768’s connections a satellite connection, and naturally presumed this meant the TV had a Freesat HD tuner as well as a Freeview HD one. But no.


Instead, it’s just a ‘general’ satellite tuner. You have to tell the TV what satellite you’re pointed at (19.2E for most of us, we suspect), and then, after a monstrously long tuning process, you’re left with a list of every channel found at that satellite location, regardless of what language it might be in, and with no Freesat ‘wrapper’ whatsoever. The amount of pointless stuff you have to pick your way through is thus nothing short of depressing.


Next on Toshiba’s fudge list are its online capabilities. For despite the Wi-Fi showboating, the only online services on offer are the BBC iPlayer and YouTube. Obviously these are both desirable enough in their own right, especially the iPlayer. But with so many brands offering so much more on the ‘smart TV’ front, the 55WL768’s online offering isn’t nearly substantial enough for such an ostensibly premium TV.

A further mess comes with the 55WL768’s multimedia capabilities. For while the set proudly boasts that it has file formats it can handle via a network, it’s more of a digital rendering device than a true multimedia portal in the usual TV sense of the word, producing a much less ‘integrated’ feel to its cooperation with your PC. As a result, we suspect precious few people will have the time, inclination or basic PC knowledge to get its DLNA capabilities working properly. The USB ports actually handle more multimedia files comfortably than the DLNA system. 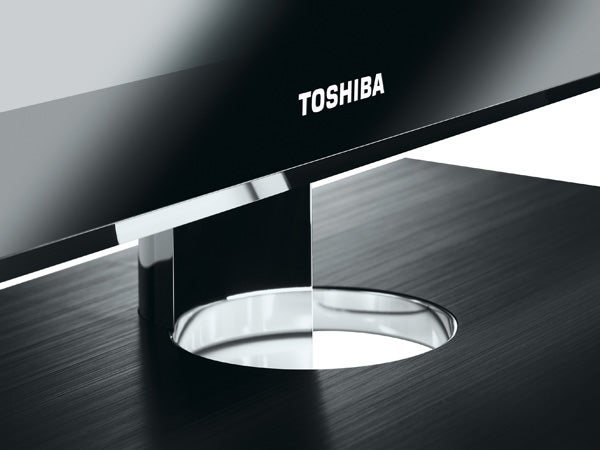 
Toshiba has managed to included a degree of colour and white balance management even on its entry level TVs, so it’s no surprise to find the 55WL768 sporting such welcome image calibration aids as 2-point or 12-point white balance adjustment; the facility to adjust the balance and tint of the RGB colour elements; and hue, saturation and brightness controls for all six of the primary video colours.


Moving on to the set’s 3D capabilities, there’s not much to say aside from the fact that the 3D transmitter is built into the screen, and you get a solitary pair of active shutter ‘RealD 3D’ glasses for free. There are no tools for adjusting the image’s depth and nor, more surprisingly, is there any 2D to 3D conversion. Not that this latter omission actually bothers us much… 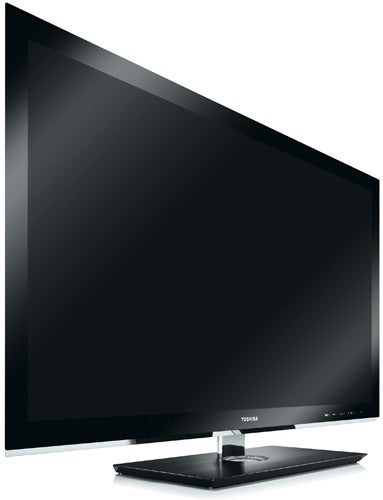 First impressions of the 55WL768 in action are startlingly promising. We started out with its Freeview HD tuner, and a number of strengths really shone out. For a start, the edge LED lighting driving the full HD LCD panel delivers exceptional brightness and punch – in stark and welcome contrast to the slightly muted look of Toshiba’s current ‘mainstream’ TVs.


Even better, excessive noise or any seriously overcooked colours do not accompany the striking dynamism of the 55WL768’s images. The palette the set displays is actually the widest and most natural we’ve seen to date from a Toshiba TV bar, perhaps, the brand’s very expensive direct LED SV685 models.


HD images via the Freeview HD tuner or Blu-rays, meanwhile, look very detailed and impressively crisp. Especially as the set is also arguably Toshiba’s best LCD TV yet when it comes to suppressing motion blur. Even standard definition pictures can look likeably sharp without suffering excessive noise thanks to the Resolution+ system (so long as you don’t go beyond its level three setting).


At their best – by which we mean fed the right sort of detailed, bright, colour-rich content – the 55WL768’s 2D images are up there with the very best the TV world has to offer. They really are.


This does not mean, though, that the 55WL768’s 3D pictures are especially good. For seemingly inevitably, they suffer with that LCD 3D problem of crosstalk noise. To be fair, we’ve seen screens that suffer worse with the tell-tale double ghosting around edges; it’s fairly faint for the most part. But on the other hand there’s much more of it than you get with any 3D plasma TVs. And whenever you see it, it’s distracting. And the more you see it, the more you can’t stop looking for it. 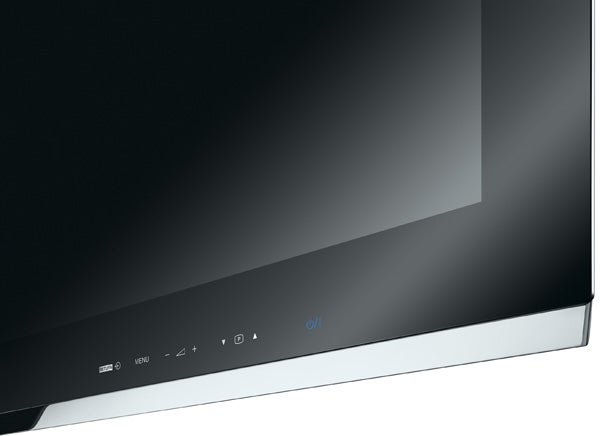 Our review sample also kept momentarily losing sync with 3D images from a Panasonic 3D Blu-ray player. But presumably this issue is just a flaw with our particular sample.


The 55WL768’s worst failing, though, applies equally to 2D and 3D, and is almost as predictable as the 3D crosstalk problems: inconsistent backlighting.


We’ve had cause to moan about patches of excess brightness with numerous edge LED TVs this year, but the problem is arguably more acute on the 55WL768 than ever before. With a predominantly black picture, such as the ‘Blu-ray’ logo screen that fires up on a Sony Blu-ray player when you first power it up, we could see no less than eight distinct patches of extra brightness. You feel like you’re watching TV through a pair of glasses with finger marks on the lenses. 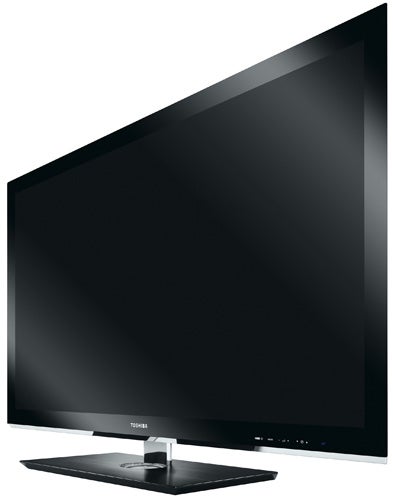 What’s more, many if not all of these distracting patches of extra brightness remain visible while watching any even slightly dark scene, such as the one where Bond snogs Demetrios’ wife in ”Casino Royale”. If you’re noticing light blotches more than you’re noticing Bond rutting with a highly attractive female, then frankly you know there’s something badly wrong!


The backlight flaws described were spotted both post-calibration and using the set’s own Hollywood preset, which reduces the backlight right down to 40 per cent. So it’s not even something you can get rid of by sacrificing brightness.


Turning finally to the 55WL768’s sound, there’s more disappointment in store. For while the set can go louder than you might expect for such a skinny model, it actually goes too loud for its own good. For all that happens at high volumes is that you notice how harsh and over-dominant trebles are, how thin the mid-range is, and how practically non-existent bass is, even with a provided Dynamic Bass Boost circuit set to high.


The good news about the 55WL768 for Toshiba is that with the right sort of material, its pictures are genuine rivals for almost anything else out there right now. So clearly, Toshiba still knows how to make a classy premium picture. It delivers a decent 3D debut too, notwithstanding the crosstalk issues.


The worry is that Toshiba is well off the pace with its multimedia support, and appears to have a pretty fundamental problem in figuring out how to build skinny edge LED TVs without messing up black level coherency. And until it figures this latter issue out, all its good work elsewhere is going to remain fatally undermined.