You don’t have to look very far to appreciate the main appeal of the Toshiba 52Z3030D. For at 52in across, it is by a good five inches the largest Toshiba LCD TV yet.


But with Toshiba’s latest LCD range proving quite bizarrely inconsistent so far, which side of the good/crud divide will this brute fall? Hopefully it will be the good, for there will be absolutely no hiding place for any crud on a screen as big as 52in…


There’s also, of course, no hiding place in the average living room for a 52in screen. So it’s just as well that Toshiba has made the 52Z3030 very easy on the eye in its high-gloss, impressively slender black bezel. 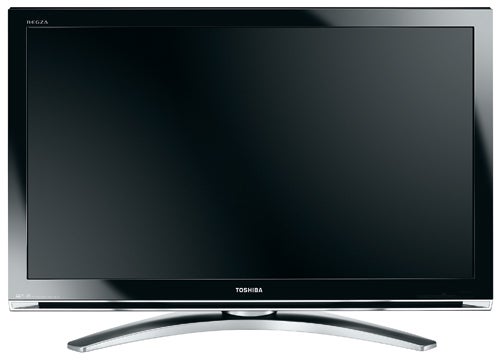 The Z part of the 52Z3030’s name denotes it to be a member of Toshiba’s current flagship LCD range. And the set goes about fulfilling its flagship duties by including a prodigious quantity of high quality connections headed up by a trio of v1.3-specified HDMIs. You can thus simultaneously connect, for instance, three of our favourite things: a Sky HD receiver, a Blu-ray player, and an Xbox 360 Elite. Marvellous.


Furthermore, the ‘v1.3′ bit of the HDMI’s spec means they’re able to receive the Deep Color format reckoned to take HD picture quality to the next level. We’d love to tell you if this claim is true, but sadly we’ve not yet received any AV sources that actually support the format! 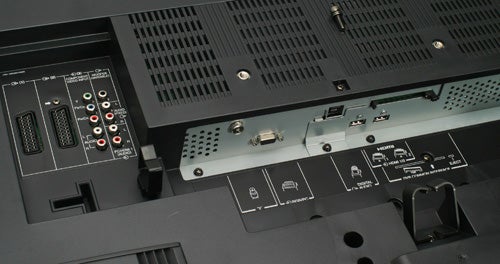 Elsewhere among the connections are a subwoofer line-out so you can easily add your own external active bass speaker if the in-built speakers don’t prove adequate; a digital audio line out; and a D-Sub PC jack. So far, so good.


Turning to the key screen specifications, the good times continue to roll with the discovery of a full HD resolution, and a startling claimed contrast ratio of 14,000:1. To put this contrast into perspective, it’s only a couple of thousand short of the contrast ratio claimed by Pioneer’s ground-breaking ‘08XD’ KURO plasma screens. Cool.


Unlike the KURO plasmas, though, the 14,000:1 contrast ratio figure is not a ‘native’ one for the panel, but rather one derived from the fact that the 52Z3030 employs a dynamic backlight system that dims the screen’s brightness during dark scenes to reduce the greyness that would otherwise afflict black parts of the picture. In other words, unlike with the KURO plasmas – or pretty much any plasmas, come to that – you’ll never get this screen’s maximum brightness and maximum black level response onscreen at the same time.

Heading up the 52Z3030D’s features is its Active Vision M100 image processing engine. The M100 part of this rather lengthy title is quite important, for it signifies that the 52Z3030D has 100Hz processing onboard.


In case you’re not clear why this matters, 100Hz is there to tackle the common LCD problem of blurred motion caused by a combination of the technology’s relatively slow response time and static backlight illumination. The idea is simply that by doubling the scanning rate of the image, there will be less ‘missing’ image frames for your eye to have to fill in – the phenomenon that leads to the blurring effect we’re talking about. 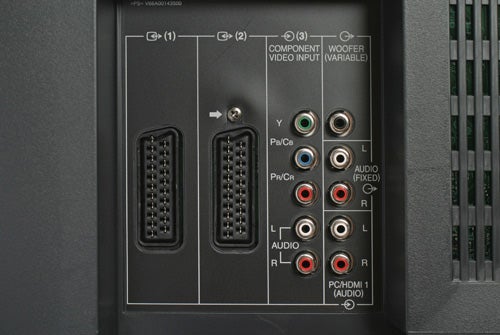 The rest of the Active Vision processing refers to Toshiba’s proprietary technology for improving colour response, contrast, sharpness and noise reduction. This is a technology which has impressed in previous LCD generations, but which strangely hasn’t saved some of Toshiba’s more recent screens from feeling decidedly average.


There are a couple more key features of the 52Z3030D we should run by you before finding out if the 52Z3030D is a hit or a miss. First, it’s got 10-bit colour processing which should, we’d hope, result in finer colour blends than you’d normally expect to find.


Second, it features a special ‘5:5 Pulldown’ mode designed specifically with 1080p/24fps playback in mind. In layman’s terms, this repeats each frame of a 1080p/24 source five times in a bid to make any movement in the image – especially camera pans – look smoother.

And so we finally settle down to see what the 52Z3030D can do. Starting out with the Blu-ray of Mel Gibson’s ”Apocalypto”, the TV gets off to a great start by portraying the opening jungle shots with some of the most extreme colour vibrancy we’ve ever seen on a flat TV. Honestly, the various greens of the foliage look so intense you almost have to squint to look at them. Excellent.


A few moments with a ”Sky News” feed is enough to confirm, too, that this extreme vibrancy is not just restricted to green; reds and blues are just as full-on, ensuring that no particular colour is allowed to dominate.


Furthermore, relatively static shots in ”Apocalypto’s” opening scenes show the 52Z3030D making full use of its full HD resolution, as the TV reproduces not just individual leaves among the foliage but also, in places, the actual textures on those leaves. God, I love high definition…

However, the 52Z3030D also suffers from one or two of the problems that have plagued various other recent Toshiba models. Probably the worst problem is the lack of black level depth, as ”Apocalypto’s” night-time scenes appear behind a gentle but sometimes definitely distracting grey veil. So much for that 14,000:1 contrast ratio claim! 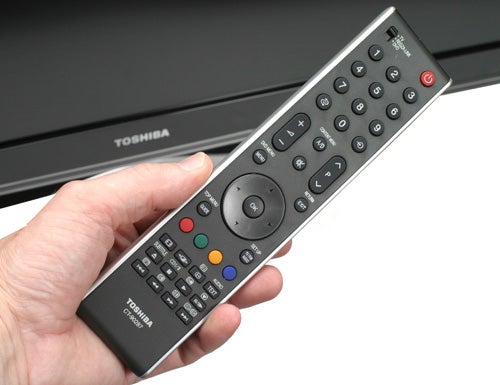 It doesn’t help the black level situation, either, that contrast and colour saturations drop off markedly if you watch the screen from an angle greater than 30 degrees.


A more surprising problem given the presence of 100Hz processing is the way moving objects tend to look rather smeared as they cross the screen. Interestingly, the only time I felt consistently untroubled by this issue was while watching 1080p/24p stuff – possibly because of the 5:5 pulldown processing that kicks in with such source material. 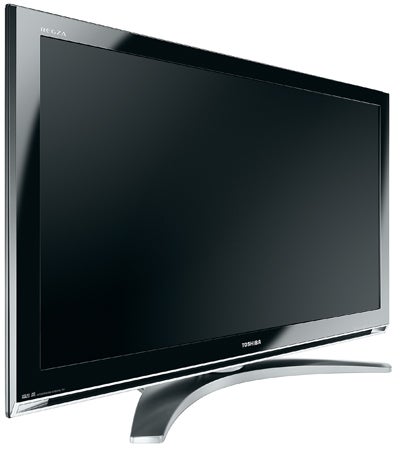 Also slightly troubling are some of the TV’s colour tones during dark scenes, and some pretty uninspiring upscaling of standard definition sources that leaves them looking rather noisy and over-processed.


While the picture might have its problems, though, the 52Z3030D’s sound is consistently excellent. That subwoofer line output we mentioned earlier doesn’t seem likely to get much use given how much bass the onboard speakers can put out. Yet these impressive quantities of bass don’t for a moment crowd out what’s actually a very open, expressive mid-range, or trebles that really add detail and ‘sparkle’ to the soundstage.


Toshiba’s recent inconsistent run of form with LCD TVs is here encapsulated within a single TV, as some really striking strengths are undermined at almost every turn by some disappointing weaknesses. Here’s hoping the brand really puts the majority of our concerns to bed with its next – and imminent – LCD range.