Whatever else we might end up saying about the 52XV555DB, one thing we can say with absolute certainty right away is that it’s remarkably affordable. Not so long ago an LCD TV bigger than 40-42in would have set you back an arm and a leg, yet here’s a 52in LCD TV – with a Full HD resolution to boot – that can be yours for comfortably under £1,000. Crazy. But in a good way.


Obviously any 50in-plus TV will make a pretty dramatic impact on any room it appears in. But there’s something especially imposing about the 52XV555DB, thanks to the groovy slight convex curve in the set’s highly-glossed black bezel, a neat silver trim around its outside, and finally the bold, almost toy-like lines of its desktop stand. Somehow it manages to look fun and serious all at the same time.


It’s adequately connected for its money too, with three HDMIs (two on the back, one down the side) standing out, as well as a D-Sub PC port, and an optical audio output for shipping digital audio feeds from the built-in Freeview tuner. Obviously in an ideal world a fourth HDMI and some kind of multimedia port (USB, SD slot) would have been appreciated, but I guess something has had to go to hit the £975 price. 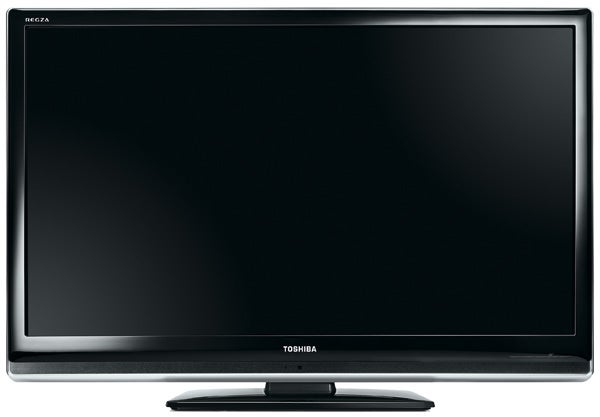 The XV part of its name reveals the 52XV555DB to be from the lower-middle section of Toshiba’s current range. Which means that it doesn’t have 100Hz processing, or the impressive Resolution+ standard def-boosting technology found on the brand’s new ZV series.


It does, though, have Active Vision LCD, Toshiba’s generally affable if hardly inspirational video processing engine. Impressive for the 52XV555DB’s money, too, is a colour management system that lets you adjust hue, saturation and brightness levels of the red, green, blue, yellow, magenta and cyan picture elements rather than merely tweaking them automatically, as usually happens with colour management tools on budget TVs.


The only other two features of the 52XV555DB worth a mention are a 24fps mode for enhanced Blu-ray playback, and a respectable – though hardly world-beating – claimed dynamic contrast ratio of 30,000:1.


As I start reviewing the set’s performance, I can’t help but be concerned about how its standard definition pictures will hold up. After all, aside from its Resolution+ TVs, Toshiba has struggled slightly to deliver really likeable standard definition pictures with its recent LCD TVs. And any similar weaknesses on the 52XV555DB will surely only be exaggerated by the sheer enormity of its screen.

My fears are realised to some extent by the amount of noise that buzzes around standard definition pictures from the digital tuner. The rescaling system for converting standard def sources to HD ones just doesn’t seem as canny at dealing with source noise as the processing engines of some rival TVs, tending to exaggerate noise during the rescaling process rather than reducing it.


As you’d expect, the TV’s noise reduction options can help a little – especially the MPEG NR system. But this also tends to make the picture look rather softer than I’d like – especially if you’re also using the set’s Mild or Movie presets.


On the upside, provided you don’t use the NR tools, the 52XV555DB’s standard definition pictures actually look a bit sharper and crisper than I’d expected, especially if you use a slightly toned down version of the Standard image preset. This preset also delivers plenty of brightness, avoiding the slightly dull look of some budget TVs, and colours that are vibrant. 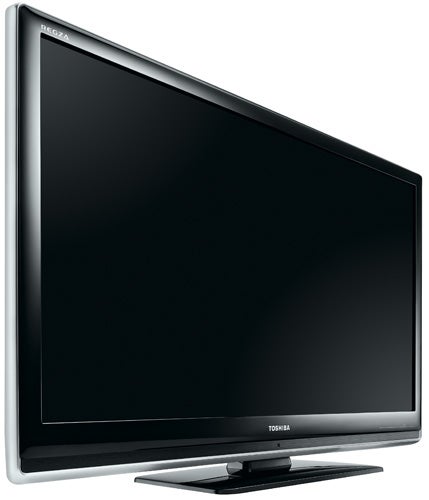 However, I’d also say that, as noted with some previous Toshiba TVs, standard definition colours occasionally look rather unnatural in tone, especially where skin is concerned. Skin also exhibits that slightly waxy look that tends to accompany processing engines not particularly adept at interpolating new details during the rescaling process.


Overall, I’d say that the 52XV555DB’s standard definition pictures aren’t as rough and ready as expected, but also aren’t up there with what you might expect to see from the Philips, Sonys or Panasonics of this world.


Turning to HD – an area Toshiba sets are generally much more comfortable with – the news is mostly very good. Starting out in particularly tricky fashion with Dead Space on the Xbox 360, I was pleasantly surprised right away by the picture’s dynamism. In other words, some really crisp and bright peak whites sit side by side with what could be the deepest, most natural black levels I’ve seen from a Toshiba TV to date.

This ability to produce good black levels is absolutely essential to making ”Dead Space” ‘work’. For if the TV suffered so much with LCD’s common greyness issue that you couldn’t see into the game’s darkest corners, then that key feeling of dread as you scour the cramped environment for hostile activity would be hugely diminished.


In fact, with this in mind, it’s not just the 52XV555DB’s lack of grey mist interference that impresses. For it’s also noticeable that dark areas don’t look hollow and empty, thanks to the set’s ability to produce a respectable level of shadow detail.


I was relieved, too, to find my connection with the dark ”Dead Space” pictures not being broken by much in the way of screen reflection from my surroundings. And as a side note to the black level discussion, I was pleasantly surprised by how well the image’s contrast and colour held up while watching the picture from an angle, contrary to my experience with smaller Toshiba sets.

Turning to a favourite Blu-ray or two, it’s immediately noticeable how intensely sharp and detailed HD pictures look. Surfaces and faces appear with a level of texture and detail that’s phenomenal, given the 52XV555DB’s price. In fact, the detail levels are so acute, especially using the set’s pixel-for-pixel Exact Scan mode, that if you’ve not experienced big-screen HD before, you’ll probably find that it’s a day or two before you can actually watch a film properly rather than just ogling all the extraordinary minutiae the picture contains.


I was very pleased to note, too, that despite the lack of any major motion processing, the 52XV555DB handles fast action sequences well. During HD films there’s no severe smearing and only a little of LCD’s common blurring problem.


Panning around in ”Dead Space” is a little less successful, as the picture smudges momentarily before settling down again once I’ve settled on a route to run. But this sort of fast panning round is a tough test for any TV, and the 52XV555DB doesn’t handle it badly at all compared with many other affordable TVs. 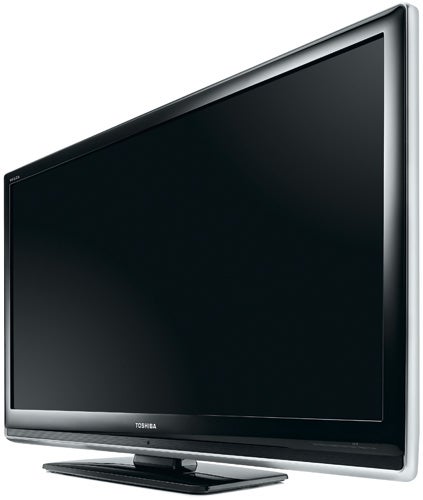 HD images fare markedly better than standard def ones with their colours, too. Tones are generally more credible and expressive, with skin tones in particular looking a million times more believable – not least because of the massively superior subtlety on show when it comes to reproducing the fine colour blends that help give a face shape and three-dimensionality.


I do still have a couple of issues with the set’s HD video playback, though. First, that generally exceptional sharpness I mentioned earlier can occasionally be accompanied by a slightly gritty look. Using the provided Movie preset can improve this problem considerably, but many will also find this mode’s general tone a little too muted and dull, requiring time twiddling with picture settings to arrive at a picture that treads the right noise/dynamism balance.


My second concern is that despite carrying a dedicated 1080/24p mode, Blu-ray pictures are by no means impervious to judder – a problem which can give the picture the impression of lost resolution at times, too. That said, the judder is not significantly worse than we see on the majority of rival flat TVs, especially at the affordable end of the market.


The 52XV555DB’s audio, meanwhile, tries hard, but ultimately doesn’t have the core power and frequency range to really deliver the goods. Which effectively means that while dialogue sounds fine, the soundstage soon becomes thick and indistinct when pushed by an action sequence – though the TV’s ‘Focus’ and ‘TruBass’ audio processing features ensure that things never become truly disastrous.


If you’re after a big-screen all-rounder at an aggressive price, it’s impossible to ignore the fact that Panasonic’s 50in TX-P50X10 plasma screen can now also be had for under £1,000. But if you’re in the market for an affordable big TV to do duties predominantly as a movie or game monitor, then the 52XV555DB’s exceptional sharpness with HD also make it impossible to ignore.