If you read my report on Toshiba’s 2007 product line up a couple of weeks back you’ll be well aware that the company is throwing all its weight behind LCD high definition TVs this year. Whereas last year Toshiba launched two new lines – the WLT66 and WLT68 – this year it has four new lines to shout about. There’s the top of the line Z series which it due in September, the cutting edge Picture Frame X series and standard X series due in the summer, and the entry level C series, which is available right now. 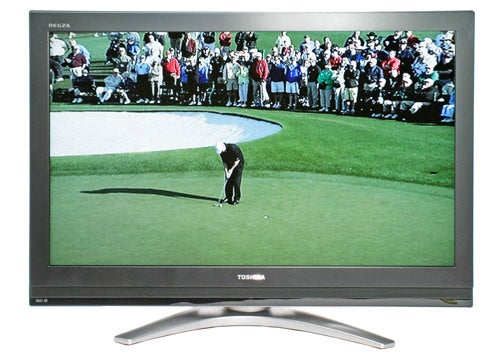 The 42in 42C3030D sits at the very top of the C series range, with 37, 32 and 26in variants below it, but despite sitting at the top of the C series tree, this is still a very affordable TV. You certainly wouldn’t guess that the C series represents Toshiba’s entry level by looking at this TV – the 42C3030D looks just as sleek and stylish as many TVs costing twice the price. The matt black bezel is the giveaway though, with the step-up X series and flagship Z series both sporting piano black, glossy bezels. The overall effect is still pleasing though, with the slim speakers mounted unobtrusively below the screen.


Another improvement is the stand. The old WLT66 range incorporated a fixed stand, while the C series uses the same crescent shaped stand that was first seen on the 32WLT68 last year. Not only does this stand complement the aesthetics of the TV, but it also allows the screen to be easily panned from side to side. Also, unlike many other large, flat screen TVs, the stand comes attached to the screen, thus saving the end user the job of assembling a separate stand and then trying to attach the TV to it. 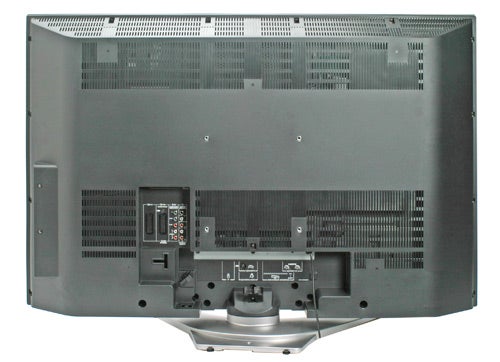 If you were hoping that the 42in C series would boast a 1,920 x 1,080 panel like the {linkout42WLT66 before it, I’m afraid you’re in for a disappointment. Despite the fact that both the X and Z series have Full HD panels, the humble C series has to make do with a native resolution of 1,366 x 768. To be fair though, Toshiba isn’t pitching the C series at the high end consumer who craves a Full HD 1080p panel, instead aiming this TV at the consumer who is ready to take the first step on the big screen, high definition road. That said, the 42C3030D will still happily accept a 1080p signal and display it, but of course it doesn’t have enough pixels to display the image 1:1.

There’s a decent amount of connection options on offer, although the C series entry level status is reflected by the lack of HDMI 1.3 support, with the two HDMI ports conforming to the older 1.2 standard. The result is that you’re not going to be able to take advantage of the Deep Colour feature that an HDMI 1.3 equipped TV could – assuming that you have a source device that’s also HDMI 1.3 capable and have compatible software of course. It’s fair to say that anyone who’s interested in Deep Colour and the other advantages that go along with HDMI 1.3 won’t be looking at a TV like the 42C3030D though. 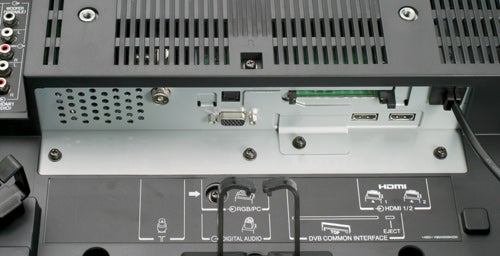 As well as the aforementioned twin HDMI ports, you also get component video input, twin Scarts (one RGB), a D-SUB port for PC connection, S-Video, composite video and an RF aerial socket. There’s also a fair amount of outputs at the rear. There’s both analogue and optical digital audio out – the latter for streaming Dolby Digital from Freeview channels, if that service ever becomes available. There’s also a dedicated subwoofer output so that you can add a bit of low frequency oomph to your sound. The final connection at the rear is a CI slot for adding subscription TV packages to the integrated digital tuner. Unusually the 42C3030D has a captive power cable rather than a power socket, although previous Toshiba sets have employed the same system.


The 42C3030D has both analogue and digital tuners inside, although I’ve never really been sure why you’d choose to watch an analogue tuner when you have a digital one on hand. That said, the picture quality from the analogue tuner was surprisingly good on this TV, so if you were mad enough to want to make use of it, you won’t be disappointed. Auto tuning of both tuners was simple and painless, while the process of ordering your analogue channels is intuitive enough for even the most non-technical user to get to grips with. 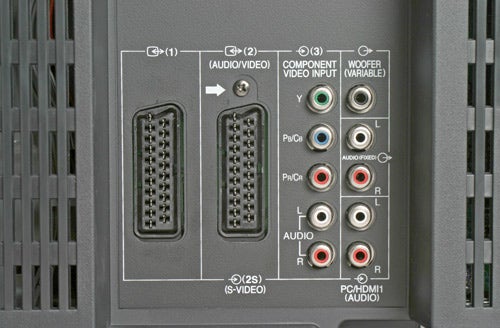 Toshiba’s Active Vision LCD picture processing is present, although the impressive Active Vision M100 100Hz processing is reserved for the flagship Z series models. What you do get is dynamic backlight control, which will tailor the intensity of the backlight to the scene being viewed. This means that if you’re watching a dark scene, the backlight will be dialled back in an effort to improve black levels – this should hopefully eliminate the “grey” effect that has traditionally plagued LCD TVs. There’s also MPEG noise reduction and digital noise reduction on offer, which can be activated in varying degrees.

There’s a surprising amount of colour adjustment for an entry level TV. You can set the colour temperature, although there are no Kelvin settings to choose from, only Normal, Cool and Warm – I imagine that these will correspond to around 6500k, 9300k and 5400k respectively. There’s also a 3D Colour Management setting – with this activated you have access to the Base Colour Adjustment. In the Base Colour Adjustment menu you can tweak the hue, saturation and brightness of each individual colour in both the RGB and CMY spaces. For the real AV enthusiast this level of adjustment is a huge bonus and allows for setting the TV up for each specific source. Unfortunately you can’t create profiles, which means that you would have to manually adjust each colour every time you switched between sources! Ideally you should be able to setup three or four profiles, or at least apply a different profile to each input. 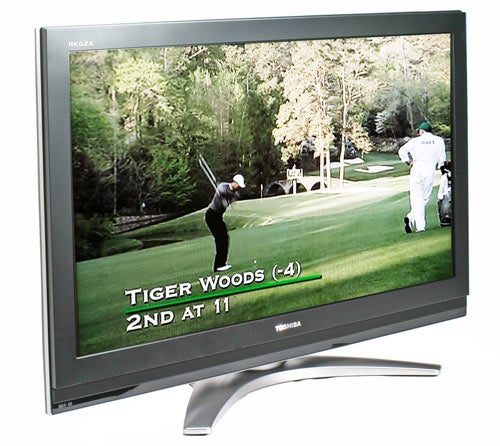 When it comes to picture quality the 42C3030D is a bit of a mixed bag. Now, it’s at this point that I often talk about how a TV is great with high definition sources but far less impressive when presented with poor standard definition signals, but this Toshiba exhibited the opposite behaviour. That might be a slightly simplistic view, but there’s no denying that the 42C3030D is slightly disappointing when hooked up to HD sources and surprisingly impressive when displaying SD content! 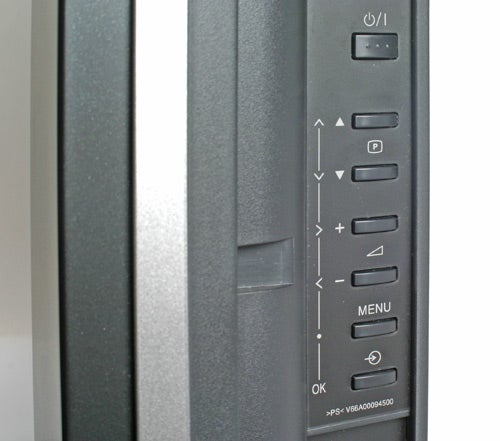 To test this TV’s HD credentials I connected it to the excellent Toshiba HD-XE1 HD DVD player. Considering that you couldn’t ask for a better source device right now, the resulting pictures produced by the 42C3030D proved to be something of a letdown. The biggest culprit is the poor black level, where low light areas and dark scenes have a distinct grey look. This means that films like V for Vendetta lose all their dark menace, and if you crank down the brightness to create some semblance of black you end up losing all the detail in dark areas. Even when watching brighter source material like Superman Returns there seemed to be a lack of contrast evident. In fact it’s fair to say that the 42C3030D only managed to look its absolute best in a dark room, where the colours became that bit more vivid and rich.

In contrast this TV gave a far better account of itself when faced with high definition gaming duties. OK, so Gears of War still suffered from the poor black levels and suspect contrast, but firing up EA’s latest UEFA Champions League game on the Xbox 360 produced a suitably vivid picture, with lush green pitches and bright colourful team kits. The 423030D did an equally impressive job with Sega’s superb Virtua Tennis 3, while there was also little in the way of motion smearing no matter how fast the action, although steady pans weren’t completely unaffected. 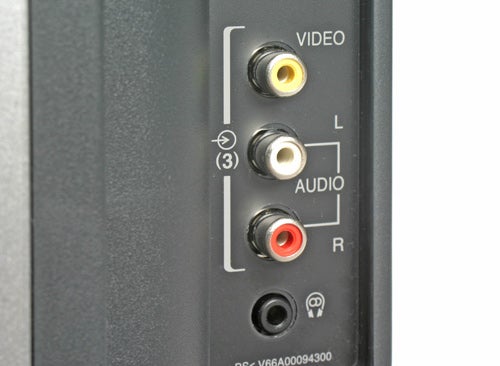 When it came to SD content from its built-in tuners, the 42C3030D did a sterling job. Not only were the results form the analogue tuner far better than expected, but the Freeview tuner also produced a surprisingly noise free picture. Of course this is testament to Toshiba’s picture processing, rather than a sudden increase in Freeview quality. The panel didn’t seem to be struggling quite so much with black levels either. The 42C3030D definitely makes a good case for itself for anyone looking to buy a new TV, but who will be using standard definition sources for the foreseeable future.


Sound is surprisingly good considering the insubstantial looking speaker bar, and the SRS WOW 3D sound works very well, despite the fact that I’ve found that it degrades sound in some other TVs I’ve looked at.


It’s good to see that Toshiba has improved its remote control since the last generation of TVs too. It’s still no work of art by any stretch of the imagination, but it’s far more comfortable in the hand than the previous generation unit, while the buttons also have a more definite feel to them when pressed. Navigating the Freeview EPG is also very quick and responsive, unlike the 42WLT66 that I reviewed last year. 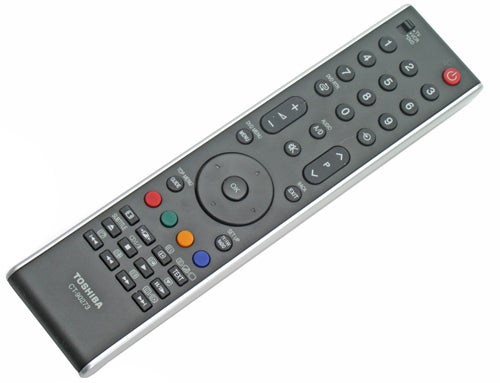 But the biggest plus point for the 42C3030D is the price, and with this TV already available on the street for under £800, it really does look like a bargain.


At £799 you really are getting a lot of TV for your money with the 42C3030D. OK, so the image quality isn’t quite up to Toshiba’s usual high standard, and the panel resolution and HDMI ports aren’t cutting edge, but if you’re looking to take your first step on the HDTV ladder, this 42in Tosh is definitely worth a look.