As with the vast majority of Toshiba’s current LCD range, the 42AV635DB wears its heart right out there on its sleeve. Where ‘sleeve’ really means ‘price tag’. For its core appeal is quite simply its provision of a 42in screen for under – substantially under – £500.

Remarkably the 42AV635DB’s £480 price tag doesn’t make it far and away the cheapest 42in TV around though; as we’ll cover later, there are a number of rival screens hovering around for only a few quid more. But of course, if this Toshiba has enough performance and/or feature appeal to stand out from the budget pack, it still has every chance of ending up a serious bargain. 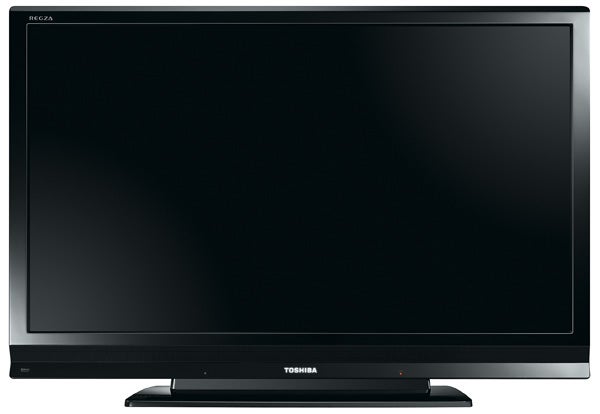 As I’ve noted with reviews of other Toshiba TVs of late, the 42AV635DB’s design does a respectable job of hiding its extreme cheapness – at least from a distance. In other words, while the black frame is glossy and slim enough to look like it should be wrapped round a much more costly TV, once you get up close and personal the finish looks – and feels – a bit on the plasticky side.

A close investigation of the 42AV635DB’s connections, however, again reveals little if anything that might give away the set’s wallet-friendly nature. There are four HDMIs, for instance, when some sets costing hundreds of pounds more only offer three. Plus there’s a dedicated PC port, and a USB jack that can play JPEG photos straight through on to the screen. There’s no support for video or music files via USB, but this can be found further up the Toshiba range, and the JPEG ‘limitation’ is more than acceptable for the 42AV635DB’s money.

Unlike the merely HD Ready 37AV635D, meanwhile, the 42AV635DB enjoys a Full HD resolution – something not found on at least some of the competition I mentioned in passing earlier. Panasonic’s X10 plasma series, for instance, is only HD Ready. 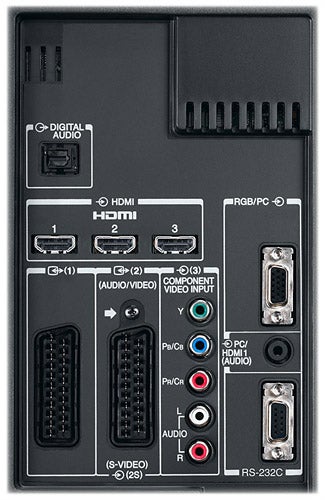 Considering that the 42AV635DB marks Toshiba’s entry-level 42in TV, it’s quite surprising to find it still carrying a reasonably potent suite of video processing. This doesn’t run to 100Hz, naturally, but Toshiba’s twin Resolution+ and Active Vision II have both survived the cost cutting process.

Resolution+, as regular readers will now hopefully be aware, is an unusually potent (for this low in the market) system for upscaling standard definition to fill an HD resolution screen. Active Vision II is rather less interesting so far as I’m concerned, as it’s really just Toshiba’s name for the sort of mostly unremarkable general purpose video boosting engine found in some form or other on almost any TV these days.

The amount of processing going on in the 42AV635DB is sufficient, in fact, to justify the set’s retention of Toshiba’s little Control Visualisation trick, whereby you can monitor the weight and type of the processing being applied via a couple of continually updating graphs.

Neither of these graphs gets much of an explanation in the instruction manual, mind you, limiting their usefulness. But there’s still something strangely reassuring about sitting there watching a TV as cheap as the 42AV635DB clearly doing something processing-wise to the picture on a continual basis. It kind of makes you feel like you’re getting more bang for your buck!

The 42AV635DB is surprisingly flexible with its picture setup for such a bargain-bucket TV too. On the ‘automatic’ side of things, there’s an optional tool that combines simultaneous analysis of the ambient light level and the picture content to arrive at what the processing believes is the optimum picture settings. Ambient light functions on other TVs tend to work in isolation, without also taking into account the content of the image.

I was also pleasantly surprised to find my HD Video Essentials Blu-ray set-up disc getting more use than expected courtesy of a passably flexible and useful colour management system. This lets you manipulate the hue, saturation and gain for the six main colour constituents of a video picture. 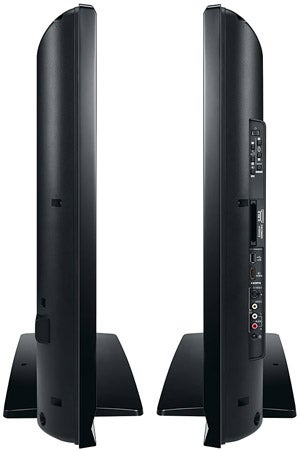 Other pleasing set up discoveries are a static gamma adjustment, a sliding bar to select the balance between the black and white extremes of the colour palette, and the facility to set the starting point for the TV’s auto backlight adjustment feature. You can even set the screen to show just its blue, green or red colours – the sort of calibration aid we’d only expect to find on a relatively high-end TV with ISF accreditation, not some supposedly cheap and cheerful budget model.

Perhaps inevitably with such a cheap TV, though, despite all of its calibration tools the 42AV635DB only delivers a decent rather than amazing picture performance, for the simple reason that it’s unable to rise above a couple of classic LCD problems.

The most instantly obvious of these can be seen when watching dark scenes, as the set fails to hit the black level heights – or rather, depths – we’re starting to see from one or two rival sets, even down at the 42AV635DB’s sort of price level. 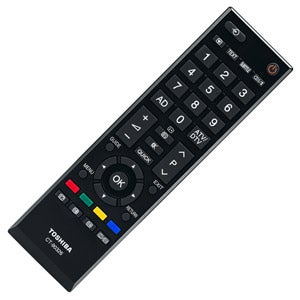 This is particularly true with most of the set’s preset picture modes, but even after sliding the backlight output right down – leaving the image very low on brightness by LCD TV standards – and emphasising black in the provided black/white balance bar, there was still definite greyness to be seen.

Models I’m thinking of that better the Toshiba in the black level department without costing substantially more would be Samsung’s LE40B550, and Panasonic’s plasma-based P42X10. It looks as if the 42AV635DB’s rather uninspiring 15,000:1 quoted contrast ratio (actually less than that quoted for the 37AV635) lives down to expectations. Though I should also say that the 42AV635 is actually rather better in the black level department than the efforts of the specialist budget brands.

My response to the 42AV635DB’s black levels isn’t improved by the screen’s rather limited viewing angle before contrast reduces badly, and the appearance of some backlight inconsistency, particularly – on our review sample – in the bottom left hand corner.

It commonly follows that a TV with contrast issues also has a few colour issues, and so it proves with the 42AV635DB. Some reds and greens just look a bit dingy – for want of a more scientific term! – during dark scenes, especially when you’re watching standard definition.

Thankfully – and as we’d expect given Toshiba’s generally credible budget form of late – the 42AV635DB has some impressive plus points as well as its couple of problems mentioned previously. It reproduces moving objects surprisingly well, for instance, with only a very acceptable degree of resolution loss and smearing. In other words, the lack of 100Hz processing ended up bothering me less than expected. 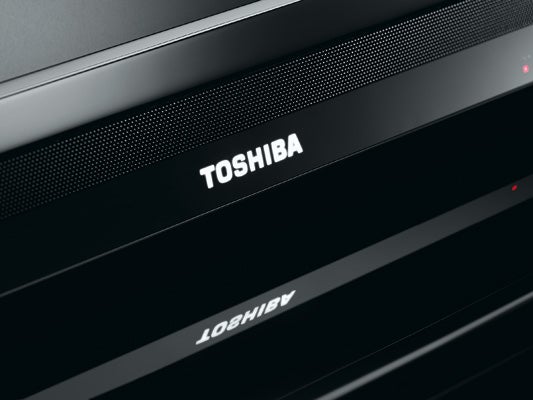 Colours during bright scenes, meanwhile, re-inject a decent amount of the dynamism that can go AWOL during dark scenes, and perhaps best of all, the 42AV635DB’s pictures are very crisp and sharp.

With HD this means that you can clearly see the smallest of textures – including film grain – in good Blu-ray transfers. But the 42AV635DB can also produce standard definition pictures that look startlingly sharp by budget TV standards. Just make sure you don’t set the Resolution+ processing higher than its two or three level, to avoid noise setting in, while also taking care to only use the set’s noise reduction circuitry at its lowest setting, or maybe not at all. 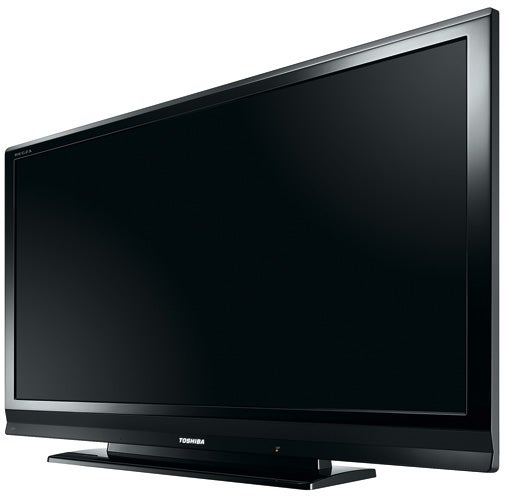 As with almost all budget TVs, the 42AV635DB’s audio is pretty average. On the upside, vocals are reasonably open, clean and authentic, and unlike some budget rivals, its speakers don’t distort except under the most extreme provocation.

However, there’s precious little bass in evidence during your typical explosion or gunfire sequence, trebles aren’t quite as clear as they could be, and the soundstage tends to be ‘one note’, not shifting up any gears when impolitely ordered to by an aggressive action sequence.

If considered against the efforts of dedicated budget brands like Goodmans, Bush, Hannspree and Technika, Toshiba’s 42AV635DB looks like a great deal, worth every pound – and then some – of its £480 price. The only catch is that time has recently eroded the prices of superior sets from Panasonic (the P42X10) and especially Samsung (the LE40B550), leaving the 42AV635DB looking merely worthy of audition rather than a full-on recommendation.