Back in April I attended Toshiba’s 2007 product showcase and got my paws on all the upcoming products. At this event Toshiba showed off one TV that was so new, there wasn’t even a working model on display, instead there was a mock-up on show, that I wasn’t even allowed to publish a picture of. That TV was the Regza 40XF355D and now I have the full retail unit in front of me.


The thing that makes the XF series so special is the ludicrously slim bezel that surrounds the screen, and you really do have to see this TV in the flesh to understand the impact that this design has. To put it in simple terms, this 40in TV actually takes up less physical space than most 37in units. For example, the 37in Panasonic TX-37LZD70 that I looked at recently is 1,031mm wide, while the 40XF355D is only 934mm wide, despite offering three inches more diagonal viewable area! 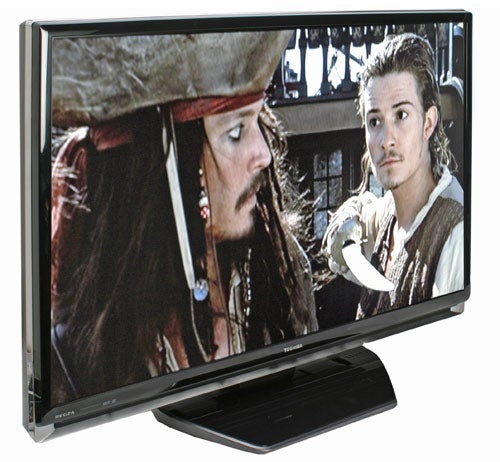 Also in the 40XF355D’s favour is the fact that it looks absolutely stunning. That ultra-slim bezel (23mm to be precise) is finished in glossy black, while the speakers are mounted below the screen in a recessed enclosure, like the Toshiba 42Z3030D that I looked at last month. Toshiba has also ditched its crescent shaped stand for the XF, instead reverting to the smaller central stand last seen on the Regza 42-WLT66 – a decision that works well, especially since the stand is also finished in glossy black.


The 40XF355D isn’t just a pretty face either, it’s very well endowed when it comes to connection options too. You get a generous three HDMI 1.3 ports, so you’ve got support for Deep Colour, despite the fact that the wait for compliant software continues. There’s also a component input for analogue HD sources, along with two SCART sockets and a D-SUB PC input. At the side of the TV are both S-Video and composite inputs, with corresponding stereo audio input. The third HDMI is also located on the side, making it a handy option for anyone with an HD camcorder. 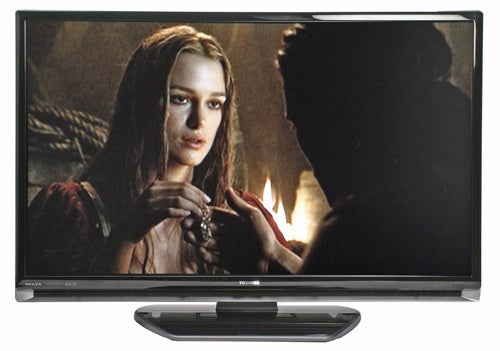 If you’re in the habit of watching TV late at night while the rest of the house is asleep you’ll be happy to see a headphone socket in evidence. It’s also good to see an optical digital audio output, so you can pass through a digital bit stream from an HDMI source to an external surround sound processor. There’s also an output for an external subwoofer to add a bit more bass to your movie watching experience.

The 40XF355D is a Full HD TV with a 1,920 x 1,080 panel that accepts 1080p signals in 24, 50 and 60Hz flavours. It’s also good to see Toshiba’s Exact Scan mode in evidence, which offers 1:1 pixel mapping when viewing 1080 sources. Toshiba quotes a 10000:1 contrast ratio, but as with most LCD TVs, this refers to dynamic contrast, where the backlight automatically dims down during dark scenes. Toshiba also claims a brightness level of 500cd/m2, which is par for the course with the current crop of LCD TVs. 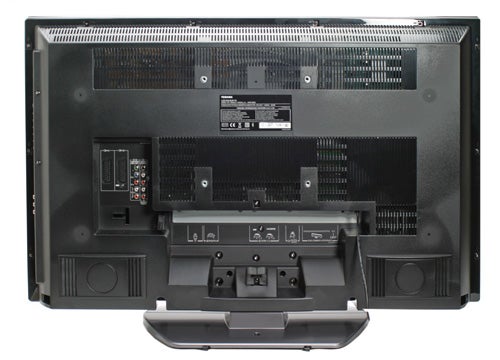 Toshiba’s Active Vision picture processing engine makes an appearance, but the 100Hz version is conspicuous by its absence. Active Vision M100 is currently only available in the top of the range Z series, like the 42Z3030D that I reviewed recently. This is a shame, because there are bound to be buyers out there who want the slim design of the XF series coupled with the full feature set of the Z series. Thankfully Toshiba has realised this, and I have been told that Active Vision M100 will be making an appearance on the XF series next year.


So, Toshiba has the aesthetic design nailed with the 40XF355D, but can the pictures make as big an impression? The short answer is, not quite. That’s not to say that there’s much that’s intrinsically wrong with the images that this TV throws up, but they’re by no means perfect.

The biggest problem with this TV is black levels, which never quite manage to look convincingly black. The superb Blade Runner: The Final Cut on HD DVD really hammered this point home, since the whole film is pretty much as dark as it gets. Somehow the constant night in Ridley Scott’s masterpiece looks more like constant dusk, which consequently means that it’s harder to pick out detail than it should be. It’s not all bad news though, the innumerable neon billboards look frighteningly vivid, and the level of detail resolution that this Toshiba achieves is very impressive – the rain drops while Deckard shelters in the street and the wisps of smoke surrounding Bryant’s face are two standout examples.

The 40XF355D’s penchant for bright colours is even more evident when playing games, with the band animations really setting the scene in Guitar Hero III on the Xbox 360. Mass Effect looked similarly impressive, with its ground breaking character models rendered beautifully and the colourful landscapes looking rich and vibrant. But despite this impressive handling of colours, the overall picture has an oddly dull look to it. Switching to the Dynamic picture mode definitely brightens things up, but then everything just looks unnatural and plastic.

The good news is that despite the lack of 100Hz processing, the 40XF355D isn’t plagued by motion smearing. OK, so there is a distinct loss of resolution when objects move across the screen, but it’s no worse than the majority of current LCD TVs on the market. 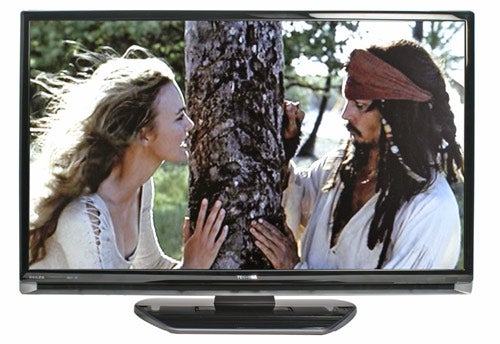 As you’d expect, the 40XF355D sports both digital and analogue tuners, although you’re unlikely to use the latter. There’s also a CI slot so you can add subscription services like Setanta Sports, although you’ll probably want to be watching your footie in HD if you buy this screen. Like all the recent Toshiba LCD TVs I’ve looked at, the 40XF355D does a good job of scaling standard definition images, even from low bit rate Freeview channels. There’s very good handling of compression artefacts and pictures look generally smooth and noise free.


Unfortunately, the slightly dull overall look remains when watching standard definition content. If you’ve got the patience to manually tweak this TV you can produce a brighter picture that doesn’t make everyone look ill, but it’s a tricky balance to achieve. To be fair, the standard Movie setting works well enough as long as the room is dark, but with an LCD you shouldn’t have to dim the lights too much to get the best results. 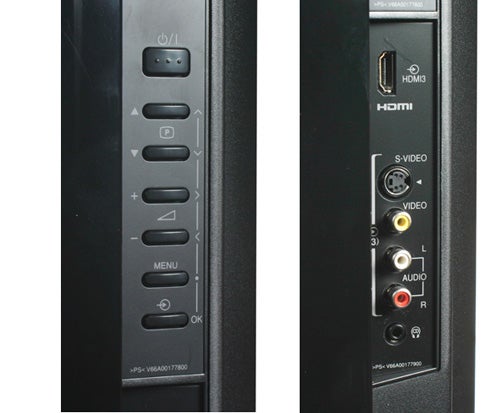 The speakers on 40XF355D are mounted below the screen in a chrome surrounded recess – design wise this looks great, just like the rest of the TV, but unfortunately the resulting sound isn’t quite as attractive. Despite sporting the same Onkyo sound system as other Regza TVs, the sound stage on the 40XF355D is worryingly narrow, while action scenes lose all sense of drama. The obvious answer is to make use of the subwoofer output, but I can’t help but think that the kind of buyer who wants a space saving TV isn’t going to want a big subwoofer in their living room.


When it comes to price it’s clear that Toshiba feels that the 40XF355D is a premium product in its range and should therefore carry a premium price, which is understandable. However, with a street price of around £1,140, it’s actually more expensive than the 42in Z series model that sits at the top of the range. Add to this the fact that the 42in Toshiba 42X3030D TV can be had for under £800, and the XF series really does start to look pricey. 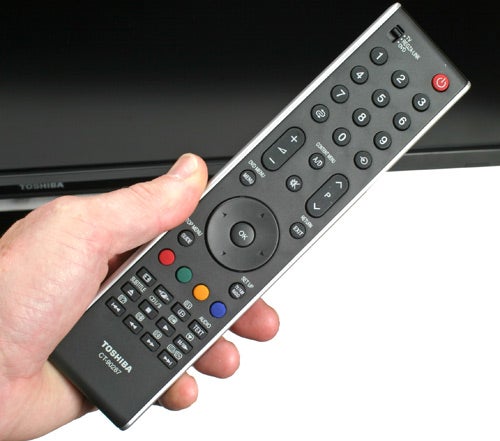 Ultimately though, the XF series is a targeted product. Toshiba has created a TV with a viewable screen size that belies its physical dimensions, and if you want to squeeze the largest possible screen into a limited space the 40XF355D is definitely worth considering.


Toshiba should be congratulated for creating a TV with such small physical dimensions relative to the viewable screen. For anyone who thought that they could only fit a 37in or smaller TV into their living room, the 40XF355D is a compelling proposition. However, if you can accommodate a 42in TV, you could buy the superior 42Z3030D for a little less, or the 42X3030D for considerably less.