While it’s Toshiba’s new ‘ZV555′ LCD TVs that are getting all the headlines right now thanks to their generally impressive Resolution+ image processing, they’re certainly not the only potentially appealing TVs in Toshiba’s latest LCD range. The RV555 series, as modelled today by the 37in 37RV555D, also looks to offer an eye-catching combination of aggressive pricing and decent specification.


Heading up that specification is Toshiba’s Active Vision M100 picture processing. This is significant for two reasons. First, the Active Vision part tells us that the 37RV555D sports Toshiba’s proprietary multi-purpose image processing engine, which turns its hand to improving everything from colour tones to sharpness levels. The M100 part, meanwhile, shows that the TV carries 100Hz processing, which regular readers will know doubles the usual 50Hz PAL refresh rate in a bid to reduce the impact of LCD’s motion blurring tendencies.


Both of these processing tricks, especially the 100Hz, are nice findings on such an affordable 37in TV. There’s no 100Hz, don’t forget, on Sony’s recently reviewed 37in rival, the still rather good KDL-37V4000. 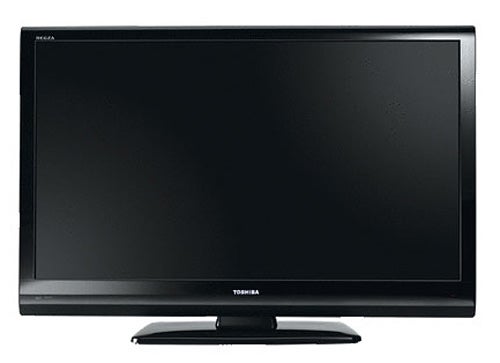 The 37RV555D scores another notable coup over the 37V4000 by being compatible with Blu-ray’s 1080p/24 format, via a 5:5 pulldown ‘translation’. Though of course, this is not enough in itself to guarantee a great Blu-ray performance. It’s just a good start.


Yet another on-paper advantage for the 37RV555D over its Sony rival is its native resolution. For it boasts a Full HD 1,920 x 1,080 pixels versus the mere HD Ready 1,366 x 768 of the Sony. And it’s looking pretty promising on the contrast front too, if a good-looking 18,000:1 claimed contrast ratio turns out to be in any way realistic.


Aesthetically, the 37RV555D is decent enough; its glossy finish and slender bezel ensure it certainly doesn’t look like a clunker, at any rate. Though it’s notable that its rather uninspiring rectangular desktop stand isn’t as glam as the ‘boomerang’ effort sported by the costlier ZV555 models.


The 37RV555D’s connections include a perfectly respectable three HDMIs, a D-Sub PC terminal, component video inputs, a digital audio line-out, and one of those subwoofer line-outs that’s currently unique to Toshiba.


My first real problem with the 37RV555D occurs when I start trawling through its onscreen menus. For starters they’re far too small, being difficult to read from any sort of viewing distance, and also a touch long-winded to wander around.


Shame, then, that you might be tempted to use them quite regularly by the decent selection of features they contain. Heading these up is some surprisingly sophisticated colour management, via which you can adjust the hue, saturation and brightness of the red, green, blue, yellow, magenta and cyan colour components.

I also appreciated the way the TV allows you to deactivate pretty much all of its various video processing elements if you don’t like the way they’re reacting with a particular source. And so a film stabiliser, the 100Hz system, MPEG and standard noise reduction routines, automatic contrast calculation, and even the dynamic backlight system (which the TV uses to boost its black level performance by reducing the output of its backlight) can all be deactivated at will.


A set of picture presets is provided, too, for people not confident enough to tinker with all the adjustments themselves. Included among these presets are a Movie mode and a Game mode that opens up a more direct path between a connected games console and the screen to reduce response time problems. Just make sure you avoid the far-too-aggressive Dynamic preset option.


As I start testing the 37RV555D’s performance, I’m unfortunately struck right away by some unlucky timing on Toshiba’s part. For its latest TV arrives hot on the heels of two excellent offerings from Sony and Panasonic, and it has to be said that against such estimable rivals, the 37RV555D doesn’t do quite enough. 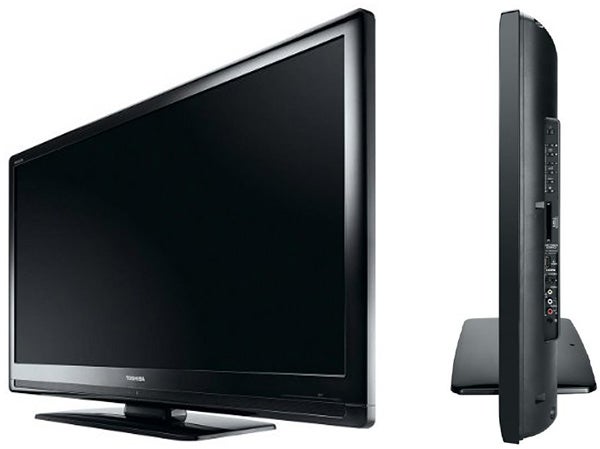 When it comes to pictures, there are three main reasons why the 37RV555D doesn’t keep up with our recent TV Joneses. First, despite carrying 100Hz processing the set tends to suffer a little with motion blur, robbing even HD images of a little clarity whenever there’s any significant amount of motion going on.


The second problem is that I don’t particularly like the 37RV555D’s contrast/brightness balance. By which I mean that while it is possible to achieve something approaching a rich, deep black colour during the dark scenes of, say, ”Iron Man” on Blu-ray, this is only possible if you really ramp down the brightness quite severely. So severely, in fact, that the picture loses the snap and attention-grabbing vibrancy usually associated with LCD technology.


The Movie preset amply proves my point here, by suggesting that Toshiba itself recognises there’s a problem with the screen’s innate black levels. For choosing the Movie mode causes the TV’s backlight output to be reduced all the way down to 30 per cent – a move which certainly takes out most of the grey misting that otherwise afflicts dark picture areas, but which also leaves the picture feeling slightly flat and uninvolving. Clearly the brief with this movie preset was to get a satisfying black level. But it’s hard to believe that whoever calibrated it wouldn’t also agree that they had to sacrifice a bit too much brightness for comfort in the process.


You can, of course, nudge the backlight and brightness levels up manually based on the Movie preset values. But the point here is that by the time you’ve increased the TV’s brightness to a point where it’s really eye-catching again, parts of the picture that should be black have started to look grey…

My final issue with the 37RV555D’s pictures is that standard definition pictures aren’t very hot. Seeing the 37RV555D so soon after Toshiba’s own 42ZV555D, with its Resolution+ processing, it’s impossible not to be struck by how much softer they look. Especially if you’ve got the set’s MPEG noise reduction system switched on, which you probably will unless you’re watching a DVD or an unusually clean Freeview broadcast.


Even compared with more ‘normal’ TVs – i.e. those without Resolution+ – I’d say the 37RV555D’s standard definition pictures are pretty average. Especially as they have a habit of making skin look a bit waxy too.


For all these moans, though, the 37RV555D still manages a score of seven for image quality. So I’d better explain why.


One significant reason is the sharpness of HD images, provided there’s not much motion going on. You can see pores, textures in clothing, individual blades of grass on football pitches – all those lovely small things in TV life that make HD so special. Also likeable is the picture’s colour tone. For aside from the occasional skin tone issue with standard definition, colours generally look quite believable and rich. 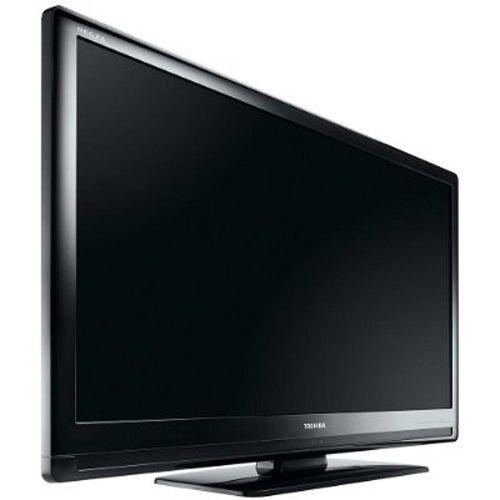 Next, while moving objects don’t look very crisp, they do at least pass across the screen quite fluidly, without judder. The set’s noise reduction routines prove quite sophisticated at reducing mosquito and MPEG blocking interference, too, and finally, whatever issues I might have with the 37RV555D’s black level response, it is at least fair to say that the set’s dynamic contrast system is both astute in its brightness-tweaking judgments and fast-reacting enough not to leave dark scenes looking unstable or flickery, as can happen with some rival dynamic contrast arrangements.


And so we come to the 37RV555D’s audio. Which is…OK. As with the 42ZV555D, it’s at its best when cranked good and loud. The reason for this is that you need to have the TV’s bass booster option switched on, for without it the sound is invariably thin and weedy. Yet with the bass booster on, the mid-range can sound cramped and muffled unless you pump up the volume and give the soundstage room to breathe.


In other words, our score of eight for the 37RV555D’s sound quality only applies if you don’t have any neighbours to worry about. If you generally have to keep volume levels low, you should knock the mark right down to a six.


The 37RV555D offers some nice specs for its money, and does some good things performance-wise too. But at the same time, given the quality of some other sets we’ve looked at recently, it’s hard to find a really convincing reason to recommend it.