Aside from Samsung’s uber-extravagant UE46C9000, we’ve consciously been trying to get into the post-Xmas, short-of-cash spirit by looking at high value TVs. And nothing appears to fit this bargain bucket bill any better than Toshiba’s 32CV711B: an LCD TV that delivers 32in of HD Ready pictures while costing under £290. And no, we haven’t made a typo there: we really have found the 32CV711B for sale at that price point.


How much the 32CV711B looks its money depends on how close you are to it. There’s no doubt that if you’ve shoved your face near to it for some reason, its overtly plasticky finish is pretty obvious. The uninspiring build quality is apparent, too, if you lift the set, as it feels almost frighteningly lightweight and flimsy. 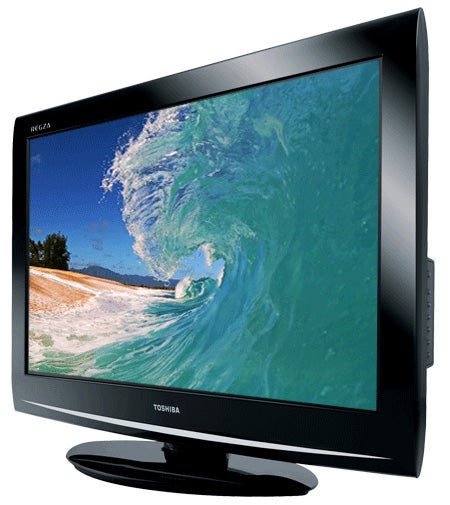 From a normal viewing distance, though, the 32CV711B doesn’t look too shabby. The black bezel finish is surprisingly glossy, the sculpting has a pleasant combination of sharp angles and subtle curves, and the little arc of grey within the bottom edge further lifts the design beyond the normal budget aesthetic.


Far less appealing, however, is the 32CV711B’s lack of a Freeview HD tuner and carriage of just a couple of HDMIs. Nearly every TV we see these days, by comparison, has at least three.


Clearly, though, the sort of person likely to buy a 32CV711B won’t be the sort of AV junky who’s got piles of HD/digital video sources all over the place. Indeed, they might well be looking at the 32CV711B as a second-room TV, where accommodating reams of sources is even less likely to be a big issue. However, while we take all this on board, we’ve been sufficiently spoiled now to still feel a little disgruntled that the 32CV711B doesn’t run to a third HDMI. So there.


Doing their best to take the edge off our ire, though, are the 32CV711B’s surprisingly ample multimedia capabilities. Unexpectedly for its money, the 32CV711B sports both a D-Sub PC port so you can double the TV up as a PC monitor, and a USB input, able to handle JPEG photo and MP3 audio files. Multimedia functionality like this really is ideal for people thinking of using the 32CV711B in a second room situation, where convenience features generally rate as more important than screen size and AV quality.

Convenience features are one thing, but the 32CV711B hasn’t abandoned all hope of delivering some decent AV quality. For starters, despite its cheapness, Toshiba hasn’t discarded its Active Vision ‘general purpose’ video processing system. The version of this processing carried by the 32CV711B inevitably isn’t as powerful as the incarnations used by sets further up Toshiba’s range. And the 32CV711B doesn’t manage to run to including Toshiba’s impressive Resolution+ system for boosting standard def resolution. But really it’s good to find any kind of serious video engine on such a cheap set.


The other picture surprise is the discovery of an extensive suite of picture adjustments, including a colour management system. And this doesn’t mean you just get basic tint or temperature adjustments; in fact you can fiddle around with the brightness, hue and saturation levels of the red, green, blue, cyan, magenta and yellow colour elements, as well as the gain balances of the RGB colour elements. 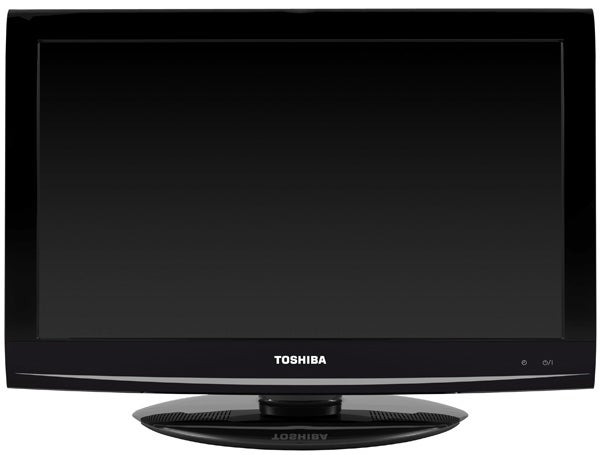 In conjunction, ideally, with a calibration disc aid, these colour management tools really can improve pictures noticeably from their out-of-the-box conditions.


This is not to say, though, that the 32CV711B’s post-calibration pictures are amazingly good or anything. The set is, after all, less than £300! But they are decent-to-likeable by the standards of other really cheap 32in TVs.


Colours are quite dynamic and vibrant, for instance, avoiding that instantly muted and off-key look still quite common with really cheap TVs. Part of this decent colour performance is down to another, more surprising strength: a respectable reproduction of black colours and dark scenes. There’s not as much grey ‘mist’ hanging over black colours as we would have expected for the set’s money, and there’s even a bit of shadow detail in evidence in all but the very darkest corners, allowing dark scenes to contain at least a little depth.


This reveals that the 32CV711 has a passable native contrast performance – despite Toshiba claiming a mere 12,000:1 contrast ratio for it. We guess this provides more proof of just how unreliable these sorts of contrast figures are, especially if you start trying to compare them across different types of flat TV and backlighting technologies.

A final strong point of the 32CV711B’s 1,366 x 768-resolution pictures finds HD pictures looking reasonably sharp and detailed. Though with this point – as with all of the 32CV711B ‘strengths’, in fact – our praise is qualified. For you can certainly get a crisper HD look if you spend more, and the 32CV711B’s sense of sharpness reduces when things in the picture start to move, on account of the traditional LCD screen issues with responding fast enough to keep up with changing pictures.


Now that we’ve started contemplating the less impressive side of the 32CV711B’s performance, we should say that the colour vibrancy noted earlier isn’t accompanied by much tonal subtlety or dynamic range. As a result, one or two tones look rather ‘plasticky’ and slightly unnatural. This is especially the case with standard definition sources – sources that also suffer more with motion blur than HD ones. 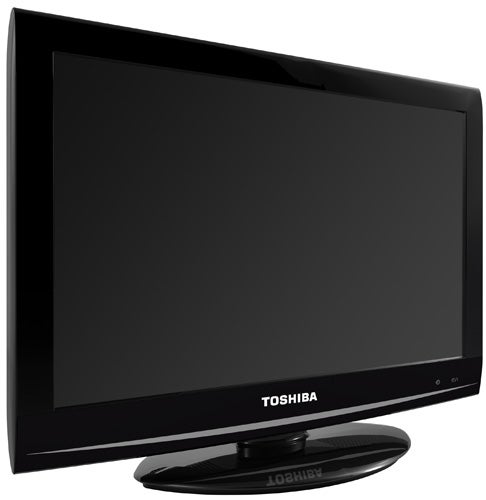 The 32CV711B additionally suffers with a very limited viewing angle, which sees contrast and colour reducing rapidly once you move beyond around 30 degrees from face-on. This is a common failing with LCD TVs, of course, as is another 32CV711B weakness: backlight inconsistency.


There are numerous patches of the picture that look a bit brighter than others during dark scenes – something that obviously can be quite distracting at times. The only good news is that the patches of backlight inconsistency are predominantly restricted to areas quite tight up to the screen’s extremities.


On balance, the 32CV711B’s pictures can be considered above average for its money. Which is more than can be said of its audio, unfortunately. For as with numerous Toshiba TVs of late, the set’s speakers are painfully underpowered. They barely cope with straightforward ‘chatshow’ style content, so you can imagine how thin, harsh and unconvincing the soundstage becomes when the TV’s showing even the most low-octane Hollywood action sequence.


The 32CV711B is better than its price point when it comes to picture quality and features, which is just about enough to make it worth considering as a cheap and cheerful TV for a bedroom or conservatory. But its fairly pitiful audio and recurring image flaws really aren’t likely to make it a satisfactory main-room TV for anyone sufficiently into their technology to be reading this website.