Toshiba’s latest range of LCD TVs has been doing well, but when it comes to digital recorders the company has never enjoyed the same level of success. Sluggish software and an unwillingness to push the boat out have left Toshiba’s DVD/HDD combis trailing behind slick, user-friendly machines from the likes of Panasonic, Sony and Pioneer.


But like a true champ, Toshiba has taken the criticism on board and at its preview back in February the company claimed to have put things right with its latest range, which includes the RD-98DT DVD/HDD recorder. It’s the replacement for last year’s RD-97DT and we’ve been dying to get our hands on it to see if these improvements really do make a difference.

Aesthetically it looks exactly the same as the RD-97DT, with an additional DVB logo on the fascia being the only way of telling them apart. However, this isn’t a bad thing, as the sleek black and silver styling works extremely well, giving the unit a hi-tech vibe that perfectly compliments the company’s gorgeous flat-panel TVs. It’s also surprisingly slim compared to most of its rivals.


Toshiba hasn’t overburdened the fascia with buttons, providing just play, stop, record and keys for switching between the hard-disk and DVD. There’s also a tiny info display and a small flap on the right that hides a selection of AV inputs, including DV, S-video, composite and stereo audio. Like the RD-97DT this unit lacks USB ports or card slots for playing media files stored on your PC, which isn’t essential but is a handy feature that comes as standard on most of Toshiba’s big-name rivals.

Taking centre stage on the rear panel is an HDMI output, and thanks to the unit’s built-in video upscaling you can send 576p, 720p, 1080i and 1080p to a compatible display (and you even get an HDMI lead in the box) but those who prefer to keep it analogue can use the progressive scan capable component or RGB SCART outputs. The coaxial digital and analogue stereo audio outputs let you hook the unit up to your AV receiver, though the addition of an optical output may have made life easier if you have other kit fighting over your coaxial inputs. You can use the SCART input to make recordings from external TV receivers and the Satellite Link feature starts the unit recording when it detects an incoming signal. However, because the input doesn’t support RGB (as indicated by the tizzing, noisy edges of our Sky HD feed), recordings don’t look as good as they do from the internal Freeview tuner.

Now for the vital statistics. The hard-disk capacity is 250GB, which offers up to 424 hours of recording time on the hard-disk, but you’ll only get that if you record everything in the lowest quality SLP recording mode. Using recording modes with higher bitrates improves the picture quality but eats up more space, although with 53 hours available in the best quality XP mode, you probably won’t need to change modes very often. In between XP and SLP are three other modes – SP, LP and EP – which offer 106, 212 and 318 hours on the hard disk respectively.

The presence of a built-in DVD drive means you can record directly onto DVD, or copy hard-disk recordings onto disc at up to 32x normal speed. The unit supports DVD-RW/-R and DVD+RW/+R, which is enough to earn it the ‘multi-format’ tag but not in the truest sense as it lacks DVD-RAM, DVD-R (DL) and DVD+R (DL) recording. With a hard-disk on board, the lack of RAM is no big deal, but the absence of dual-layer recording means you can only fit a maximum of one hour onto a write-once DVD in XP mode (as opposed to almost two).


One of the most significant additions to Toshiba’s new recorder range is Freeview Playback, which means the RD-98DT sports a digital tuner and can record an entire series after setting the timer once; automatically record split programmes and make suggestions when timer events clash. The process of recording a series initially seems more convoluted than most recorders but unusually it shows you a list of the next six episodes that will be recorded, which is a useful tool. There’s also an analogue tuner on board, but you can’t watch one tuner while recording on another.

There are loads of recording and editing features on board. Recordings stored in the Title List menu are displayed with a moving thumbnail, alongside all the relevant details including whether the recording is new. Select a title and you’re presented with a list of editing options, which allow you to delete a scene, add chapter markers, divide/combine titles or change the name. For recordings made on the hard-disk or a DVD-RW (VR mode), you can add titles to a separate playlist and watch them back in the order of your choosing. DVD+RW recording is more limited, allowing you to hide chapters instead of deleting a section completely.


The unit also performs the usual collection of hard-disk tricks, such as pausing live TV (using the Time Slip button), simultaneous recording/playback, and the ability to watch a programme from the start while it’s still being recorded. If you’re using pause live TV, however, it’s worth bearing in mind that the time-delayed pictures are displayed in the current recording mode, so unless XP or SP is selected, the picture quality will be reduced.


In terms of multimedia support, the RD-98DT isn’t one of the more sophisticated machines on the market. Unlike its media centre-mimicking rivals, the RD-98DT doesn’t let you to store music, photos or video on the hard-disk, limiting MP3, JPEG and DivX playback to DVD and CDs only. Combined with the lack of USB ports and lack of WMA support, this is not the recorder to buy if you want to bring your media library into the living room.


But on a more positive note, we’re impressed by the improvements to the operating system that make the RD-98DT much easier to use than its predecessor. You can move through setup menu options quickly and channel changing is a lot faster too, all of which results in a slicker and less frustrating user experience.

The pastel-coloured onscreen menus are easy on the eye and simple to digest, particularly the no-nonsense setup menu that thankfully isn’t overburdened with unnecessary submenus. The EPG is similarly neat and tidy, cramming in a lot of information without looking cluttered. You can switch between daily and weekly views and use the remote’s colour-coded keys to view series details or set the timer.


The RD-97DT’s remote hasn’t been improved however, which means there are still banks of similar-looking buttons and the programme change keys aren’t obvious enough. That said, the well-placed central controls allow for intuitive menu navigation, and the dedicated HDMI resolution and recording mode buttons are handy. 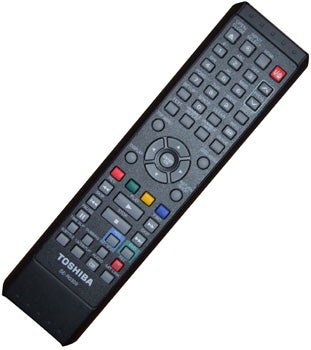 If you plan to use the RD-98DT to watch digital TV, then live Freeview picture quality is excellent, particularly when upscaled to 1080p and viewed on a Full HD TV. Colours are rich and natural looking, edge-definition is razor-sharp and fine detail is crisply reproduced. There’s no escaping the shimmering pixel noise that surrounds moving objects and blights camera pans – an unfortunate part of the Freeview experience, we’re afraid – but on the whole pictures are highly watchable.


When recorded onto the hard-disk in XP mode the results are impressive, keeping colour and detail levels the same as the live broadcast without increasing the amount of noise. SP pictures look a little twitchier but the difference is almost imperceptible. In LP there’s a big drop in picture quality, with the image suddenly looking blurry and alive with noise – much more so than Panasonic’s LP mode. And the EP and SLP modes make the picture look like a YouTube clip blown up on a big screen, so they’re best avoided unless you’re desperate.

The great work in the picture department continues with pre-recorded DVD playback. The kaleidoscopic colour palette and busy intergalactic landscapes of ”The Fifth Element” look utterly gorgeous through the RD-98DT’s HDMI output, thanks to the sharp detail reproduction, vibrant colours and artefact-free upscaling. It’s backed up by top-notch Dolby Digital playback (delivered as a bitstream via HDMI).


MP3, JPEG and DivX playback is also highly enjoyable, but as we’ve grown used to playing them directly from the hard-disk or bunging in a USB stick, loading up discs felt like a slight imposition (lazy though it may sound).


The RD-98DT is a very competent combi recorder that demonstrates a huge improvement over previous versions. The unit is a lot more responsive, the onscreen design is more accessible and the addition of Freeview Playback takes the hassle out of everyday TV recording. What’s more, its 1080p upscaling, useful recording/editing features and excellent picture quality make it a terrific all-rounder.


But even though Toshiba’s improvements have paid off, the RD-98DT still suffers by comparison to its more sophisticated rivals from Pioneer, Panasonic and Philips, which offer HDD media centre functionality, dual-layer recording and USB ports – none of which you’ll find on the Toshiba. Perhaps next year we’ll get the all-singing, all-dancing Toshiba recorder that we’ve been waiting for.