It’s been a while since we looked at one of Toshiba’s Qosmio laptops. In fact the last one was the G50-115 way back in 2008. That machine was let down by a poor screen and Toshiba’s reluctance to embrace Blu-ray, making the high price tag difficult to stomach. Toshiba appears to have seen the error of its ways in the Qosmio X500-10T that, among other things, boasts a Blu-ray writer drive. 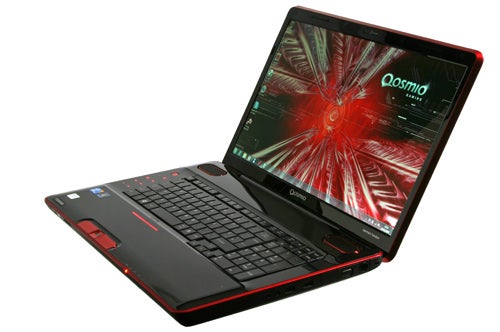 In terms of specifications it certainly grabs the attention, which it should considering you’ll have to cough up £1,600 for the privilege of owning it. For this you get highlights such as an Intel Core i7 Mobile processor, an nVidia GeForce 200-series mobile graphics chip, 8GB of RAM, 1TB-worth of hard disk space and a 18.4in Full HD screen to display those Blu-rays on, which is an impressive list for the money.


Being part of the X500 range marks this machine as one intended for high definition entertainment and gaming. This explains the more garish design, with Toshiba’s now ubiquitous pinstripe patterns joined by red highlights around the lid, the body and on selected items such as the speakers and touchpad buttons. This won’t be to everyone’s taste and the X500 certainly divided opinion in the office, but to Toshiba’s credit this model is an improvement on the outrageous X300 that preceded it and is more subdued than many competing offerings. Toshiba’s insistence on glossy interior finishes is less praiseworthy, so you’ll constantly need to wipe away fingerprints and grease to keep the X500-10T looking at its slightly gaudy best. 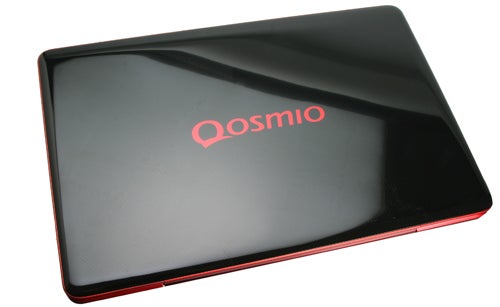 Thankfully the tile-style keyboard is semi-matte and, as we’ve come to expect from Toshiba, a pleasure to use. Key travel is shallow but well-defined, layout and spacing are ideal, and the large chassis has allowed Toshiba to add a full number pad. Best of all, the keyboard is clearly backlit in white, making it a doddle to use in the dark. It’s a bit odd, though, that Toshiba hasn’t opted for red backlighting to match that of rest of the system. 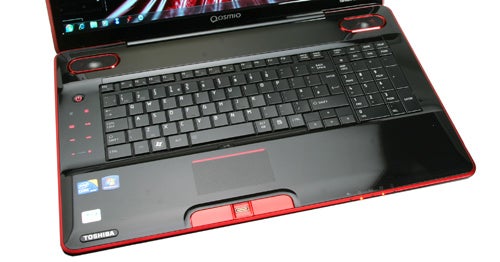 To the left of the Qosmio’s keyboard reside a physical power button and Toshiba’s standard set of touch controls, which are identical to those found on the Satellite P500 laptop. These include a green-backlit ‘Eco’ button for activating the power saving mode, as well as the usual variety of multimedia buttons – all of which are backlit in red. These touch buttons are nicely sensitive and dim briefly to indicate a successful press. They also produce a horrible loud beeping noise when touched, which thankfully can be switched off using the ‘Toshiba Assist’ software.

Below the keyboard is a small button that deactivates the touchpad and its red LED strip, though there is also a dedicated keyboard shortcut for this function. The wide aspect multi-touch touchpad itself is responsive and offers a pleasant textured surface. Its flat buttons are a major improvement over some of the convex iterations we’ve come across on older Toshiba laptops. Feedback of the left button is just right, and though the right button’s travel is uncomfortably shallow it’s hardly a big deal. There’s a fingerprint scanner nestled between them for extra security. 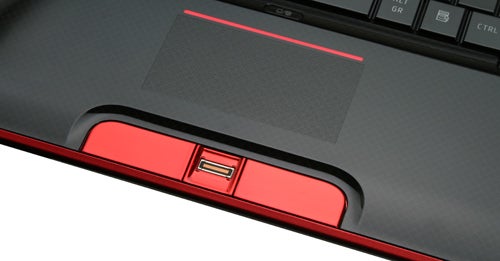 Connectivity is generous enough, with Gigabit Ethernet, a combined eSATA/USB port alongside a plain USB one, HDMI video out (supporting Regza-Link for use with Toshiba televisions), mini FireWire, and a 54mm ExpressCard slot on the left; a physical wireless switch and memory card reader on the front; and a further two USB ports, VGA video output and 3.5mm jacks for headphone/ digital audio out and microphone to the right. As we’ve touched upon the X500 also features a BD-RE drive, which writes at x6 and re-writes at x2.


Toshiba’s unique Resolution+ technology (which upscales standard definition material to the screen’s Full HD resolution) is still on hand, though given the lack of a Cell co-processor we assume this is handled by the CPU alone. Unfortunately you’ll be hard-pressed to notice the difference with the upscaling available to any Windows PC using a dedicated graphics card.

While on the topic of high definition, the X500-10T’s 18.4in screen, with its 1,920 x 1,080 resolution, will certainly do Blu-rays and games as much justice as you can expect from a laptop display. Crucially, it improves on the poor viewing angles and contrast shift that noticeably affected the Satellite P500 screen. Though very far from what you would get on a high-end desktop monitor like the new Dell UltraSharp U2410, horizontal viewing angles are good enough that you can enjoy a film with some friends. 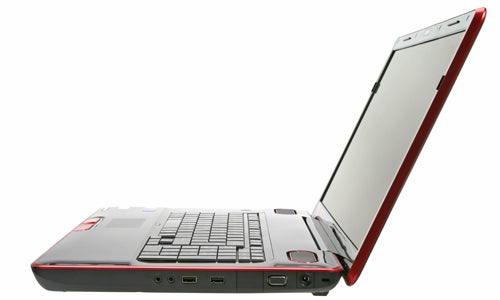 Colours are bright and vibrant, helped by the screen’s glossy coating. Sharpness is excellent and there is very little sign of backlight inconsistency or banding. Inevitably greyscale performance is patchy, but Toshiba has sensibly (for an entertainment-focused machine) configured the panel to prioritise dark detailing over white saturation – so while you’ll miss subtleties in bright scenes, at least you’ll have a good chance of spotting that monster hiding in the shadows. Overall, it’s one of the better 18.4in laptop screens we’ve come across.

We’ve learned to expect great things from the Harman/kardon speakers Toshiba laptops generally use, and the Qosmio X500-10T is no exception. Trebles are clear and defined, bass comes across with plenty of oomph, and overall the sound-stage just feels deeper and richer than most laptops can manage.


So far, as long as you can get past the design this Qosmio gets everything right, but it’s when we get to the internals that things get really interesting. As mentioned it uses one of the new Intel Core i7 mobile processors, specifically the 1.6GHz 720QM. Although this is the slowest mobile i7 chip available, as we saw in our review of the Novatech X70 CA Pro it performs like a champion, easily besting the most expensive Core 2 Extreme processors the previous generation offered due to the Turbo Boost technology that allows is to run at up to 2.8GHz. 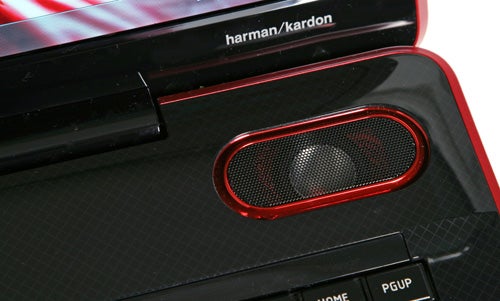 While most high-end laptops come with a maximum of 4GB of RAM, the X500-10T throws in a whopping 8GB of 1,066MHz DDR3 memory, meaning this is one area that’s pretty much as future-proof as a laptop is going to get. Currently, 8GB should be plenty for even the most demanding tasks, and overkill for most games.


Not to be outdone in permanent storage, Toshiba backs this with twin 500GB hard drives giving you 1TB of space, which in laptop land is pretty much as good as it gets. Additionally, both drives are protected by Toshiba’s 3D Impact Sensor, which among other measures parks the drive heads if it detects a fall or shock. Unfortunately, unlike the similar twin 500GB setup found in the Asus G60J, the drives here spin at 5,400rpm rather than 7,200rpm. It’s not a huge deal, but it does seem a little incongruous considering how high-end the rest of the system has so far been. 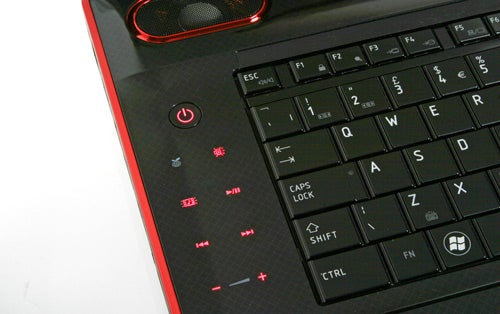 More surprising is the relatively poor nVidia video card Toshiba has chosen to use. Again, this is only relative to the rest of the system’s specifications, but for any machine claiming to offer “Premium gaming power and performance” we would have expected at least an nVidia GTX 260M rather than the 1GB GTS 250M provided here. You can forget about running Crysis with any decent detail levels at the screen’s native resolution, for example.


Its impact is not as dramatic in older or less demanding titles, with Call of Duty 4 running at a perfectly smooth 38.5fps average on 1,920 x 1,080 with detail turned up to maximum. Just to put this into context with desktop gaming performance though, the £600 CyberPower Infinity i5 Hercules SE manages 88fps under the same conditions, showing just how much of a premium mobile gaming demands. Back to laptop comparisons, at the Asus G60J’s native 1,366 x 768 resolution its GTX 260M gave 75fps where the Toshiba’s GTS 250 provides 60.4fps.

Of course the card handles HD video processing perfectly, but then so would the cheapest integrated nVidia chip available. The only other benefit to the GTS 250M are its increased CUDA abilities, though these have a narrow appeal. Elsewhere the X500-10T continues its comprehensive feature set though, with an HD (1,280 x 800) webcam being an unusual highlight. Wireless connectivity, meanwhile, is provided by both Wireless-N Wi-Fi and Bluetooth 2.1 with EDR.

As you would expect, at 4.6kg this desktop replacement pushes the boundaries of portability, yet its streamlined chassis makes it look less bulky than most gaming laptops. Battery life also suffers from the high specifications and twin hard drives, though the high-capacity 87Wh battery still managed to last an impressive one hour and 45minutes in MobileMark’s intensive DVD test (with screen brightness at 100 per cent). Unfortunately the Productivity battery benchmark failed to complete, but suffice to say this Toshiba performs surprisingly well away from a socket.


Finally we come to value, and here the Qosmio X500-10T fails to really impress. Interestingly, this is not because it’s bad value for what you’re getting, but because for an extra £100 you can buy Toshiba’s almost identical Qosmio X500-116 sporting an nVidia GeForce GTS 360M rather than the weaker GTS 250M. When you’re spending this much already, that seems like a decent investment. 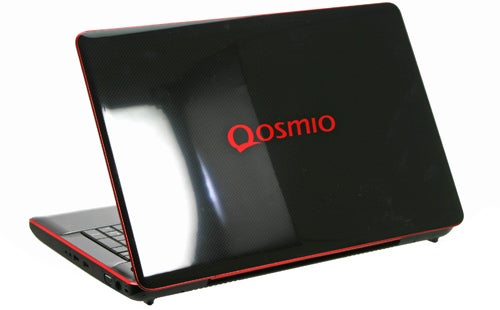 If you’re a gamer rather than power user it’s also worth checking out gaming laptops from competitors at the £1,600 price mark. While you may not get some of the more niche features of the X500-10T, such as the Blu-ray writer drive, 8GB of RAM and twin hard drives, you will get a machine with a far more capable graphics card that’ll ultimately be better for games.


A word of warning though: many of these use a Clevo chassis with which we’ve had issues in the past. Toshiba’s build quality, on the other hand, is excellent, and the Qosmio’s screen and speakers are also on another level. It’s also worth considering the Asus G60J, which costs the same and has similar features, but performs a little better in games thanks in part to its screen’s lower resolution. 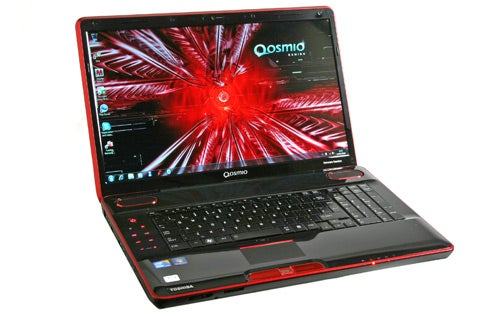 
A well-built and (generally) incredibly well-specified powerhouse of a system, the Toshiba Qosmio X500-10T is let down by Toshiba’s obsession with glossy plastic finishes and a surprisingly weak graphics card. However, if you can manage an extra £100, the next model up somewhat remedies this latter issue, making it the better option.

The Toshiba is clearly hampered in this artificial benchmark by its slow hard drives, though beyond the faster graphics we’re at a bit of a loss to explain the Asus’ relatively dramatic lead here.

(centre)In Stalker it becomes obvious just how much the Toshiba’s GTS 250 looses out to the Asus’ GTX 260.(/centre)