Just over a year ago I took a look at the Qosmio G20 102 – Toshiba’s top of the range all-in-one-multimedia notebook. Now the G30 has arrived and it’s in many ways a better machine – it’s good to see progress as work. It’s £100 more expensive than last year’s effort but if you’re willing to spend the best part of two grand on a notebook then it’s hardly worth fussing over, especially as you’re getting a lot more for your money than last time. If you do feel the need to spend more, then there’s the G30-201 – a variant with a faster CPU and twice the hard disk capacity, available for £2,100. 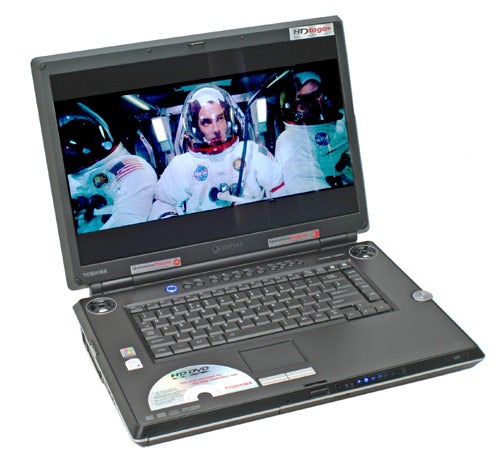 The G30 is a big ‘ol machine and at 4.8Kg it’s actually heavier than the last version. The dimensions when closed are 406 x 285 x 43.1 mm – pretty big. It’s chunkiness is its most noticeable dimension. It’s only sensible to consider it as a permanent, or at least one rarely moved installation. Despite its bulk there’s a very large external power supply trailing from the rear.


Considering its size, the Toshiba is not surprisingly very imposing even when closed, with a very large silver lid with the Qosmio logo etched onto it. Open it up and you’ll find a black brushed metal chassis round the keyboard with an array of buttons running across its top edge. The construction is actually less swish than the G20, which had the buttons as incorporated into the chassis itself and illuminated from underneath. It might not be as cool but the actual buttons are easier to use. The left button is the power switch and has the obligatory blue light surround. Next to this is one that launches Windows Media Center directly, while the one to the right launches the software that gives access to the G30’s star attraction – the HD DVD drive. 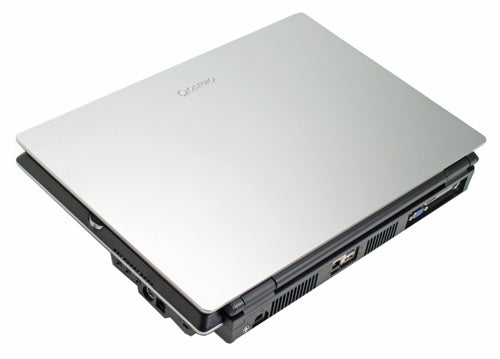 While we’ve seen Blu-ray in two desktop systems so far, Toshiba has launched first in the UK with HD DVD notebooks. The drive is located at the front, which gives it more of a consumer electronics feeling. Flicking through the HD DVD paper guide included I must admit that my eyebrows were raised by a couple of items. Firstly there was a paragraph stating that for “uninterrupted enjoyment of HD DVD” it is necessary to connect the system to the Internet at unspecified intervals in order to renew the digital AACS key that is the copy protection employed on the format. So, if you choose not to go online with your machine you could find that your HD DVD drive won’t play back movies – a great opportunity to really upset people. My favourite line though was, “Frame dropping, audio skipping or out of sync audio and video may occur during playback of some HD DVD Video titles”. Great. Implying that merely by telling us that we might get an awful experience makes it all alright.


While this might not exactly inspire confidence, I can at least report that our Apollo 13 test disc played back smoothly both when the notebook was plugged in and when disconnected from the mains. I also unplugged while playing and it continued without a hitch – only the display dimmed. Playback has to be done through Toshiba’s own HD DVD software, which is pretty good with a clean and uncluttered look. Being able to access the menus while the movie is playing is a nice touch and another tangible benefit over DVD.

Image quality was boosted by the fact that the G30’s 17in display features full 1,920 x 1,200 resolution, enabling you to see the full resolution from HD DVD. The high contrast coating is perfect for watching movies on and for games too, though the usual bugbear of reflections will cause an issue under fluorescent lights and will require the screen to be angled. There is some colour shift when viewing from the sides but it’s watchable. The drive can also read and burn any flavour of both DVD and CD, which is great news but unfortunately it won’t burn any HD DVD discs – a shame when both the Blu-ray drives we’ve seen in systems have been recordable. 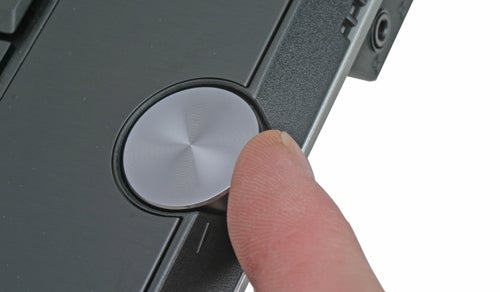 Carrying on with the buttons on the top of the display are Play/Pause, Stop and Skip buttons for use while the Toshiba HD DVD software is running. There are hardware buttons for increasing or lowering screen brightness and to the right of this is a button that’s labelled Dolby. This gives direct access to one of the best features of the notebook. The SigmaTel Audio chip features Dolby Home Theatre certification, which you can learn more about here. From this interface you can activate Dolby Headphone, which adds spacialisation effects to stereo sources.


I played around with this for a while and it does make an impact adding and a sense of depth space to the sound. While standard stereo is left to right this adds a sense of forward and back. You can also add Pro Logic II effects and a virtual speaker mode for a 5.1 effect from headphones. I kept the Dolby Headphone feature on most of the time but sometimes you might prefer to turn it off and having access to this quickly via a hardware button is a great touch. It really makes this feel very much like an entertainment machine. Finally, at the right is a button to enable the TV Out. 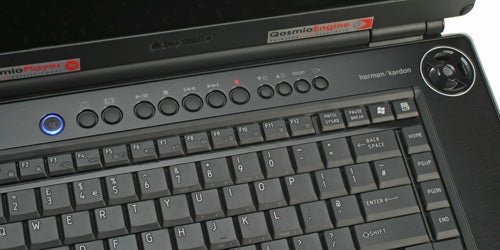 The large size of the notebook makes typing on the Toshiba a real pleasure – the keys are full size and are very firm with no dodgy flex. The trackpad is a tad small and the buttons beneath it do look a bit cheap but they feel OK to use. The Delete key however has been shifted to the bottom row while the Windows key has been moved from bottom left to top right. The space bar is smaller than normal but that didn’t cause a problem. If you need to work on text, the higher resolution on a relatively small screen could be a problem so pressing the Function key and space bar lets you easily switch between resolutions.


Another very nice touch is the volume dial on the right hand side. This works in every application and is very easy and convenient to use, with an on screen indicator of the sound level. The speakers are provided by Harmon Kardon and are located underneath different looking spoked grilles. They volume is quite loud and it’s fine when you’re sitting in front of the system.

As an AV machine, there’s a wealth of connectivity. At the front you’ll find a switch to turn the Wi-Fi on or off and the infra-red receiver is located there. This picks up the signals from the supplied remote, an improvement over last years model that required an external dongle. The remote is a customised Windows Media affair which looks better than the standard one.


On the right there’s actually an S-Video in port, and two sockets for an infra-red transmitters to control an external set-top box. There’s a small port for composite in, available via a supplied adaptor.

On the left there are two USB 2.0 ports, two PC Card slots, a mini FireWire port, and line out, SP/DIF out and a headphone jack while at the rear you’ll find an Gigabit Ethernet LAN port, another two USB 2.0 ports and an HDMI socket. S-Video out is also located are the rear as is the connector for the combined analogue/digital TV Tuner. This proved to be off excellent quality picking up a record 73 Freeview channels from the TrustedReviews office aerial, though many of these are radio stations. Scanning took only a few minutes and best of all picture quality was as good as it gets from Freeview.


All of this is powered by a Powerful Core 2 Duo processor – a T7200. This is two cores running at 2GHz with 4MB of Level 2 cache. Pretty impressive. There’s a healthy 2GB of RAM supplied and also two hard discs – both 100GB. These are only 5,400rpm but didn’t feel slow thanks to being set up in RAID 0 configuration. However, this does mean that you have two points of potential failure for your data. If you want more security you can set it up and RAID 1 mirroring but you’ll halve your capacity.


Graphics are handled by a decent GeForce Go 7600. It doesn’t qualify this as an all out gaming machine but you’ll be able to play recent games, though you’ll struggle to do so at the screen’s native resolution, as you can see from our testing.


Software supplied includes Norton Internet Security, Microsoft Works and Microsoft One Note. Office is supplied only as a trial.

As a whole the Toshiba is an impressive machine. Its feature list and choice of components is good but what raises it up is its integration. It really does feel like an entertainment powerhouse. The only omission is an integrated twin digital tuner. A greater problem is that there is some degree of gambling on HD DVD as a format that will still be here in a couple of years. You can always change the drive in a desktop PC, but you’ll be stuck with it in a notebook. It’s also not bad value considering that Sony and Hi-Grade are asking for the same or more for their Blu-ray media centres without a display.


Packed to the gills with connectivity and features, the Qosmio is a true entertainment powerhouse. It’s powerful enough for work and play, while HD DVDs looks great on its 1,920 x 1,200 resolution screen. It’s expensive, but this could be all the computer you need. 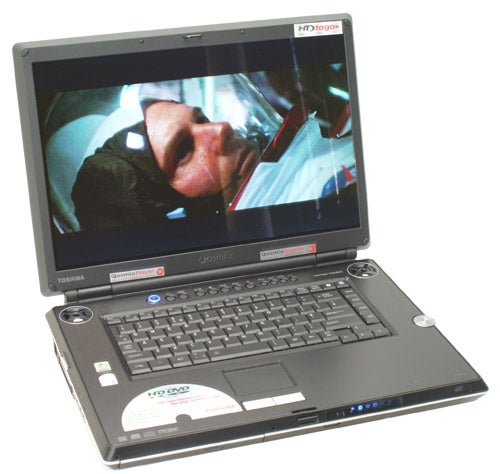