Toshiba’s Qosmio range is set up for entertainment and the G20 stands at its head. With a large widescreen display and running Microsoft’s Windows Media Center 2005, Toshiba has pretty much thrown the kitchen sink at this thing in an effort to ensure that it can act as a full-on digital hub.


However, it’s not going to win any prizes for portability. This is a big heavy machine and weighs in at 4.3Kg and that’s without they external power brick. Certainly you’re not going to want to move it very often. 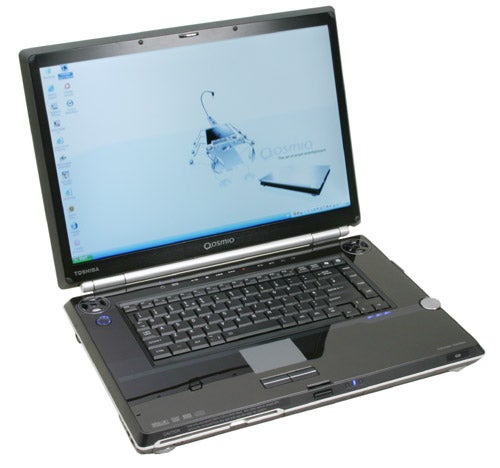 As an entertainment machine it’s important that it looks good and Toshiba has done well here. With the lid closed the silver finish and the Qosmio logo adorn the otherwise featureless expanse that is the lid cover. Surrounding the eye catching 16:10 17in display is a brown brushed metal bezel, while around the keyboard, is shiny plastic enhanced by blue lights in all the right places. The effect is somewhat spolit however, by its tendency to pick up fingerprints, so you’ll have to spent time on regular grooming. No surprise that a cleaning cloth is supplied.


Toshiba uses what it calls a TruBrite coating. This ensures that the screen is exceptionally bright with colours virtually leaping off the screen. In fact, I found that the maximum brightness setting made things look a tad washed out and I had turn it down a notch for optimum results. Set-up correctly though and viewing video and images on the Qosmio is a pleasure. 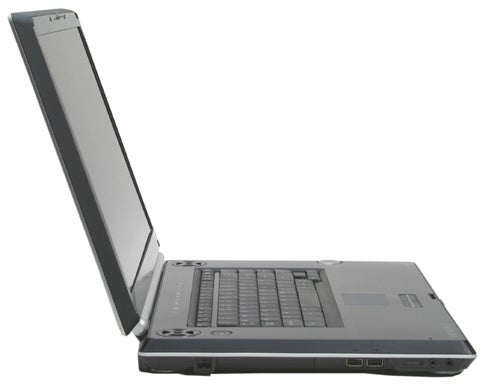 A major downside to the TruBrite coating is that it suffers from higher reflectivity that standard screens, which does bother some people. However, writing this review on the Qosmio under office lights was not a problem – I simply had to angle the screen to lessen reflections. In my opinion the benefits of the TruBrite coating outweigh the reflectivity problems, which you can get round by adjusting the angle slightly. You won’t have too much scope for this however, as vertical viewing angles weren’t that impressive, with the screen washing out when the screen was tilted too far forward or back. There was some colour shift when viewing from the sides but nothing too drastic, so you can get three or four people sitting round comfortably.

Another disappointment is that the 1,440 x 900 resolution isn’t as high as I would have liked for a screen this size. It’s high enough for 720p High Definition content but not for 1080p. Ok, so 1080p content from a Blu-ray drive is still some time away but there are plenty of 1080p movie trailers available online already, and you won’t be able to watch these at native resolution on this screen and that’s a shame.


The notebook is powered by a Pentium M 760 at 2GHz, and 1GB of memory. This is beefy enough for 720p high definition content, but not the 1080p Apple Quicktime trailer of Serenity. It played the file, but dropped frames. 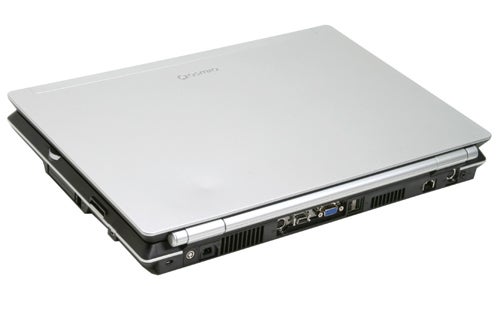 Graphics wise the machine is supplied by an nVidia GeForce Go 6600. This makes is something of a lukewarm proposition for gamers. If it were truly to be a one stop entertainment machine then a GeForce Go 7800 would not have been out of place, though obviously the machine would have been a lot more expensive. The chip does at least support PureVideo, which should improve MPEG2 playback and quality but the codec wasn’t pre-installed on the machine so it will be an extra cost.


This machine is higher specced than many of the G20s available online with two 80GB hard disk drives. By default this is set up as two partitions, a C and a D drive. However, these disks can be converted into a mirrored RAID, by the click of a couple of buttons, thanks to a Toshiba software utility. This is a great option to have and makes a lot of sense. This machine is likely to be used for both work and entertainment and having the reliability of RAID 1 in a notebook will bring peace of mind. Admittedly it means that your storage capacity is chopped in half but you can always add more space for non crucial content via an external drive. 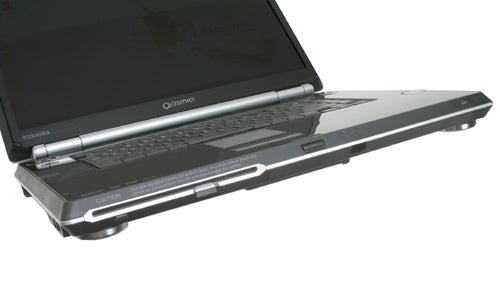 The optical drive is a rather cool looking slot loading DVD-RAM drive, giving you more options for removable storage including dual-layer discs. Sonic RecordNow! is the supplied burning software.

In terms of connectivity the G20 features two USB ports on the left side and a further two at the rear. Also on the left side are headphone and microphone sockets and a switch for activating the built in 54g wireless. Towards the back there’s a modem port for when there’s no broadband connection and your desperate to get online. On the right hand side, is a slot for both a PC Card and the newer Express card format and above that a memory card reader for SD, XD and Memory Stick. There’s also a small four-pin FireWire connector.

At the rear of the machine, along with the two USB ports already mentioned is a network connector and also a VGA output. Next to this is a proprietary digital output and a cable is supplied that ends in a SCART adaptor. I was initially quite pleased by this as it meant that I could connect the system up to my 36in CRT TV. However, when I did so I was disappointed to find that the image quality was quite simply terrible. It was clearly a composite only output but even so, it was poor, which was a shame.


As a Media Center machine there’s an integrated TV Tuner. The one included was analogue only but I was informed that models released in a month or so will have a digital tuner so it’s probably worth waiting for them. With analogue picture quality is dependant on reception but you can’t receive proper widescreen broadcasts over analogue. 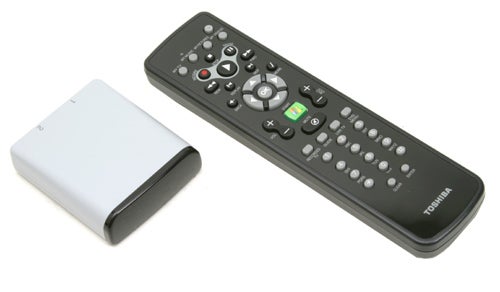 If you want to use a set-top box you can provide a picture via the composite and S-Video inputs. The supplied USB dongle receiver comes with IR extenders so MCE can change channel on your Sky or Cable box. The USB dongle for the remote is smaller and slightly smarter than the standard OEM one but it’s seems like a missed opportunity not to have integrated it into the notebook. The remote itself has been smartened up a little and adds direct buttons to the ‘My’ folders, such as My Videos.

The keyboard is quite good but I would have liked a slightly firmer feel to the keys and I sometimes caught the edges while typing. The size of the machine means that there’s room for arrow keys but the Windows key has been moved to the top right, which takes some getting used to. A function key provides quick access to the usual function such as screen brightness and TV output but above this are actual hardware buttons for direct access to Media Center. You don’t even have to have the MCE shell running – all you have to do is press the music button and it will launch automatically. Sound wise the Qosmio G20 has Harman Kardon speakers located in each corner. Instead of a mesh grille the driver is clearly visible through the spoked cover. The integrated speakers go very loud and sound is very impressive for a notebook. The virtual sound option, surprisingly, actually made a difference producing a more spacious sound and I kept it on by preference. 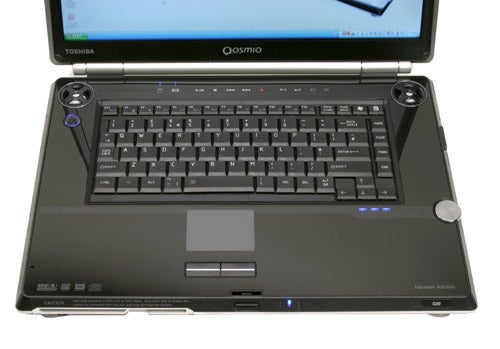 Of course you’ll get an improvement with higher quality external speakers but this should do for watching a movie. The volume control is a dial integrated into the chassis on the right hand side with blue lights to indicate the level. Very cool.


There’s no doubt that the Qosmio G20 is very impressive machine, both in girth and specification. It’s nicely put together and is a great advert for Microsoft’s Media Center. However, it’s not quite the outstanding machine that it could have been. A higher resolution screen would have been desirable, but the lack of a digital TV tuner as standard and the poor quality TV Out are major black marks. Despite these flaws it could still do very well as a desktop PC, DVD and TV replacement. As it’s sold in Dixons you can actually go in and try one and see how it suites.


Flawed in certain respects this is still a very good Media Center machine and well worth auditioning down at your local Dixons emporium.