Toshiba has revealed a new gaming laptop in its top-end Qosmio range. The Toshiba Qosmio X870 is a 17.3in notebook with powerful innards, and most likely a price to match.

Like many a gaming laptop, the Toshiba Qosmio X870 tries to stand out a little in its design. Its lid and keyboard surround are topped with aluminium and are decked-out in a dark blue. One shade is rarely enough for gaming lappys, though, and its sides are red to give that extra design loudness. The model we saw used a pitted, textured finish, increasing grip and lowering the visibility of fingerprints. It’s not the most attractive finish around, but reinforces the laptop’s design personality further. And it’s less likely to offend than the gradient finish of the previous X770 model. 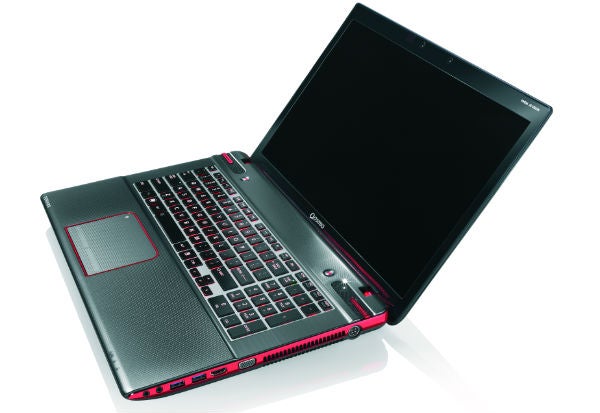 Thanks to the aluminium finish, the body feels strong and rigid, but this isn’t a laptop to take out and about with you. It’s not light. But then, gaming devices like this rarely are.

Toshiba was showing-off a laptop range rather than a specific device, and all we could wring out of Toshiba’s spokespeople was that they would feature Intel processors and NVIDIA graphics chips. We expect Core i7 chips and at least mid-range laptop GPUs will be the norm for this range.

The Toshiba Qosmio X870 comes with either a 2TB hard drive or hybrid SSD setup for faster booting and both Blu-ray and DVD multiwriter optical drives are options. As a relatively high-cost device, it’s good to see it use a Full HD 17.3in display. It boasts a claimed 5ms response time (no word on whether that’s grey-ro-grey, but it probably is) for better gaming. The screen is glossy and 3D-ready, powered by NVIDIA’s processors inside, and the X870 will come bundled with two pairs of active 3D glasses to get you started. 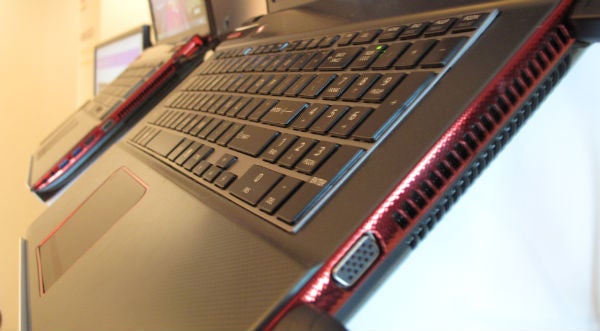 Other high-end trim elements include the backlit keyboard, which uses red-tinged lighting to blast away any “but this is just a normal laptop, right?” doubts, and a light-up logo on the Qosmio X870’s lid.  The keyboard uses standard chiclet keys, and the 17.3in form factor gives plenty of room for the Qwerty layout to spread out comfortably. The action was reasonably well-defined but unremarkable from first impressions, but we’ll be back with more in the full review.

The trackpad is more noteworthy. It’s very large and uses a clickpad design, where the mouse buttons are built into the trackpad, removing the need for discrete buttons. It uses similar texturing to the keyboard surround, providing a high-friction – but not exactly smooth – surface. 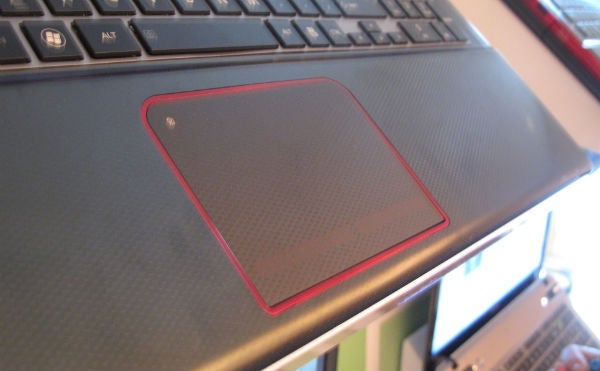 Toshiba was also keen to big-up the Qosmio X870’s audio capabilities. It uses four Harman Kardon drivers, jammed under the screen. In the demo, the laptop appeared to be able to reach decent volumes without distortion, but bass was, as is the standard, fairly meagre. You can plug an MP3 player into the laptop and use the speakers even when the thing’s off – a neat addition. You can also charge devices using the two charge-ready USB ports when the device is off, which often needs to be enabled with a software tweak. 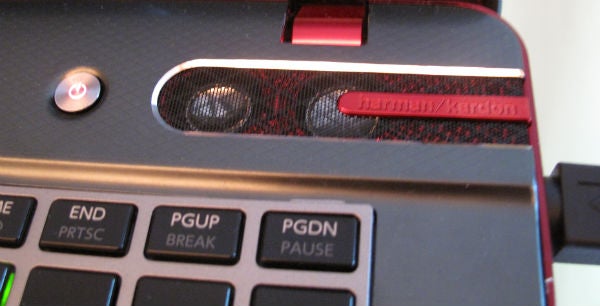 Connectivity is as solid as we’d expect from a fairly chunky 17.3in gaming laptop. On its left edge are two USB 3.0 ports, a Gigabit Ethernet socket and the optical drive. On the right are two more USB 3.0 ports – no slow-poke 2.0 sockets here – HDMI and VGA video outputs, a pair of 3.5mm audio jacks (inc mic) and the power socket. You also can’t fail to miss the great big fan grill. We’ll be back with more on how noisy the Toshiba Qosimo X870 gets under strain in our review.

Without full pricing details, it’s tricky to guess at how the Toshiba Qosmio X870 gaming rig will compare with other portable options, but it has the basics in place. Decent build, a 3D-ready screen and support for the most popular gaming components of the moment should put it on the “to watch” list of anyone looking for a games laptop.